The Princess and the Peugeot 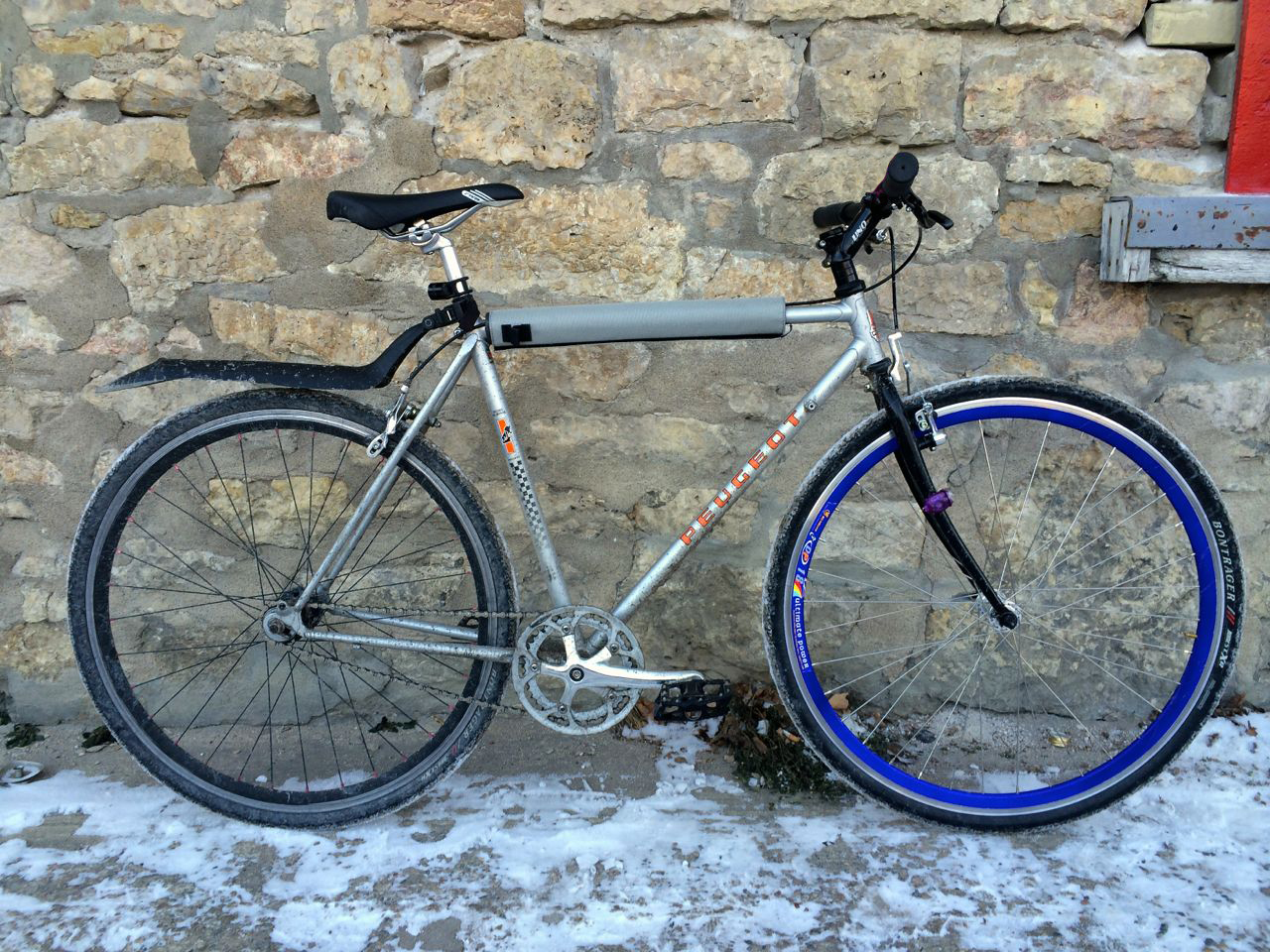 Some of you may recall a post from last year in which I had an epiphany. Or rather, an idea was thrust upon me with such conviction I decided to do something sensible. I would construct the Ultimate Commuter Bike – a bike so practical, that as I rode past, people would stop and say “Now there goes a gal who really has her shit together.”

Of course we all know how that ended. What started out as Operation Commuter Bike turned into The Guerciotti Project – a loving, time consuming and expensive restoration of an Italian Princess Bike that cannot be ridden in the rain, or anything less than perfectly Floridian conditions.

She’s pretty, but not very smart. (the bike, that is)

While I have enjoyed the Princess Bike enormously, when winter came I found myself back at square one with possibly the most first-world problem ever: all of my bikes are too nice to ride in the winter. Here, let me pass you a tissue.

And so began my quest for the Anti-Princess Bike: sensible, down and dirty, tough as hell, and fun to ride in the most miserable conditions known to man. And cheap. Like ‘way less than a divorce’ cheap. Looks were not really so important, and admittedly this was a hard one for me to swallow given my inherent attraction to beautiful and expensive things.

As I found out during the Guerciotti Project, having a good network of bike folks has many advantages. Within an hour of sending out an email explaining my dilemma, I received this photo from my friends Andrew and Graham at Natural Cycle. 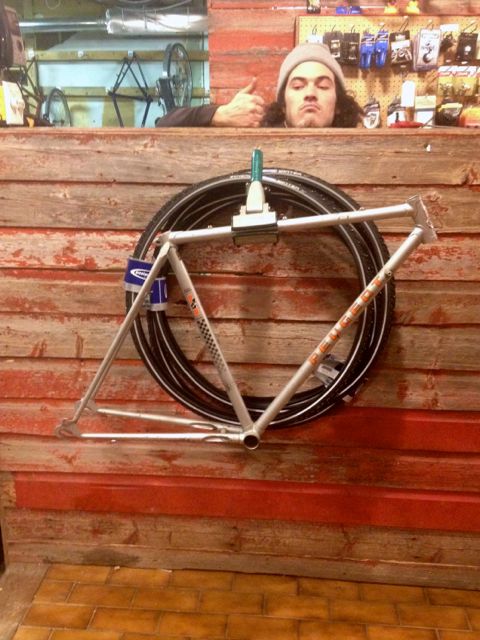 Graham and the Peugeot.

As builders of bespoke bikes for any occasion, these guys know a thing or two about putting the right bike under the right butt. Being the label queen that I am, there was no denying my inevitable attraction to this little French number. Peugeot is one of the oldest car companies in the world, with a long (albeit spotty) history of making high-performance race and luxury vehicles. They also make one hell of a pepper mill. In spite of being a little rusty and past her prime, with a some love and the right parts, I knew she would be perfect.

And she is. But let’s just say she’s a bit funny and has a GREAT personality. 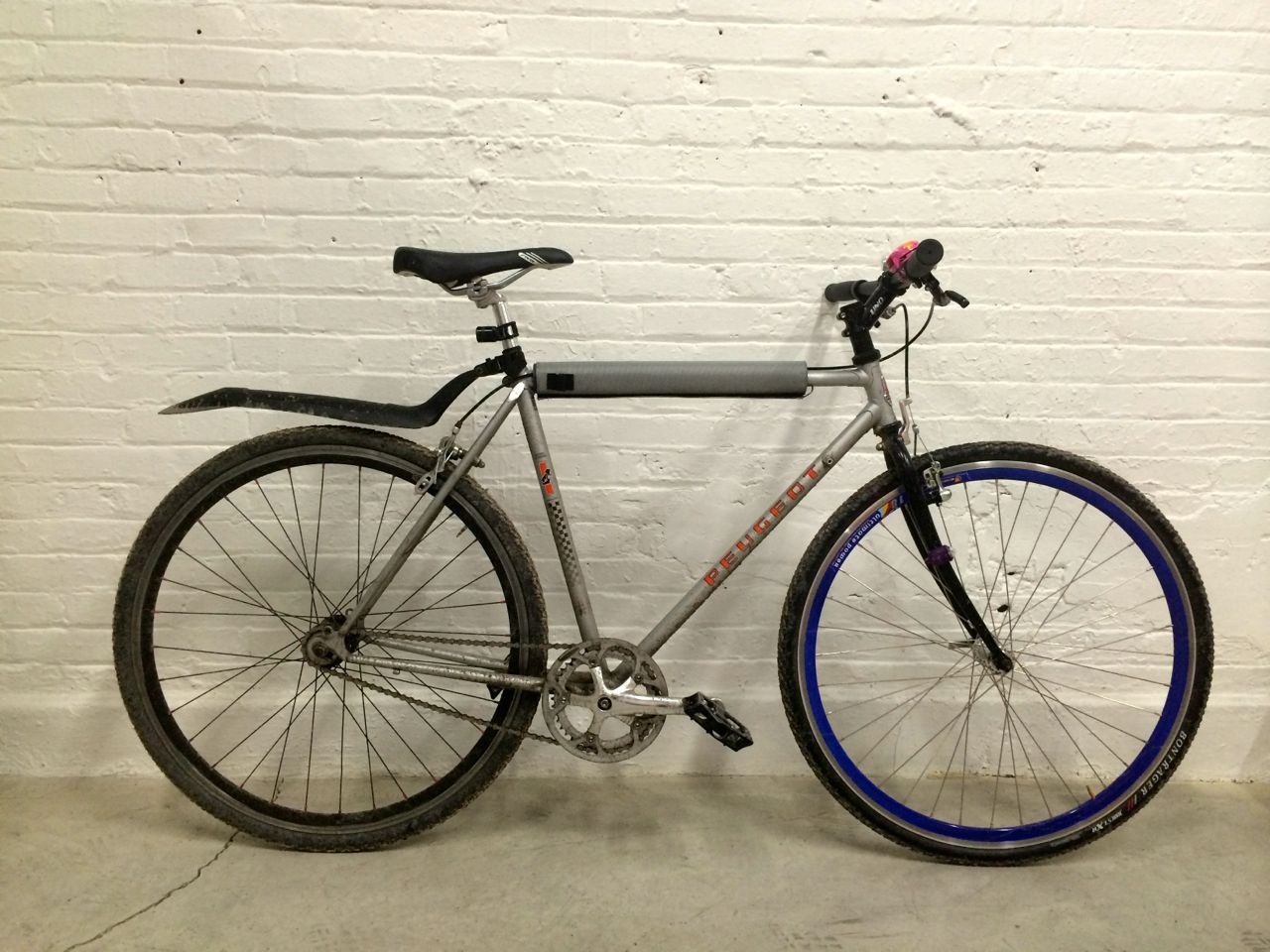 Sure, she may not be very pretty, but the Peugeot has everything I’ve learned a good winter commuter should have. The wheels are sturdy 700s with 34c cyclocross tires. It has a a comfy seat, grippy platform pedals, flat bars, and a removable fender to keep my ass clean on slushy days. There are enough blinky lights on it to cause a minor stroke.

I opted for single speed, to keep things simple – freewheel, because I’m not 18 and do not have a beard. At first the gearing was set to 42/16 – a common and reasonable set-up for riding slicks in the summer on pavement. But in the cold and snow, riding that gearing felt like running through deep water with cement shoes on. So after a week the flip flop hub was outfitted with an 18 tooth gear, which is much more to my liking. Plus, if I ever want legs like this, I can simply flip the wheel back to the 16. 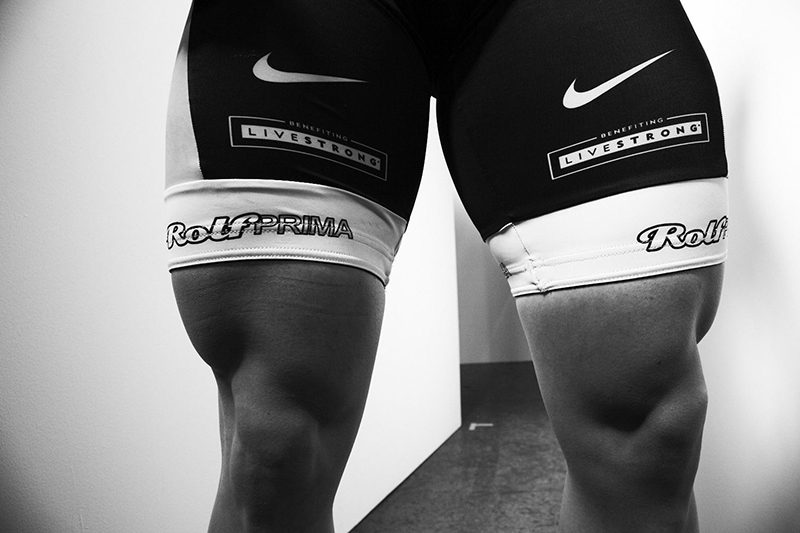 One of my favourite parts of the bike isn’t even part of the bike – it’s a glorified pool noodle that fits over the top tube. Not only does it cover the knobby cable guides (which would wreak havoc on my precious ski pants), it provides a nice cushy place to sit as I wait at red lights. If you grew up in a cold climate, I guarantee you have put your tongue on frozen steel once. And only once. The very thought of my body coming even indirectly in contact with cold steel makes me shudder. 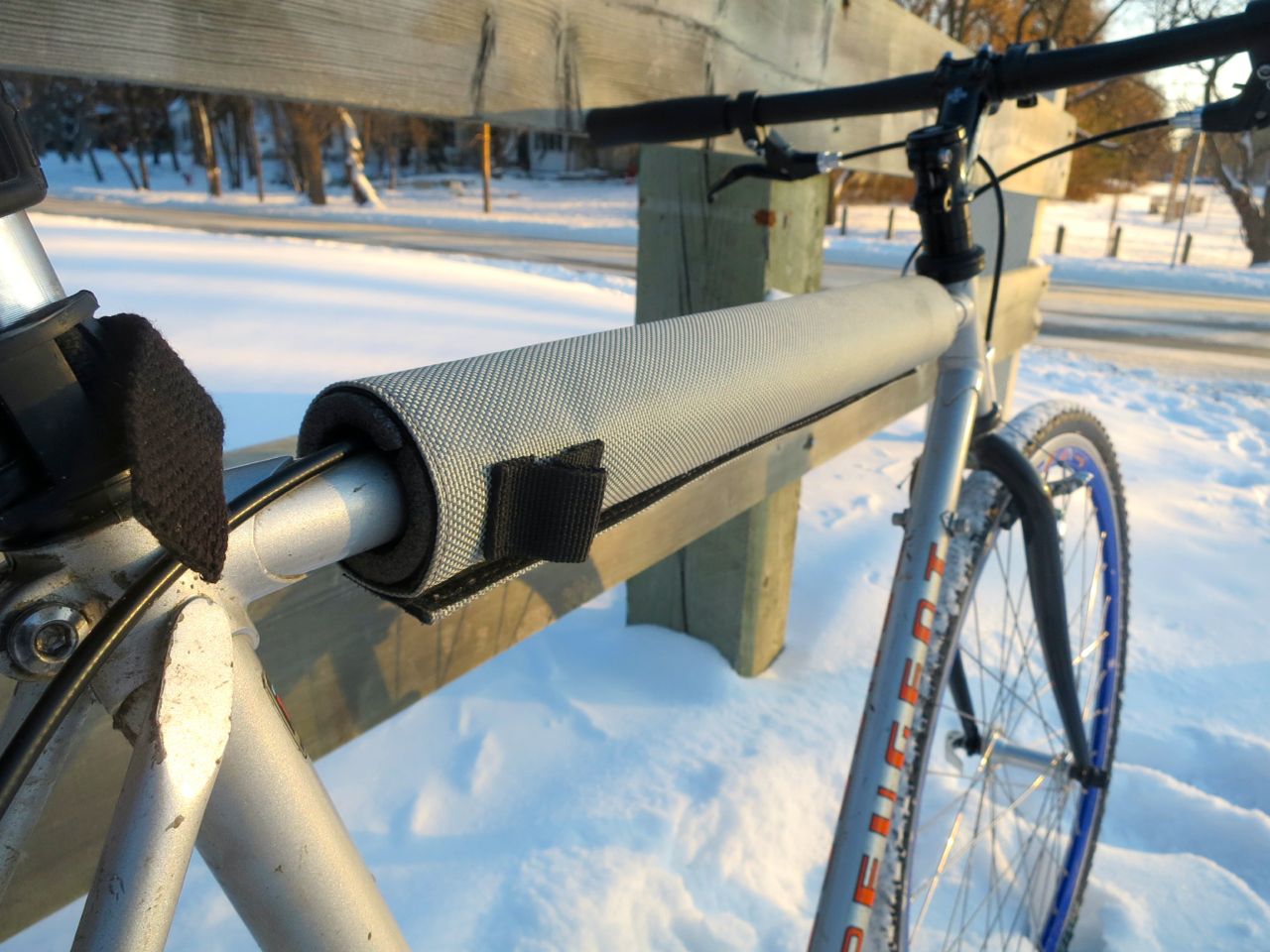 Many of the parts were scavenged from unused remnants of the Princess Bike, hence the moderately hideous mismatched wheels. The bike has a double ring in front, which was inexplicably cheaper than a single, so the outer ring was filed down and now acts as a chain guard (because ski pants). The brakes are a bit of a hodgepodge, with cantilevers on the front and callipers on the back that you could drive a truck through. The real deal head badge is a nice touch though – a reminder of the original Peugeot pedigree. I like to think that at some point in this bike’s history it was ridden at great speeds by a handsome and obnoxious Frenchman through the Pyrenees.

Bikes are kind of like black shoes. Sure, you might have a million pairs, but each one has a very specific purpose, and it’s ridiculous to think one pair will work under all conditions. Winter cycling is hard, dirty, and pretty badass, so it only makes sense to use a hard, dirty, and badass bike. Would William Wallace have led the Scots into battle wearing stilettos? No he would not. Or to put it in less girly terms, would he have charged the English in a Prius? Certainly not.

As much as it pains me to say it, looks are not everything, and having a sensible commuter bike, well that’s pretty smart.

Many thanks to Graham, Andrew, and of course Adrian (Fonz) for showing me the way.