I’m sitting in the beer garden with my friend Colin, staring blankly at the sandpit with a cold and flimsy beer cup in my hand. I’m dog tired and enjoying the first moment off my feet since forever. He is talking, and I am half listening, trying to clear my head of the ten million details that have been swirling there for the past six months. He tells me a story.

“For many years I did the electrical work at a large music festival. On a particularly challenging day, the executive director approached us and said ‘The festival is like a duck. The people, they only come to see the duck – not its feet frantically paddling under the surface. Of course without the paddling, the duck will sink, but nobody wants to see that. Just the duck, gliding effortlessly on the water.” 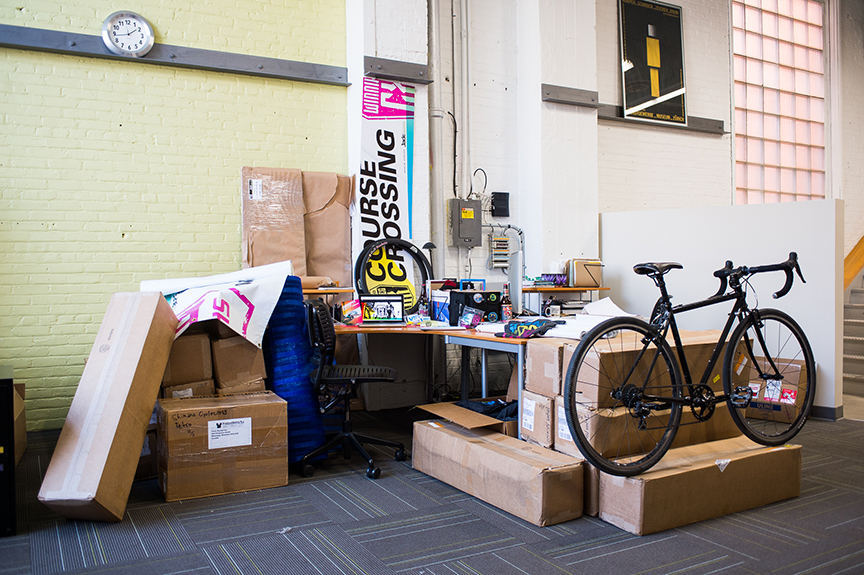 There’s a desk in there somewhere. Photo by mark Reimer. 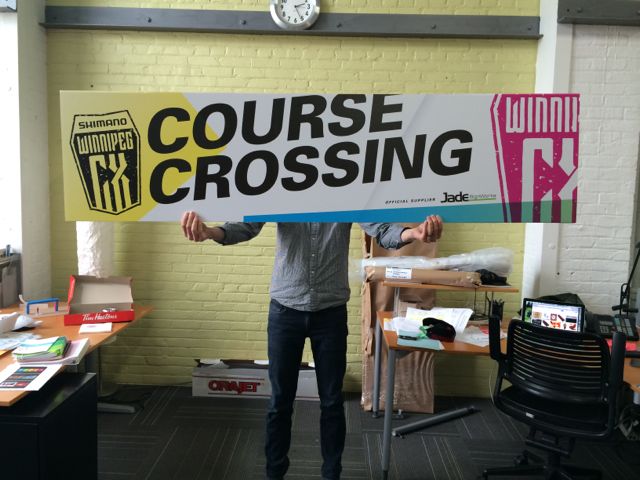 There were a lot of fun side projects too – like the unique podium designed by local starchitect Colin Grover and his team. It barely survived a catastrophic moving mishap, was carefully rebuilt and then stamped in the nick of time by a structural engineer on his way home from a dinner party. Thankfully most cyclists who make it to the podium are pretty skinny and their bikes weigh next to nothing. 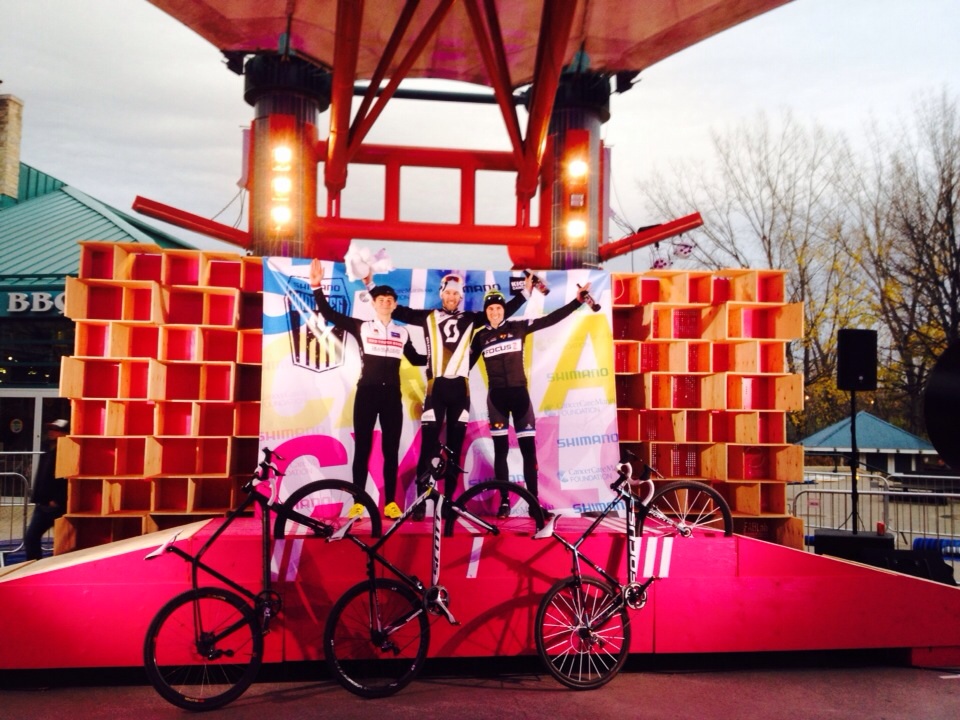 The podium that almost wasn’t. Photo via Aaron Schooler.

We worked with Jaron the Facilities Czar to create a custom finish line arch. One of the minions made this scale model. As you can see, the final arch was to measure approximately one third the size a very large adult tyrannosaurus rex (and roughly ten times the size of Spinal Tap’s Stonehenge). 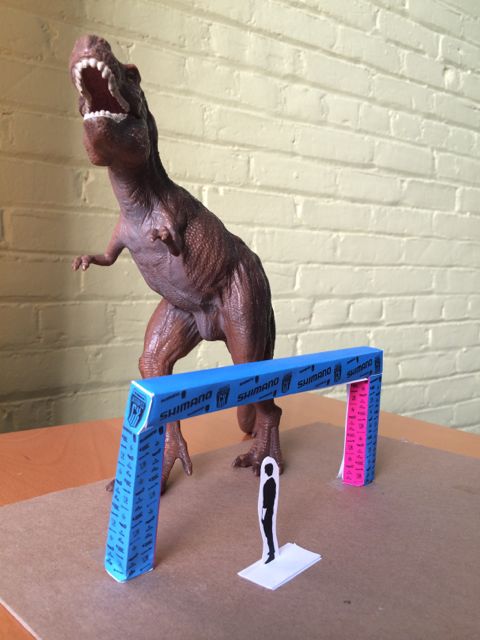 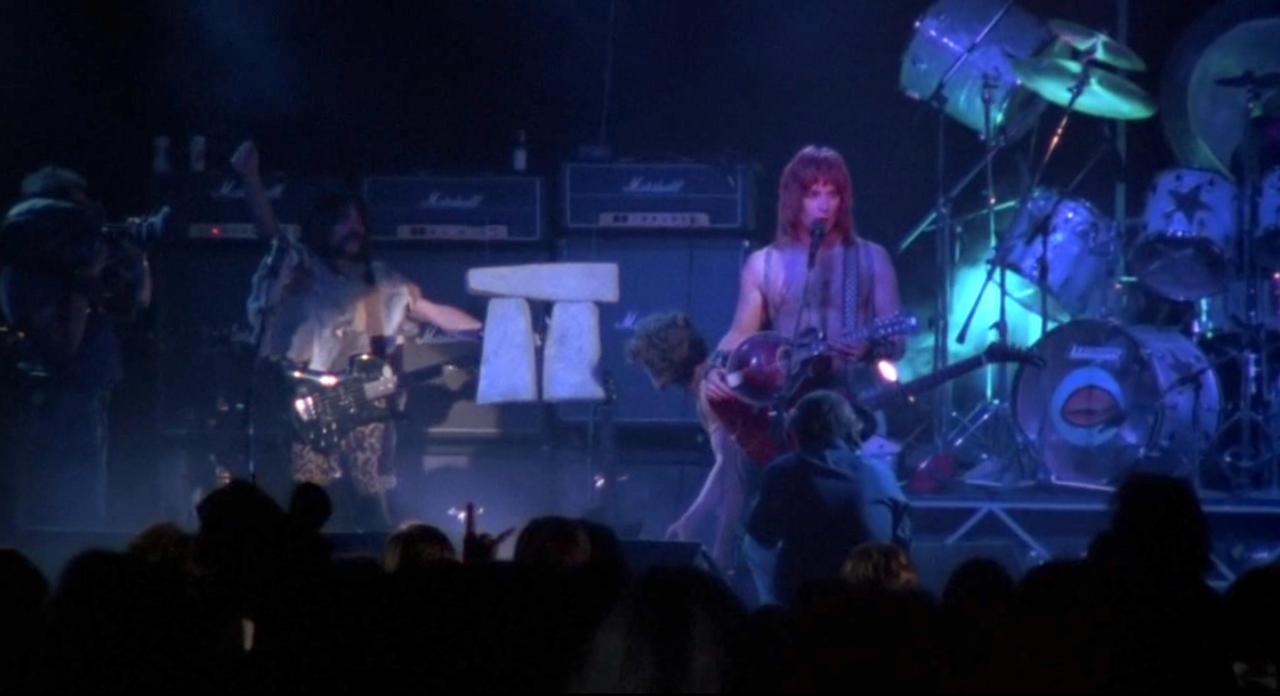 The final one was spot on. And much straighter. 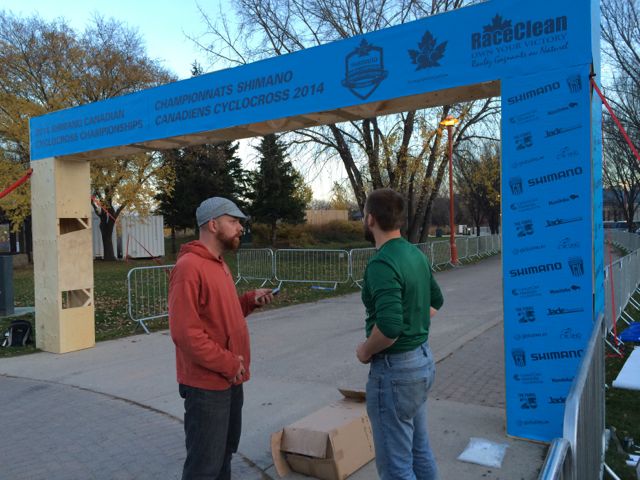 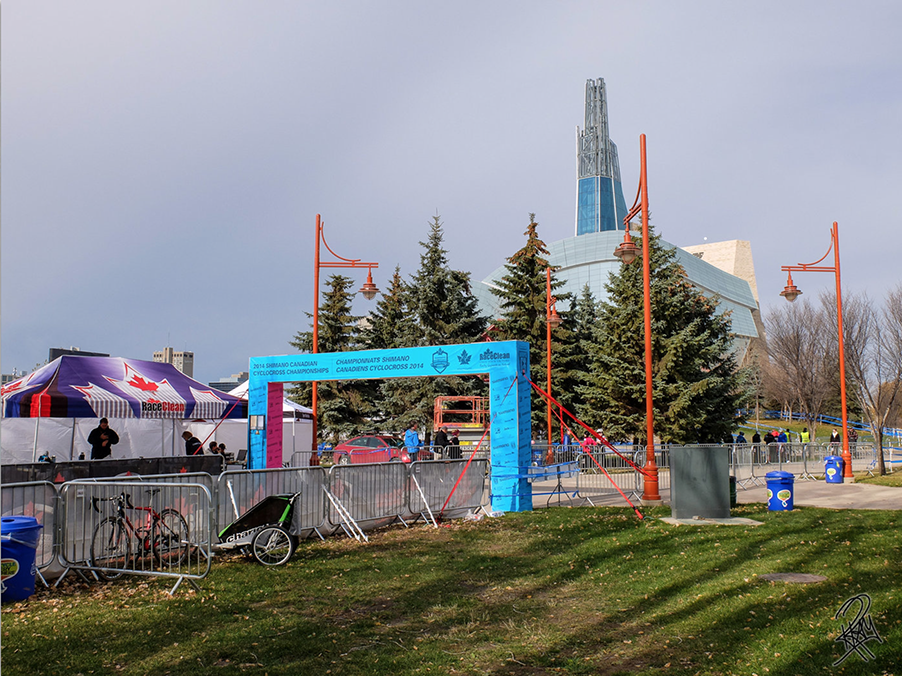 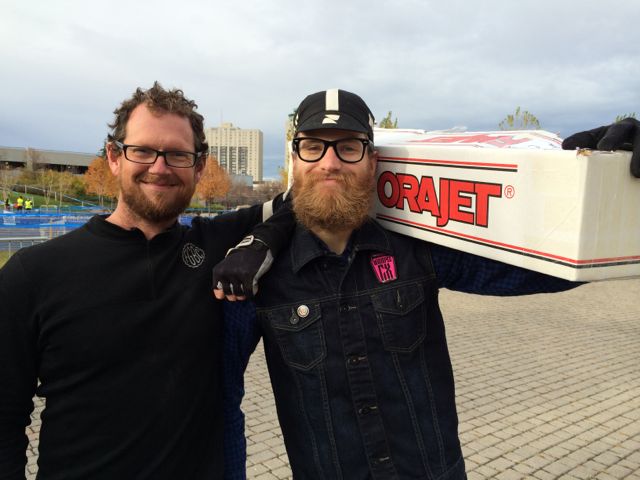 Jonny G. and Mark (aka The Hipster).

Although I was unable to race due to a back injury, I am reasonably sure I walked a thousand miles over the course of the weekend – which is a lot, but probably only half of what the course crew did. The crushing pain of not being able to race was only outdone by my brief face-to-face encounter with pro racer Mical Dyck, who, in my delirium I awkwardly mistook for every female athlete from Katie Compton to Venus Williams. 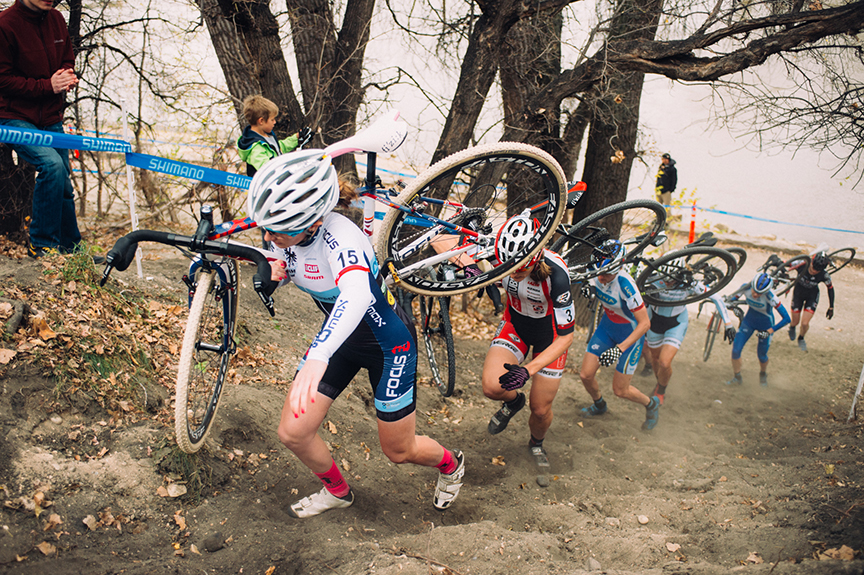 The Elite Women. Mical is second from the front, behind Venus Williams. Photo by Mark Reimer.

People from all over the country came, plus a handful of dedicated Americans who drank vats of beer and still managed to kick our asses. 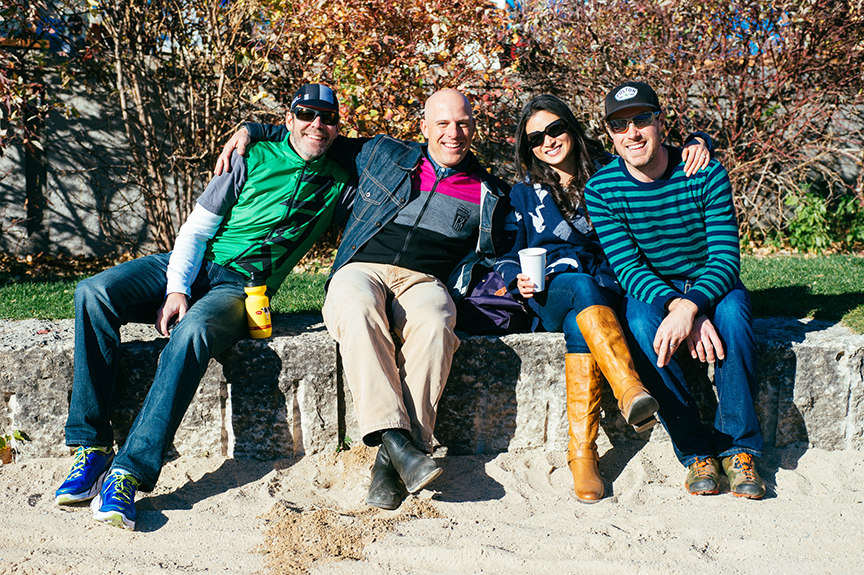 The Americans. Photo by Mark Reimer.

The course was a marvel, and stayed together during the gale force winds thanks to the tireless efforts of the course directors and many helpful volunteers. If there is one thing the people loved, it was the course design, which I’m told was very Belgian in style, and incorporated a veritable buffet of surfaces and challenging features. I have to admit to taking a delightful sense of schadenfreude watching the many spectacular wipe-outs at our own corporate course feature, The Tétro Knoll of Pain. 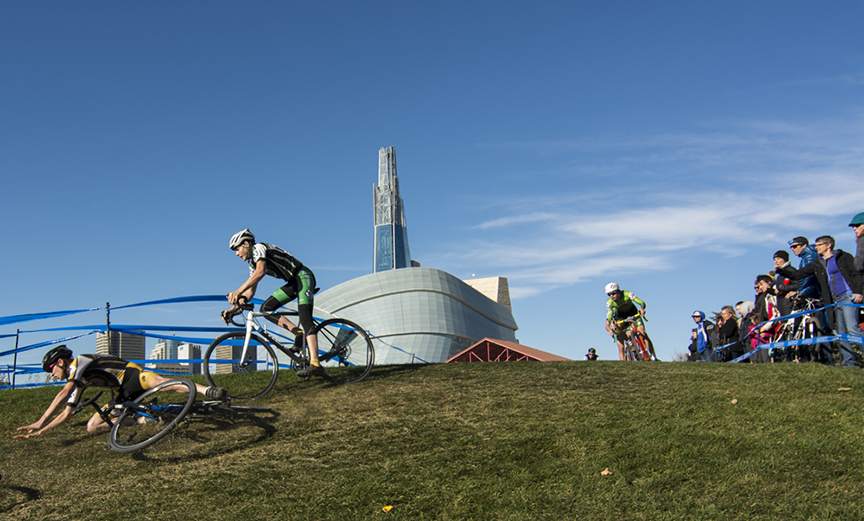 It is this blogger’s opinion that a major cyclocross event is only as good as its parties. On Friday night, Natural Cycle hosted a street party that will most certainly be talked about in hushed voices for generations. The Dead Ringer was flowing as we raced the world’s shortest (and possibly most treacherous) cyclocross course amid general pandemonium and good timey fun. 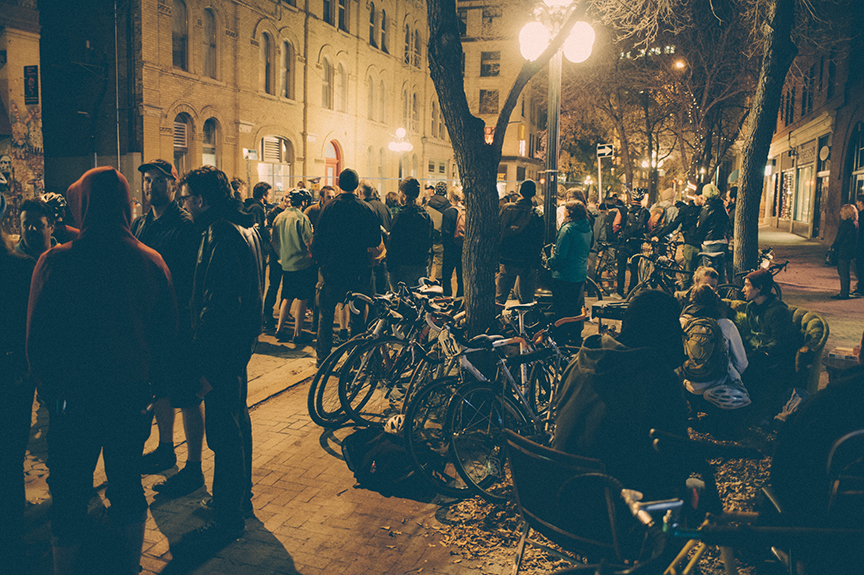 Albert Street as it should be – shut down for a bike party. Photo: Mark Reimer. 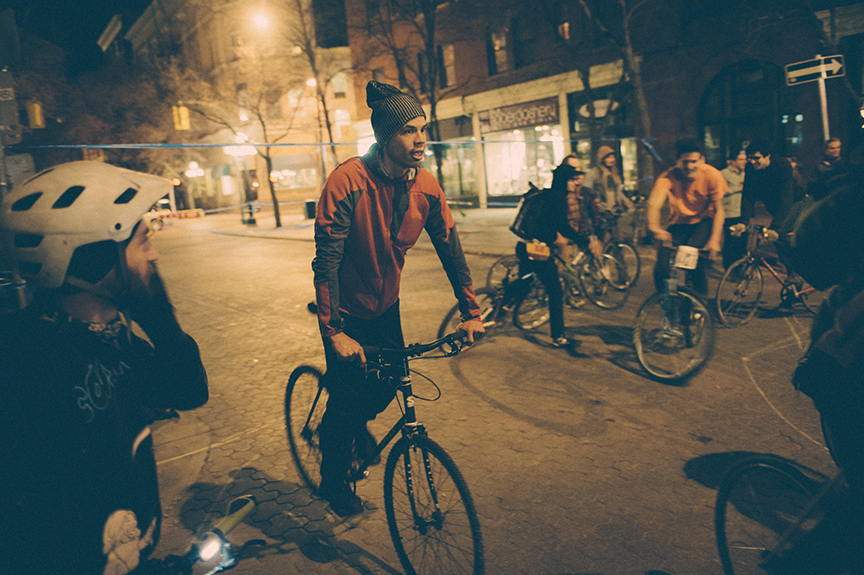 Fonz gets ready to tear up the course. Photo: Mark Reimer. 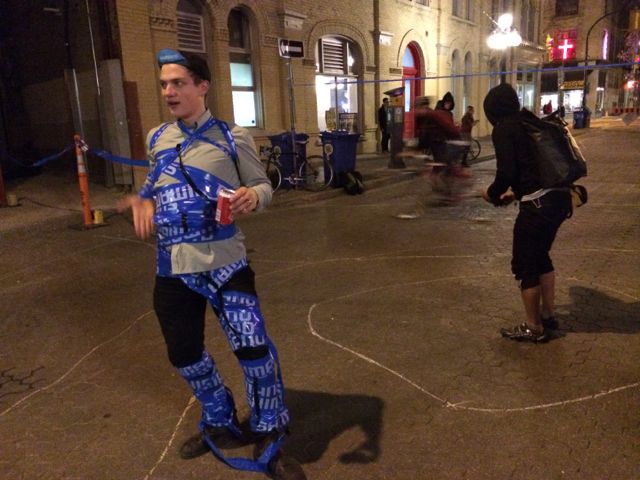 Apparently by the end of the night I was speaking in French. Or so I’m told.

Sometimes it’s hard to enjoy the things you help create, but there was no denying the spectacle and good times. There is a huge list of things that went well, and an even bigger one of things we need to do better next year. Regardless, I cannot even begin to express how in awe I am of the people who made this event possible. Race Directors Chris and Ian took on a seemingly impossible task, and recruited a devoted army of incredible people to help make it happen. And somehow through all of the chaos, they managed to stay calm, organized, and maybe even enjoyed themselves a little. 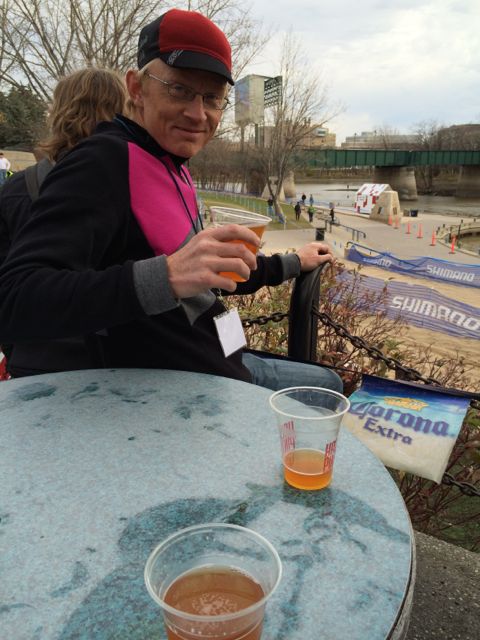 Shimano and all the other sponsors were great. They came out and hobnobbed with the locals, bringing nothing but positive vibes, more good times, and tons of great feedback. 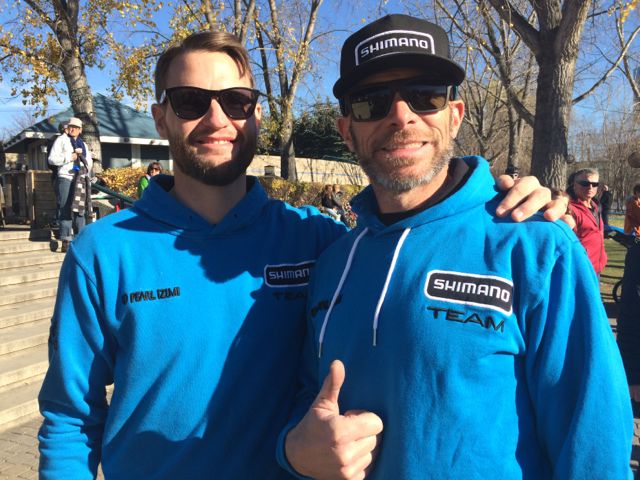 Members of Team Shimano, just being their awesome selves. 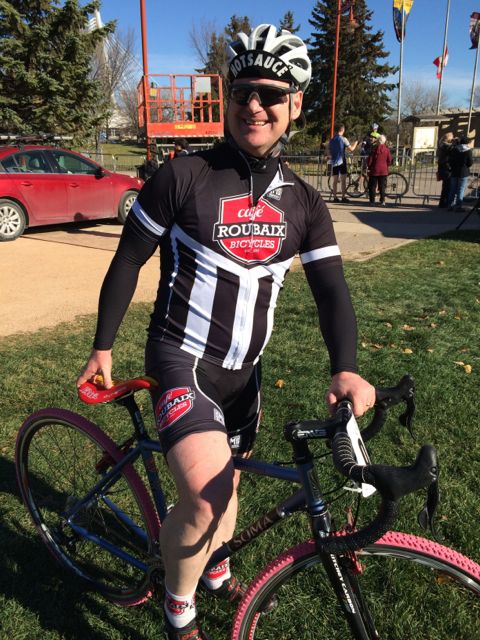 Dan from Cafe Roubaix, smiling in spite of an unfortunate saddle mishap. 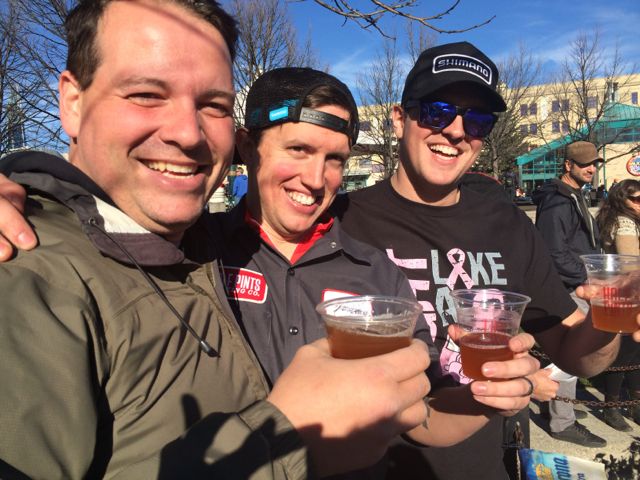 The Half Pints Dudes, brewers of Dead Ringer, and totally hooked on ‘cross.

The pros that came out were equally impressed, and did some pretty major impressing themselves. Catharine Pendrel cemented herself as The Most Awesome Cycling Pro Ever in the Whole Entire World when she took this young fan for a solo spin after her UCI race on Sunday. 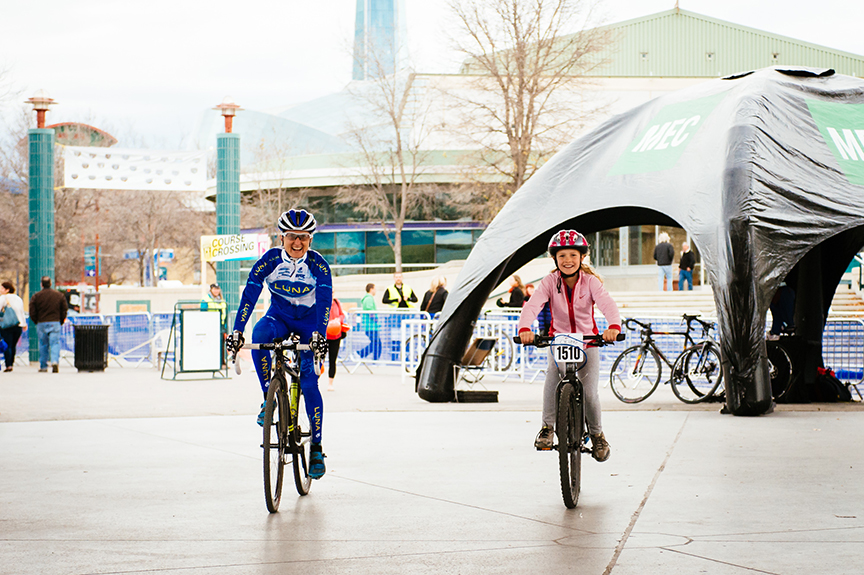 Needless to say, over the course of the weekend, there were mishaps. While we anticipated that some things would inevitably go wrong, we had no advance knowledge of what those things might be, which added enormously to the excitement. There were schedule challenges, course and venue challenges, food and volunteer challenges, merchandise and sponsor challenges, bathroom challenges, registration challenges, and wind challenges – none of which came close the the largest challenge of all: finding the goddamn staple gun. 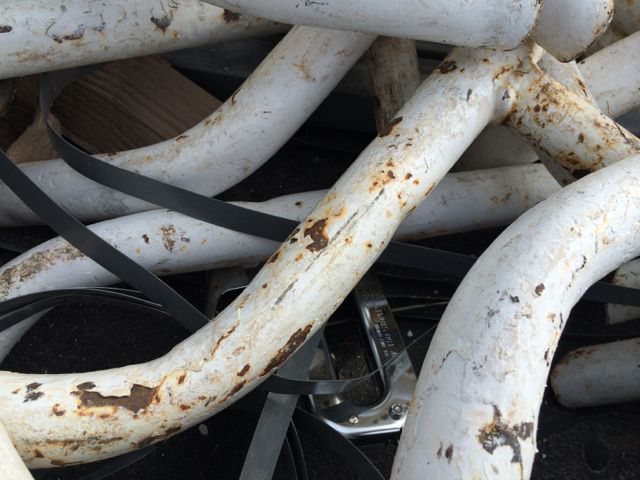 At the end of it all, the duck did float, and from what people said, it was a fine looking duck. Have a look:

← Remembering Italy
The Princess and the Peugeot →