Propaganda and the Fabricated War

I was happily driving home from work on Friday, looking forward to a long summer weekend of gin-induced relaxation, when a chipper voice on CBC radio informed me that according to a recent online poll, “Winnipeggers don’t seem to like cyclists”. I pulled the car over. The voice had my undivided attention.

The poll found that fifty-seven per cent of Winnipeggers think cyclists are “inconsiderate to drivers”, while forty eight percent found them inconsiderate to pedestrians on roads and sidewalks. “There seems to be a road war on the go in Winnipeg”, explained a representative from Probe Research, noting her surprise at the animosity towards cyclists. “I think this poll does show that cyclists perhaps need a little tune-up of their own attitudes”.

To make matters worse, the story was followed up by a second, equally derogatory one that interviewed a cyclist who was run off a dedicated bike path by another cyclist. She was suitably (and justifiably) pissed. I can only surmise that this unfortunate succession of stories was meant to illustrate that not only are cyclists despised by drivers, they are equally loathed by other cyclists.

Sitting in my car at the side of the road, I considered the spectacular stupidity of it all. Who on earth would commission a poll that asked people what they think of people on bikes? And to what end? Why not a poll asking about the likability of the left handed? Or Capricorns? Worse yet, why would anyone choose to report on this hate-inciting rubbish during rush hour on the Friday before a long weekend, when frenzied commuters are focussed on one thing: getting out of dodge as quickly as possible to sit on the dock with a cold beer.

I have always found the CBC, and the Winnipeg media in general, to be exceptionally sympathetic advocates for active transportation – and yet here, between the weather forecast and a song by The Tragically Hip, the CBC had cheerily and effectively declared open season on cyclists. To say this was out of character is a massive understatement. To say it was disappointing, is an absolute truth, because unlike many media sources, I have come to hold them to a pretty high standard.

Naturally, I find the results of the poll itself both distressing and perplexing, particularly since there was zero context offered. Who commissioned the study? How was it distributed? What was the purpose? Who were the respondents? Am I just inconsiderate and annoying when I’m riding my bike, or all the time? (I will, of course, assume the latter). Personally, I don’t find cyclists particularly inconsiderate or annoying when I’m driving, but in that respect, according to the poll, I am clearly in the minority. I have certainly seen people on bikes exhibit inconsiderate behaviour, but suspect those individuals would behave poorly regardless of their mode of transportation.

I am a driver who has watched in fascinated horror while a seemingly oblivious cyclist wobbles from sidewalk to road and back again, with no regard for man nor beast. I am also a cyclist who has had vehicles steered directly at me, both intentionally and unintentionally, to the point where I have prayed to deities I don’t even believe in to spare my miserable life. Having been on both sides of this particular fence, I will tell you this: when I’m driving, there is rarely a time that I am unclear of where I should be on the road, which direction I should be going, or whether I should stop or go. I proudly consider myself a confident and experienced driver, and feel quite safe in my little metal cocoon. Comparatively speaking, when I’m on my bike in traffic, I am on alert at all times – knowing I am vulnerable – a turtle without a shell. My radar is on full power as I do my best to navigate cars, potholes, road debris, construction, and an incoherent network of half-finished bike lanes. In terms of cycling education and infrastructure, Winnipeg (like many North American cities) is the Wild West – a vast frontier in dire need of law, order and anti-clap medication. 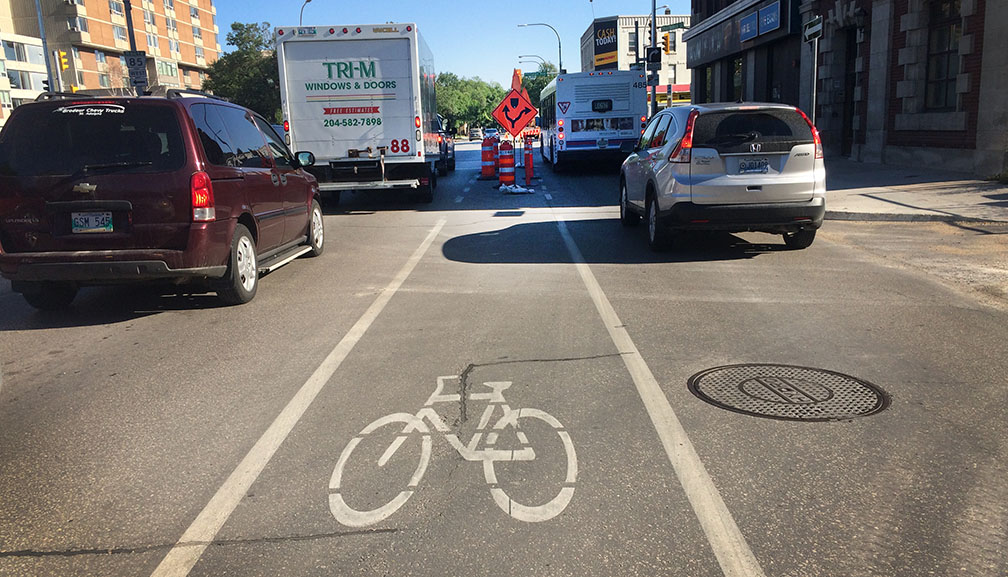 In a city with flawed and insufficient infrastructure, complaining about bad cycling behaviour is like refusing to buy diapers and complaining when your toddler shits all over the floor. However, the news story was quick to point out that Winnipeg’s dislike of cyclists on the roads doesn’t translate into support for designated bike lanes – with twenty-seven percent of respondents seeing bike lanes as low priority, and another twelve percent not considering them priority at all. All true. However, what the story DIDN’T mention was the fifty-nine percent of us that feel they ARE a priority. Same data. Different spin. The article also threw in the obligatory random mention of helmets, which, as far as I can tell, had nothing whatsoever to do with the poll or resulting data.

Net take home message: “Cyclists are assholes!! Something, something, helmets!”

I may not be the sharpest tool in the chest, but much like that time in Greece when a street vendor tried to sell me a pack of matches for the equivalent of twenty Canadian dollars, I know when I’m being bamboozled. The media does not make the news, they merely deliver it to us in whatever manner they deem appropriate, using whatever spin will sell the most newspapers, airspace, or clicks. Reading the full story online, it became immediately apparent that the network had, for all intents and purposes, presented the results of the survey in such a way as to be as disparaging to cyclists as humanly possible. But why?

Canadian politics are boring. I get that. We’re painfully bereft of sex scandals, and have little risk of our government being taken over by a dangerous and narcissistic billionaire. But is the public so starved for the excitement of conflict that the media feels compelled to fabricate a civil war based solely on how we transport ourselves to our workplaces, hockey arenas, and the local shopping mall?

Contrary to what the media would, whether through malicious intent or (even worse) unfortunate carelessness, lead us to believe, there is no ‘war’. In Afghanistan, there is a war. Here, there is a collective frustration and general pissy-ness of the mobile population that is largely the result of insufficient urban planning. In the Netherlands, this discussion would be ludicrous. Bikes and cars (or rather the people operating them) live in a utopian state of harmony and mutual respect. Is it because the Dutch are nicer people? Please. We are Canadian – the only thing we are more renowned for than our hockey prowess and poutine, is our impeccable and wantonly excessive manners. In fact, the slogan on every licence plate in this province professes our uniquely Manitoban friendliness. 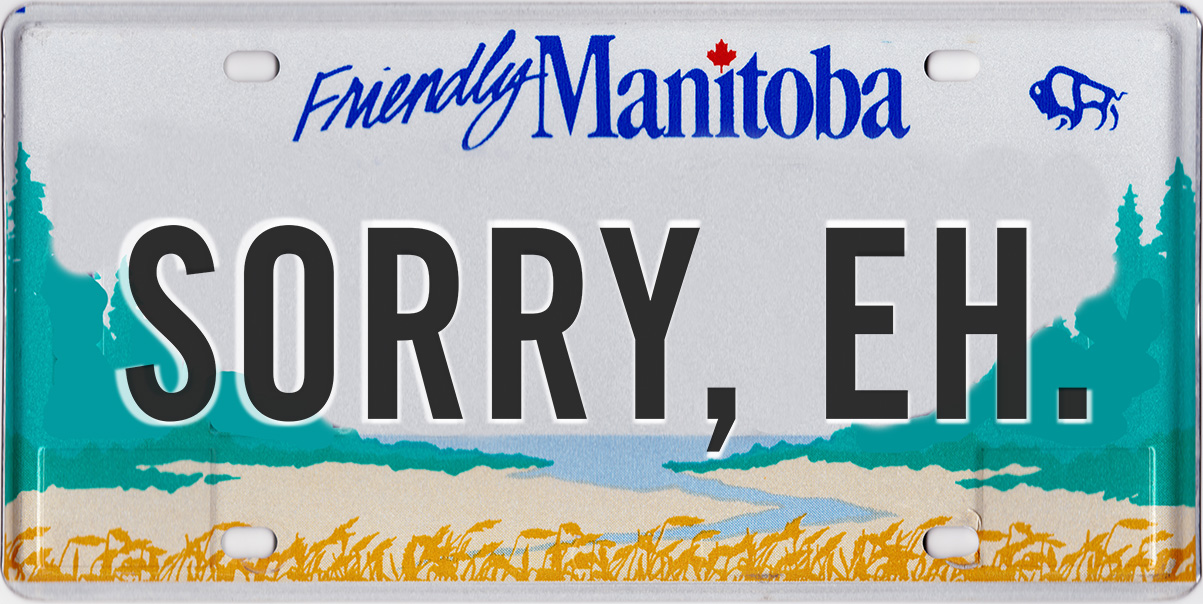 This so-called war is the result of either carefully crafted or accidental propaganda that would truly be the envy of any dictator worth his uncomfortably tailored suit and conspicuous moustache. While the ‘road war’ reference was, in this case, an innocent quip made by the pollster, it is an oft-used expression when referring to the disfunctional cyclist/driver relationship. The language of this apparent conflict is troublesome – particularly after collisions and fatalities. Cyclists are reportedly killed by trucks and cars, not people. Whether they were wearing a helmet becomes a topic of scrutiny, like in the case of the Winnipeg woman who was killed at Main and Higgins in 2012. It was reported that she collided with a car and fell under the wheels of a semi. It was also noted that she was likely not wearing a helmet. Given the grisly details of her death, whether or not she was wearing a helmet bears as much relevance as the colour of her socks.

A couple of days after I heard the story about the survey, I was in the car listening to a CBC interview with Alan Schroeder, a professor at Northeastern University’s School of Journalism. The Professor was discussing the powerful influence of both tradition and social media on the polarization of the voting public in the United States. People want to read stories that reinforce their opinions, not challenge them, therefore reporting in a centrist, neutral manner that neither supports one side nor the other is simply bad for business. Creating and maintaining a constant state of outrage, he explained, is the real money maker.

With great power comes great responsibility – and in cases like this, the press holds an enormous amount of power. With some careful crafting of words, they can incite hate, fear, and, in worst case scenarios, violence. In the same regard, their words can encourage patience, kindness, and understanding. I would urge them to choose the latter. After all, the pen is indeed mightier (and far more polite) than the sword.

As for the poll, I can only hope that our government will respond with a real and dedicated mandate to improve cycling infrastructure. If not, I can assure you that the fires of animosity will grow, and this fabricated war could indeed become very real.