When the Going Gets Tough, The Tough Ride Some Bikes

Winnipeg winters are one of the few things in this world that actually deserve the word “epic”. Our badass motherfucker winters are what defines us Winnipeggers, and we embrace them like a nice frozen moose carcass.

An unseasonably warm and snowless winter this year has put everyone on edge. People can’t ski, use their outside skating rinks, and worst of all, can’t complain about the cold. Apparently Winnipeg is the new Miami. 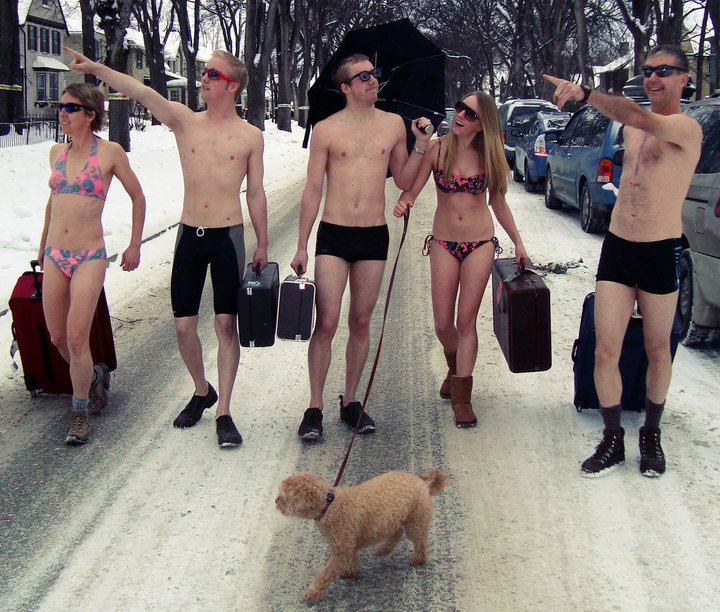 But I’m not worried, because with Actif Epica just over six weeks away I am confident that in precisely five and a half weeks we will receive the motherload of snow and the temperature will drop to a biblical minus 50. 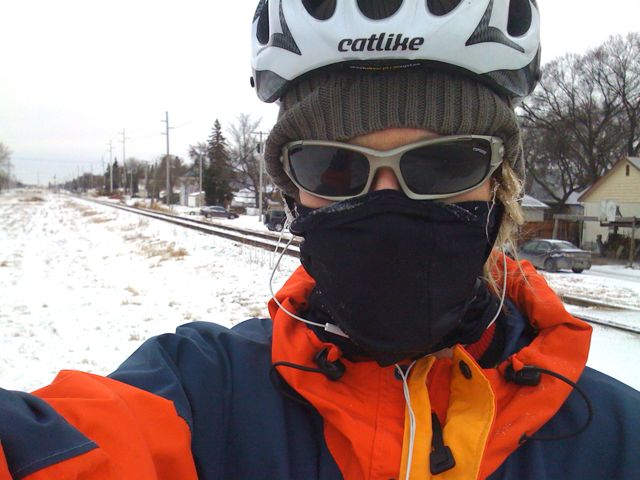 In the meantime, it will be necessary to continue to brave this intolerably temperate weather and put in some big miles outside. Here is the report of my ride on Sunday with a small group of hardy souls – including fatties Scott, Deanna, Tom, Ian and Guy, plus fellow token skinny, Brad. Our mission: an urban recon ride to find an alternate Epica route through the city should the Seine River be more suited to canoes than bikes.

Here’s how it went down:

We met at the Forks at a reasonably civilized hour. I became immediately concerned when I saw Ian’s gear, which included – among many other things – a sleeping bag. Exactly how long was this ride, anyway? 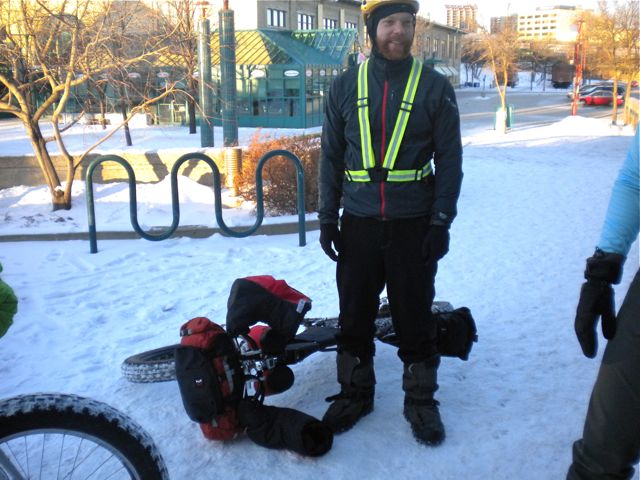 Off we rode, to explore the exotic lands of the East. 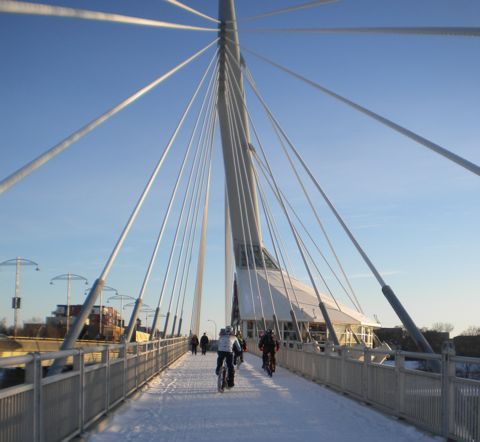 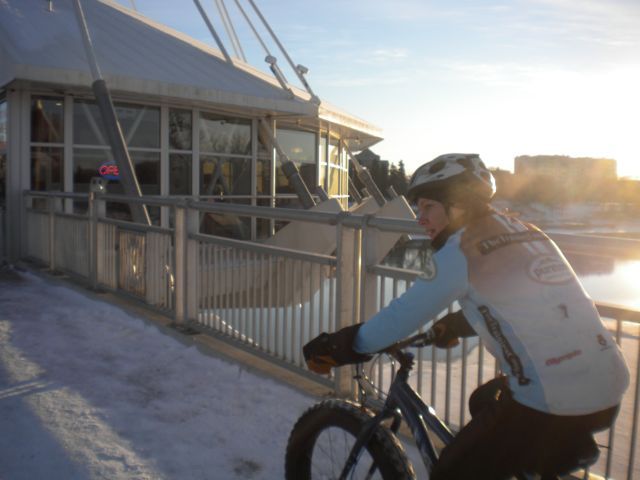 Right from the get go we endured blinding sunshine, great riding conditions, and intolerably mild temperatures. 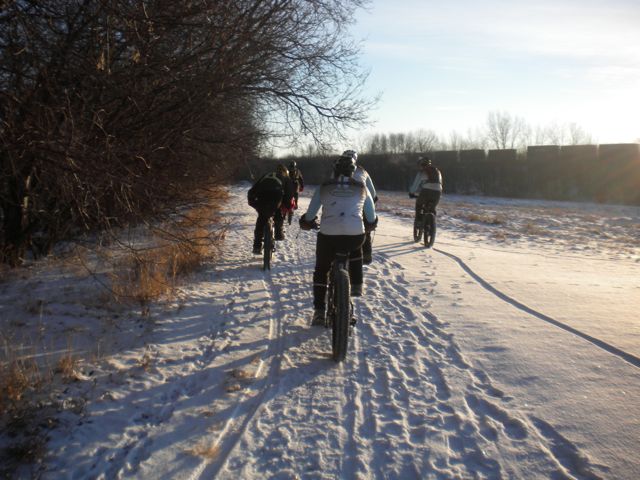 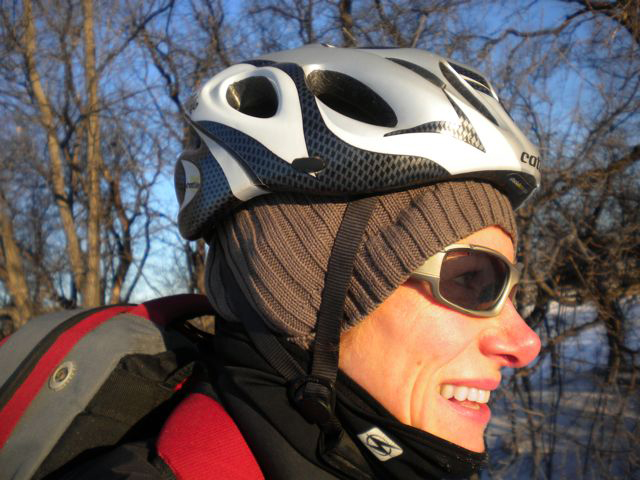 Down to the river. Hopefully it’s frozen and we don’t die. After you Scott… 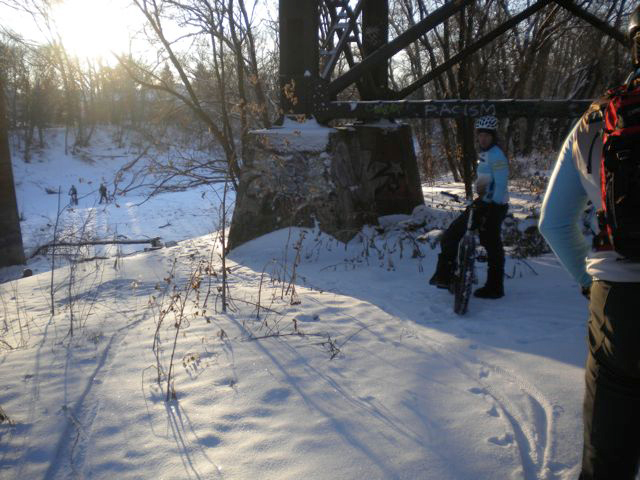 Holy shit! Look at the size of these footprints! (That’s Ian’s handprint on the left, for scale). Hopefully whatever animal made this is will go after the more substantial fat guys first. Please keep the cougar jokes to yourself. 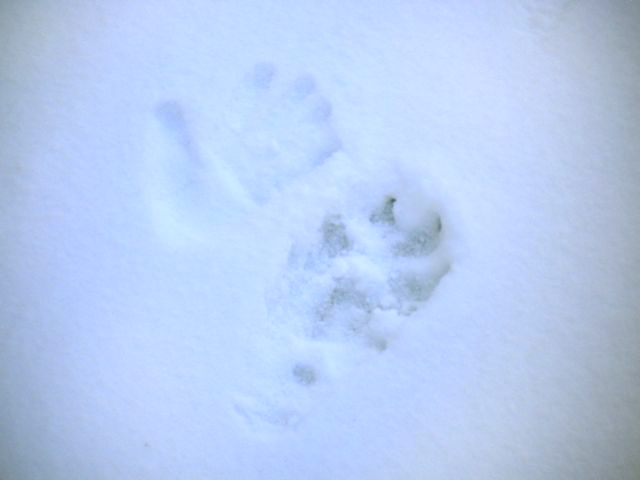 Here we make like our Voyageur forefathers and portage our bikes over an unrideable section. Technically, my forefathers were Bolsheviks and likely did more “marching” than “portaging”, but let’s not split hairs. 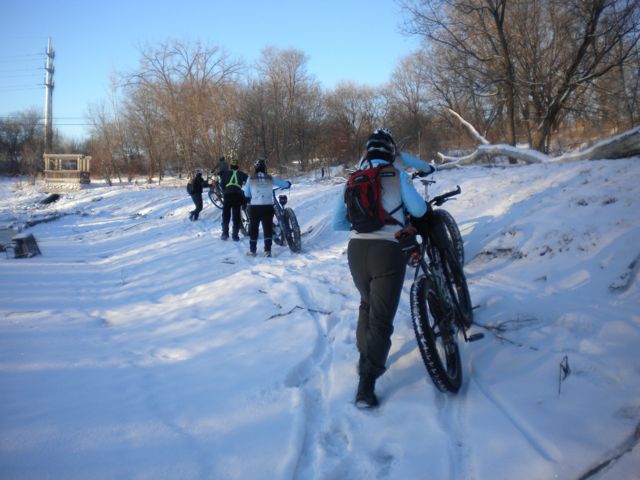 Thankfully the river is frozen and quite rideable. Now if only that miserable sun would take a hike. 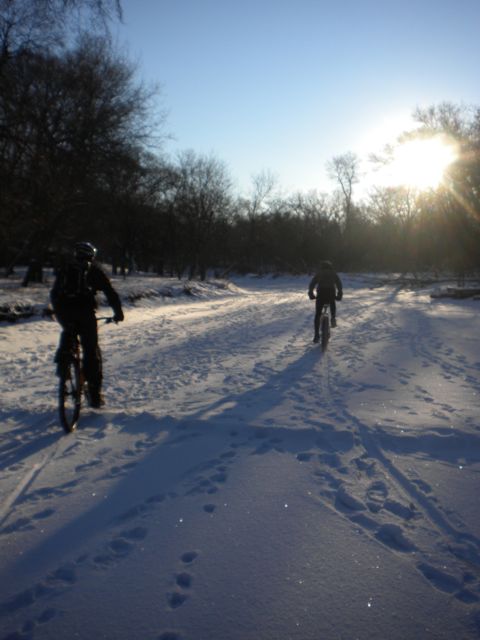 Hmmm. What’s this? Looks a little wet under this bridge. Let’s send the heaviest guy first to test things out. If he makes it across, we’re golden. Good luck Tom! 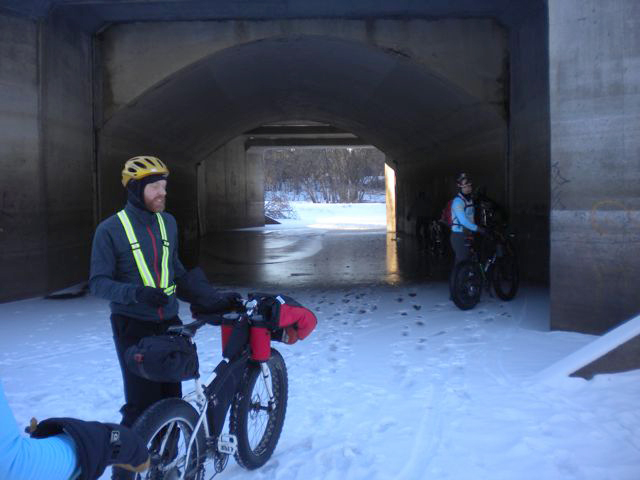 Whew! Looks like it’s safe to cross. Away we go. 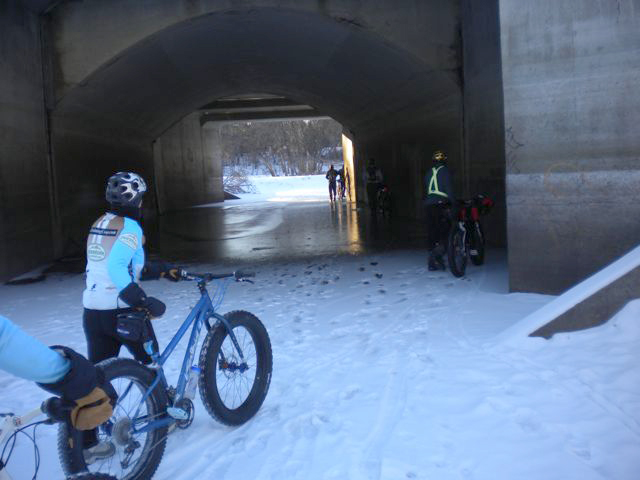 Clear of snow, you can see straight through the ice right to the river bottom where they keep all the shopping carts and beer cans. 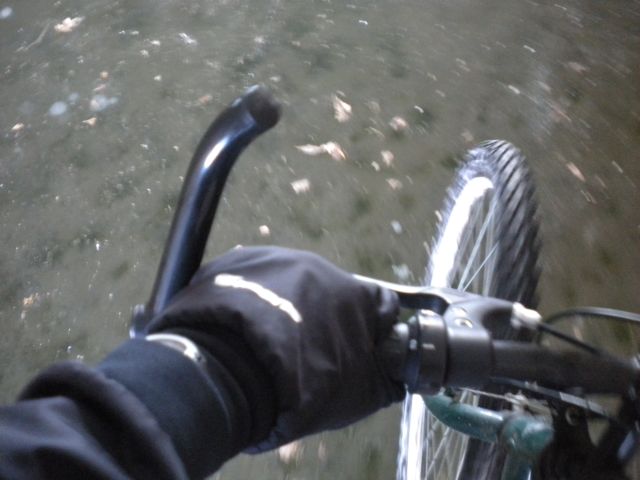 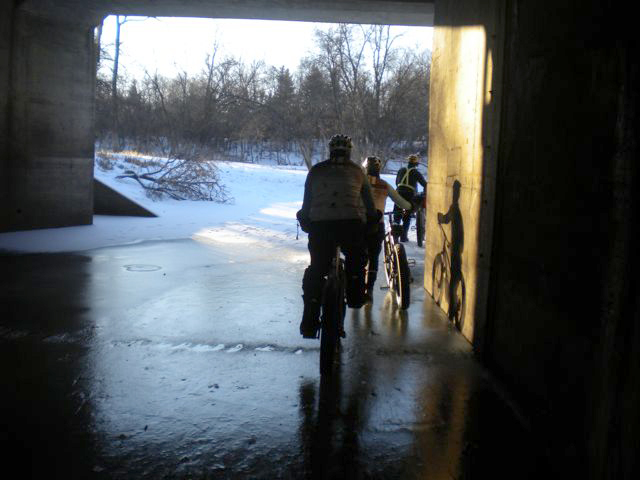 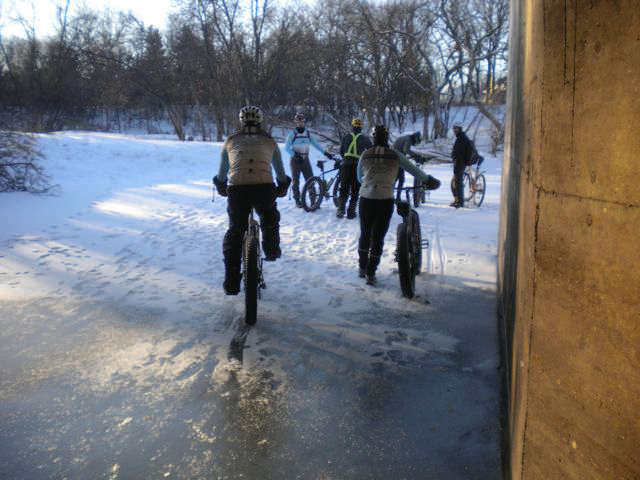 What now? Bridge trolls? No… it’s the video crew here to shoot our expedition of suffering and hardship which will undoubtably premiere at the Sundance Film Festival and win us all sorts of posthumous awards. 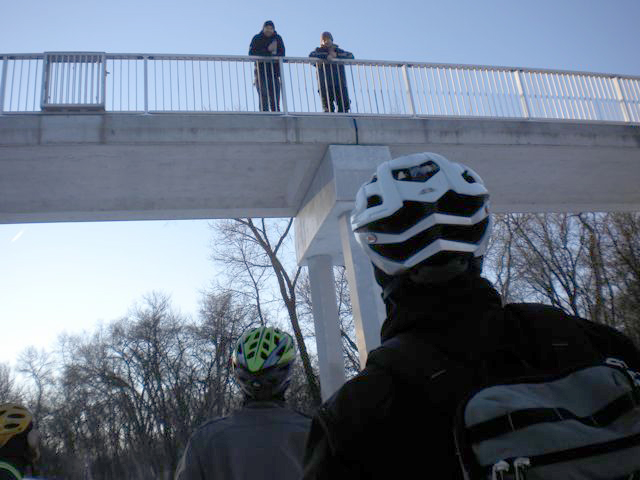 In between shots, we discuss many important factors that could mean the difference between life and death, like the nutritional value of Tom’s delicious pepperoni sticks. 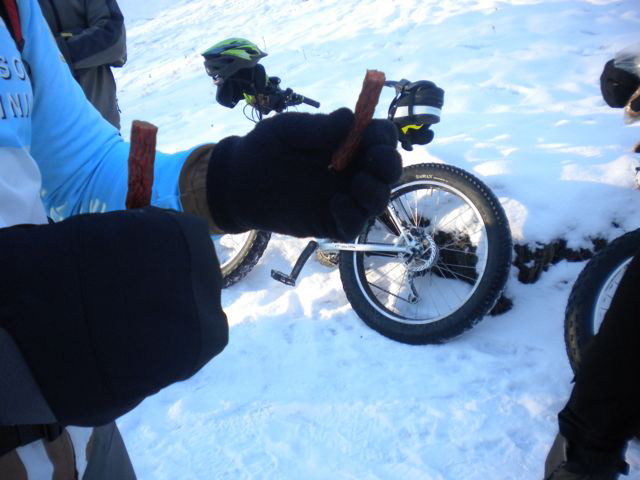 I also take a moment to inspect the insane amount of gear Ian will require to ride the 130 mile Arrowhead race a week before Epica. He is trying to get in some miles fully loaded down with all his gear to get a feel for the set up. When I ask him how much his bike weighs with all that stuff on it, he says he doesn’t know and doesn’t really want to. I suspect if I gave Big Dave Pitcher a double, we’d be close. 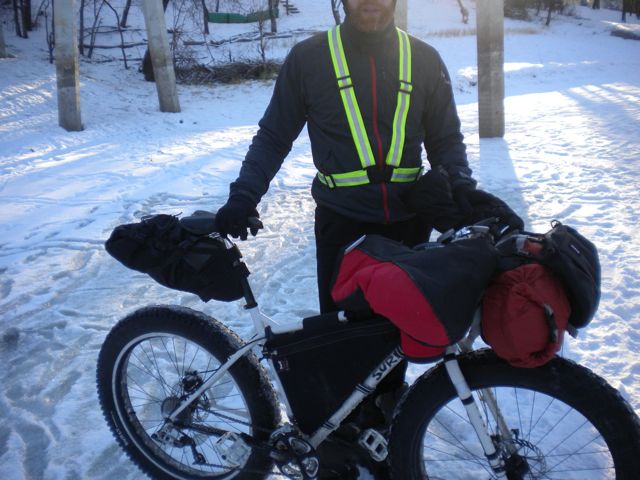 We also admire Ian’s impressive winter beard, which is both awesome and ginger. 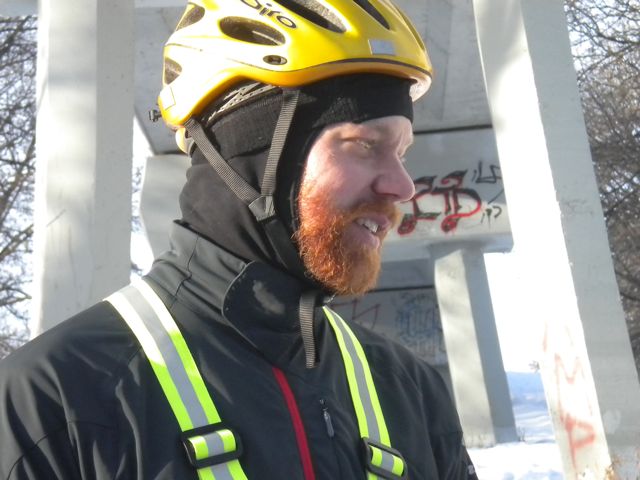 Being a film star is very hard work. In between shots we retreat to our respective trailers for massages, green M&Ms and Cristal. 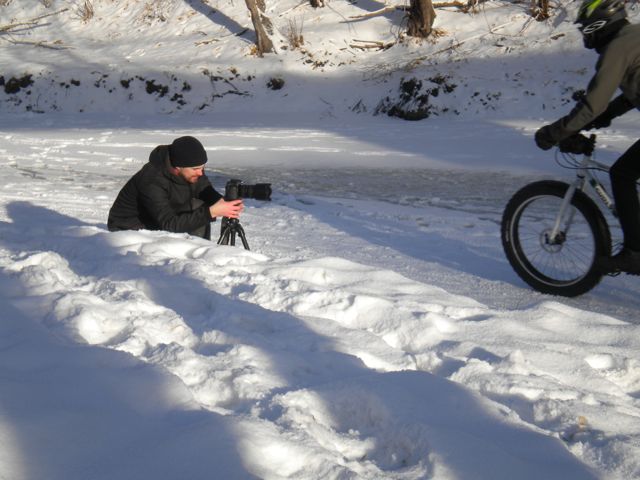 The shoot took longer than expected and I found myself running late. If you ride, you have no doubt experienced that awful moment when you realize you are late, and still a very long way from home. It is a terrible feeling, but on the upside it’s great time trial training. Especially on a mountain bike.

It was a good ride complete with a satisfying amount pain and suffering, including a terrifying ride over a Roadie Cliff*, the most spectacular endo I’ve ever witnessed, a near Sony Bono and a badly executed spit which landed on the boot of the spitter himself. Good times.

*A Roadie Cliff is any drop in elevation greater than the height of a standard street curb.

Thanks to Esther for letting me use the picture of her wonderfully wacky family from their annual holiday portrait! Totally badass.