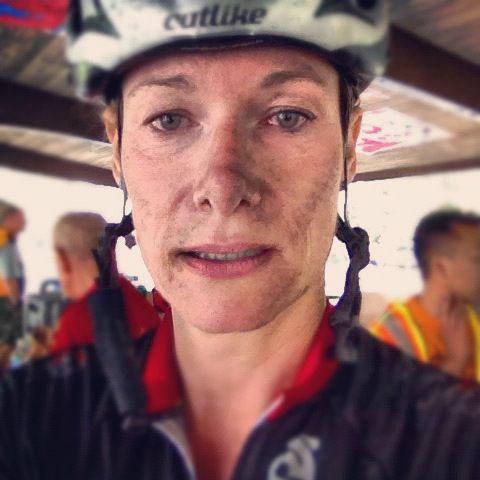 Believe it or not, this is a picture of a very happy woman. I’d just completed the Muddy Waters Gran Fondo, my third in four years. It was by far my best and fastest. And certainly the muddiest.

I love the fact that it pulls together people from all walks of life. This year I had the pleasure of riding with folks from almost all of the clubs, even though there was a staggered start that had the 100km riders starting a full two hours after we did. We also started from Kildonan Park this year, cutting out the sketchiest part of the ride – the police escorted neutral start down Main Street to the Perimeter Highway.

7am was an early start, even for an early bird like me. I packed my stuff the night before, and had a fitful sleep with dream after dream about forgetting critical pieces of equipment – helmet, shoes, and wheels. 5am came quickly and painfully, but also with the relief of a final bag check before flying out the door.

Muddy Waters actually started for me several months ago, when my friends Brian and Michelle approached me to design a special fundraisers’ jersey for the event. I think it turned out pretty well, and in return they allowed me some real estate for shameless self-promotion. 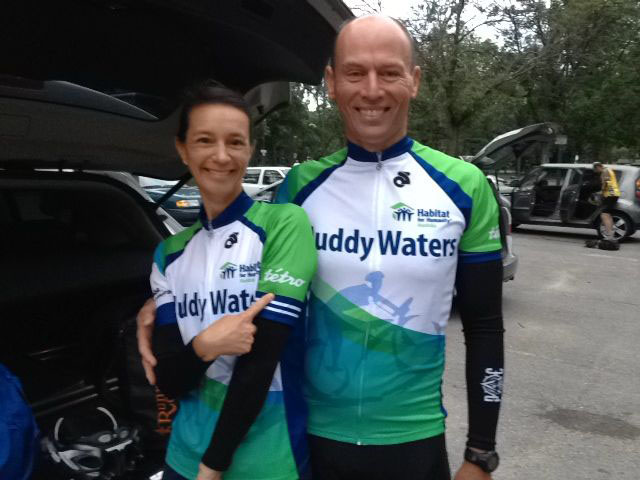 Looking good there kids. Brian is definitely a Spring.

There were over a hundred riders registered for the hundred mile ride, including my riding buddies Scott and Ben. My nightmares became Scott’s realities when he realized he had left all of his water bottles back in the fridge in his condo. A few of us had extras and were able to help him out. In return, he promised to pull us and buy us coffee for the rest of the season. Right Scott? …Scott?

Many of the usual suspects were there, including a big showing from FOG and Woodcock Cycle. There was also a crew of triathletes, like Dave Lipchen, Pat Peacock, Jared Spiers, and even my hero, the amazing Edie Fisher – who’s cycling and triathlon accolades are far too many to list here. Let’s just say that Edie is The Shit. At the end of the ride I nervously approached her and thanked her for a great ride, telling her how cool it was to ride with her. She said I rode very well. I think I fainted. 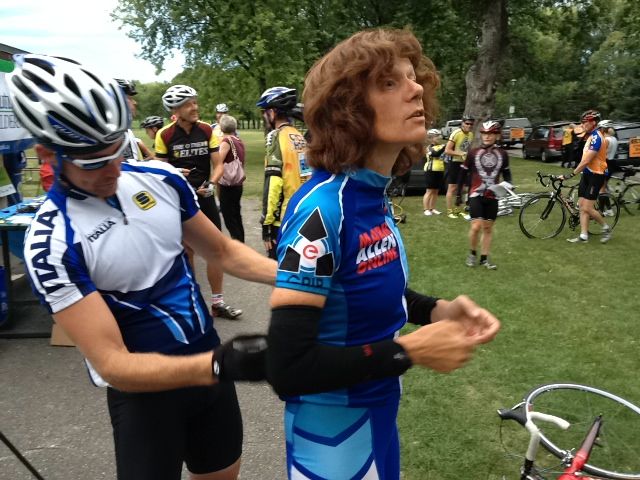 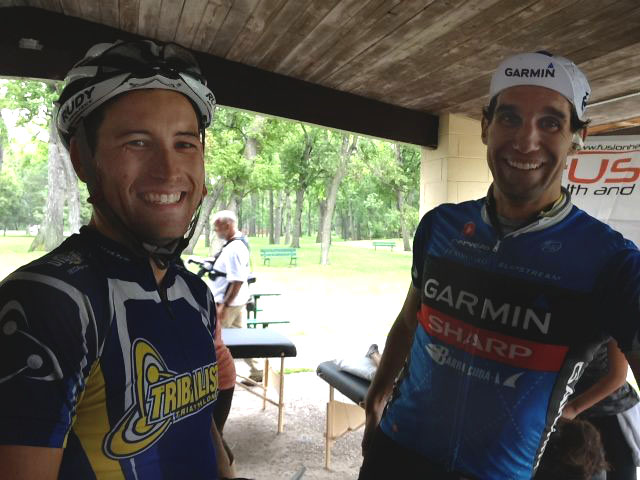 The Velodonnas were also there, and demonstrated their great teamwork even in the act of number pinning. I hear they were involved in a crash, but thankfully it sounds like everyone is ok. I think we can all agree crashing sucks ass. 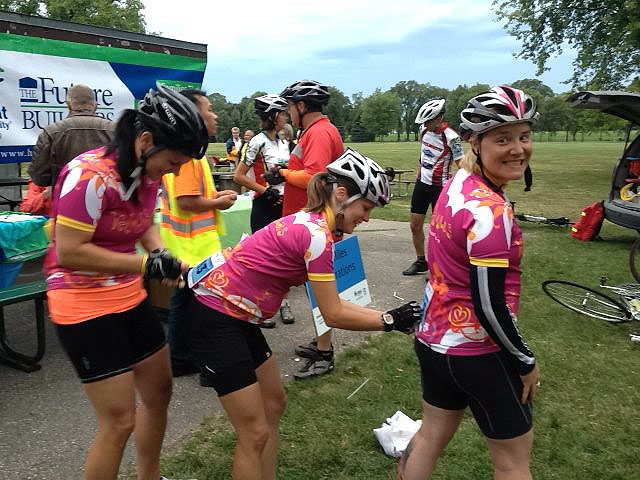 Especially crashing right at the finish line in front of crowds of cheering people. Right Erick and Jim? 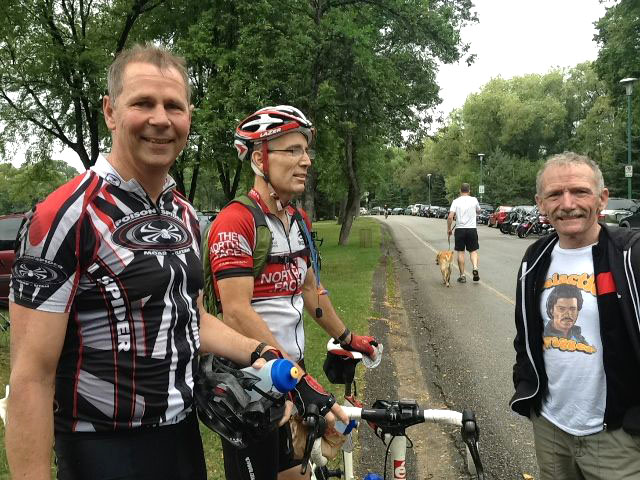 About 10km into the ride I did realize I’d forgotten something critically important. Chamois cream. Shit. It’s one of those things that you don’t use all the time, certainly not on shorter rides – but can be of utmost importance on a long-haul ride like this. Unlike gels or water bottles, it’s generally considered a little cheeky (if you’ll excuse the expression) to borrow someone else’s. So I went without.

Of the hundred or so of us that started, I managed to hang in until there was a group of about 16 of us off the front. I knew almost everyone in the group, so that was pretty cool. We kept a good pace, and given the company I was in, I was careful to stay out of the wind and anticipate surges and attacks to avoid getting gapped. We rode non-stop, completely avoiding the rest stops. The guys would peel off at various times into the ditches to do their business, then work together to rejoin the group – who would keep a controlled neutral pace until the pisseurs caught up. I have to say that this happened with alarming frequency. It seems that in spite of having the legs of clydesdales, some of you guys have the bladders of twelve year old girls.

At about 100km my bladder was screaming, so when a bunch of guys peeled off I decided I needed to join them. There was no time to dilly-dally and certainly no time for false modesty. I suspect a few of the fellas may have got a bit of a free show. Sorry. Or you’re welcome.

Eventually, at 130kms in Birds Hill park, a group of five of us got gapped and rode the final 35km together, just as it started to rain. Hard.

I don’t mind riding in the rain, but as it rolls on wet roads, your back tire has a tendency to spit up a big dirty rooster tail of gritty road water at precisely the height of the face of the rider directly behind you. If you are riding in a group, you have two choices: move out of the draft and into the wind to avoid the dirty rooster tail, or suck it up and just take it in the face. You can probably tell by my picture at the start of this post which I chose. It turns out that’s what Scottie chose too – leading to off-colour comments at coffee about Euro-porn which made us giggle for the next 2 hours.

Terrible segue, but there were massage therapists set up at the end of the ride offing rub downs to weary riders. Mike Payment figured that sounded like a pretty good idea. 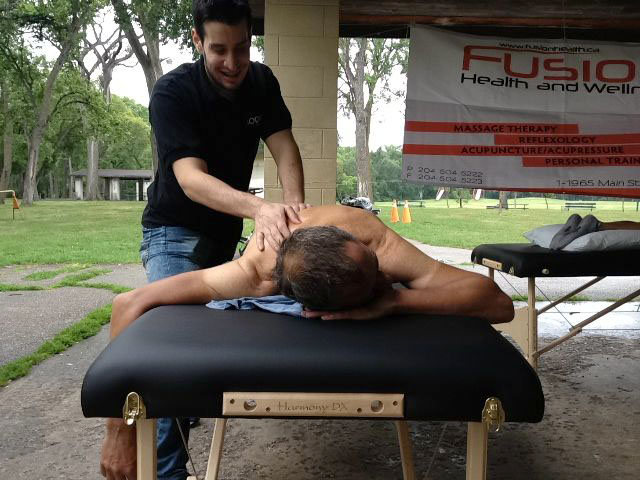 My computer crapped out before the ride started, once again confirming that bike computers are the shittiest and stupidest things on earth. We left at about 7:10am and rolled in at 11:45, so I estimate it took about four hours and 35 minutes to ride 165 kilometres. I was hoping to finish in about five hours, depending on conditions, so I am pleased with the result. I am also pleased to report that I rode in relative comfort in spite of my regrettable lack of chamois cream.

After the ride and subsequent hobb-nobbing was finished, I changed into some dry clothes in my car and met some of the other riders at nearby coffee shop, where I was able to wash my face and have a nice hot coffee to wash away the lingering taste of road in my mouth. I drove home, smiling at the memories of the day, and basking in the self-congratulation I indulge myself after any epic ride.

If there is anything I miss from my triathlon days, it is the numbers they use to mark the racers arms and legs when they register. The numbers are written on the skin in permanent marker and generally take several days to fade away. Until they do, they serve as a visible symbol to you and everyone around you of your accomplishment. Somehow, walking around with a dirty face for three days probably wouldn’t be quite the same.

Thanks to the organizers for putting together a very memorable event, and to everyone I had the pleasure of riding with along the way.

← Good Fences
The Rooster has Landed →