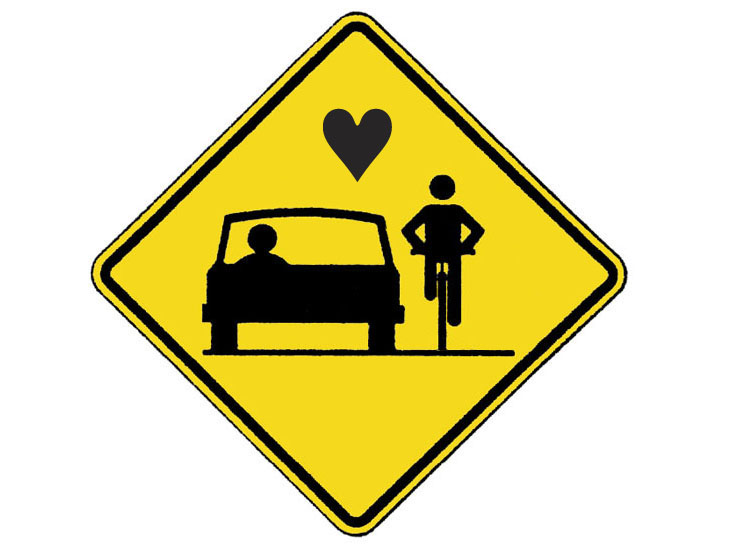 Share the Road – a popular phrase bandied about by cycling advocates, commuters and bike lovers everywhere. While it is used with the best possible intentions, these three little words form a statement that is (in my humble opinion) misleading, vague and quite possibly even dangerous. I’m no scientist, but isn’t the fact that cars and bikes mingle badly on roads the reason we have car-bike collisions? “Sharing the road” is not the solution. It is the problem.

Yes people, cover your children’s ears. In spite of what the nice man in the white van with tinted windows told us, not all sharing is good sharing.

I understand why the phrase is so popular. Sharing, after all, is such a happy and positive word. We share cookies, our feelings, and in the case of that one special someone, our beds (except for that unfortunate incident in Mazatlan, but I digress). The road is not for sharing. And certainly not with unprotected strangers.

“Share the road” provokes and encourages unwanted closeness and can lead to bad touching. Sometimes it is unintentional, like a gentle nudge into a ditch or parked car. Or perhaps the sweet caress of a door as it breaks your face.  Sometimes, it is intentional – like the impatient driver who forces violent rear-end intrusions by tailgating their unwilling cycling victims. Thank you sir or madam, I do not care to be ass-fucked by your SUV.

Sharing also implies a ridiculous and dangerous notion of equality. Cars and cyclists are not equal – not in size, speed, or quantity. Cars typically do not bleed or die when hit by a cyclist. And cars generally like to be on top.

Nobody, neither cyclists nor drivers, really knows what “Share the Road” means. Share it how? Cyclists assume the message is directed to drivers, drivers assume the opposite. So we stare each other down, wave our fists, and engage in passionate debates (“Fuck You NO Fuck YOU!”), each with our own supercilious feelings of road entitlement. And sometimes, we touch. Bad touch.

So what else, if not “Share the Road”, do we use to tell people what to do? How about something straight to the point like “Back off”. Too harsh? How about “Don’t touch me, I have a headache”.

The “One Meter Please” campaign is getting closer to a clear direction. It is polite request for drivers to leave one meter between their car and cyclists on the road. This assumes the general population knows how big a meter is, and how to approximate that distance from inside the sanctity of a large moving metal box. If we’re asking for a meter, why not ask for a whole lane? If we are at that point in our relationship where we are sharing stuff, why be shy about it? The point is, we need to leave lots of space between us. If there is space, there is less likelihood of any bad touchy-touchy.

When I was a kid my Dad often said “Good fences make good neighbours”. I took it pretty literally, since Dad never really liked the neighbours. But of course the meaning is figurative. A little bit of space and mutual understanding between people can make for a much more tolerable relationship, and dramatically decreases the likelihood of neighbours killing each other.

The reality is, I don’t think it’s just a catchy slogan we need – it’s not going to be that easy. We need to build those figurative fences with better infrastructure, education, and a commitment to make road sharing a safe and pleasant activity for everyone. Thankfully there are people way smarter than me who have figured out how to do that. People in places like Copenhagen, Montreal, Sydney and Minneapolis. All bike-friendly places that have integrated biking into their transportation culture, and are all the richer for doing so. We could learn a lot from them.