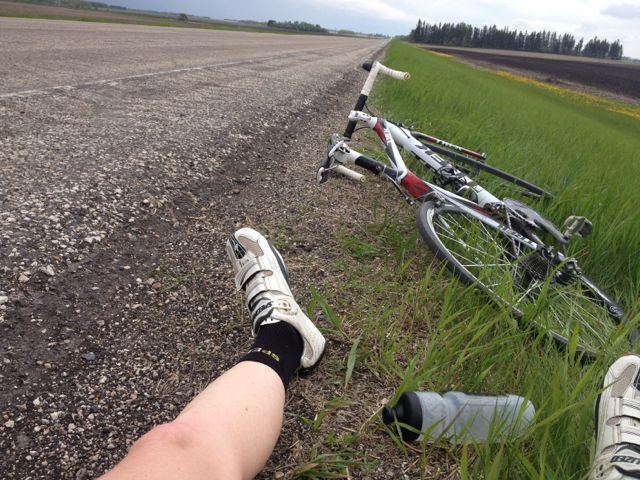 The last time I rode the Pembina Valley was also the first time I rode the Pembina Valley. If you’ll recall, I was pretty sure I was going to die on that first harrowing descent. The fact that I didn’t die made it possible for me to participate in last weekend’s Pembina Valley Challenge hosted by Woodcock Cycle and run as an Omnium (points) competition. I wasn’t entirely sure what that meant, but it sounded a lot like Omnomnom, so I figured at least the food would be good.

Seeing familiar faces at the start always helps calm the pre-race jitters. The only other racer from Dark Red Racing was Mel, smiling as always. And who wouldn’t smile if they had this sweet custom polka dot Pinarello! 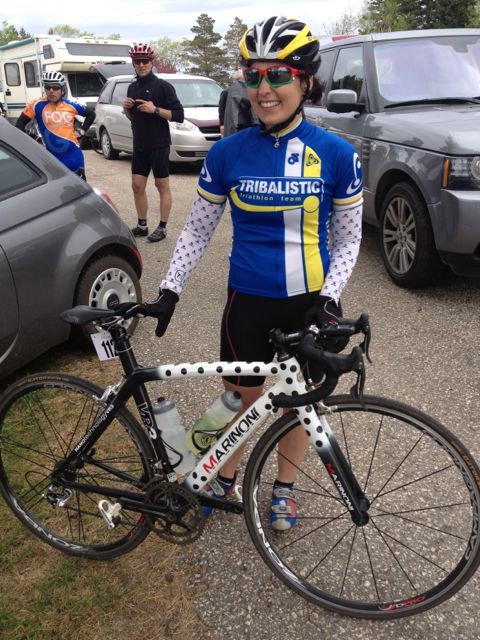 Ben and Scottie were there too. Scottie was there as Ben’s domestique – but heaven knows when it comes to climbing, neither of those guys need much help. 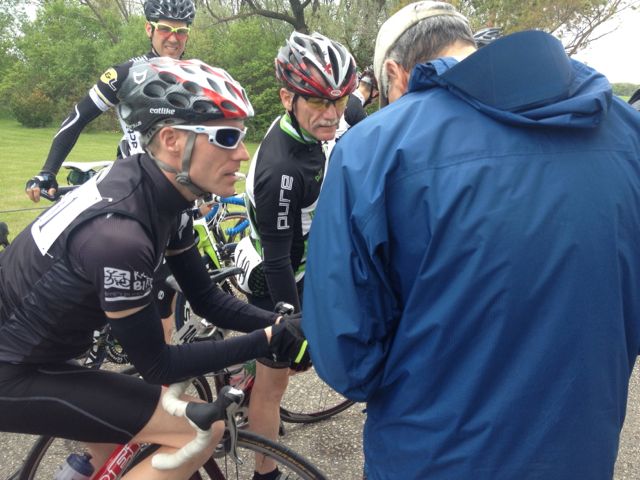 By some miracle, the C-Truck managed yet another successful voyage with Coach Rick at the wheel. This would be Rick’s first race after having a bionic hip inserted this winter. Way to go Rick! 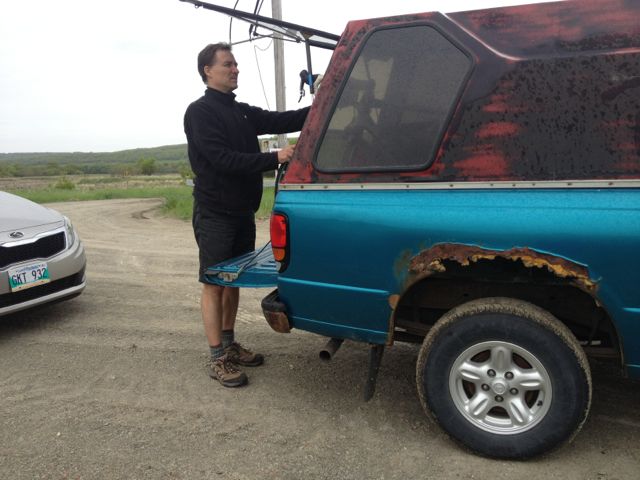 Now if only someone would do something for that poor truck.

The first event in the Omnonmon was a time trial. I really dislike time trials, so when I saw that it was only ONE kilometre, I surmised it was either a mistake or the best time trial EVER! The thing about valleys is that they are really just hill cleavage, and the time trial started right at the bottom of the cleavage, requiring one to ride upwards to the finish. Trust me, it wasn’t nearly as fun or dirty as that sounds. 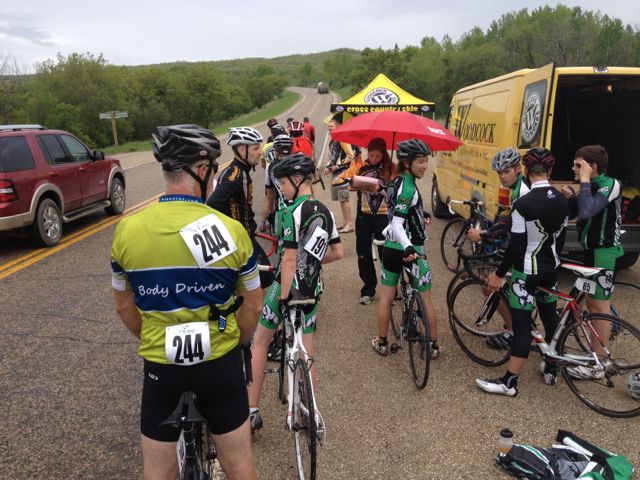 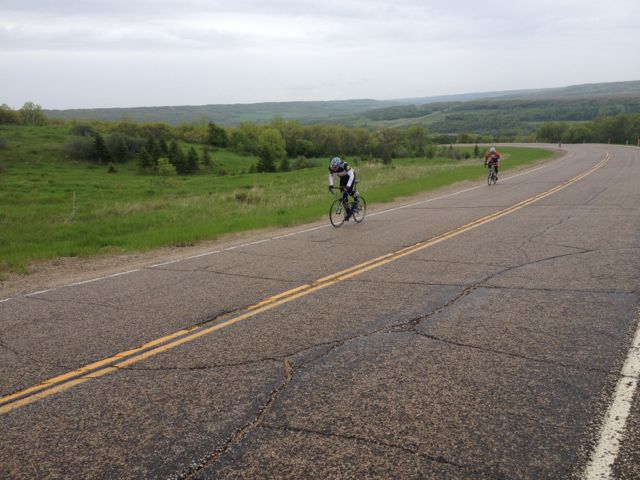 As much as it hurts to ride straight uphill as fast as you can for a kilometre, there is no denying how beautiful the Pembina Valley is. Especially from the top. 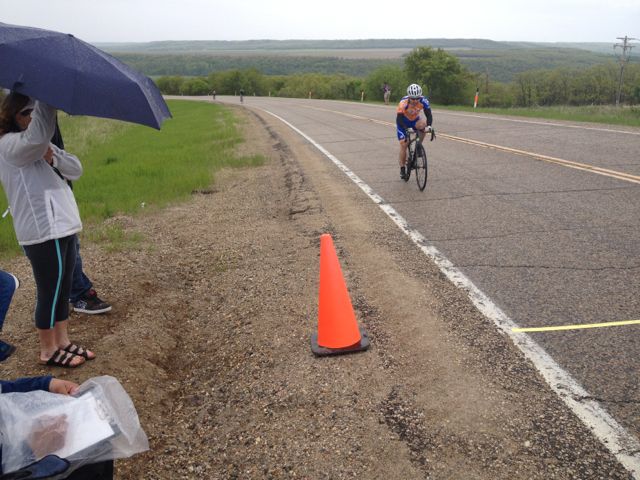 There is also no denying how awesome our volunteers are. 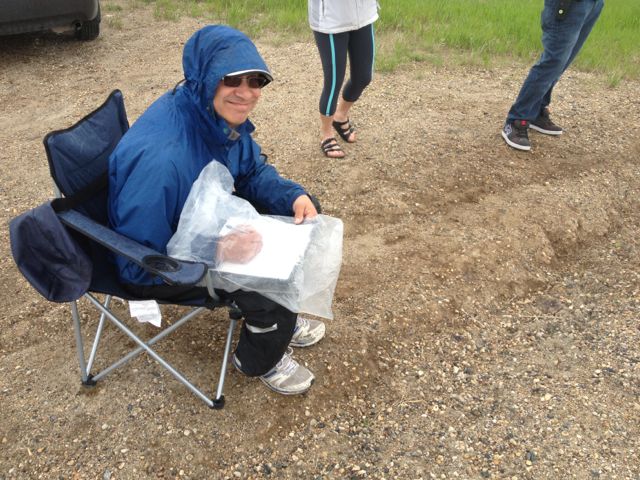 The second event was a road race, with Cat 4 racing three laps of a 25 km course which looked something like this (but greener and much bigger): 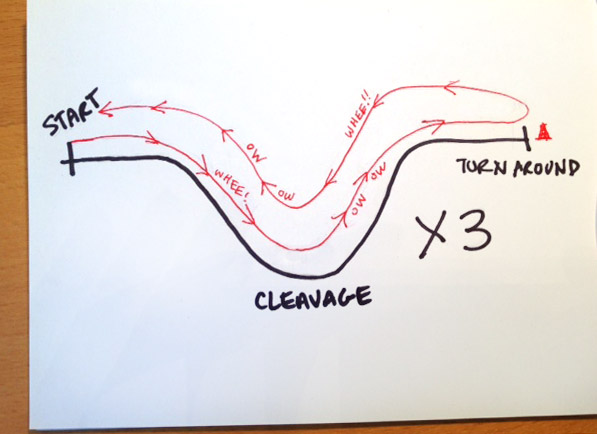 The first lap of my race was pretty relaxed until the second climb when the Belgians and Kids started to dole out the ass-whuppings. Needless to say I did not amass any KOM points.

A lead group broke out on the second climb and I fell off, but hoped to catch back on with the tailwind flat section. It was right about the time I was having these silly delusions that I saw people lying on the road. Oh no! One of the Brandon guys had rubbed a wheel and went down, taking Scottie and Ben with him. Scott was just getting back on his bike, but was (literally) a bloody mess. 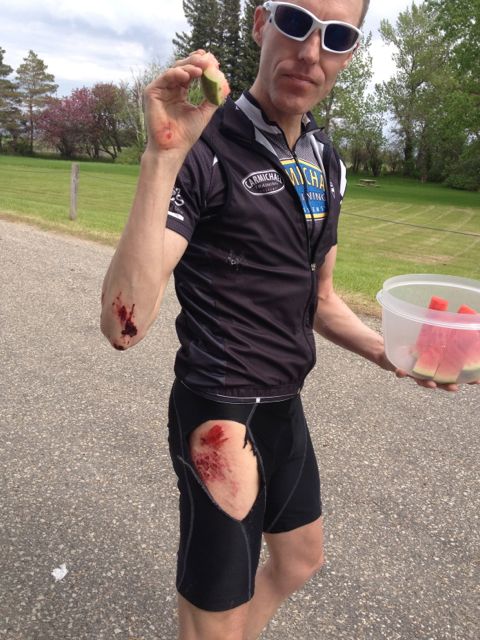 Much like The Dark Lord in the Catskills, Scottie rode with a potent mixture of rage and adrenaline, pulling me along until we picked up more riders and began to work together to catch the lead group. Incredibly, Ben joined us – also hurt but still riding. We pushed hard into the wind to catch the lead group at the start of climb #3. Then we climbed. And it hurt like the devil.

What followed was a series of gaps, bridging and all the things that make a road race both beautiful and miserable. Moments of strength and invincibility. Moments of pain and despair as you struggle to move your pedals in a circle. Moments of relief as you finally catch the right wheel.

I had managed to stay mid-pack until the second last climb. I was riding with Devo rider Sebastian, and finally had to let him go. I felt awful and I limped up the hill on my own and rode the last half lap alone, watching helplessly as everyone behind me passed by, losing 7 spots in the last 6km.

After a little finish line lie-down and 7-up kindly offered by race director Jeff, I mustered up the energy to ride the endless three kilometres back to my car.

As if the crushing weight of defeat weren’t enough, upon my return my appearance came under some scrutiny. Apparently a zebra print shirt, skirt, flip-flops, salt-crusted nostrils, runny mascara, and trailer park tornado hair do not fit some people’s idea of proper post-race attire.

To set the record straight:
1) I had come straight from the cabin and had limited clothing at my disposal
2) That was stupid
3) I did not, as was suggested, have a wedding to go to after the race
4) If I did, I certainly would not have gone dressed like a homeless cocaine addict 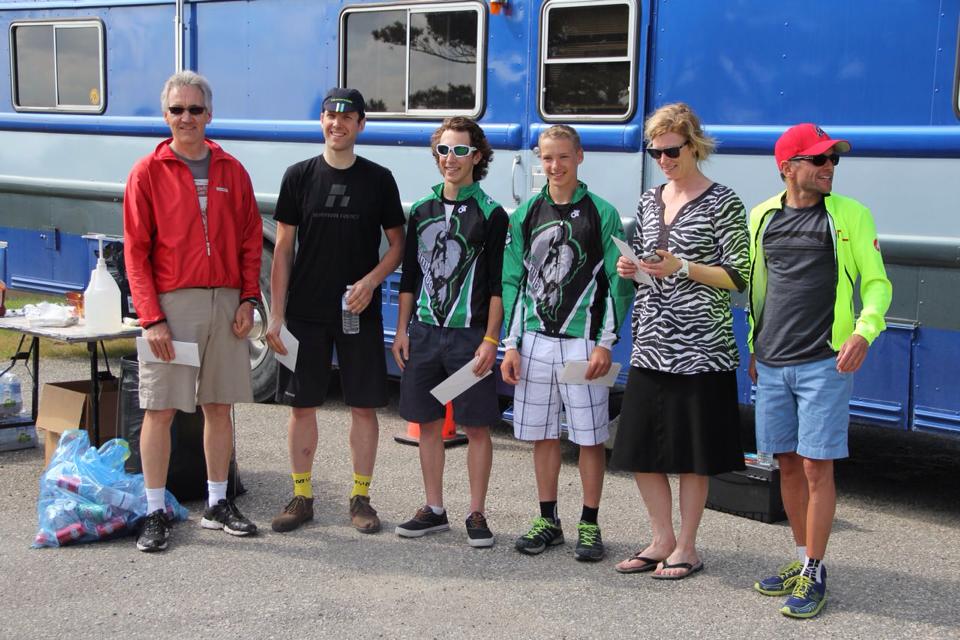 The Kids are riding well. Too well. They are making us look bad. A total sweep of the Cat 3 podium. In order to reverse this troubling trend, I’m afraid we all need to quit our jobs immediately and train more. 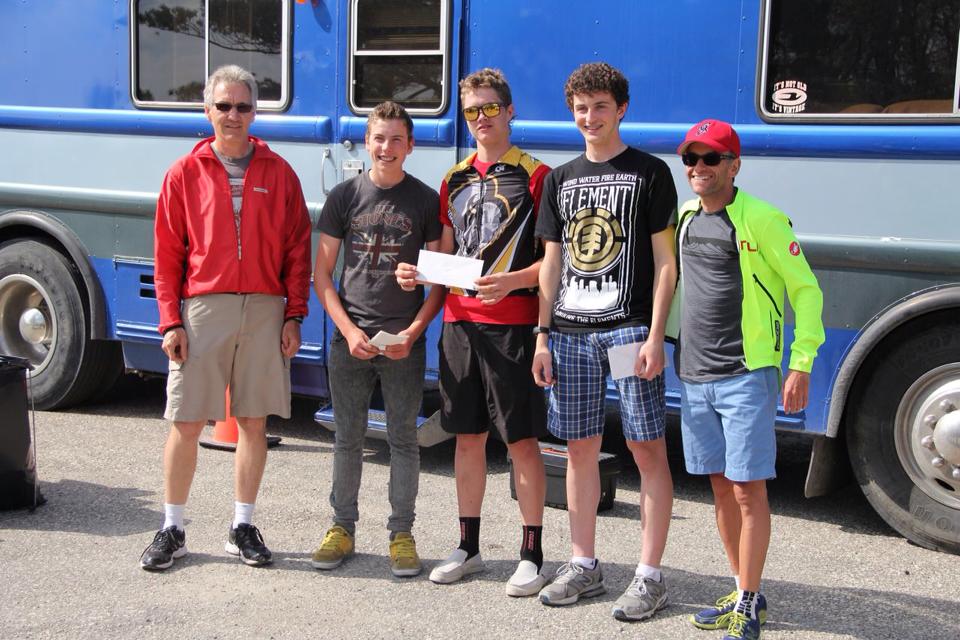 And by the way Willem, I hope you got as much flack about your outfit as I did about mine. Just saying.

Ben and Scottie completed the road race with the lead group, with Ben coming in third in spite of a busted helmet and badly sprained wrist. They are badass motherfuckers. If you’ll excuse my French.

Many thanks to Woodcock, Jeff Ayres and race sponsor Danny Bubis of Tetrem Capital Management, as well as chief commissaire Arlene Woodcock and the volunteers who made this race possible. It was a really interesting and challenging format that was a great addition to the race calendar.

Now stop reading and go do some power intervals people!

← Remember Winter?
The Impaler has a Posse →