Warning: Use of undefined constant BloggerRedirector_Use301 - assumed 'BloggerRedirector_Use301' (this will throw an Error in a future version of PHP) in /nfs/c01/h03/mnt/37062/domains/winnipegcyclechick.com/html/wp-content/plugins/blogger-redirector/blogger-redirector.php on line 19
 The Positive Power of Negative Suggestion – Winnipeg CycleChick

The Positive Power of Negative Suggestion

There is nothing that motivates me to do something more than being told I shouldn’t do it.

You might say “it’s a chick thing”, but if you did, I’d probably call you a silly twat. Gauntlets, both literal and proverbial, have been thrown since the dawn of humanity, and both the tossing and retrieving of one has more to do with what’s in your heart than what’s in your pants.

I suppose one could argue that being told you can’t or shouldn’t do something isn’t the same as being dared to do it, but for many of us the end result is the same. Not only will I do what you’ve told me I should’t or can’t do – I am going to do the fuck out of it. Likely poorly.

One evening last fall I was at a cycling soiree – you know, one of those fancy evening things where the bike community gets together and stands around awkwardly trying to figure out who’s who without their helmet and glasses on. I was having a lovely conversation with an older gentleman I’d just met, discussing (what else) cycling and travel. I mentioned I was going to Tucson in March and excitedly described my tentative itinerary, which included the legendary Tucson Shootout.

The Shootout happens every Saturday morning, and is known far and wide as one of the best (and fastest) group rides in the U.S. It is so good, in fact, that it is regularly attended by pros doing their spring training in Tucson. An intimidating ride for sure, but I wanted to see and experience it first hand – if only for the millisecond before I got dropped like a baby giraffe.

No sooner had the word “Shootout” shot out of my mouth than the gentleman started to laugh and shake his head. When he had composed himself, he told me I’d never be able to do the Shootout. Or something to that effect – I couldn’t quite make out the words because of the murderous hissing in my head. I smiled politely and shrugged my shoulders, knowing the Shootout had now moved from tentative to mandatory.

Before you get the impression that me and my bull-headed brethren are reckless yahoos that will throw all cation to the wind just to prove something, this inclination only applies to things we actually want to do, and will not hurt or gross us out in any way whatsoever. You can double and triple dare me, call me the biggest pussy in the world, but I will never EVER eat a whole bowl of radishes. Or wear a pink jersey with flowers or butterflies on it. Ever.

But if there is something just beyond my ability or comfort zone – something I am considering but doing my damnedest to talk myself out of – telling me I can’t do it is the surest way on God’s green earth to make me try.

How is it that while our own little self-doubts hold us back from new challenges, the doubts of one nay-sayer is all it takes to pick up that gauntlet and shove it right up their chamois? Is it pride? Maybe. Is it immaturity? Fart. Whatever it is, it gets me off the couch and out doing something that generally involves personal discomfort.

Speaking of discomfort, the Shootout was positively awesome. 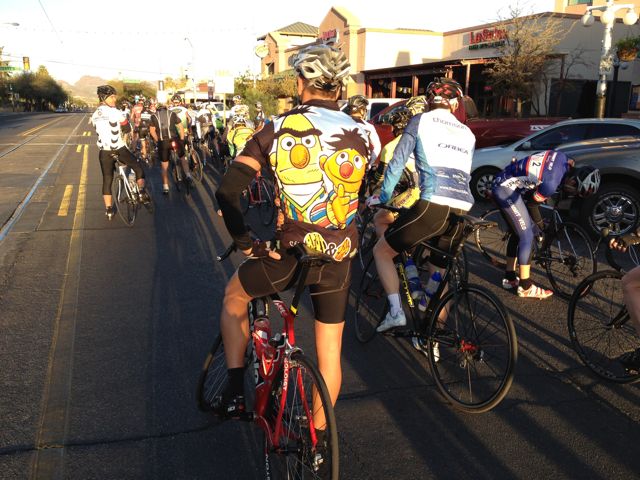 p.s. I would like to add a special note of thanks to the anonymous individual who, on this very blog a couple of years ago told me I shouldn’t race again.  If it wasn’t for you, I probably wouldn’t have.

← It’s spring. Time to check your nuts.
A Letter to Halfwheelers →