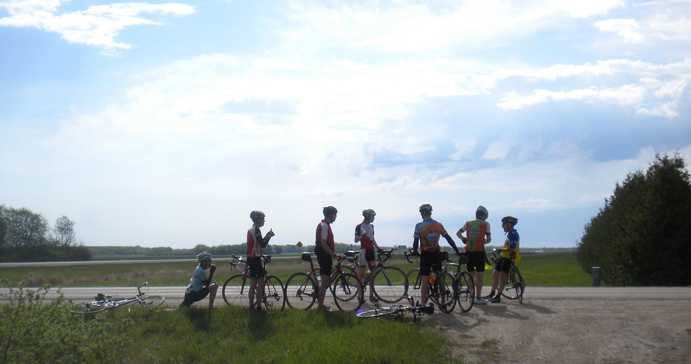 It’s early in the season and we’re all excited to get outside and ride, whether we’ve spent hours in the basement on the trainer or making fun of those that do. Either way, it’s easy to forget some of the rules of riding with others when you finally do hit the roads for real. Halfwheeling is easily one of the fastest ways of raising the hackles of your riding buddies. It’s a cardinal sin of group riding etiquette – right up there with blowing snot at the front of the line – so let’s nip it in the proverbial bud.

Before you get your chamois all in a bunch, we’re writing this for your own good. While halfwheeling is generally considered a dickhead thing to do, we’re pretty sure  you’re not a dickhead. Chances are you’re new to the group, or don’t even know you’re doing it.

Just to review, halfwheeling generally occurs while riding in a social double paceline. This formation is very common on large group rides, because it’s a great way to ride with people of varying abilities who want to enjoy each others’ company. When done properly, it looks something like this:

See how nice and organized that is?  This is a rotating paceline, where the first two riders take a turn at the front for a little while, then carefully move to the back of the group, like so:

This gives everyone a turn at the front, as well as a nice long rest between turns. It’s important to keep a relatively even pace throughout the rotation, so things stay predictable, organized and safe. A good way to do this is checking your computer right before you get to the front and maintaining the same speed once you get there. It’s also important to keep your handlebars in line with the person beside you. Think of it as a way to almost hold hands with someone other than your spouse without getting in trouble.

Here’s where you come in: the Halfwheeler. Once you reach the front of the line, you increase your speed, thereby pulling ahead of the person beside you, like so:

This makes a big mess of the paceline, either staggering it like this:

Which happens because your buddy has decided you can go fuck yourself and maintains the original speed, while the riders behind you are forced to speed up to keep in the draft. This makes them unhappy.

Your buddy feels the need to match your testicular fortitude and speeds up to join you, at which time you decide this game is SUPER FUN and speed up again. People start to struggle with the increase in speed, causing big gaps to open and pandemonium to ensue, kind of like this:

See? You’ve made a big mess of things behind you, but are completely oblivious because you are so far ahead of everybody else. Without meaning to, you’ve told your riding buddies “Hey, I’m way faster than you and if you want to ride with me you need to go faster”.

It’s unsafe, uncool, and makes you look like a bit of an asshole.

Which, as I’ve mentioned, we’re pretty sure you’re not.

What you are is strong and fast, and there are plenty of ways to feed your need for speed rather than ripping off the legs of your poor riding buddies. So cut that shit out and let’s ride.

With love and affection,