The Glorious Indignity of Winter 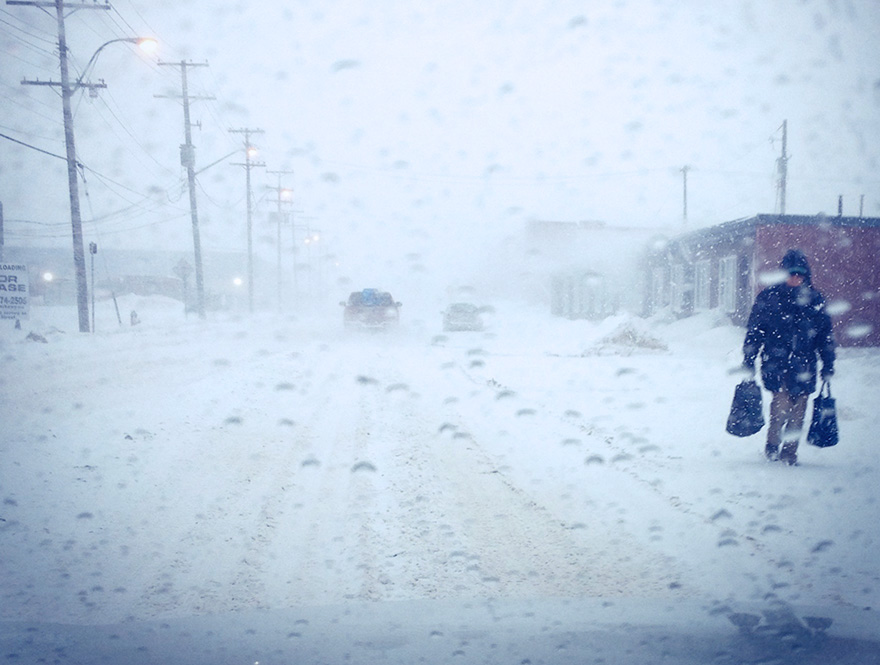 This winter has been cruel. Even by Winnipeg standards. For much of December and well into January, temperatures reached an ungodly -40°C (that’s -40ºF for you Yanks, and -30°C for those of you do don’t believe in wind chill) and we have received enough snow to put half the city in the emergency room with shovelling-related back injuries and the other half in the morgue from heart attacks.

We Winnipeggers (yes, that is what we call ourselves) channel our inner Chicken Lickens as we chirp dire weather warnings at each other from the comfort and sanctity of our twitter accounts. Those brave and stupid few who do go outside shuffle past each other in stylish Northface parkas wondering what they could sell (or who they could kill) to get on the next flight to Cancun. The general consensus, even for the irritatingly chipper glass-half-full crowd, is that the weather can only be described as bullshit.

If cycling happens to be your sport of choice year round and you were stupid enough to marry for love and not money, this time of year presents you with two equally unsavoury options:

Ride the Trainer
Riding a stationary trainer indoors is boring, sweaty, and quite possibly one of the most fruitless activities a person can do. Much like a hamster, you can spin your wheel for hours on end and get precisely nowhere. Sure you can work on your V02 max or what have you, but you’ll probably want to keep that to yourself since other cyclists (most of whom indulge in stealth training themselves) will make fun of you for doing it so far out from race season.

Ride Outside
Certainly the more interesting and fun of the two options, riding outdoors in the winter does not come without a price. I’m talking about everything from a 30 minute commute to the office (which is exponentially more treacherous than its summer equivalent), to long endurance rides of an hour or more. The specialized™ gear and supplies needed to keep you warm and comfortable can be both cumbersome and expensive. You’ve no doubt seen plenty of Fat Bikes by now, the latest ‘it’ bike for the winter cyclist that’s built more like a two-wheeled snowmobile than a bicycle, but will float over snow that will sink a traditional bike to its axles. Built more for function than sex-appeal, fatties are the ski pants of bikes, and people are buying them by the boatload. 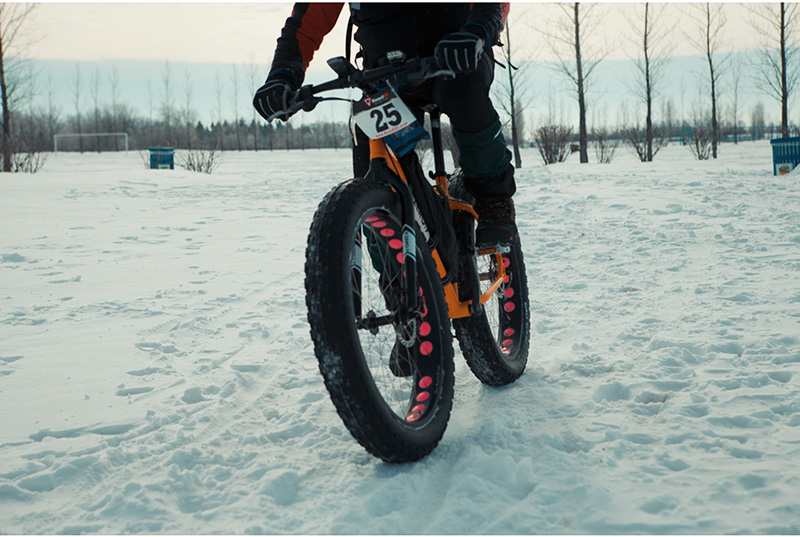 Speaking of ski pants, dressing for long rides in the winter falls somewhere in that murky grey area between art and science. It’s hard to believe that a person can wear up to eighteen articles of clothing and still be cold, but it’s true. Between the base layers, vapour barriers, warmth and wind layers, once you have  exhausted all of your layering options, the real indignities begin. Things like smearing vaseline all over your face, wearing surgical gloves, and stuffing your man junk into a Ziploc baggy – all practices that skirt that delicate line between fashion atrocities and just plain illegal. (I can only attest to the efficacy of two of the three).

As a relative newbie, I have found the simple act of winter commuting anything but simple. After showering and gathering my work clothes, it takes me close to twenty minutes to locate my eighteen items of clothing, put them on, and get out the door. With all due respect to Mr. Colville-Andersen, winter commuting in Winnipeg does not look like this: 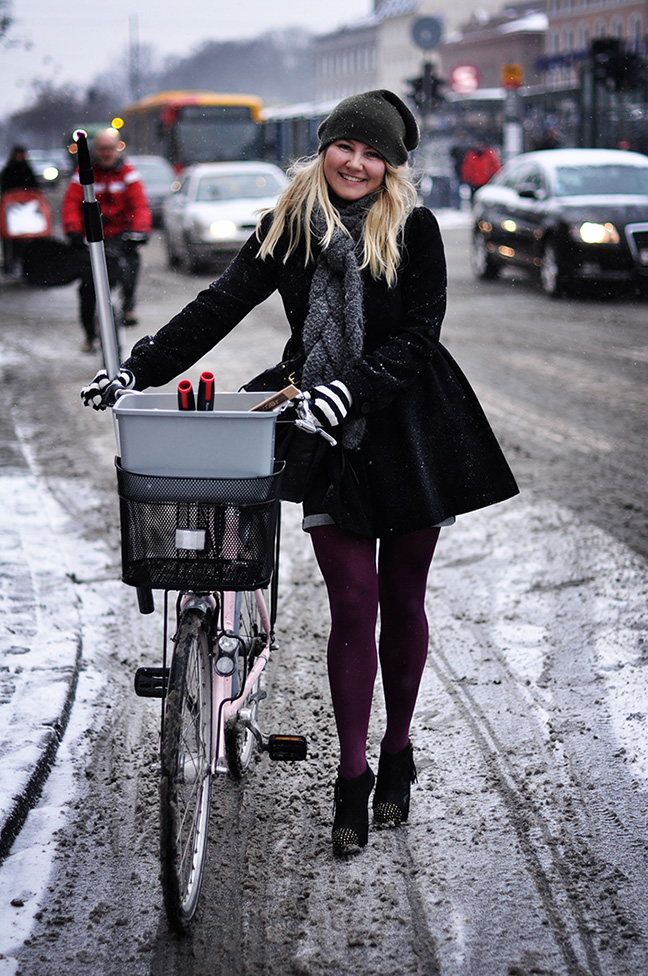 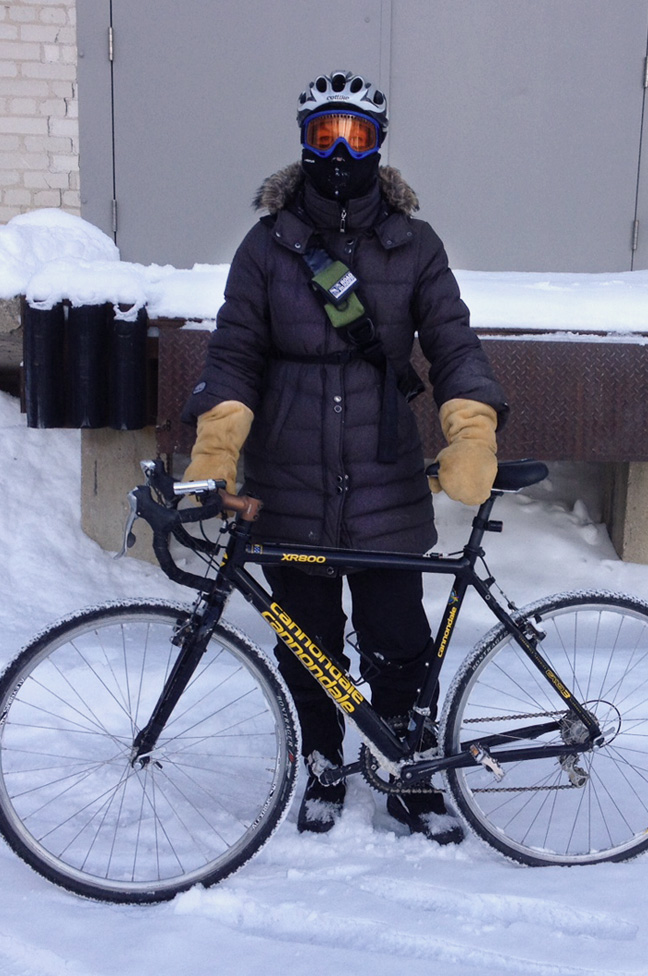 The inevitable question I am leading you to is “Why?”. “If riding a bike in the winter is so unpleasant, why do it at all?” It’s not a simple answer, but I’ll start with the easy stuff – things like the health benefits, fresh air, not being stuck in traffic, being good to the environment, and enjoying the outdoors all year round in spite of whatever bullshit nature decides to smite us with. There is something gratifying in this simple act of defiance that can put a real spring in your Sorel-laden steps.

And then there are the amazing things you see out riding that you would miss if you stayed on the beaten paths behind the windshield of your car. Things like giant ice blocks waiting to be carved into sculptures, and your whole city skating, running, walking, skiing and riding on the frozen river on a Sunday afternoon. 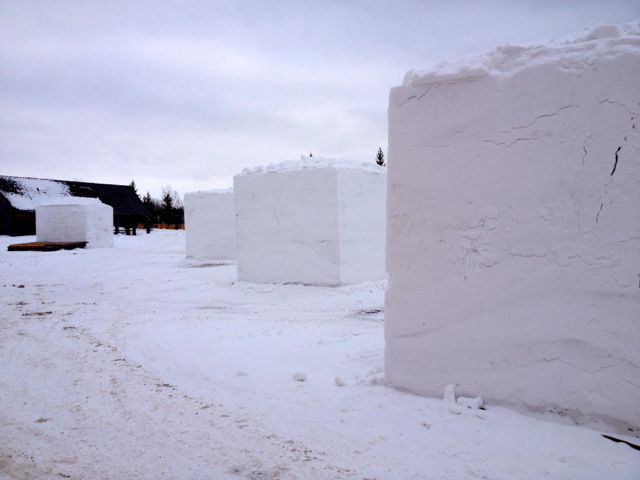 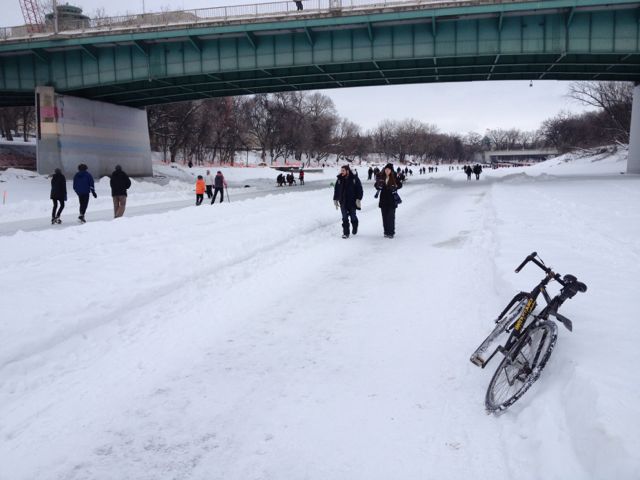 And, of course, your riding buddies’ funny beardcicles. 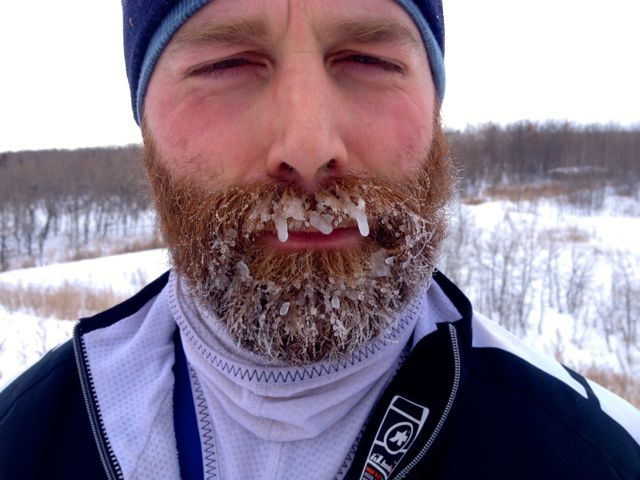 The biggest reason of all is the one that is hardest to explain, but I’ll try. When you really love something, you will tolerate all sorts of unpleasantries that you would normally find abhorrent. Like cleaning up your dog’s shit, or watching Cinderella with your little girl for the two hundredth time instead of the final game of the Stanley Cup playoffs. So when you see some shapeless blob on a bike skidding around on a shitty winter road, or a friend proudly tells you about the killer interval workout they did in their basement on Saturday morning, sure you can probably assume they are a little bit nuts. But you can also be sure they are the kind of person that would hold your hair when you throw up or drive you to the airport at 3am to catch your flight to Cancun.

Heck, they might even shovel your driveway while you’re gone.