September 1, 2016 · by CycleChick · in Musings, Uncategorized

He looked at me, confused.

“My arm hurts.” I figured this would be obvious, “I can’t do anything. And my hair… I look like a crazy person.”

Before I left the hospital, I was told to make an appointment to see my surgeon one week after the accident. It seemed far too soon, after all, I still have the sticky tape residue from the morphine drip on my arm. Mind you, I am too scared to shower, so it’s not a big surprise. Needless to say, I’m sure he misses me – I felt a real connection, or as much of a connection as one can feel under the influence of morphine to a grown man wearing a shower cap. (Note to self: speak surgeon about shower cap, it’s unbecoming of a man of his stature and excessive education).

The last time we spoke, I remember him standing there in the shower cap talking to me about what he did in the operating room. I’m sure what he was saying was very important, but the puffy blue cap on his head held my undivided attention. The morphine, made it, well… hilarious. Hopefully, the follow-up appointment would fill in the gaps I missed. Hopefully, he would not be wearing the cap.

Someone missed the part where they were supposed to tell me I needed to get an X-ray. Embarrassed, I offered to do a sketch to give an approximation of what I thought my x-ray might look like. He politely declined. I should mention that he was not wearing the shower cap, and looked far more distinguished as a result. It was my turn to look hilarious.

He explained that the primary reason for the appointment was to examine the wound, which he was concerned about. Apparently the skin around my elbow, or where my elbow used to be, had been badly damaged in the accident. The plate inserted into my arm was quite large and the remaining skin had to be stretched around it in order to close the incision. At this point I may have passed out for a short period of time. I was informed that the stitches would be removed and I would be outfitted with a less primitive and gargantuan cast. I think there must have been a contest among the surgeons to see who could be the first to fit an entire bocce set into an arm cast. If so, my surgeon certainly won. The goddamn thing weighed a ton.

The nurse was called in to remove the stitches. He was a short and muscular Filipino with long hair and lots of tattoos – someone you might expect to see on Forged in Fire, a show I got stuck watching about guys who make swords and axes. I had been watching a movie and was too sore to reach for the remote when it was over. I watched three entire episodes before my eyes started to bleed and I went to bed.

I became very anxious when he started cutting off my cast with the cast cutter. He struggled to saw through the countless layers of plaster and bocce set. Perhaps if he had used a Viking axe it might have gone smoother. Under the cast my arm looked lifeless and pathetic. It was a weird color and didn’t really seem attached my body. When he asked me to put it on the table so he could take stitches out, the request seemed insane. How could I possibly move this lifeless thing onto the table without passing out from the pain? I feebly flopped my arm painfully on the table, and he started snipping away at the staples and twine that held my arm together like a stuffed turkey. It was shockingly painful. I remember being told at some point in the hospital that my incision was small. So as he kept snipping, and snipping, and snipping, I asked him how big the incision was.

“You want me to take a picture?”

“Yes, a picture. So you can see before and after.”

“Um, ok, that would be cool.” I said, knowing full well it would not be cool.

I rummaged through my purse with one hand and pulled out my phone. He carefully lined up the shot and took the picture, proudly handing me back the phone. When I turned the screen back on, this is what I saw: 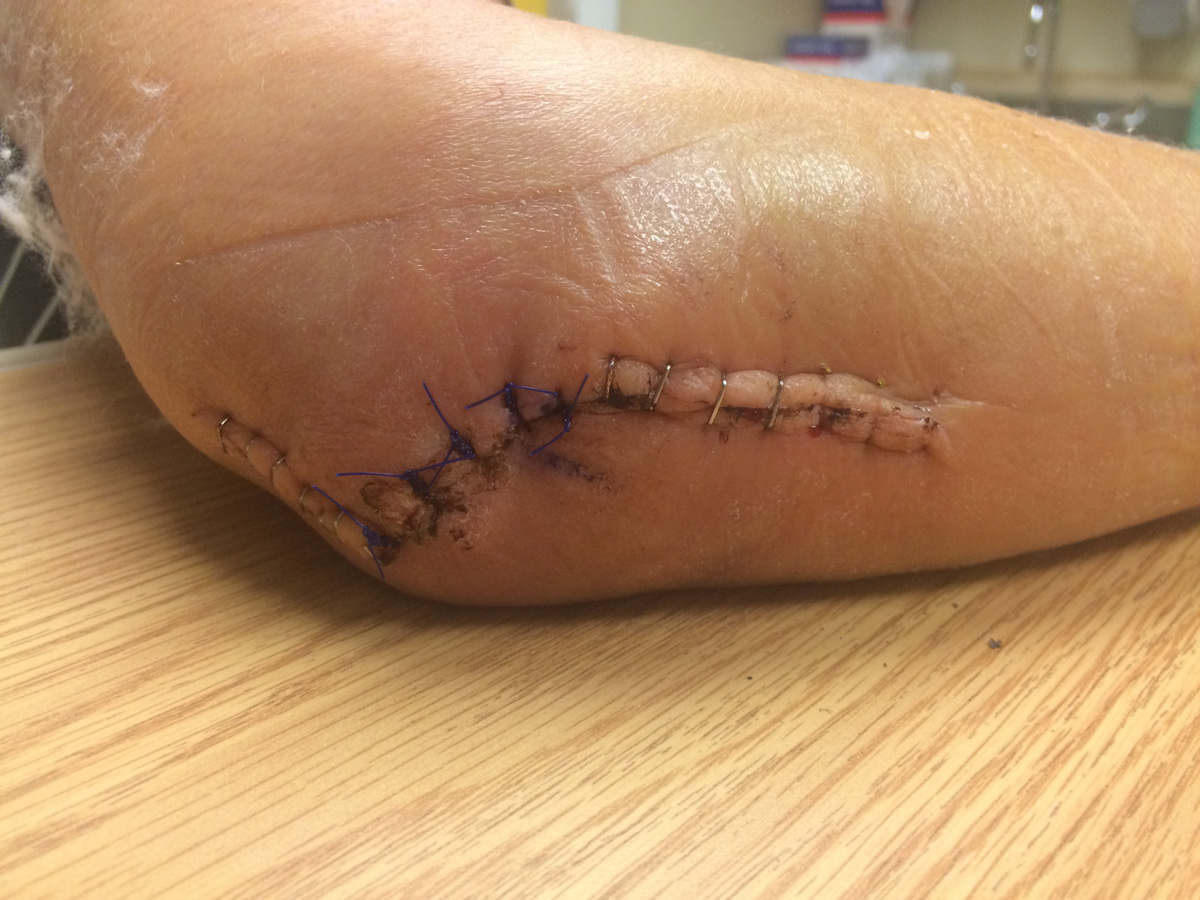 Don’t say I didn’t warn you. Here, let’s make ourselves feel better with some googly eyes. They make everything hilarious. Sort of like a shower cap. 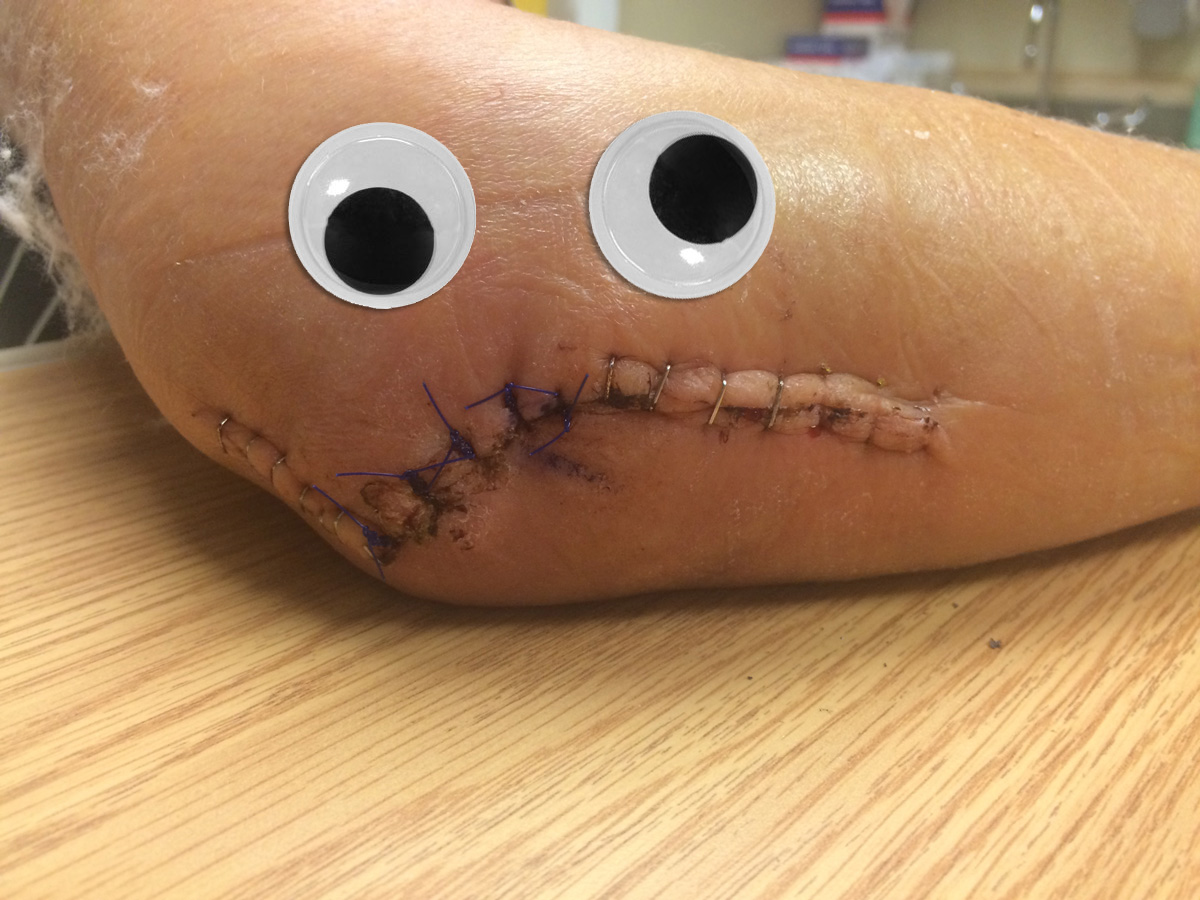 The hubby clarified that what the surgeon had actually said was that if the damage wasn’t too bad and he was able to repair the damage with pins, the incision would be small. But the damage was bad. Since they had to use a steel plate the size of a cookie sheet, the incision had to be equally enormous. They say that chicks dig scars. That may be true, but it refers to scars on other people. My elbow looks like an uncooked order of Chicken Kiev.

Yes, there are worse things. I know. Considering some of the other terrible things happening in the world and even in our own small cycling community, my troubles are pretty insignificant. But talking about terrible things can make them seem less terrible, no matter how terrible they are.  In fact, they might even become hilarious.

← A Humerus Thing Happened on the Morning Ride
Convalescence →