Goodness, how time flies. It’s been almost six weeks since I hit the deck, and I’m not going to lie, convalescing pretty much blows. It’s frustrating, boring, and not without its fair share of discomfort. That said, I’ve been spoiled rotten by my friends and family, and haven’t had to do dishes or wear a bra in over a month. The inconveniences, such as they are, are pretty minor by comparison. For example, I can’t shave my left armpit, so it’s quite itchy. I also can’t really style my hair, giving me the appearance of someone who wandered away from a wild night in a psychiatric ward. It sounds bad, but on the upside, the chatty seniors at Safeway leave me alone, and most of the people I bump into on the street avoid eye contact and excessive small talk. I should have done this years ago.

As far as my arm goes, they took my cast off two weeks ago, with the expectations I would: a) take it easy, and b) not fall down again. As soon as I was released from the hospital I walked four blocks up the street to get my hair done, then came home and painted the porch. It’s a good thing they didn’t speak to the hubby, or I’d probably still be strapped to a gurney in full traction, completely sedated.

I am expected to do a series of painfully tedious exercises three million times a day in order to try to increase my range of motion, which is currently about four degrees. Thankfully I can drink wine using either hand, otherwise I would be forced to use a straw. And don’t think I wouldn’t do it – when it comes to getting wine in my mouth, I’m kind of like those moms you read about who lift burning minivans to save their children. I would do pretty much anything.

The pain (thanks to the wine) is pretty manageable, except when I’m sleeping, when drinking becomes a bit tricky. I’ve avoided the borderline illegal painkillers they have prescribed in the hopes of selling them on the black market to buy more high-end bike parts. Instead, I have opted for a Tylenol/Advil cocktail that seems to keep things under control until about four in the morning when I wake up in considerable discomfort. On a particularly challenging day, I deployed an ice pack to try to numb the pain, only to encounter what could be described as the worst Slurpee headache EVER in my arm. I won’t be trying that shit again. The experience has me more than a little concerned about the effects of the impending Winnipeg winter. I should probably relocate to somewhere warm like the Bahamas, where the temperature is sure to be more conducive to healing.

The surgeon has actually recommended that the hardware in my arm be removed in about six months. Perhaps that is how long they have before Home Depot will no longer accept the return of the plate and drywall screws. This may disappoint my friend Dave, who had rather hoped I would opt for an upgrade, as opposed to a complete removal. 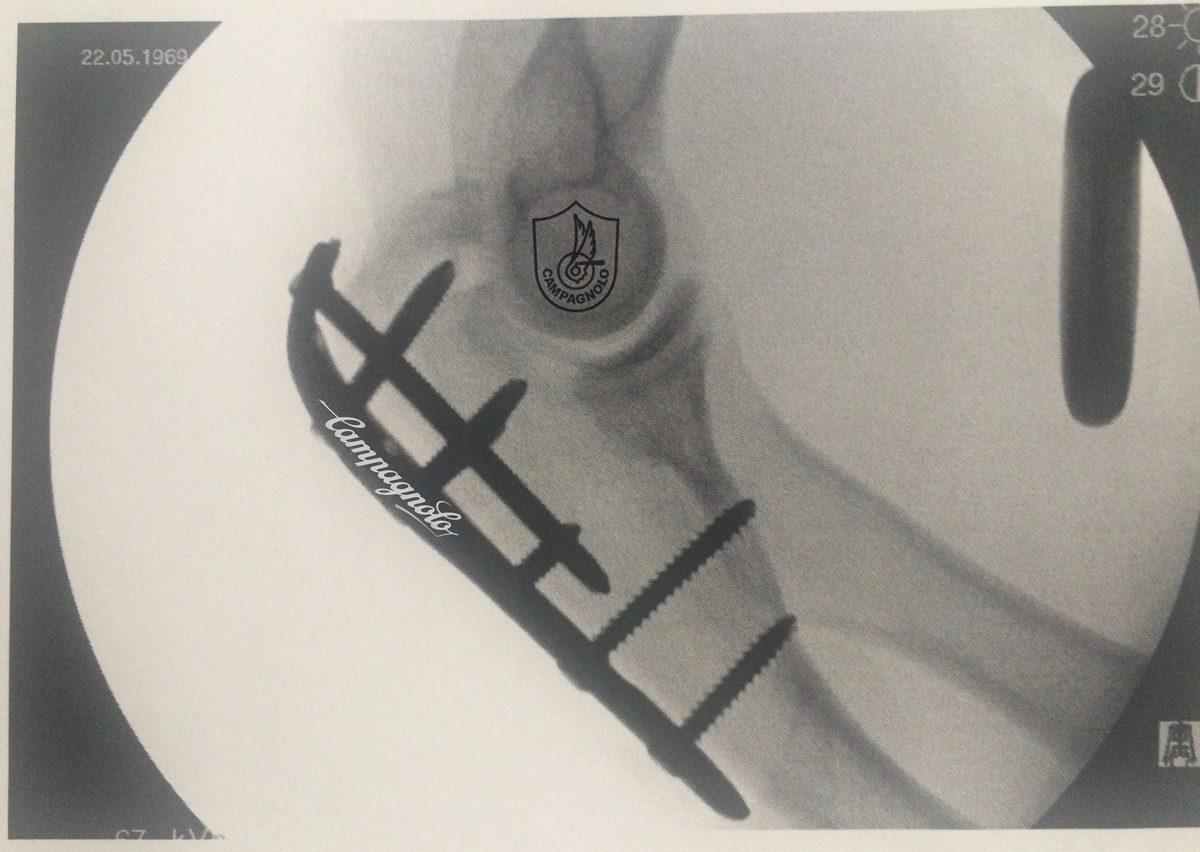 I have been trying to figure out a way to ride my bike, which just came back from the shop with a shiny new set of not-broken spokes and some swanky new not-shredded bar tape. Having converted to rollers several years ago, I wasn’t entirely excited about a return to a stationery trainer, but I suppose it’s better than nothing, and certainly better than ending up in emergency with another broken arm. After the clumsy and painful process of getting the bike home from the shop, out of the car, into the basement and clamped into the trainer, I managed to get myself on the saddle with all the grace of a hippopotamus trying to mate with a greyhound. After all that trouble, it became apparent there was no way I could reach the handlebars, much less put any weight on them. This was enormously disappointing to both me and my greyhoundappotamus baby. Since therapy is expensive, I turned to Twitter to whine about my misfortune and was delighted to receive some great suggestions to help make riding the trainer more comfortable and effective.

Like this stroke of genius. I bet if you put googly eyes on that ball it would be hilarious. 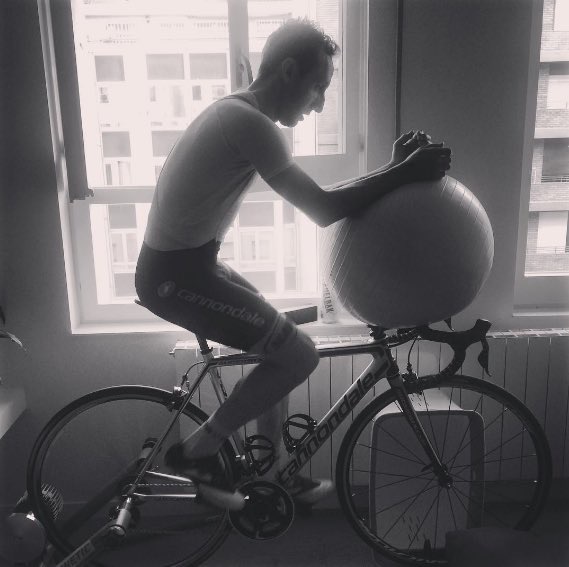 Or there’s this brilliant, if utilitarian set-up by badass Mathew Hayman, who broke his humerus in late February, and then won Paris Roubaix – the longest, shittiest, bumpiest bike race in the world – two months later. Thanks for setting the bar so high, pal. I’d like to see you put on a bra. 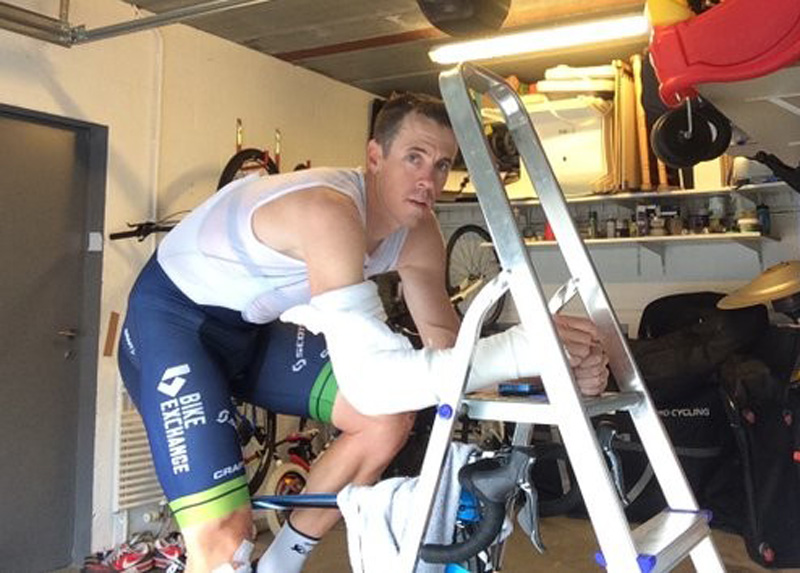 I still need my ladder to finish the porch, but the exercise ball might be an option. If that doesn’t work, I could always use this as an opportunity to practice riding with no hands. When I mentioned the idea to the hubby, he was quick to point out this would also free up my hands to juggle chainsaws. He is so helpful.

For now, my goals are simple:

Thanks to everyone who has taken the time to write, visit, and be otherwise awesome during this challenging period of convalescence. Mostly, just thanks for listening.