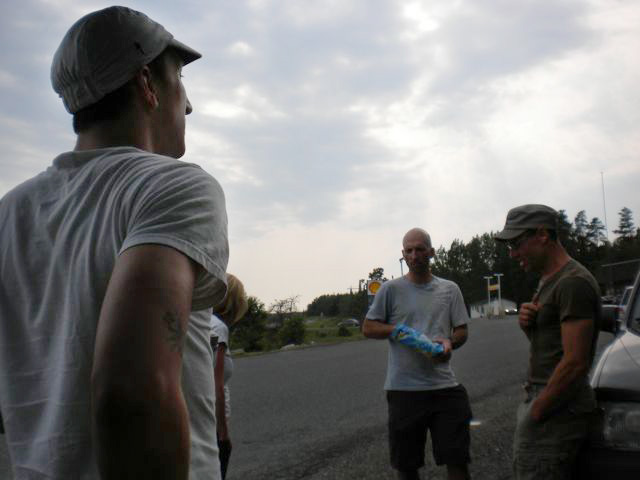 As you may have heard, there’s a little bike race happening in France right now. For cycling enthusiasts the world over it is the best of times, and it is the worst of times. Watching our heros ride their guts out day after day up and down the Cols and Alpes of obscure European provinces can prove to be a poignant reminder that we are…not.

So when the opportunity arose to go ride in the picturesque and hilly Whiteshell for a day, I could not say no. Especially since it was scheduled for the fourth of July, a day our American neighbours commemorate the signing of the Declaration of Independence, which freed them from the Kingdom of Great Britain as well as a whole bunch of extraneous vowels in their words. Here in Canada, our relationship with the Queen is, well… complicated. But I asked myself “Why should the Yanks have all the fun?” What better way to celebrate one’s independence AND the Tour than ditching work and riding your bike all day.

Stage 1 – Grand Départ
We gathered at the start line – a highway gas station at Clearwater Bay, where James and Dan were already waiting, looking appropriately and casually deliberate. They had been there since 2am carefully reviewing tactics and loading their jersey pockets with Red Bull and Slim Jims. 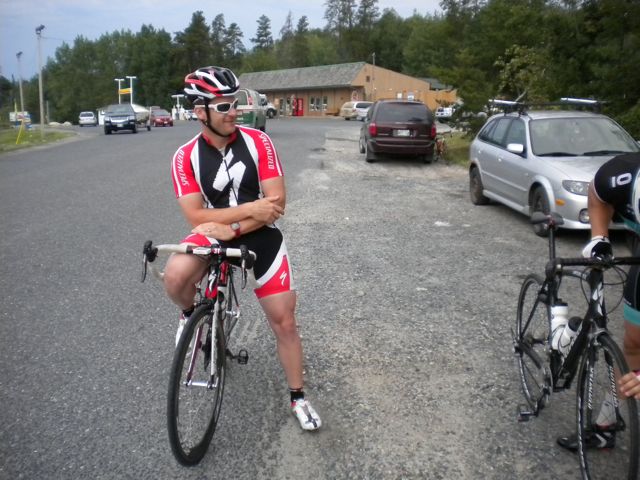 Time to assess the competition. Dave was looking fierce in his Yoohoo jersey. Sides were pinched and asses were checked.

Stage 2 – Clearwater Bay to Alpe de Keewatin
After a short and congenial start along the highway, the race started to take shape. I took this picture moments before opening up a crippling lead that left the peloton in shambles. 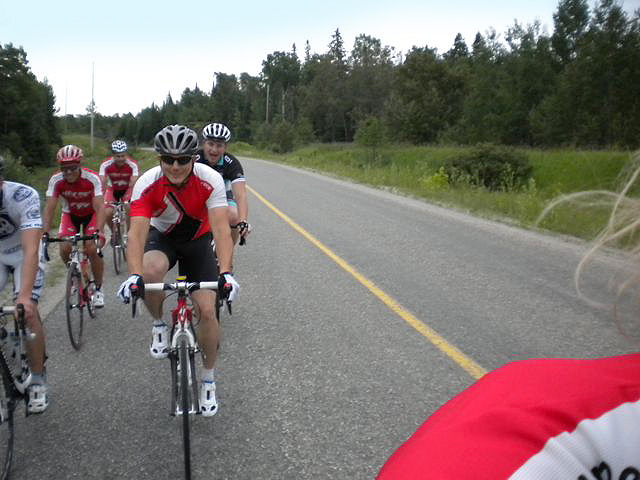 Unfortunately I was quickly reeled in by James and the rest of the group. Who put these stupid hills here anyway? 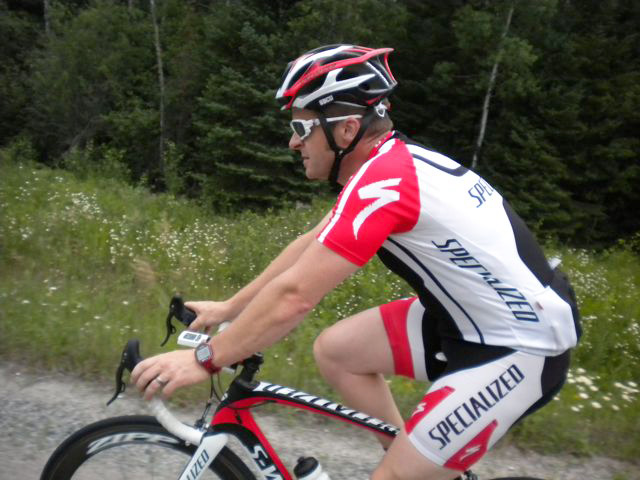 Dan passed by, showing his displeasure with my early attack in a series of obscene Polish hand gestures. 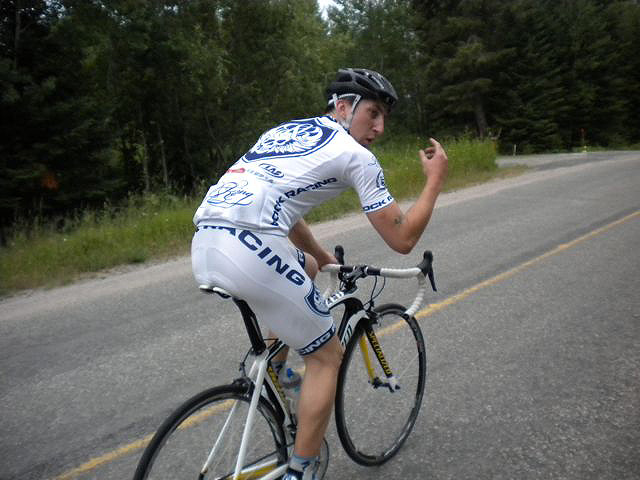 I was soon swallowed up and spit out the backside of the peloton. They would pay for this. 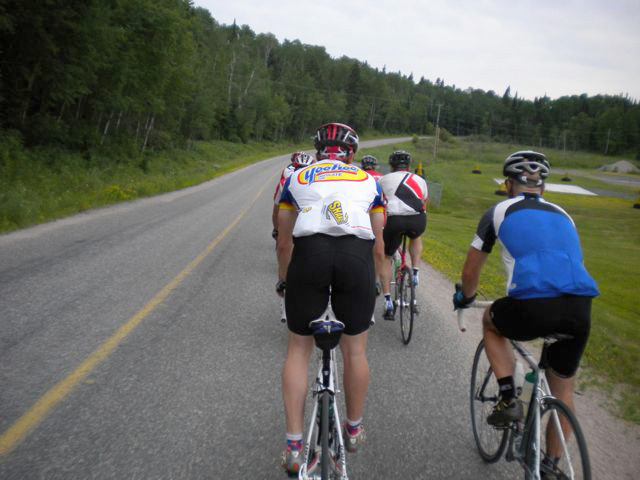 Wait a minute. That guy in blue looks familiar….

Neutral Stage – Nature Break
While boys can pee wherever and whenever they want, I needed to plan a bit more strategically. A ditch at this intersection looked like as good a place as anywhere. While I clopped my way across the highway and into the ditch in my cleats, the boys told dirty jokes. 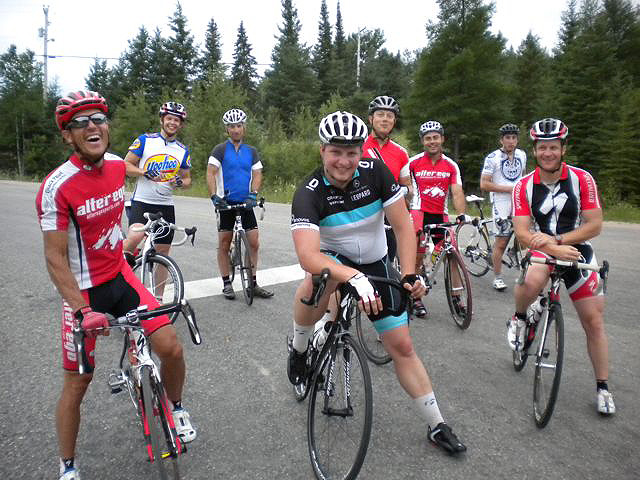 Haha very funny. I still don’t get it.

Hey, there’s that guy again. Just can’t put my finger on it…

Everyone was getting nervous about the approach to the Alpe de Keewatin. There was a tight 90 degree turn before we would hit what was described as a wall of road. The little guys looked confident. The rest of us looked less so. 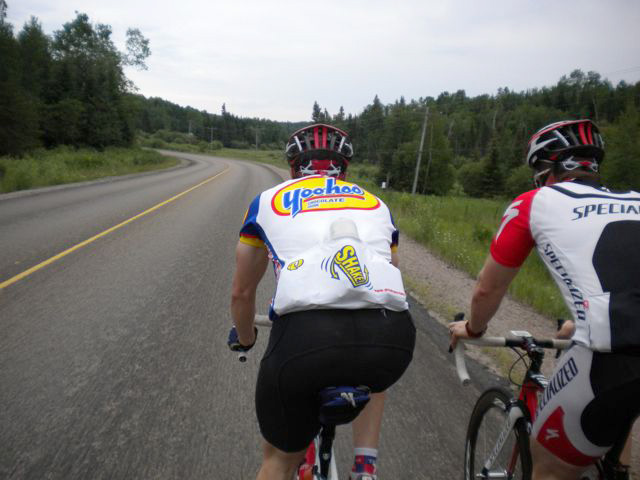 Stage 3 – Keewatin to Kenora
Having conquered the Alpe de Keewatin, we are cocky and relaxed as we roll through the rolling terrain of western Ontario, which is may not be France, but sure the hell beats Garbage Fucking Hill. 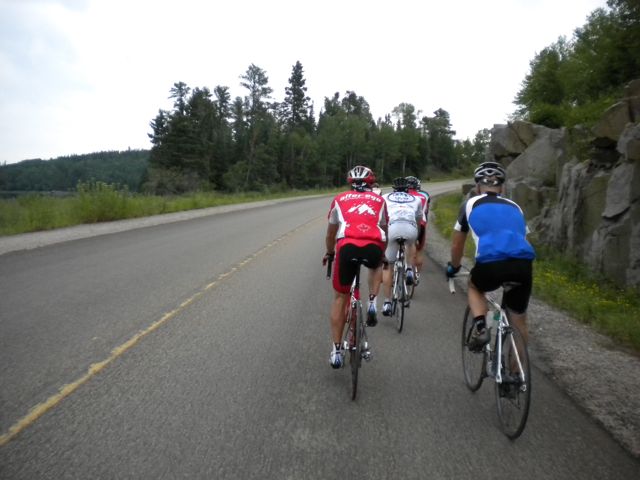 Stage 4 – Lunch in Kenora
It was agreed after much confabulation that lunch at the local pub would be preferable to riding through the approaching storm and getting struck by lightning. 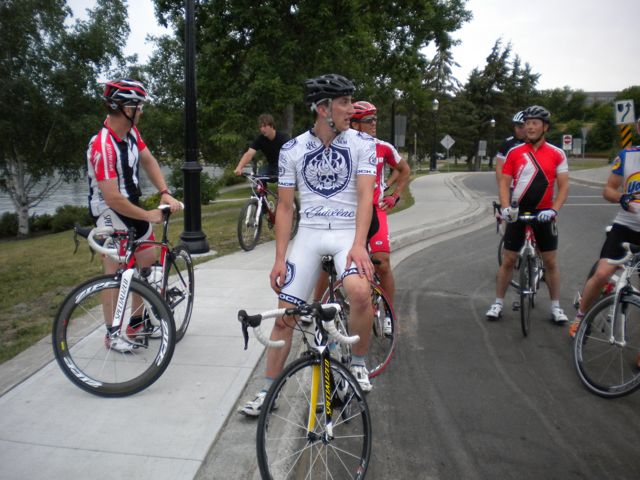 We appointed some soigneurs who had been lucky enough to procure a table on the patio under the awnings to watch our bikes, then went inside to pick something on the menu that wouldn’t be too unpleasant should it come back up again.

And then there were pitchers of beer. 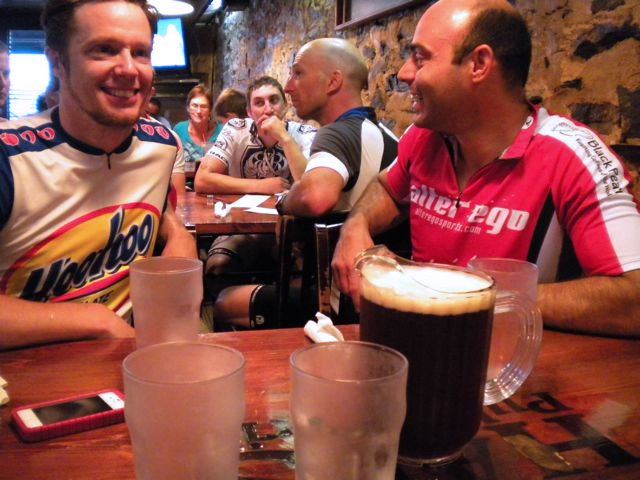 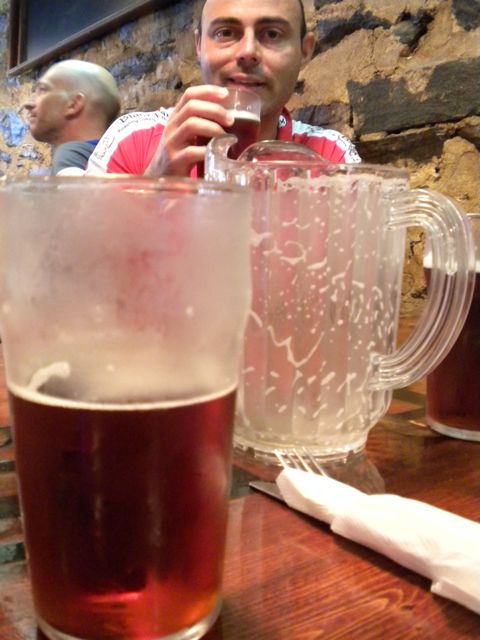 Stage 5 – Airport Road
James and Dan faked mechanicals so they could go back to their cabins, nap, and drink more beer. The rest of us soldiered on, bellies regrettably full of pub food.

Airport Road, as the name suggests, is a road that leads to the Kenora airport. And like airplanes, it goes mostly up. It is fun in the way stubbing your baby toe on the coffee table is fun. Paul Seier totally put the boots to us, earning the nickname “Paul Seier-Later”. 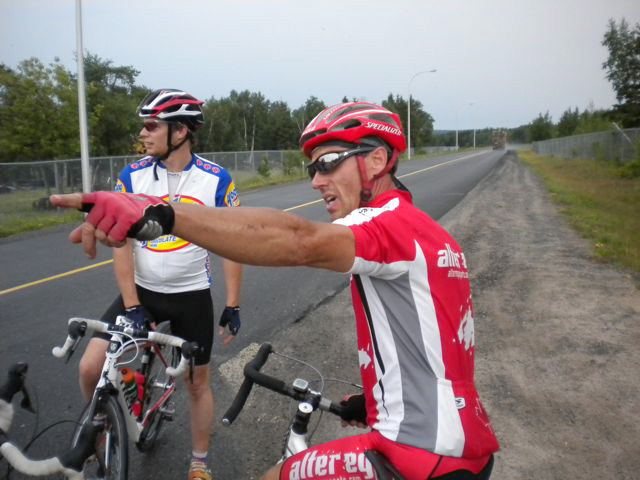 But whatever goes up, must come down, and the ride down Airport Road is worth every leg burning pedal stroke it took to get up. But first, no road ride is complete without a flat. I’m not sure, but at this point the man in blue might have mumbled something about “roadie pansies”. 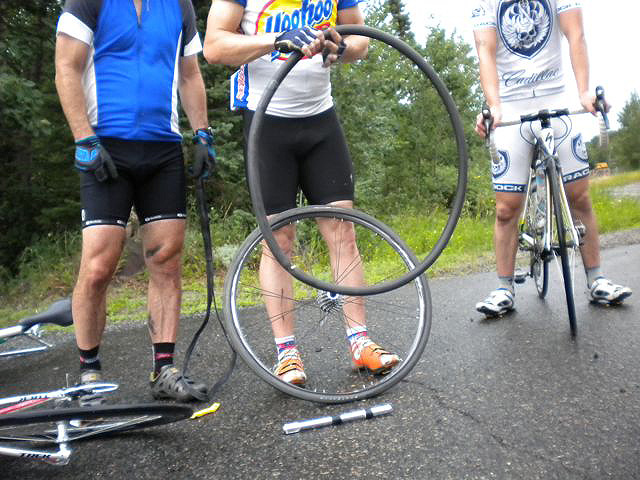 Thanks to Dave’s fast hands, we were soon rolling again. The ride back down airport road is awesome. Which is good, because the ride along the highway back to the cars is less so. As we cruised alongside enormous semis and retirement condos on wheels, we were joined by my friend Danny Morwood, who lives in Kenora and was out for his weekly Wednesday training ride. The guys were amazed by Danny’s legs, which are something between an anatomy lesson and a work of art. I have seen even the manliest of men question his sexuality in the presence of Danny’s legs.

Stage 6 – Arrivée finale
The ride to the cars was soggy and brisk. Thankfully, these are qualities I have come to both expect and enjoy. See boys, almost as dirty as your dumb joke. Which, incidentally, I still don’t get. 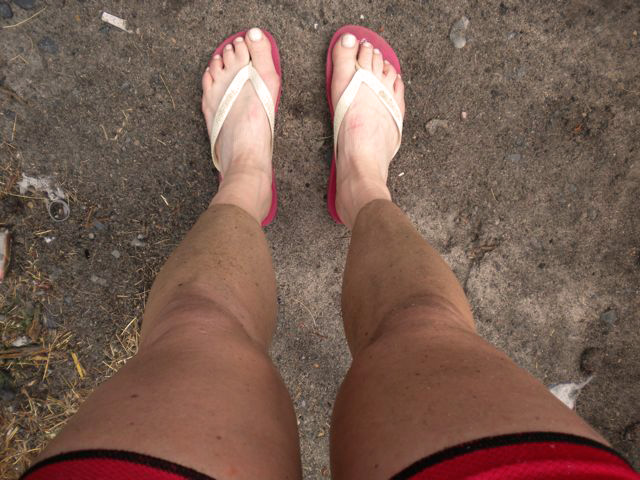 So Euro, non? Almost as Euro as this: 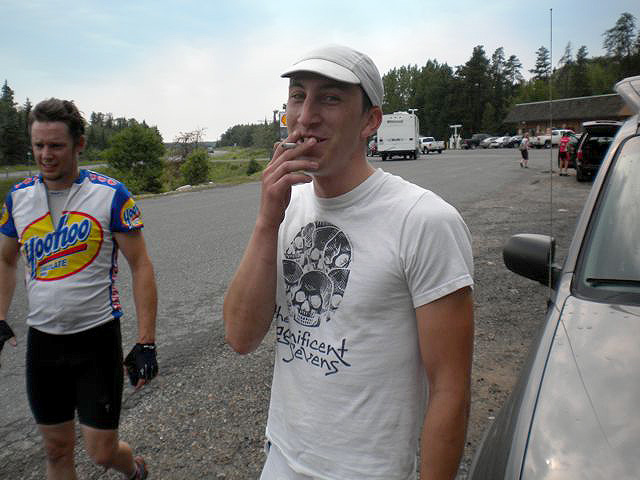 Apparently Dan was under the impression that we were in France, where it is mandatory to smoke at the end of every ride. If I was shallow and irresponsible, I might say this looks really cool.

As for the man in blue, it was none other than hard-core mountain man Kevin B., who I did not recognize in skinny tires. Kevin does a road ride every two years or so, so he says he’s good until 2014. But judging by the excitement on his face, you can tell his inner roadie is just dying to come out. 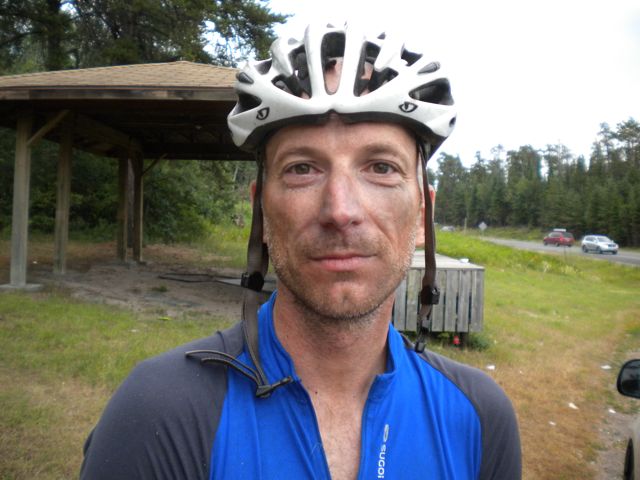 It may not have been France, but it was a pretty awesome ride with lots of hills, laughs, and even the occasional man-hug. 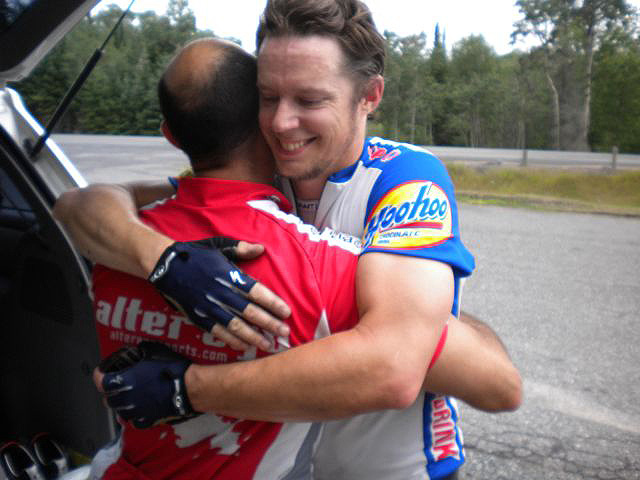 Thanks fellas. Let’s do that again. Yoo-hoo!!