The number of words the Inuit have for ‘snow’ has been hotly debated by cunning linguists for over a century. The most often sited number is 52 – some argue more, others, less. Debating aside, one need only ride a bicycle in the winter to know that the number of words to describe snow (especially when factoring the adjectives and profanities that might precede those words) is incalculable.

Every time I do Actif Epica I vow it is the last time. Perhaps it is stupidity, or merely the product of a bad memory that I somehow keep going back. Of course it is a little of both of those things, but it is also much, much, more. Of course there is the challenge of it – after all, there is no Everest in Manitoba, and truth be told, even if there was, I’d probably leave the climbing of it to someone else. Epica is a mountain in the otherwise endless expanse of the bitter Manitoba winter. Don’t get me wrong, I am not a thrill-seeker or adrenaline junkie – if I ever exit an airplane in mid-flight, you can be sure it is entirely accidental. I don’t even particularly like winter. So in the absence of any other logical reason, I do Epica because it is there. 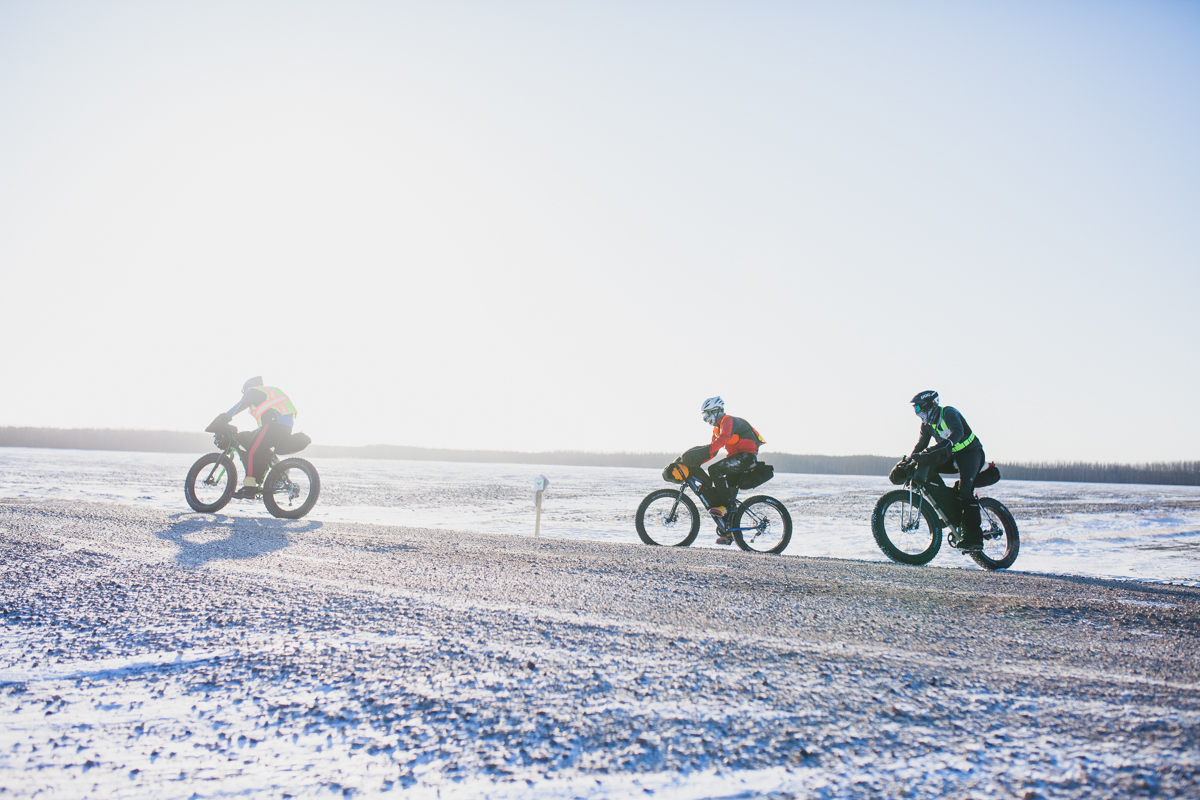 This was my third time, and each time the hardest thing has been the simple act of signing up. It’s hard because I know that once I’m signed up there’s no backing out. My pig-head won’t allow it. This year was particularly hard, because of a certain ‘incident’ last year in which another female racer accused me of cheating. Part of me (the Sean Penn part) wanted her to come so I could have it out with her in person once and for all. The other part of me (the Dakota Fanning part) wanted her to stay as far away as possible. After all, this race isn’t big enough for TWO delusional narcissists. So I decided to wait. If she didn’t sign up, I would do it.

Part One: The Night Before the Morning After
On the Friday night before the race, there is a mandatory gear check and pre-race meeting. We schlep all four hundred pounds of gear we will need to race for a final check to make sure everything is accounted for and in working order. Most of the mandatory gear is for safety – lights, reflective tape, water, maps, plus an emergency stash of 300 calories, generally in the form of a delicious pound of butter. 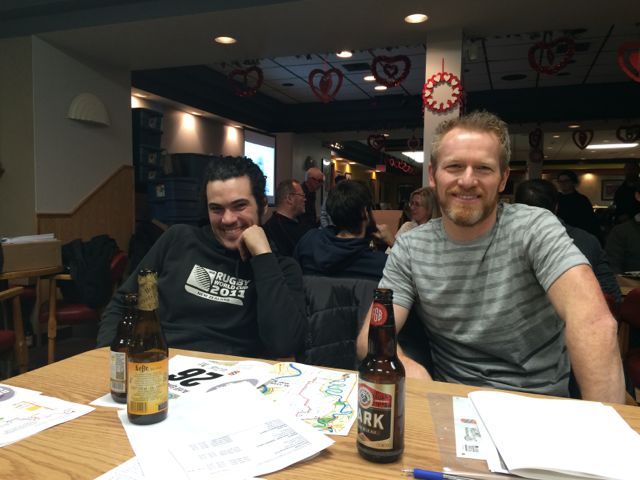 Graham the Younger (l) and Gord Mounce from Calgary sip some liquid courage at the pre-race meeting.

The meeting is also an opportunity to meet our fellow racers, and nervously wonder out loud which among us will go the distance. It was here I met Gord from Calgary – who had heard about this crazy winter race via a crappy cycling blog run by some crazy woman in Winnipeg. Gord had been happily cycling in shorts and a t-shirt back home thanks to the Chinook winds that blow in from the Canadian Rockies. The forecast for race day in Winnipeg was -30ºC with a wind chill of -40º. The forecast for the same day in Calgary was +16º. That lady blogger should be ashamed of herself.

Part Two: The Crack of Stupid
The second hardest part of Actif Epica is getting up at 4am to catch the shuttle to St. Malo, the small, French town south of Winnipeg where the race begins. Half-asleep, I slowly pull on all twenty (yes, twenty) articles of clothing I will wear throughout the day, and pack the gear I check a million (yes, a million) times before I went to bed. There is no turning back.

The shuttle is a school bus, and as it rattles along the highway I am racked with guilt for sending my children anywhere on these comfortless tanks, and wonder how many martini lunches my school taxes have funded. The back of the bus is as cold as the outside, and tosses us around so violently I want to vomit. But I am grateful for the ride, and grateful I won’t need to worry about getting my car after the race when all I want is a beer and endless hot shower. 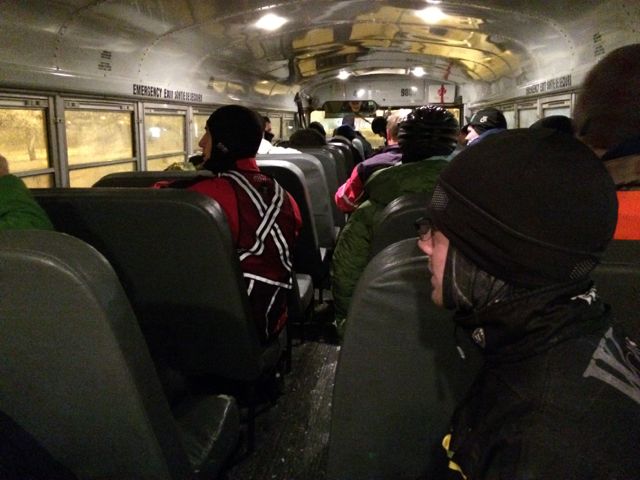 The shuttle bus to the start.

Part 3: Waiting
The waiting is awful – trying not to overheat, doubting every single gear decision you’ve made, slamming into the grim reality that the mild temperatures and south wind forecasted earlier in the week have decided to fuck off and leave you with the coldest temperatures they would allow before cancelling the race. And the added challenge of a north wind, which will be blowing in our faces for the entire day. The amount of doubt one can inflict on oneself in an unoccupied hour is staggering.

They send the runners off first. Did I mention there are people who run this thing? The runners are living proof of the relativity of badassery. Compared to running Actif Epica, biking it is a freaking spa day at the Betty Ford. 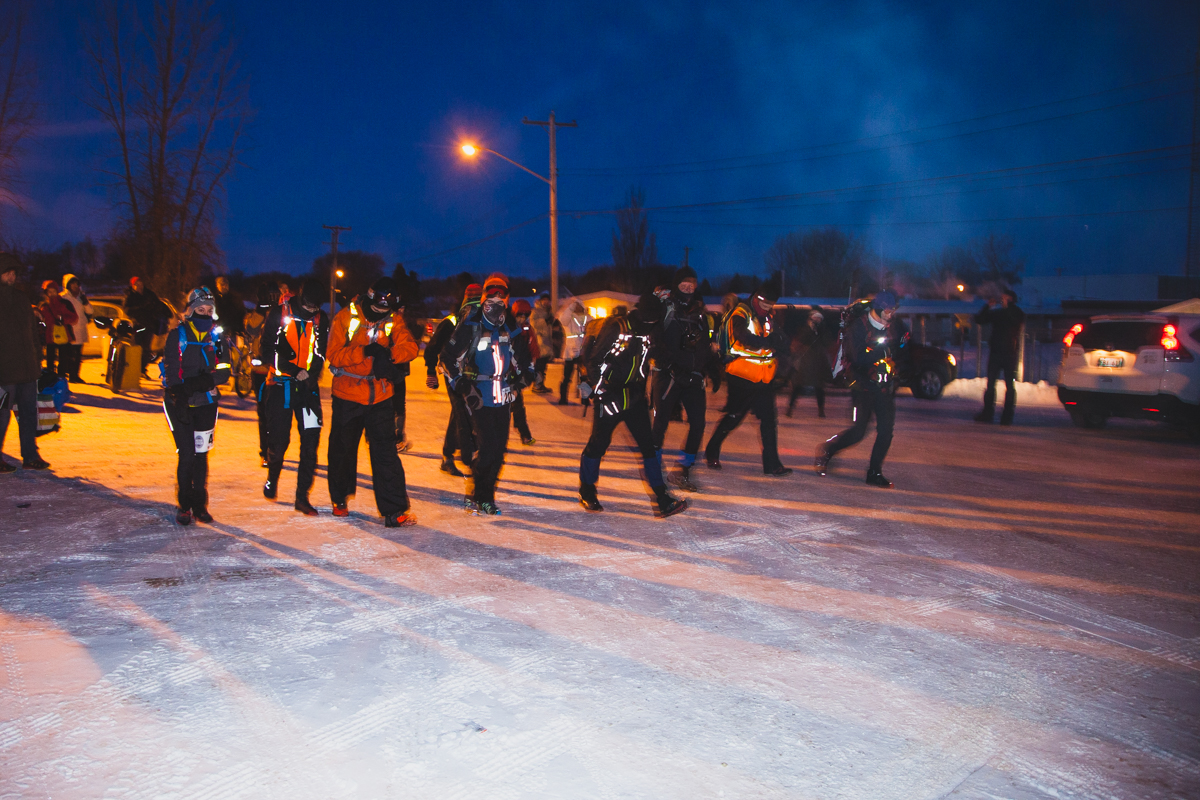 Hey you runners, leave some crazy out there for the rest of us!

Part 4: Giddy Up
Once we are rolling, everything is better. But why is everyone going so goddamn fast? Why am I going so goddamn fast? It’s going to be a long day, and being soaking wet with fried legs won’t make it feel any shorter. But ego is a funny thing – during that first leg everyone is fresh and trying to find a group to try and stay with for the rest of the day. The decision is tricky. You don’t want to be with someone too fast, or too slow – not too chatty, but not too quiet either. Not too fat, and not too lean – someone you would happily eat if things really went to shit. 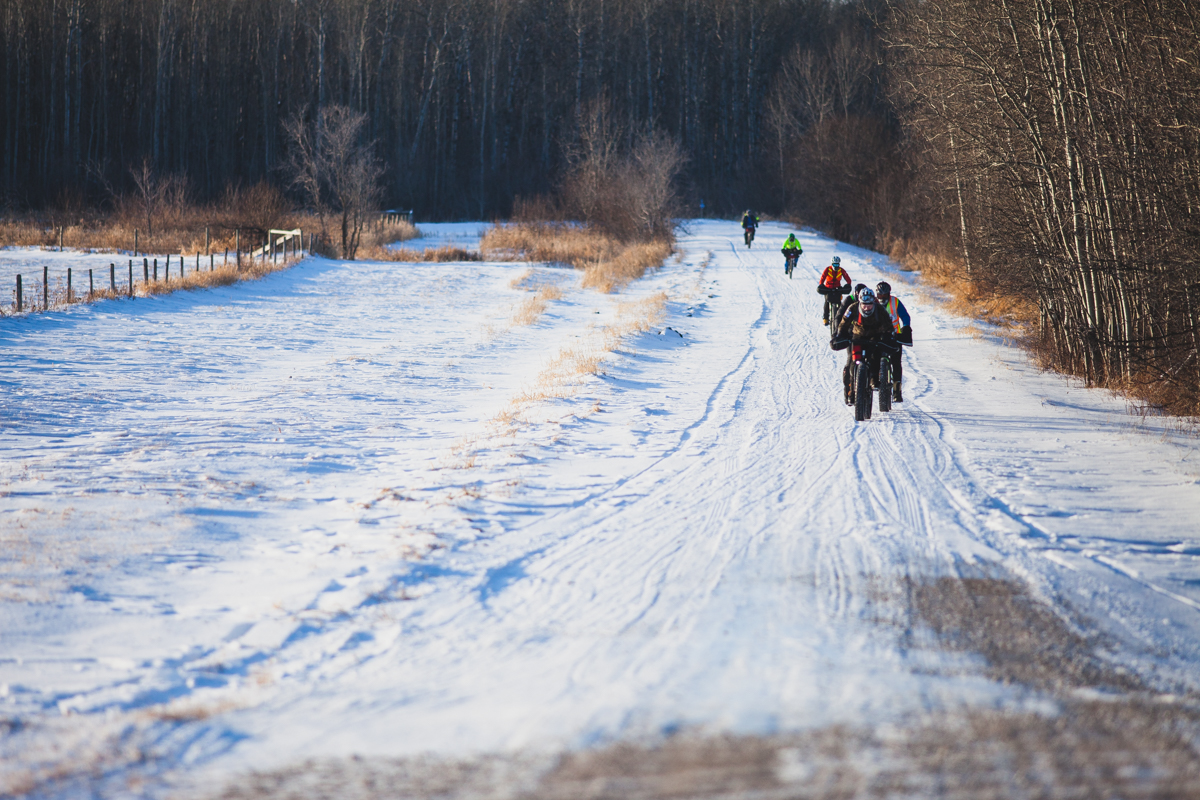 Along the way we are treated to five check stops, mostly so they can make sure we are still alive and not frozen in a snowbank or huddled inside a dead animal. These are mandatory stops – you check in, you check out, and how much time you spend in between is up to you. With chipper volunteers offering delicious snacks and indoor plumbing, there is great temptation to strip off your simultaneously soaked and frozen layers and call it a day. After all the preparation that has brought us here, nobody makes that decision lightly. 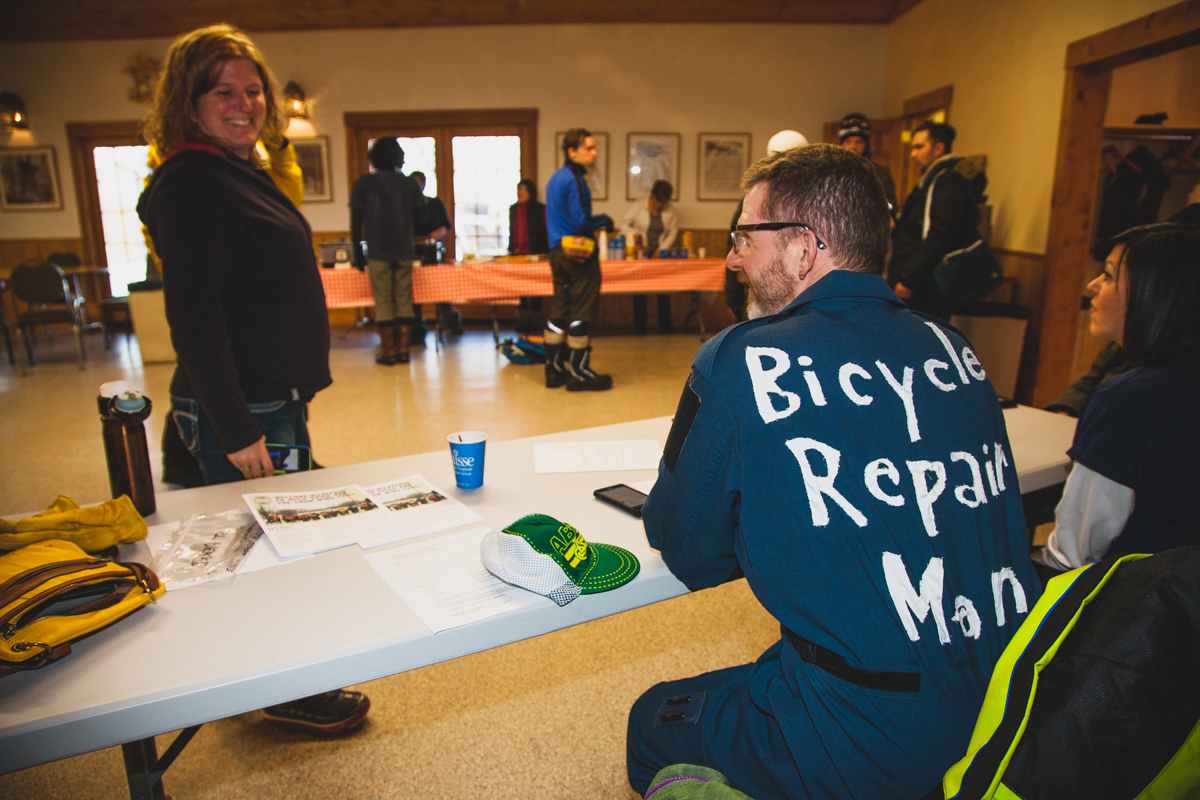 Volunteers at Check Point #1 in St. Pierre. The Bicycle Repair Man tries to convince Kim it is apple juice in the cup, but she’s not buying it. 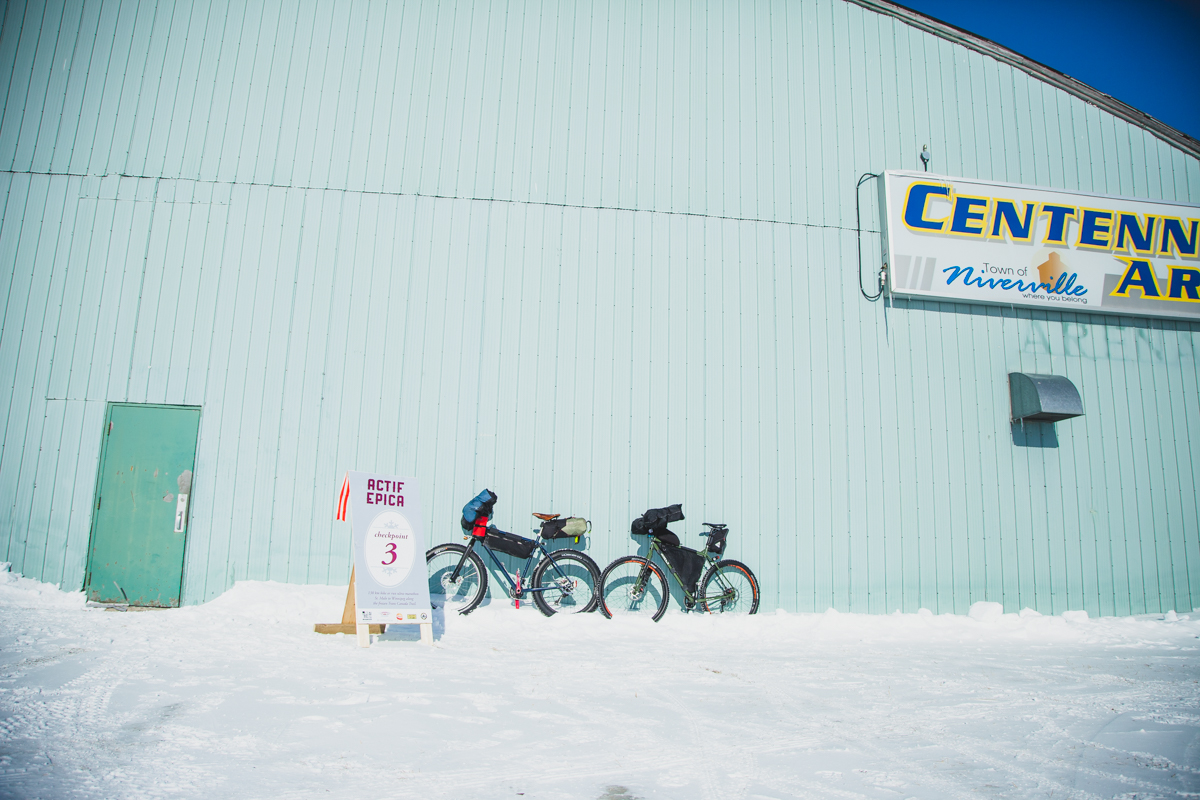 Checkpoint #3 at Niverville. I offer my eternal love, devotion, and servitude to volunteers in return for a plate of perogies.

I’ve been riding in a group of about five riders, including my friends Graham Madden and Ben Ryan – who are bike couriers from Natural Cycle. Both are great riders and awesome dudes. I was not counting on riding with them, but am happy they are there. When we get to the checkpoint, they decide to let the group go and dial things back a bit. Considering we were the majority of the group, and the other two guys were really pushing the pace, I decide to invite myself along. They are both young, lean, and would probably make for pretty good eating. 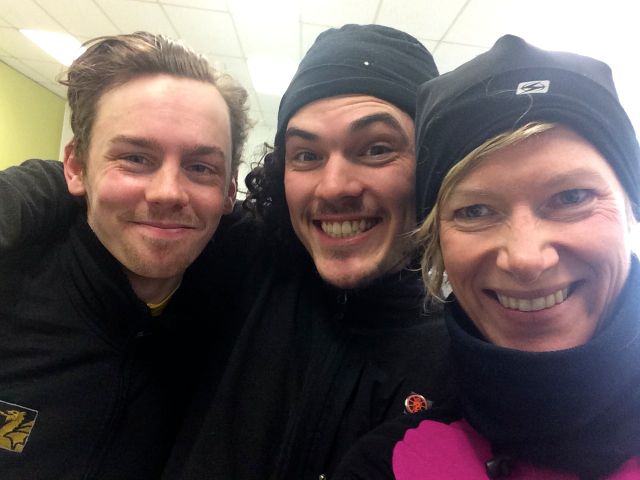 Ben, Graham and me. Still alive and smiling.

See? Couldn’t you just eat them up?

That said, even living, they make excellent riding companions. Energetic and positive, they make sure I never take the task at hand too seriously. We are there to enjoy a great day outside on our bikes. Sure it will be hard, but that’s ok. It will also be epic and awesome and something we can bore our friends with over beers for months. 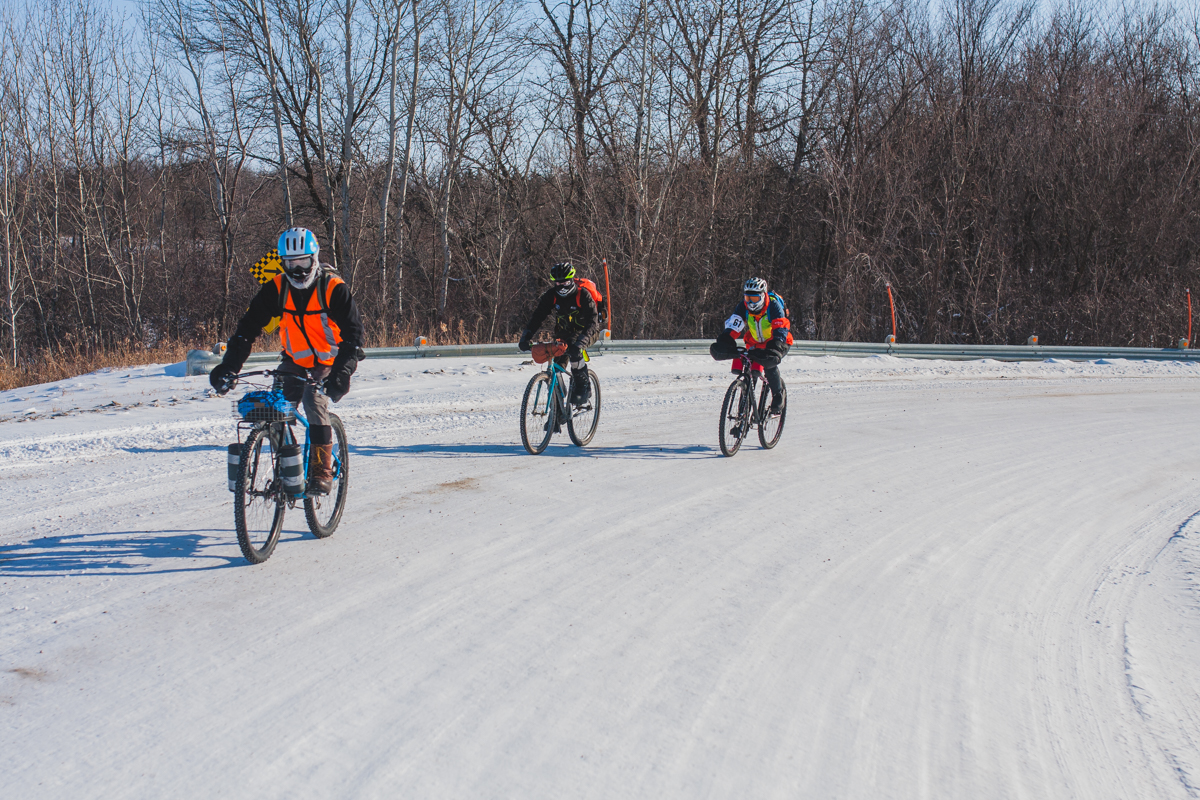 At checkpoint #3 in Niverville we hook up with our Calgarian friend Gord, who has managed to get himself lost in a place so flat you can watch you dog run away for three days. To be fair, the complete lack of elevation also makes things look exactly the same in all directions. His GPS is not working properly and he asks to join us. As we roll out, I come to the terrifying realization that since I have done this race twice before, they actually think I know where I’m going. Somehow, these poor souls have no knowledge of my legendary navigational ineptitude. We are so fucked. 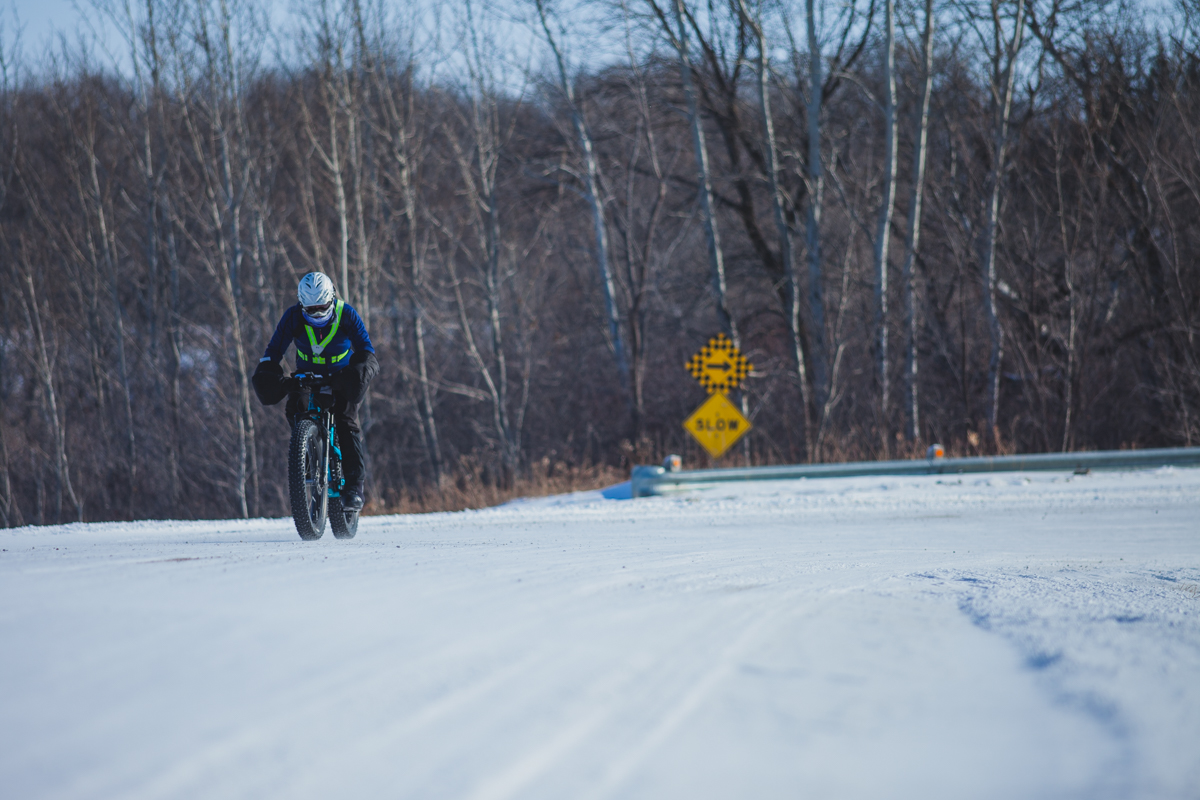 By the time we reach the floodway, we have travelled over one hundred kilometres, and miraculously barely been lost. At 30 kilometres long, this has ben the longest and hardest stretch. The fart jokes that were funny five hours ago are now hilarious. Graham points out the domed football stadium on the horizon in an effort to cheer us up. An hour later the stadium is no closer. We are exhausted.

Major Tom meets us after we clear the floodway with celebratory libations which raises our spirits and give us a much-needed lift. One of the hardest parts is yet to come – the dreaded trudge through Maple Grove Park. My verbal profanity during this section is a thing of legends. We drag our bikes through deep, soft snow for an eternity as the sun sinks lower into the trees. This horrible, endless portage is punctuated by a climb up a near-vertical ascent to a bridge who’s sidewalk has not been cleared since the dawn of time. As we reach the top of the bridge, Graham lets fly a string of profanities so sublimely obscene, blasphemous and vulgar, I am completely awestruck. Chapeau, sir. Chapeau.

Once we hit the last checkpoint at the University, we know we are home-free. My hands are frozen, but I have a spare pair of down-filled mitts which are so pouffy I can’t shift or brake, but I don’t care. I have just stuffed an entire pastry in my mouth that is better than any sex I have ever, or will ever have in my entire life. As we start our trip down the river trail to the finish at The Forks, we meet, by coincidence, our friend The Hipster. His chipper and slightly inebriated presence is a welcome sight. It’s dark by now, and as the river snakes along, it’s hard to see how far we have to go. He assures us we are close.

And then, finally, we are done. It’s almost 7pm, and it’s taken us just under eleven hours to get here. It certainly hasn’t been easy, but what would be the fun in that? If it was easy, why bother? People are already asking me about next year, which is hard to think about so soon after finishing – days later my legs still complain when I climb the stairs and my race clothes sit in a neglected heap where I left them before falling into my post race-death sleep. Of course I say no, I will not do it next year. Never again. Not unless, of course, it is there.

Photos (the good ones) are courtesy of the very talented Tristan Fast. Thanks Tristan!

Thank you to JP for lending me your awesome Niner with pink cables. The “Keep Peddling Dammit” decal on the top tube was good motivation during dark times. Thanks to Dallas for the pogies, which probably saved both my race and my fingers. My undying gratitude to the volunteers, and Hal, Dwayne and David for your patience and running such a classy and well organized event. Hugs to Twila and Coach Rick for keeping me on track and off the coach. And finally, Graham, Ben and Gord, you guys are the best. I’ll ride all day across the frozen prairie into the wind with y’all anytime. But no pizza for you, Graham.