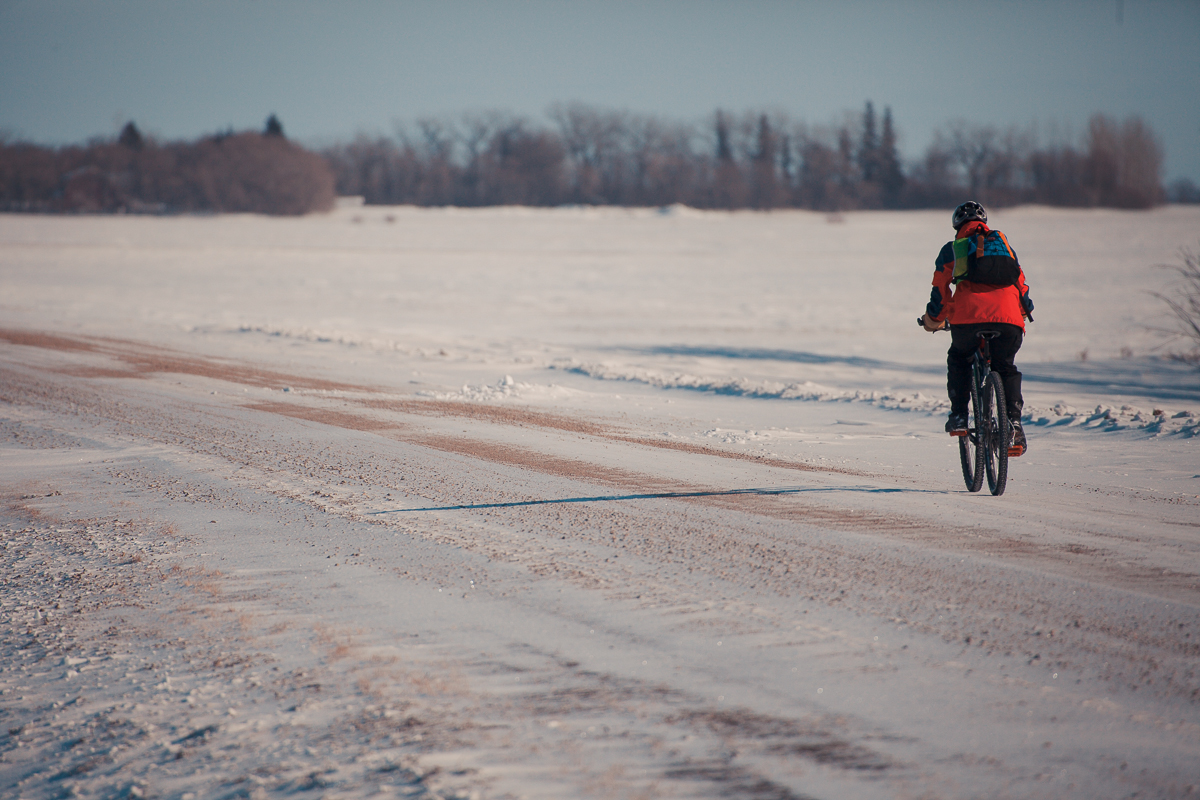 I was not feeling confident going into Actif Epica this year. I was plagued with equipment problems, and then there was the added factor of this being the harshest winter we have experienced in these parts since the Depression. But I am not the sort to allow silly little things like that stand in my way. Two weeks before the event, I decided I would participate no matter what. No excuses.

So yeah, the race was hard. Much of the course was unrideable due to the ungodly amount of snow we’ve had this year, and a strong and bitter north wind made some of the riding sections very slow going indeed. But if you live in Manitoba, this is nothing new. I finished the 130 kilometre race in 11 hours and 55 minutes. Of the 77 people who registered, twenty did not start. Of the 57 runners and cyclists that started, 16 did not finish. Of the ones that did finish, I came in seventh. And first woman. The women’s field was small, as usual, but an experienced female racer had come from out-of-town, making for an exciting and challenging race for me. We both worked very hard, and I was impressed by her talent, toughness and ability.

The day after the race, as I lay flat on my back wondering what model of truck had hit me, I surfed Facebook for photos of the race that other people had posted. I saw a link to images the visiting female racer had posted and happily flipped through them, interested in seeing her view of the race.

In her photo gallery, I found a picture of me riding with fellow racers Pete and Paul, who I had met up with somewhere before the third checkpoint in Niverville. Under the photo was this caption:
“leader – cheater on the wheel all (the) way.”

I was stunned. Cheater? How could she say that? Riding in groups is not illegal in this race. It is a draft legal race. Riding together is not only allowed, but encouraged in the race bible. Almost every other racer rode with others during the course of the race, why single me out? And how could she say I was on someone’s wheel the whole time when I spent almost half the race completely on my own? During much of the time I was with others, we weren’t even riding. I’m no scientist, but there did not seem to be any aerodynamic advantage to being in a group while dragging our bikes through 3 feet of snow. As for those sections when I did work with others to battle the North wind, we worked together, taking equal turns on the front.

I felt sick to my stomach. Here was a well-known racer publicly calling me out for cheating – in front of my friends, the race organizers, strangers, and other members of the cycling community. Her accusations affected not only my reputation, but the reputation of every other racer in the field, not to mention the very race itself.

I notified the race organizers and they assured me that my standing is officially secure, legitimate and well warranted, both technically and morally. They contacted her explaining their perspective, reaffirming the results, the rules and the spirit of our event. They asked her to reconsider her choice of language, but the photo is still there, along with the caption.

I am pleased this was taken seriously and dealt with promptly, but I would be lying if I said this hasn’t seriously affected how I feel about the race, which is perhaps the greatest injustice of all. Perhaps even worse is how it makes me feel about being a woman racer. Is this how we encourage each other? Is this how we make our few fellow racers feel welcome and bring new women into the sport?

I’ve tried to brush this off and come up with a positive spin on it, but I’m afraid I’m coming up short. Maybe you can help. Try to understand that women are still relatively new to this table, and still finding our way. In spite of being competitive, hard, and fiercely motivated, we can be easily swayed. Small gestures of encouragement can go a long way to make us feel welcome, just as a thoughtless and vindictive accusation can turn us away.

This was not the post I had hoped to write. I tried to write a positive one that talked about my experiences throughout the race, and it was way more funny and nice. It talked about what a great race this was, and how proud I was to be part of it. It also talked about the incredible volunteers that helped make it happen, and the amazing job that was done by the organizers. All of that is still absolutely true in spite of this crappy ending. Thank you to those people who worked so hard to make Actif Epica the wonderful success it was.

← In Your Face, Winter
Day 8: The Forbidden City →