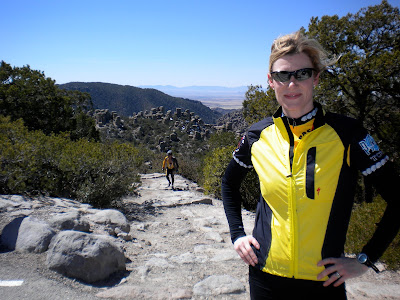 I have wondered why people around here are so religious. Everywhere you look there are crosses, churches, crucifixes and monasteries. Today we even passed a monastery/trailer park. Odd combination. Anyway, during the first 19 miles of riding into what felt like 80 km headwinds on a brutally long and straight incline, I think I figured it out. Pedaling mostly with one leg, grinding out that 19 miles, I prayed to God. In fact, I prayed to anyone who would listen. I prayed to Saint Ben to block the wind. I prayed to Saint Coach Troy for strength. And I prayed to Saint Chris Charmichael for proper pedal mechanics. I’m not sure if any of them heard me, but when we finally reached the first rest stop I thanked them all. We had rolled out late, and given the not-so blistering pace, Lon told us we would likely not make the cut- off time to climb the monument (basically a mountain). So came the agonizing decision of what to do. My knee was still killing me, so it was either hitch a ride to the base of the monument, and do the climb, or ride the 14 miles to the base and turn around back to Willcox. I chose the former, and the decision killed me. Getting into the van, with my bike in the back was so depressing I felt like crying, but in the end listening to my head, rather than my heart was absolutely the best thing to do. 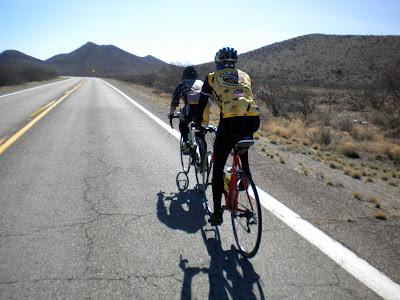 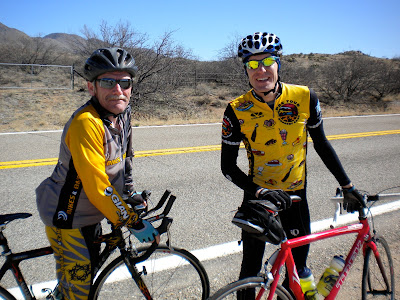 I unhappily rode the van to the second check stop 14 miles away and sulked in the van with warm day-old coffee, kindly offered by Susan. Oddly the coffee was way better than the shitty hotel coffee, and deeply appreciated. I had some snacks and rested the leg for a while, until it was time to head up the monument. There was a 3 mile ride to the base, followed by an 8 mile climb. After 3 miles, I honestly wasn’t sure if I could do it. But in the end, stubborn stupidity prevailed and Michelle and I headed to the top. It was a brutal climb, so steep I ran out of gears and just had to muscle my way through. I sweat and swore and pedaled for all I was worth. Stopping would have certainly rolled me and my bike right back to the bottom. But after what seemed like an eternity, we finally reached the summit and it was worth ever minute. The view was spectacular, but the feeling of accomplishment was even better. I’m sure I wouldn’t have made it if Michelle hadn’t been there with me. We chatted and joked on the way up, when breath permitted. And maybe swore a bit. 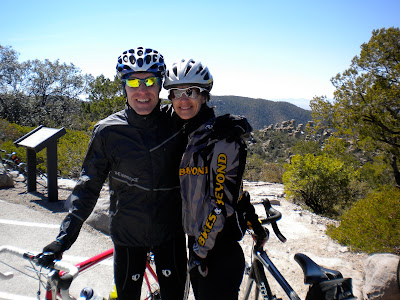 I figured the way down would be fun, and it did not disappoint. I flew down that mountain at over 40 miles per hour, working the winding road for all it was worth. What had taken over an hour to climb took less than 15 minutes to descend. Including 2 stops to take pictures.

Once past the base of the mountain, the fun did not stop, with a gradual downhill and still tailwind. Flew into the lunch stop grinning like a crazy person. Lunch was fantastic to boot, with grilled cheese and tomato sandwiches, fruit salad and chips. YUM!! Have to mention the food at this point. These folks do a fantastic job of providing support for us. They set up trailers, benched, bike racks and an assortment of food and drink for us 4 times a day. Usually 2 morning rest stops, lunch and a mid afternoon stop. But god help you if you don’t wash your hands before sticking them in the chip bags, or if you pee to close to the food van. This years’ jerseys are pretty funny. Playing off the fact this is Desert Camp, the jerseys say “Dessert Camp” and feature fictional local deserts like the “Tombstone Tart” (not my new nickname, Princess Andrea still seems to be sticking, which suits me fine). 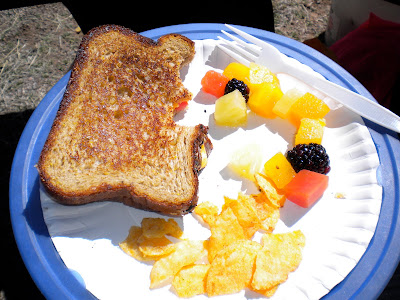 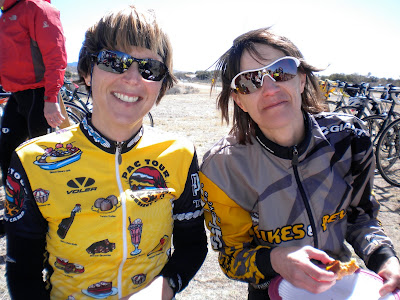 After lunch, Michelle and I left Ben and Scott peeing by the side of the road (a safe distance from the food van) and took off down the road. A great downhill, reward for the awful uphill on the way there. The downhill turned to rolling hills and a side wind, but still the boys caught up at the next rest stop. The next stretch was back to Willcox and Ben and I rode like hell. It was mostly downhill and a bit of a tailwind made for a very, very fast and fun ride back to the hotel. So fantastic!!!!

Such a mixed bag of a day, with every type of riding imaginable. Slow, gradual uphill grinds to screaming downhills and everything in between. Awful, painful moments contrasted with laugh-out-loud fun. What a day. 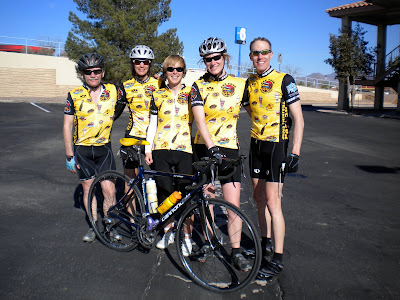 Another post-ride trip to Starbucks then dinner with our new friends Didier and Taya at a neighboring hotel with a half descent restaurant. Ended the day with a nice leg (and knee) massage, which will hopefully help again for tomorrows’ ride back to Tucson. Should be a good one, not much climbing (1,800 feet), and about 80 miles of riding.

Well, Ben is asleep and we have an early day tomorrow, complete with packing up and moving again. Yee haw!