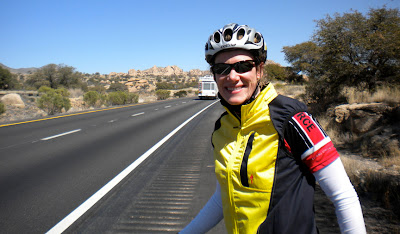 Ho man, what a day. We started chipper and fresh despite the long ride yesterday. We walked into Tombstone for a Walton-style breakfast with a tablefull of Tour riders, complete with pancakes, sausage, eggs, and of course, shitty coffee. Lots of great stories to share from the day before. 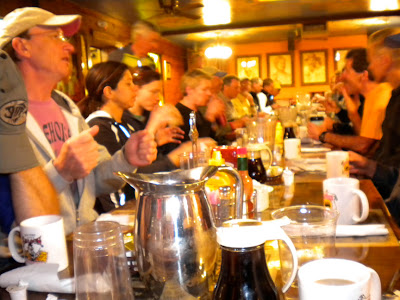 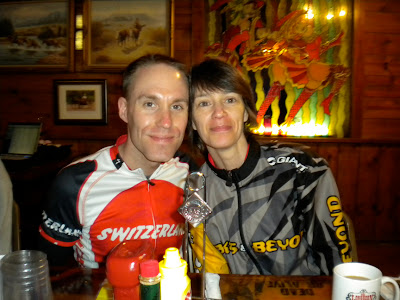 Today we were riding 10 less miles and climbing only half the elevation, and had even planned on riding some more if we got into Willcox too early. Piece of cake. We hadn’t counted on the ferocious winds we faced all day. Mostly headwind, sometimes cross wind that almost knocked us over. Scott almost got taken down by a tumbleweed on a particularly nasty and open stretch of road. 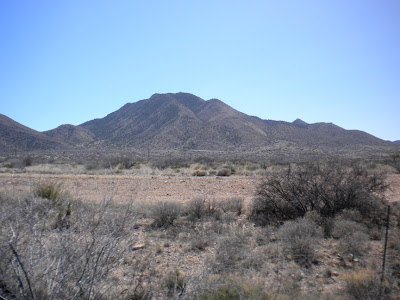 As for the hills, we had a one mile stretch of 6% incline that almost killed me. Ran out of gears and had to mash it out to the top. No recovery on the way down either, because the wind made the downhills feel like uphills. Seriously. We would be going down a hill, pedaling, at 10 km/h. Although we were only climbing 1,700 feet, it seemed like we would be doing it all at once. Not many photos from today, too hard to shoot and ride at the same time, and too much of a grind to stop much. 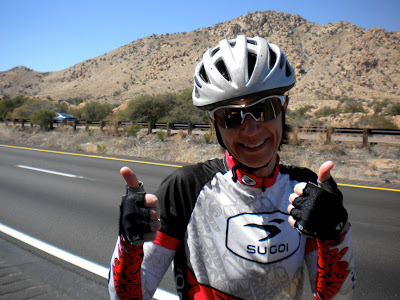 Started having some severe pain in my left knee just before lunch, which continued to plague me for the rest of the day. Certainly concerned, considering we ride 90 miles tomorrow. Michelle was having pain in her right knee, so between the two of us we had a good set of legs, as well as a bad one. Thankfully we had Ben and Scott to pull us the last 15 miles, otherwise we might still be at the side of the highway somewhere. But after 3 days of terrible coffee we were motivated by the Starbucks we knew was waiting for us in Willcox. As soon as we got in Scott made some adjustments to my saddle position, since we figure that might be the source of the knee issues. It’s amazing how the smallest problem with your position can really mess you up, especially with prolonged riding. 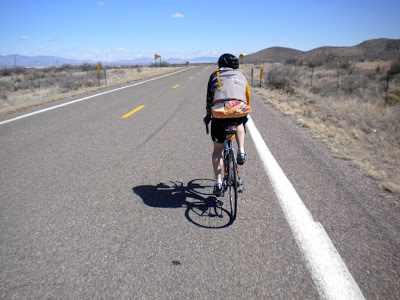 Coming into Wilcox we showered and headed straight to Starbucks for the first descent coffee of the trip. We were like kids in the candy store. So exciting. First drink to come to mind was a Grande Triple Mocha Vodka Valium Latte. Here is Michelle about to order one… 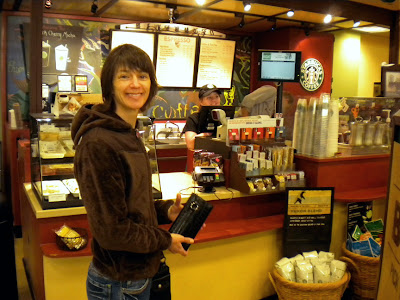 After Starbucks, we picked up some beer at Safeway (weird) and headed back to the room for pre-dinner cocktails. Dinner was at a Mexican restaurant across the street, Didier and Thea (sp?) the couple from Europe via. California joined us. Ben and I drank massive Margaritas, or “recovaritas”. Worked for us. 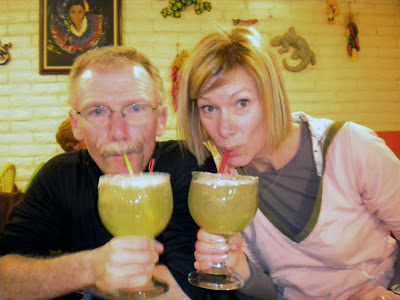 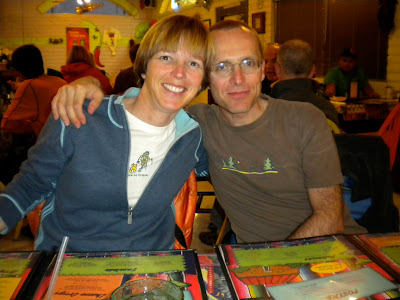 Onward to another day. 90 miles and 4,360 feet of climbing. Providing the Advil wins out over the knee pain. yee haw.