Prologue:
My recent trip to California to ride for a week was perfect in every sense but the fact that my day (and often night) job refused to be ignored. As a result, the evenings I normally would have spent in the drawing room with my smoking jacket and pipe crafting verbose accounts of my day’s adventures was otherwise occupied with the banalities of work. And so although these posts will come out over the next week or so, and after the fact, writing them now may provide a much-needed distraction from the scene I came home to:

And so we begin at the beginning.

Although it is a necessary evil, travelling with a bike box is an inconvenience made sweeter by one thing. When questioned by puzzled strangers as to the contents of the box, I tell them it’s a dead body. The look on their faces makes the trouble all worthwhile. Try it. It’s fun.

We arrived in Los Angeles in the afternoon, attending to the first order of business: a visit to one of the local bike shops I had stalked and targeted as a must-see. Bike Effect in Santa Monica had been recommended by my friend Danny back home, who is both very particular and possessing of impeccable taste – refinements that are in stark contrast to the merciless shit-kickings he doles out to anyone foolish enough to try to keep up with him on a bike. 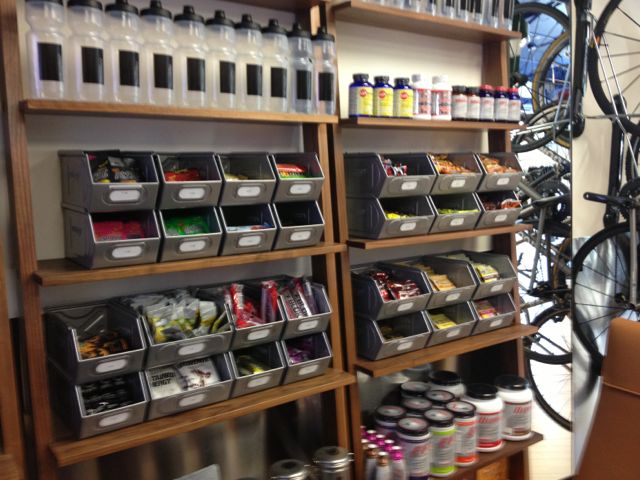 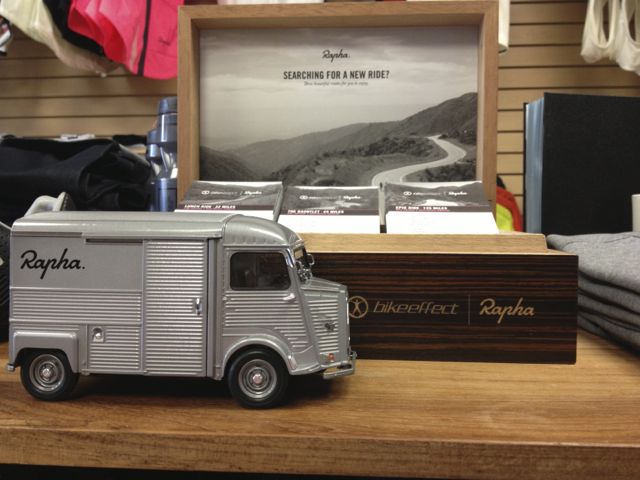 The shop is impossibly clean and organized – and not just “for a bike shop”. It exudes the style of a high-end fashion boutique that has been meticulously merchandised and filled with only the best of everything. Walking in, we were greeted by Justin, who was friendly, and looked like he would be quite at home in a Tommy Hilfiger ad.

Within a minute of our arrival I had an espresso in one hand (served in Rapha dishes no less), and the latest issues of Paved in the other. My inner princess was happier than a tornado in a trailer park. I had reached roadie Nirvava. 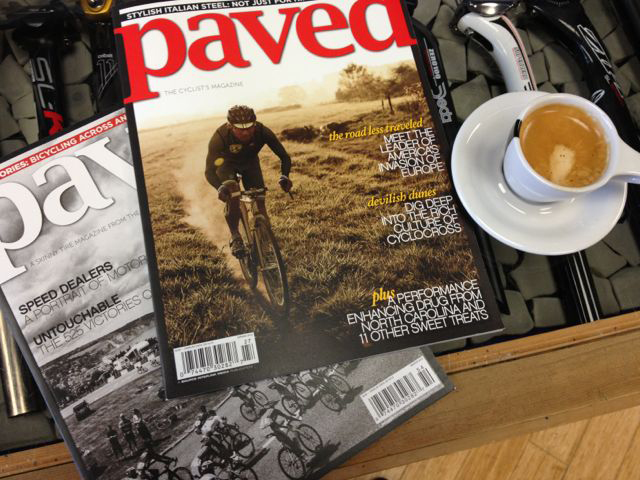 The bikes they carry are not for the faint of heart or skimpy of wallet. I was pleased to finally see some Ritte Van Vlaanderen bikes in person. I’ve been a fan of the Ritte brand ever since visiting their fun and witty site and blog, which were a refreshing change from the typically oily and pretentious vibe that seems to surround anything to do with road biking. Based right here in Santa Barbara, their bikes are pretty hot too, and not nearly as expensive as they look. 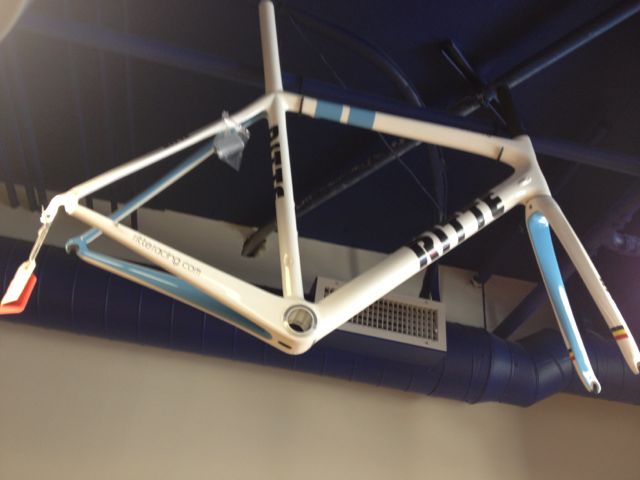 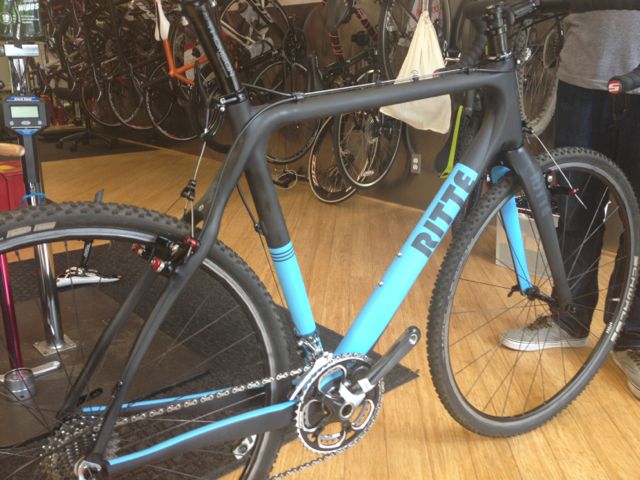 Yummy. I would happily ride the crap out of their carbon cross bike, aptly named Crossberg.

Even the shop area (a place we girls should approach carefully so as not to startle the often shy and nervous wrenches) was inviting. I chit-chatted with a not-so-shy mechanic, who happily equipped and schooled me for a roadside chain repair after I mentioned I was a bit unsure about the strength of a recent and hasty adjustment. I think I did an admirable job of pretending to understand what he was saying, knowing full well that if my chain broke in tomorrow’s century I’d be far more likely to use my cell phone than my chain tool.

We had the pleasure of meeting none other than Steve Carre, bike fitter extraordinaire and overall very nice dude. Speaking to people who know about such things, Steve is pretty much the Jimmy Hendrix of bike fitters. Sadly, my bike was in pieces in the back of the car, next to the dead body.

Bike Effect is owned by Alison Letson, a woman as stylish and impeccable as the shop. Dressed in heels and an envy-inducing dress, she breezed into the shop and offered us another espresso with a warm and ernest smile. Soon we were chatting away like old friends over a bottle of pinot grigio under the watchful eye of Toast the dog. (Ok, there was no wine, but a girl can dream). 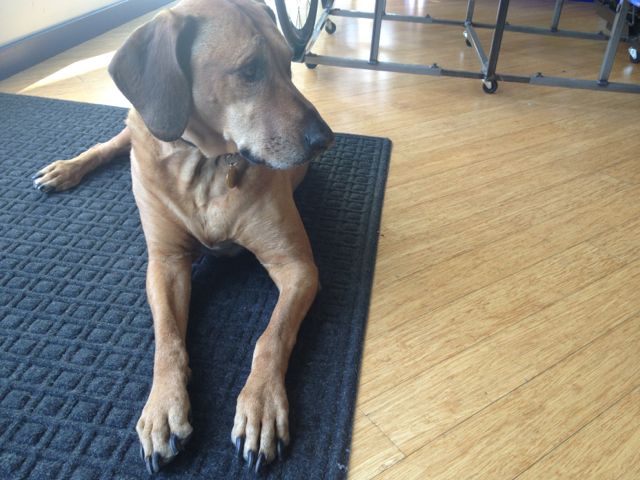 I’m not sure if it’s possible to spend too much time or money at a bike shop, but if so, I’m pretty sure I did. Among other bits and pieces, I picked up this sweet kit created and manufactured right here is Los Angeles by Endo Customs.

Endo is currently not taking custom orders from just anybody, but I am hoping with some good old-fashioned Winnipeg charm they will come around. If that doesn’t work, I am not above throwing myself at them.

As far as ladies shorts go, I don’t think I’ve found ones with a more comfortable or flattering fit. The waistband is more yoga-pant than cycling short, and the wide elastic at the leg means less of a sausage leg effect than your basic short. The chamois is also wider to account for the typically wider measurement of a woman’s sit bones. Even if you have a proper fitting saddle, the wrong chamois can make the whole thing go straight to hell in a hand basket.

(That’s not me by the way. My fingernails aren’t that nice.)

I generally prefer bibs but was in need of regular shorts for longer rides, where nature breaks often happen in places where speed and discretion are imperative, if elusive goals. These shorts would be perfect for both my modesty and my delicate lady parts during the hundred long and likely painful miles I was going to ride the next day, and long days of riding ahead.

In spite of the super high-end merchandise and obvious road pedigree, the vibe at Bike Effect was as warm and welcoming as any shop I’ve been to. Much more so, in fact, than many others. We were encouraged to look around, engaged in conversation, and schooled about their products and fitting techniques without any annoying sales-y pressure. And we never felt like we were taking them away from something more important.

As fun as shopping was, eventually it was time to take our leave and drive to Solvang to register for the big ride. On everyone’s advice, we drove along the Pacific Coast Highway, which offers a view vastly different than any you’ll find in Manitoba this (or any) time of year.

We arrived in Solvang after dark and met up with our friend Philip, an ex-Winnipegger now transplanted in Santa Cruz. With over four thousand people registered for the event, the line to sign in and get our event numbers was easily a half-mile long.

Thankfully it moved quickly and soon we were sitting in a cozy Italian restaurant over modest amounts of wine and obscene amounts of pasta. It would be after 10pm by the time we got back to the hotel, and the bikes were still in pieces. With a wakeup time of 5am tomorrow, this could be ugly.

Ready or not, tomorrow the riding begins.