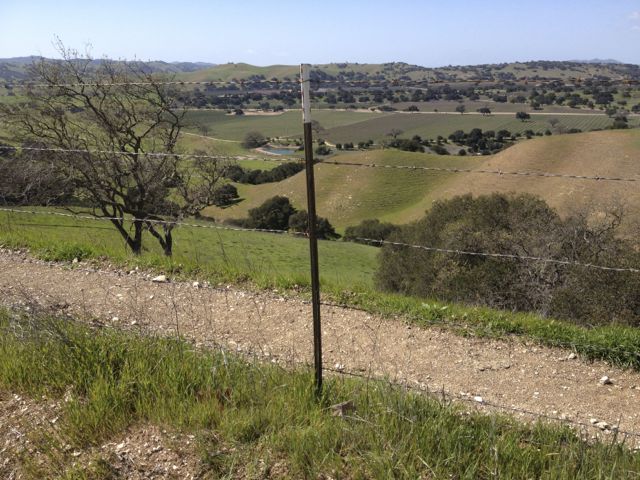 Starting off the spring riding season with a one hundred mile ride might be considered imprudent by some. But when that one hundred miles happens to be through the beautiful Santa Ynez valley in Southern California, prudence is probably something to be ignored. Which is easy if you don’t have an ounce of prudence anyway.

Ben and I had arranged to hook up with Philip, who had come to ride with our morning road group last summer while he was in Winnipeg visiting family. He’s a super friendly and positive guy, full of enthusiasm and warmth. He is also about a foot taller than Ben, and as strong as an ox. He would tell us later that his riding buddies back in Santa Cruz call him JJ, short for Jumbo Jet. 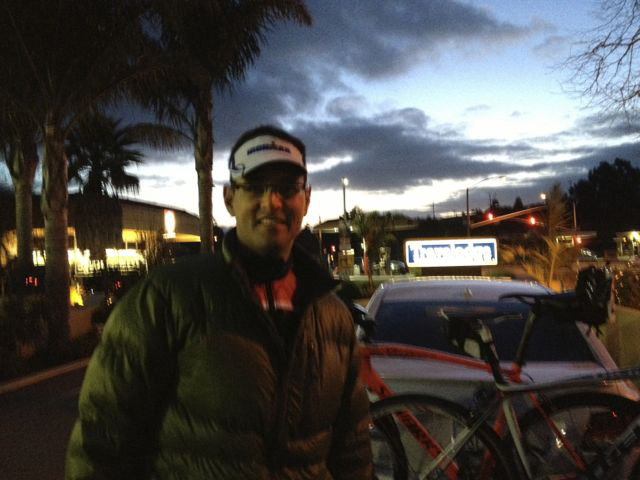 Why is it that no matter what time a sporting event starts, you have to wake up at 5am? To make matters worse, my dismally short sleep was disrupted by intermittent panic attacks about everything from missing sunglasses to food poisoning. By the time morning came, my gear was tagged, laid out, and catalogued like an exhibit in the Smithsonian.

In spite of the hoards of people in the mile-long registration line the night before, the startline was oddly deserted. Being a charity “ride” rather than a charity “race”, the organizers had given an hour and a half window for people to start. Pfft. How the hell are you supposed to know who wins if you don’t all start at the same time? Ridiculous. 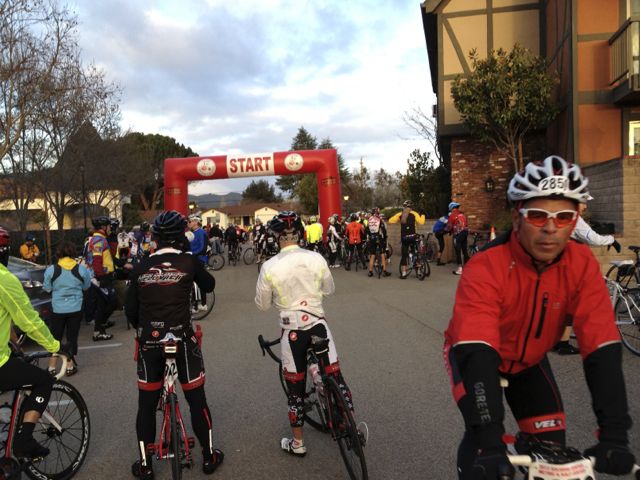 Even with the sparse crowd, there was easily a gajillion dollars worth of bikes there, and enough middle-aged white guys to fill parliament twice.

The three of us had planned to start easy. It’s early in the season to ride a century, and overdoing it could mean a very miserable week of watching daytime TV with anti-inflammatories and ice packs. Philip’s assertion that we were going to “Kill It” was motivating, but somewhat worrisome.

We started with a fair-sized group of about 20 riders, and the pace was light to moderate. It was easy to stay in the pack and have pleasant conversation with the riders around us. As we warmed up, the three of us moved to the front of the pack and started to ride away with those who were feeling like riding a bit faster. The conversation was upbeat, and while the scenery wasn’t exactly spectacular on the highways, compared to my basement wall, it was heaven.

As we started to get into some rolling hills, Philip really started to kick things into high gear. By this point there were only about seven of us, and eventually everyone gave up trying to keep up to Philip’s murderous pace and just tucked in behind him and hung on for dear life. If you ride, I know you have been here. The place where you know you are going way too hard and you are going to pay for it later, but are having way too much fun to care. We were passing guys with huge legs and tiny asses. When we turned the corner into the check stops, I heard one of the guys we were riding with whimper “thank God”. Philip was killing it alright. And us along with it. 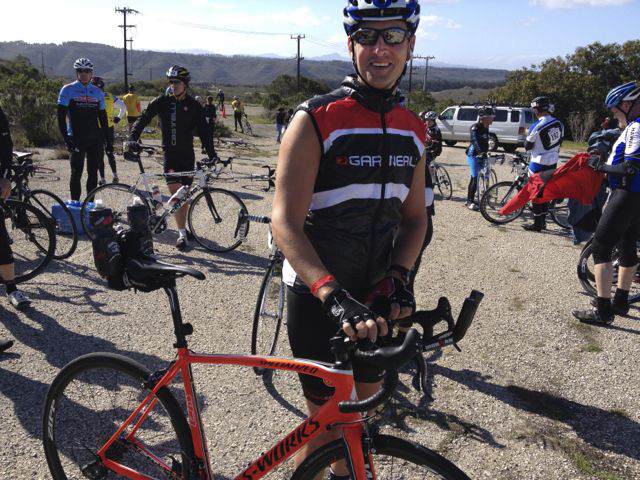 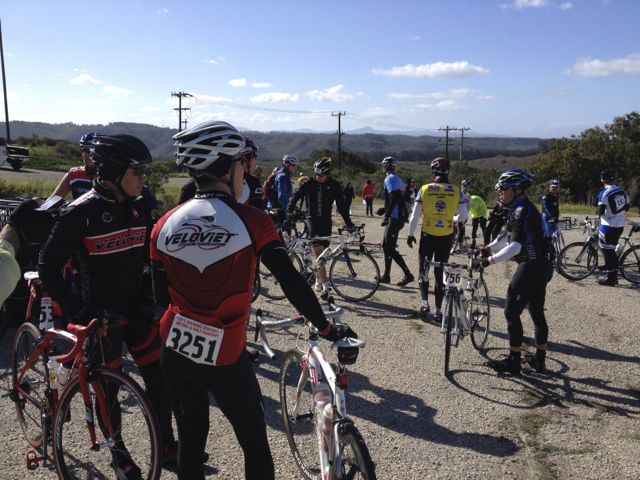 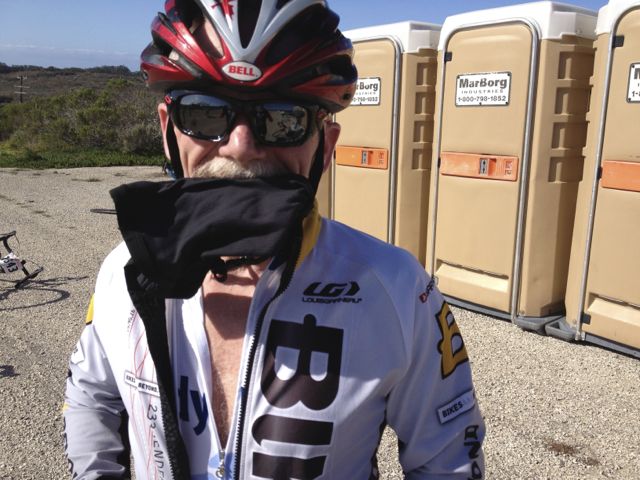 I decided I would hang on as long as I could, then just do what I could until the end. Not having done any long distance training per se over the winter, I knew it was just a matter of time. At approximately sixty five miles the wheels fell of my bus and I hopelessly watched as the group (which had now thinned down to four or five) started to pull away, even on the flats. After a long, hard effort with some very strong riders, I knew my goose was cooked and I needed to back off if I didn’t want to spend the rest of the week watching reruns of Law and Order.

With Philip somewhere off in the stratosphere, Ben turned around to retrieve my broken carcass just as the scenery started to get really, really, nice. 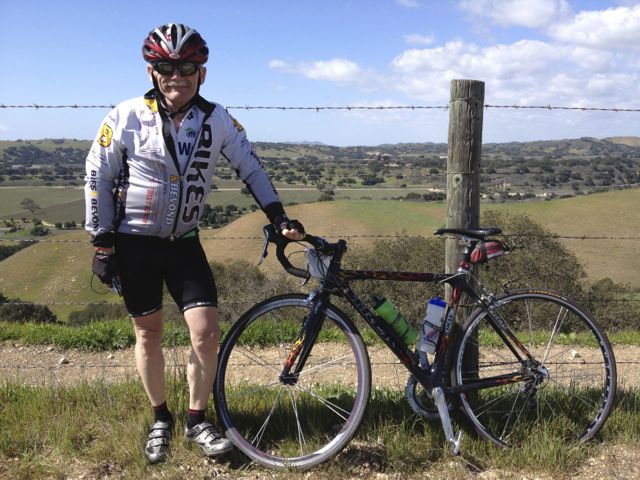 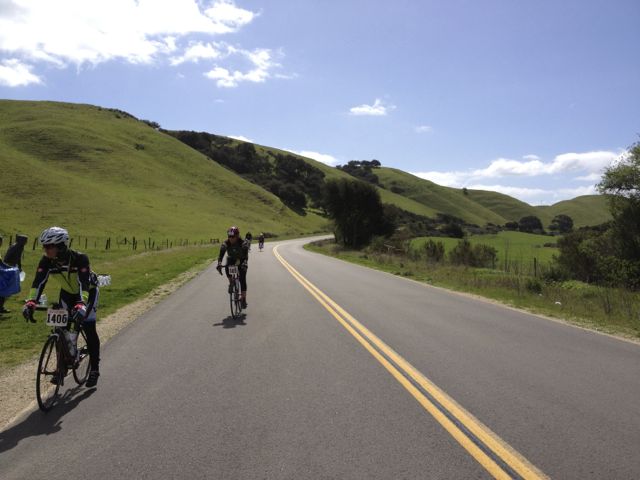 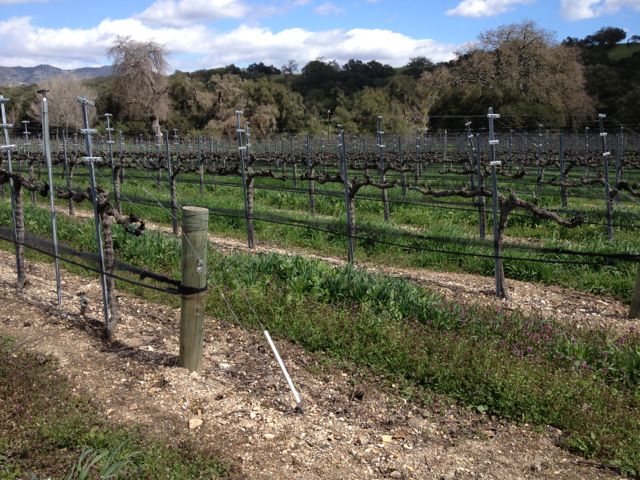 Who would have thought these gnarly, dead-looking vines could produce something as wonderful as wine. Sigh.

The next ten miles or so I yo-yo’d in the vast expanse between fabulousness and death. The low point came somewhere around here, where I decided I just didn’t want to pedal anymore. 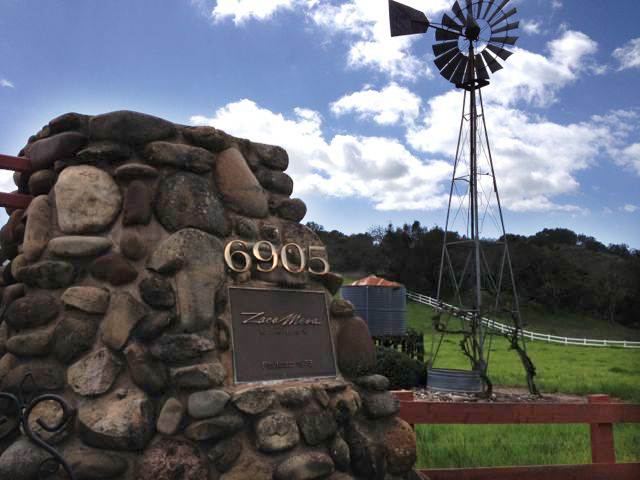 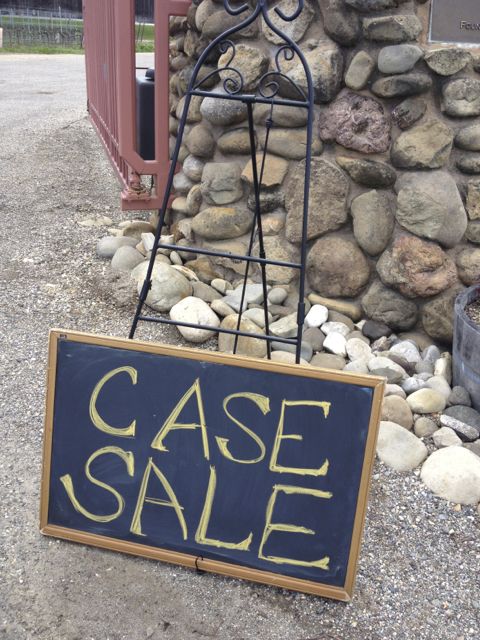 Given the opportunities presenting themselves, pedalling a bike around for what truly does feel like a hundred years was starting to feel pretty stupid. I was covered with salt and sweat and my nose would not stop dripping. As I stood at the entrance of the winery, a fellow rider rolled up to say hello just as I was struggling to remove as much clothing as humanly possible while maintaining what little of my dignity still remained.

“You’ve got to be Canadian.” he said.

(I totally did not)

The exchange was enough to send me on my way, stuffing a Cliff Bar in my mouth and washing it down with a Roctaine gel and a few salt tablets. Maybe it was the food, maybe it was the change in scenery, but after that I started to feel pretty good again. By that point, Ben and I were joined by a fellow from Santa Barbara named Nathan, who in addition to being a librarian and french horn player, sports a magnificent arrangement of facial hair. 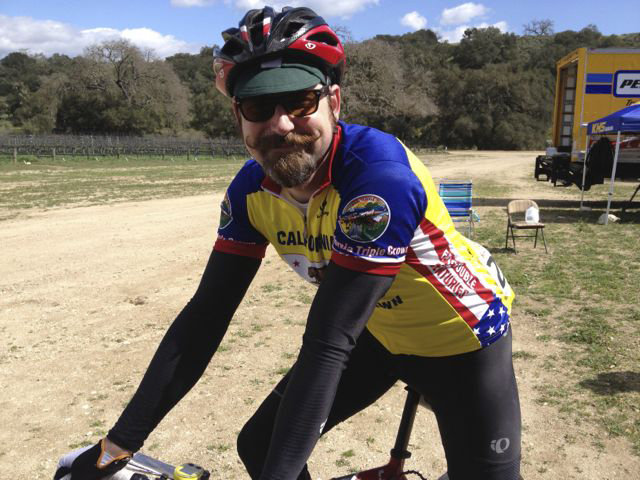 He and Ben happily chatted about the joy and misery of Paris-Brest-Paris – a ride much, much longer than this one, that at that point in time I would not even dream of doing. The rest stops were pleasant, if short, and each one offered something a little different in terms of snacks. This was my favourite. 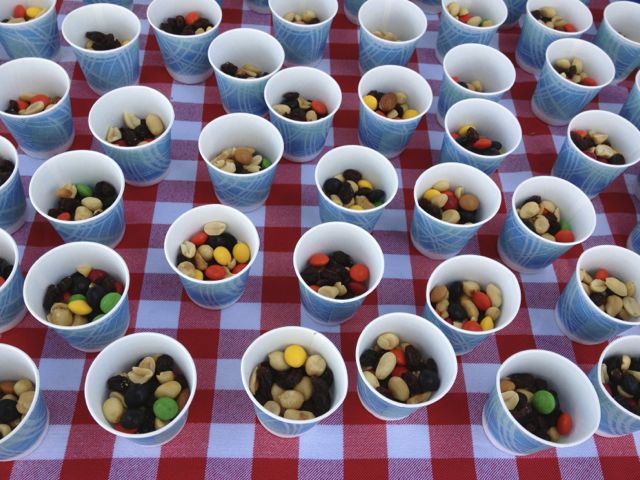 There was always lots of water, offered by smiling volunteers. 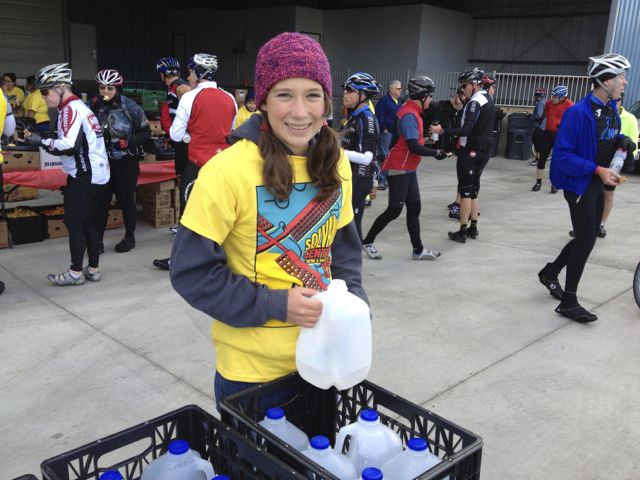 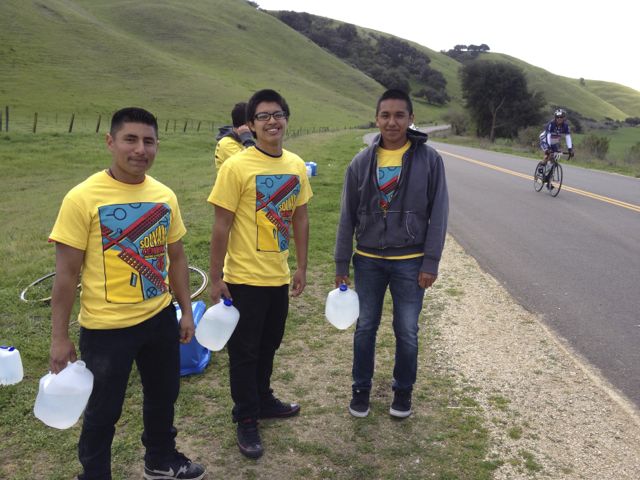 Wine would have been better. But I was grateful nonetheless.

Just as I was starting to feel like myself, I felt my wheel slide out on a sharp corner. It was a close call, and on the next corner when it happened again I knew my front wheel was nearing flat. We stopped and had things well under control when the SRAM team car rolled up to see if we needed anything. 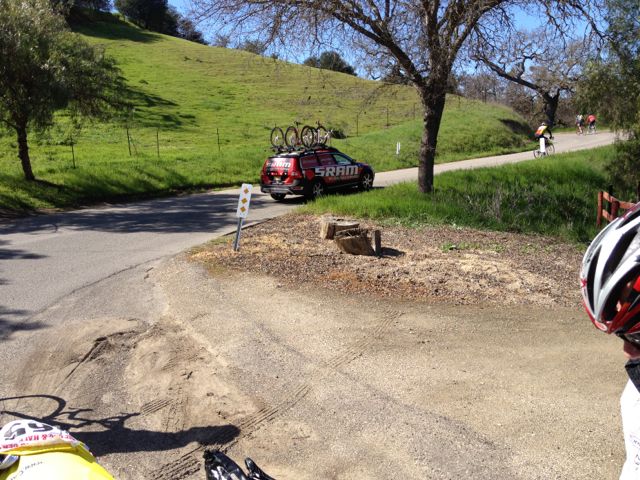 We shouted obscenities at each other in a foreign language and I threw my bike at them. We continued to pelt the car with water bottles until they drove away. Ok, I made that last bit up… in reality, we politely told them we were fine, then regretted not asking for a new wheel or bike.

The final miles of the ride were amazing – lovely winding roads through beautiful wine country with sprawling villas and rolling green hills and valleys spreading out in every direction. Every view was a postcard. We arrived back in Solvang and finally got to see how pretty it is without the distraction of getting to the race on time. 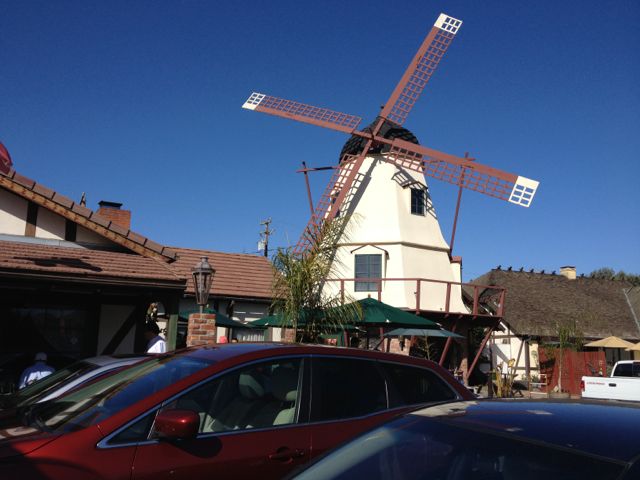 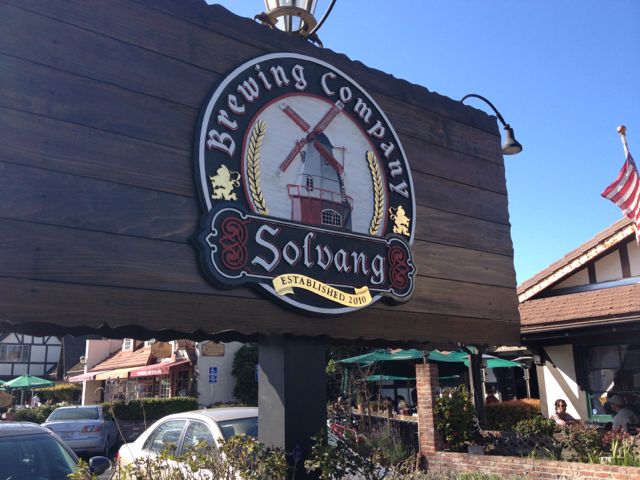 We found Philip, who had finished almost a full hour earlier, and arranged to meet Nathan for a well-deserved post-ride beverage, complete with a side order (for me) of Harden the Fk Up.

All whining aside, it was a perfectly glorious day.

← California – The Arrival
An Epic Day of Rest →