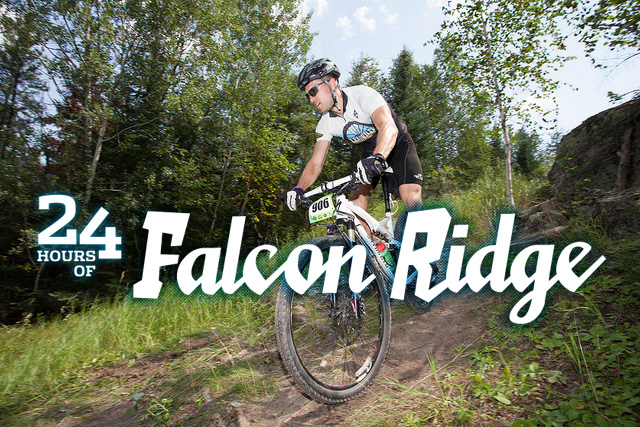 Not being one for moderation, it seemed only fitting that my first mountain bike race ever be an eight hour endurance race in some of the most technical terrain in the province. To be fair though, considering the other option was 24 hours, eight hours did seem the more moderate choice.

As you may know, my experience in mountain biking is limited. Very limited. But if I didn’t allow myself to go outside of my comfort zone once in a while, I’d still be an unhappy, overweight smoker obsessed with every calorie that passed my lips.

So how did it go, you ask? Well let me show you.

Yes, I am just that awesome. By the way, the photos at the end of the video were taken after a pre-race lap, the night before the race even started.

In spite of a plethora of spills and the accumulation of an impressive display of bruises, bites and scrapes, I have to say that 24 Hours of Falcon Ridge was a pretty amazing time. It might have had something to do with these fine folks: 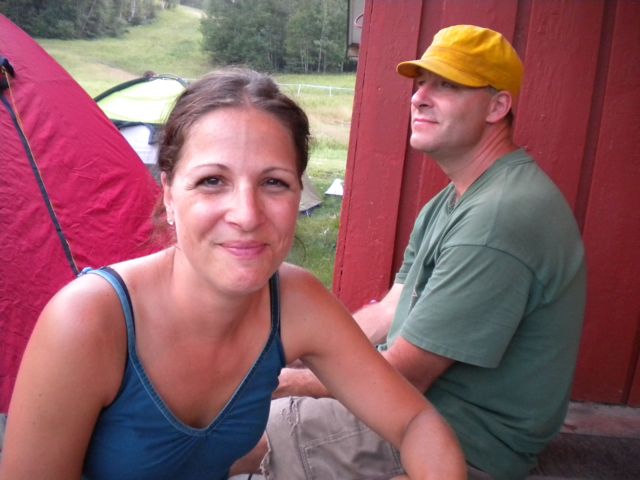 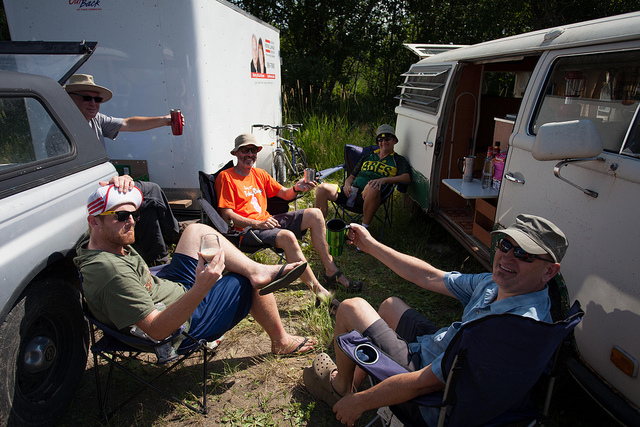 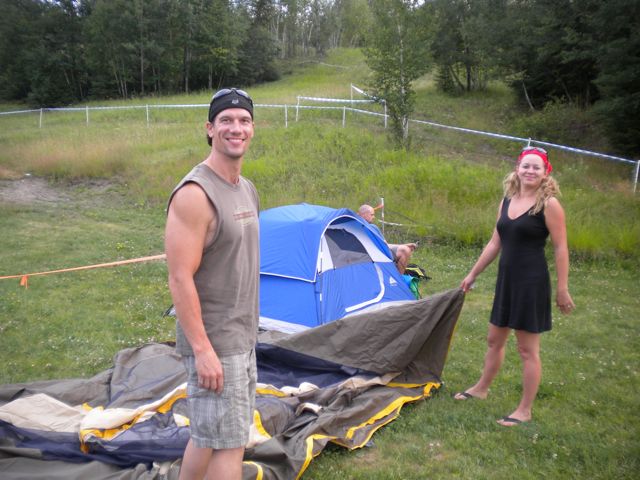 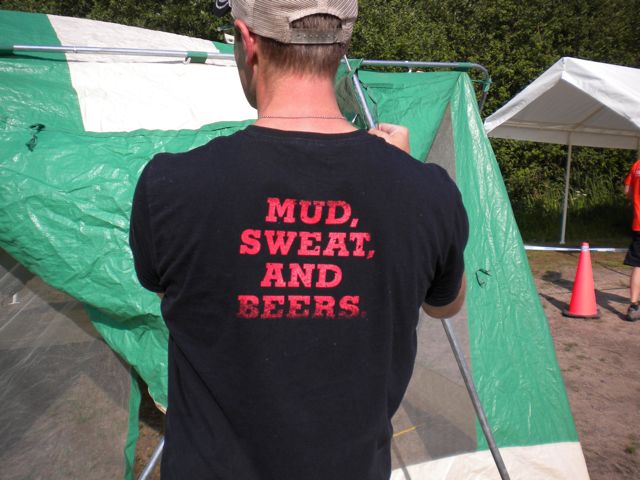 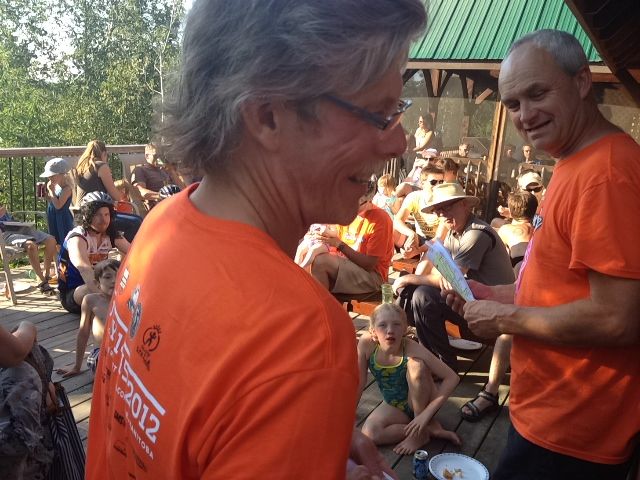 And maybe some of this: 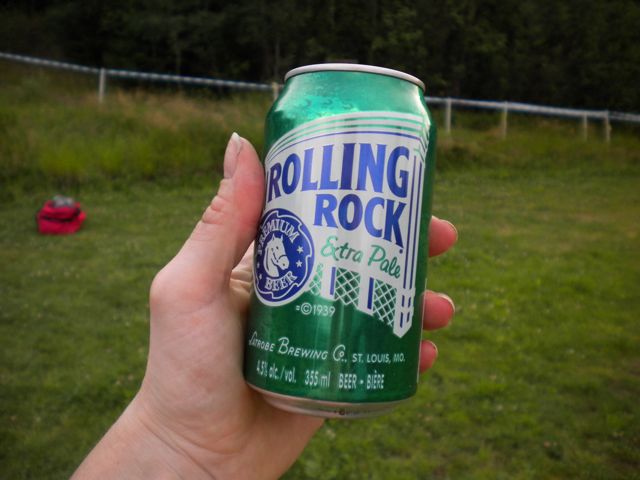 I wish I had more pictures to tell this story, but the battery on my camera died and as you can see, had I carried my phone it would certainly have been smashed to smithereens. But what happens in the bush, should perhaps stay in the bush.

I don’t think I have ever seen a group of people work so hard to put a race together. I though putting a cross race on was tough – imagine spending two days clearing 7 kilometres of trail through forest, bush and rock, in 35 degree heat. But that’s what they did. It’s pretty amazing to see three clubs combine forces to put on one kick ass event. Chapeau to Birch Club, Red River Racing and the Fort Garry Bike Club. These people really know how to work together to make wonderful things happen. 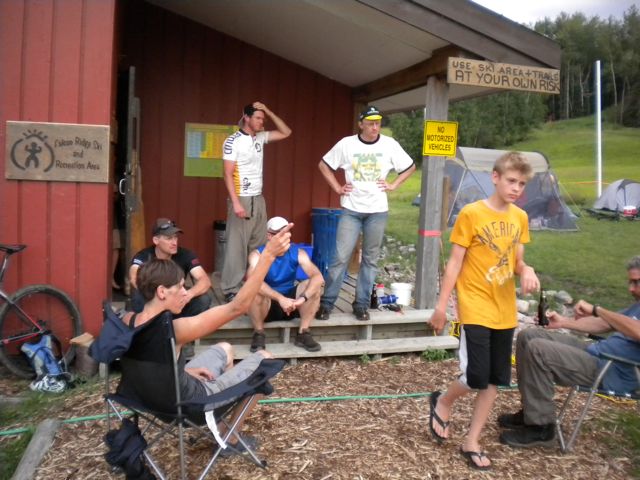 And do you know what KK did? He leant me his mountain bike! A really nice REAL mountain bike, even though he knew I would probably crash a million times and it may come back in pieces. 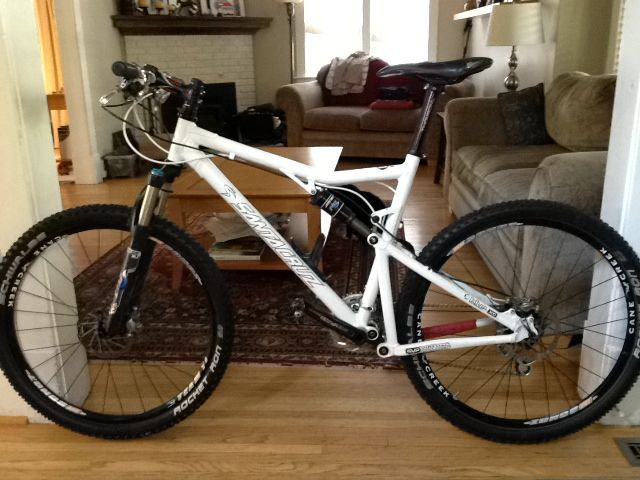 He even rode the first lap with me – perhaps to say final goodbye to his poor, doomed bike.

Chris had the right idea, wearing full body armour for his first lap, then ditching it once he was comfortable riding the course. 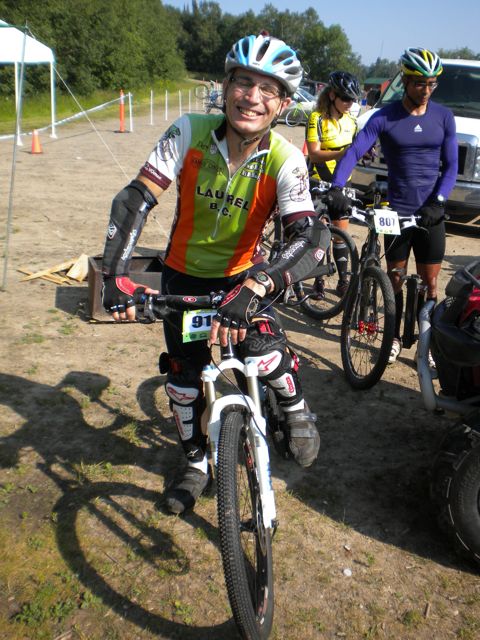 I wore kneepads for the entire eight hours, and in retrospect should have considered something with a bit more flair, like  perhaps a luchador mask, stripy pajamas, or Robin costume. 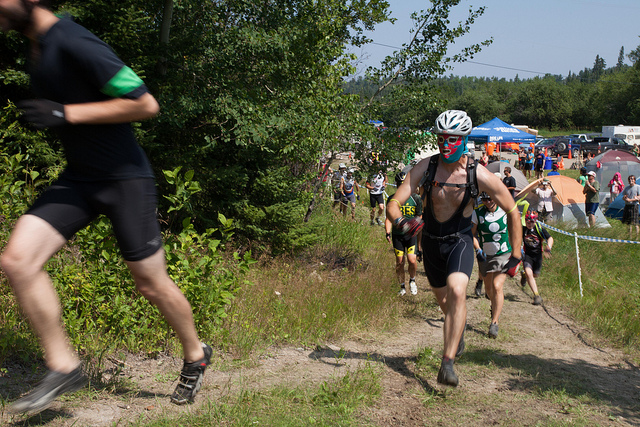 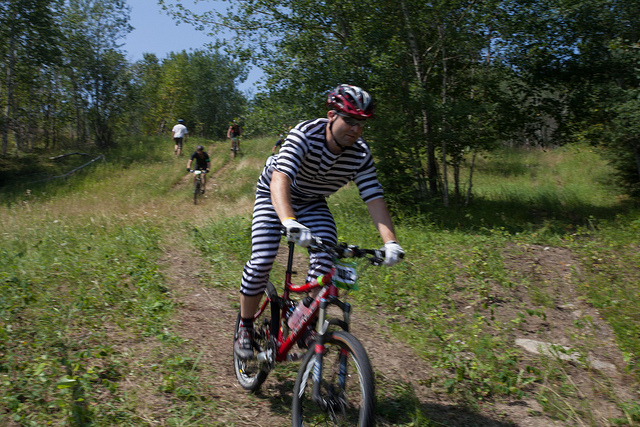 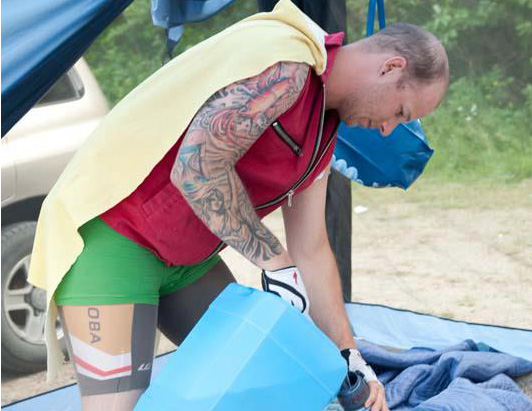 Marc was resplendent in his voyageur costume. And I really can’t think of anything more comfortable to wear in 35 degree heat than a buffalo hide. 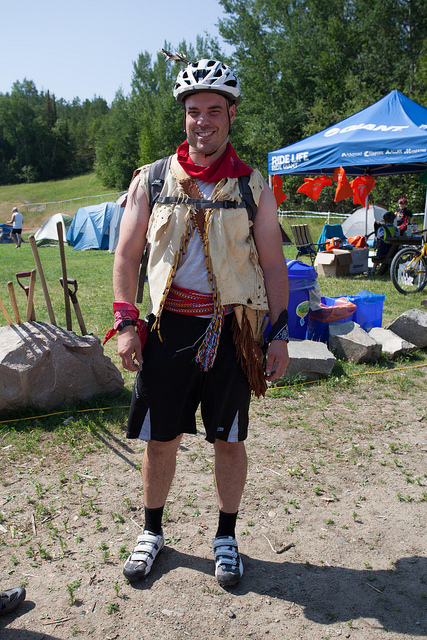 Next year I’m digging out the princess costume.

In the course of eight hours, I managed to complete six laps. Each lap was about 7km, and the fast guys were taking about 26-30 minutes per lap. I was taking close to an hour. That’s a lot of time in the bush my friends. But it was all worth it when I won second place in the women’s eight-hour solo event (there were two of us) – and received a twenty-five dollar gift card generously donated by Olympia. 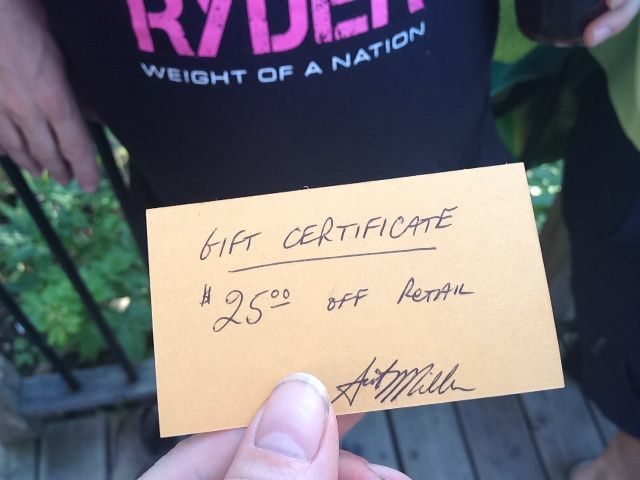 I wonder if they sell bandaids. Or do manicures.

Ben and Blake (the videographer responsible for that spectacular endo at the bridge) tied for first place in the men’s eight hour relay, completing approximately triple the number of laps I did. Well done boys! 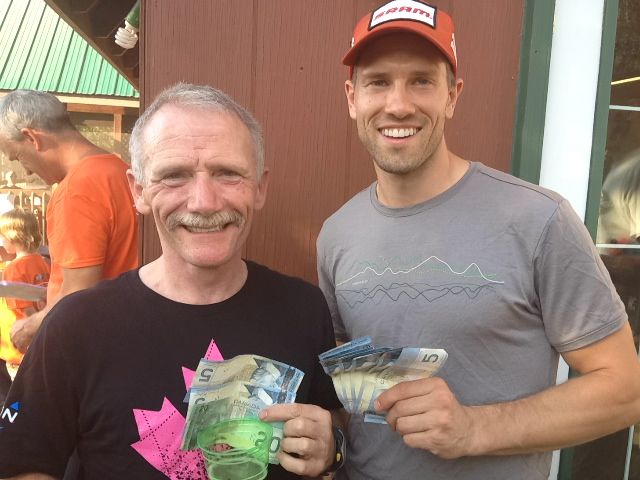 Racing in the heat is very hard work. Time to rehydrate. 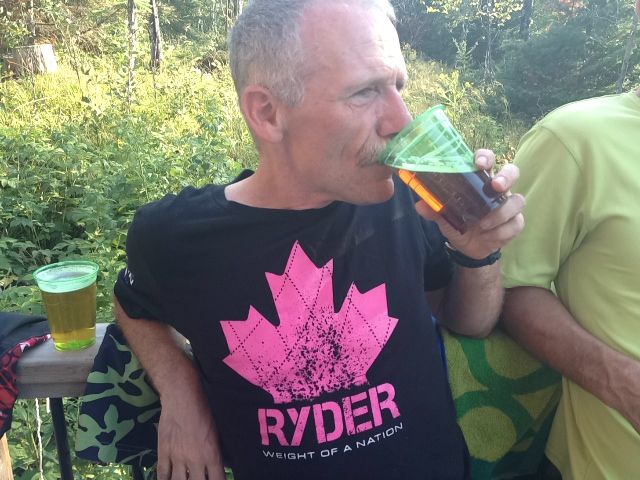 Kevin B. also won big. It is clear this is his natural habitat. 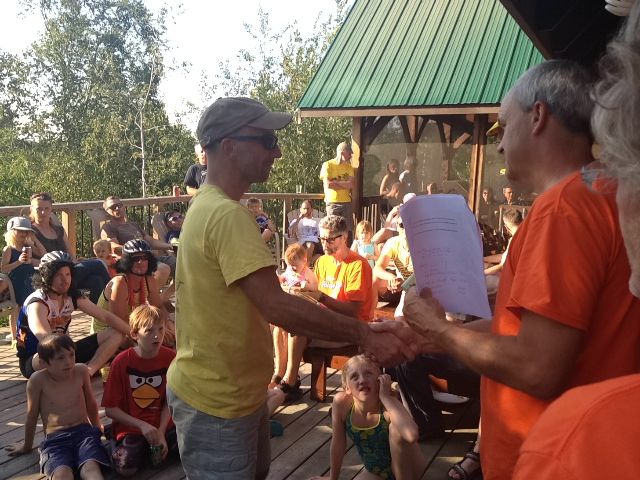 G should have won for the best use of facial hair. Sadly I have no photo evidence, but his newly grown mutton chops can only be described as “Wiggins-esque” (minus the potty mouth).

I must offer a special chapeau for fellow girl-racer Seema, the only female who did the 24 hour solo event. You GO girl! (and go, and go and go…) 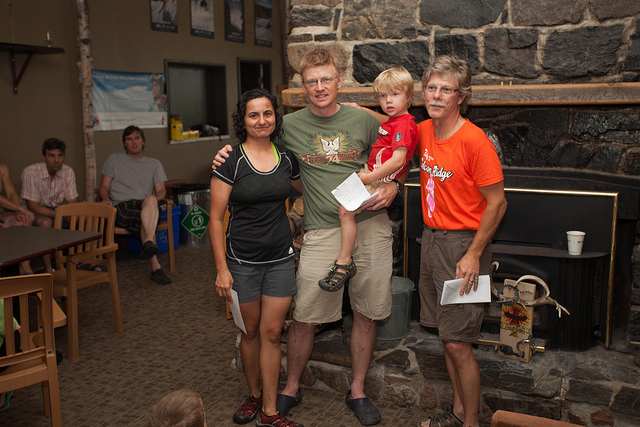 I have come to the conclusion that all bike races should be followed by a kegger and dogfest beside a beautiful lake at sunset. Is that too much to ask? 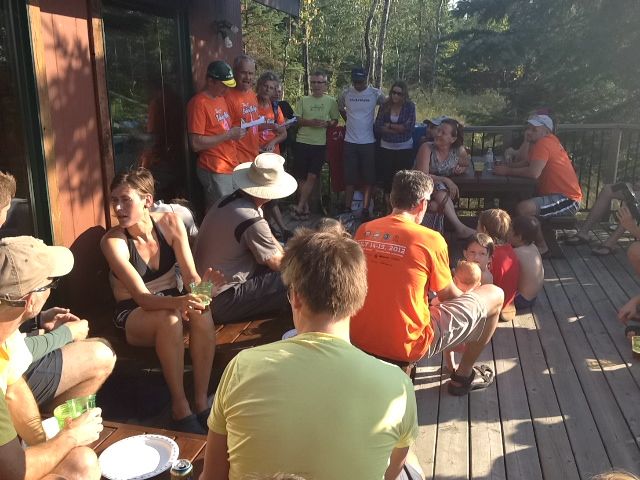 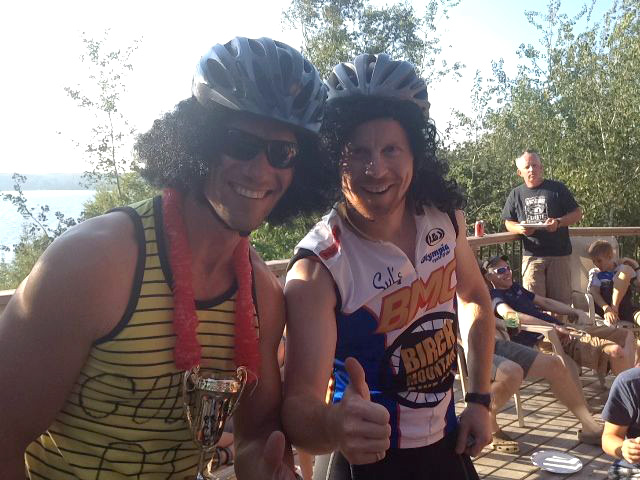 I will never be a mountain bike champion. Not by a long shot. But I can take some satisfaction in the fact I have given it a pretty good go and somehow managed not to die in the process. It wasn’t pretty, but it sure was fun. Thank to everyone for your advice and encouragement, and for not running me over on the course. And props to the Falcon Trails Resort for letting us use their amazing location. (next time I’m renting a cabin with a hot tub). See you next year – I should be healed by then.

← The Good Old Days
Cycle Chick Joins The Dark Side →