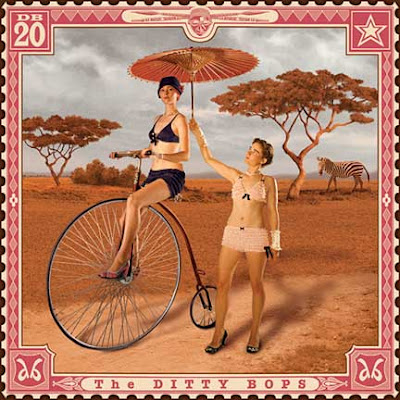 Being “chicked” (noun) is the act of getting one’s ass kicked by a girl. Typically, the expression is used in the context of sports, and is especially humiliating when said chick is your girlfriend or wife. Now, despite some exceptions, it is no secret that a man with equal fitness and athletic ability as a woman will generally be stronger and faster than their female couterparts. Hence the need for the “ladies” tee (ug), and the division of men’s and women’s pro sports teams and olympic events. Not to mention separate toilets and showers, because we’re also different, you know, “down there”. Did you know there is a Women’s Tour de France? Of course you didn’t. Because unlike women’s beach volleyball and mud wrestling, you are unlikely to see nipple during the race. If the Women’s Tour ever hopes to get covered by TSN, they need to show skin and lots of it, or make it full girl-on-girl body contact. This is a sad but true reality. 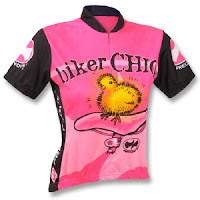 Another major difference in men’s and women’s cycling is the gear. Here’s the part where I get into full-on Cyclechick rant. If you walk into a bike shop, you will immediately be able to spot the “Ladies” section because of the sickening sea of pink. From wall to wall and ceiling to floor of the approximately 10 square feet they allot to the softer sex, it is a mishmash of flowers and butterflies, not unlike the feminine hygiene section at the drug store. There is usually a token “tough chick” item, in black, but it will inevitably be emasculated by a drawing of fuzzy yellow chick. Yup. Just like Easter. (haha, how cute, it’s a “chick”, get it?). Everything is pink, from our socks to our bar tape, and this chick (not the fuzzy yellow type but rather the pissed off girl type) doesn’t like it.* So I have a simple rule for myself: No Fucking Pink. The only notable exception to said rule would be if I won the Giro D’Italia (the Italian equivalent of the Tour de France), who’s signature winning jersey colour is the cutest, most bubble-gummiest pink around. God love the Italians, who are so completely secure in all their Italian Manliness that they would choose such a girlish and flaccid colour for their premier men’s cycling event. I love that pink because somehow, it is different.

*Note: In defense of Good Bike Shops Everywhere, it must be noted that the best ones out there (you know who you are) don’t treat girls like girls when it comes to our bikes. On the other hand, the bad ones (you are probably clueless) see boobs walk in the door and go into autopilot, directing the boobs to the entry-level merchandise assuming boobs can’t really tell the difference anyway. Shame on you. Also, I cycle with some crazy strong women who do choose to wear pink, and butterflies. And these women kick serious ass.
Now here’s the thing. In my normal life, I LOVE being a woman. I love lipstick and high heels and sparkly things. I expect the door to be held open for me and am secretly thrilled to get a whistle from even the most gross construction workers out there. I wear pink, and lots of it. But that all gets checked at the door when it comes to sports. When I am on my bike, the differences between me and the man next to me disappear. I suffer and sweat and swear, and sometimes have to blow snot onto the pavement. I pee in bushes and arrange my tender parts to be more comfortable on my saddle. I do not expect to be coddled and waited for if I get dropped, at least not any more than the men in the group. In fact, I have the excellent fortune of cycling with men who will not hesitate to drop me if I am slow, and will let me change my own flat tires (unless I’m really struggling and about to cry). Gentlemen, I tip my helmet to you.
There is a strange dichotomy of being a female who loves to cycle, or participate in any other male-dominated sport for that matter. The majority of my life is spent enjoying the many pleasures of being a woman. I am a wife, girlfriend, mom, sister, auntie and daughter. I bake and sew and shop and dress like a woman. But when I bike, I choose to bike like a man.