What were they thinking?

This weekend, in preparation for Italy, I rode my bike 200 kilometres. Mostly on quiet, rural roads, where I found the drivers (with only one rude exception) courteous and patient, giving me oodles of room when they passed. Once I crossed back into the city limits, however, it was quite a different story. I was repeatedly buzzed, cut-off and generally disregarded, to the point I stared to wonder if my childhood dream of invisibility had finally come true. When I did make it home alive (by no small miracle), a quick check in the mirror told me that was not the case. So it left me wondering what was going through the minds all of these nameless strangers who had, to varying degree, recklessly endangered someone’s life, then carried on their merry way.

Unfortunately, I can no more read minds than I can turn invisible, so I thought I would take a crack at guessing what they were thinking. Here goes.

Who: The guy on a bike who ran a busy three way stop and almost smashed into me when it was my turn to proceed through the intersection.

Guy on Bike: “Do dee do dee do, I love to ride my bike! It’s so fun! But braking is for suckers. I sure am glad I’m riding a bike and not a car so the rules of the road don’t apply to… HEY WATCH OUT! Can’t you see I’m riding my bike! Stupid cyclist, who does she think she is?”

Who: The people responsible for the ridiculous and dangerous new “bike lanes” on Pembina Highway, that include bus shelters who’s doors open right onto the path of the bikes.

Bill: “Hey Marcy, how do you like my plan for the new bike lane on Pembina?” 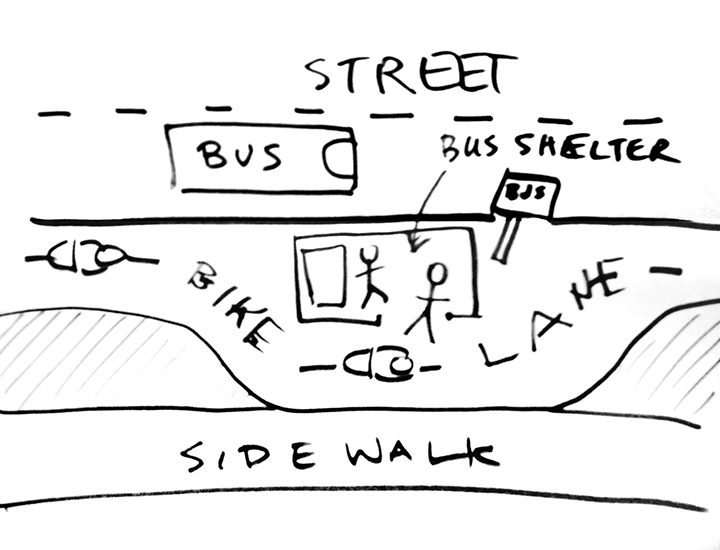 Marcy: “Looks great Bill, but won’t the bikes and pedestrians collide when people leave the shelter to get on the bus?”

Bill: “Haha! Of course! But unlike car/bike collisions, when bikes collide with pedestrians, MPI isn’t responsible, so it doesn’t cost the government any money!

Marcy: “Wow Bill, that is awesome. I bet you’ll get a promotion.”

The Pedestrian I almost hit when he suddenly stepped out in front of my bike in order to catch his bus: “HOLY SHIT!”

Who: The car full of guys who thought it was SUPER FUNNY when I almost smashed into the side of their car as they cut me off to get to Tony Romas.

Guy 2: “WOAH! Did you see that! That lady on a bike almost smashed into the side of the car!”

Who: The driver of the truck who buzzed me, even though there were three empty lanes beside him.

Driver: “Oh, look! A cyclist! I love this game… let’s see how close I can get without hitting her. Closer… closer…. YES!!! Probably my best one yet, I must have been no more than six inches away! In your FACE motherfucker! Oops, I’m late for church, better get a move on.”

Who: The woman who turned left in an intersection and almost smoked an elderly lady on a beach cruiser so she wouldn’t to have to wait 3 seconds for the next break in traffic.

Hurried Woman: “I sure would like to be home watching TV instead of in this car. I could be missing something really important! Stupid Sunday traffic! Oh good, here’s a break in traffic. Drat! There’s an old woman on a bike. She’s not going fast enough!! Hmmm. She can’t weigh anymore than about 120 pounds, so she probably won’t even leave a dent – I’m going for it!

Oy. I should (and will) mention that all of the above encounters occurred in a time span of approximately 25 minutes on a Sunday, about 5:30pm.

Even if you can’t read minds either, you probably know what I’m thinking. It was a scary, frustrating, and stressful ride that left me both furious and sickened by a handful of my fellow Winnipeggers, not to mention the state of affairs in general.

I try to stick up for Winnipeg drivers and cyclists whenever I can – after all, for every bad encounter, I have many, many encounters that are without incident, and might even be described as pleasant. I like to think that while we have a long way to go to becoming a bike-friendly city, Winnipeg is making great strides in improving infrastructure – or at least trying to look like we are. But a ride like this underscores the mountain of work ahead, and the risks that exists for people who choose to ride their bikes in this city. The reality is that, in terms of “bike cities”, this is the wild west, and it behooves every one of us, whether on a bike, in a car, or on our own two feet, to watch out for ourselves.

And maybe – just maybe – watch out for each other too.

← The Guerciotti Project, Stage 5: All about The Stem
Mamma mia! →