September 28, 2013 · by CycleChick · in The Campagnolo Experience, Training, Travel, Uncategorized 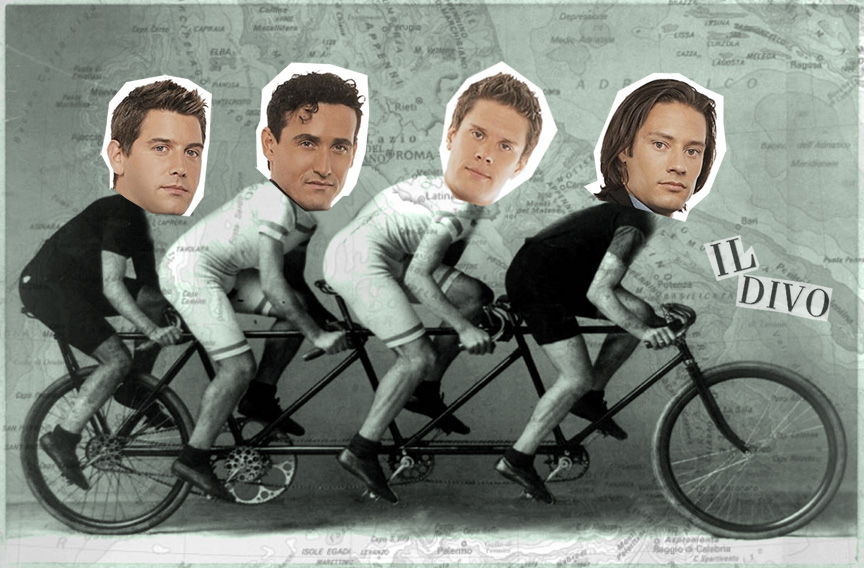 In case you missed it, a while ago I entered a contest on Facebook for a dream cycling tour in Italy called The Campagnolo Experience, which I WON in a random draw. Some Bitter McBittersons out there have been insinuating that the contest was fixed, and that the tour company, Thomson Bike Tours, deliberately picked me. Of course it makes perfect sense that out of thousands of hopeful contestants, they would select a middle-aged amateur rider and hockey mom from Winnipeg who could regale all 27 of her loyal blog readers with tales of how awesome it is to get her ass kicked halfway across Italy by a bunch of retired pros. That, my friends, is some pretty sound logic.

To set the matter straight, anyone (including the McBittersons) could enter. I am not being paid to go, nor is there any obligation for me to write nice things about anybody. When I spoke to Kate from Thomson Bike Tours on the phone, she didn’t know anything about me or my blog, and was pretty relieved when I said I could ride a bike.

On the upside, we will be travelling in style, fully supported by qualified mechanics, professional ride leaders, SAG wagons (thank God), and a full support team to make sure everyone is safe and comfortable. The tour promises VIP treatment, appearances by pros and other cycling celebrities, and wraps up with a tour of the Campagnolo factory in Vicenza, just outside of Venice. Yes. The Campagnolo. Arguably (but barely) the manufacturers of the best bicycle components in the world. I have never had the pleasure (ie. the money) to ride Campy parts, but when I speak to friends who ride even the entry level gruppos, their eyes glaze over as they describe the beautiful sound and feel of Campy shifting as if it were a religious or sexual experience. When I imagine visiting the factory, I can’t help but think of Charlie and the Chocolate Factory, but with vats full of edible chain lube and a forest of cassette trees.

This tour is not about slumming it. No shitty hostels with 10pm curfews and hairy German hippies who don’t believe in soap. No sir. We will be staying in places like this. 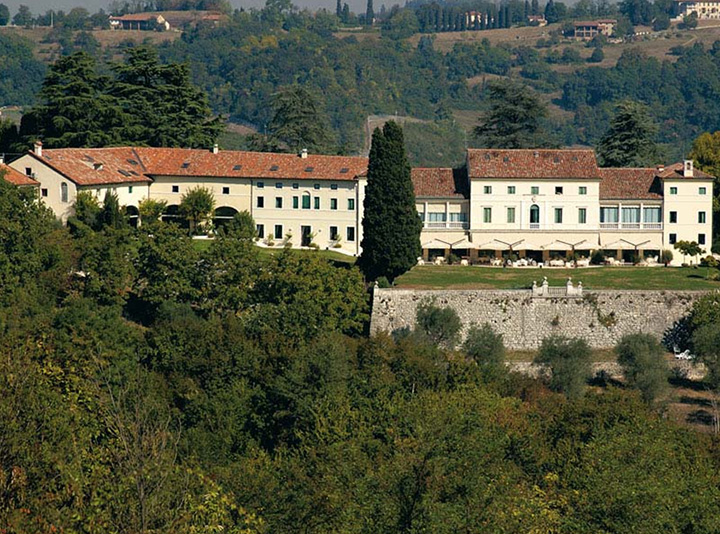 Once the reality of things sunk in and I had come off the ceiling, I realized I had just seven weeks to prepare. So how does one prepare for something that intense in such a short period of time? The real answer is, you can’t. But with some help from Coach Rick, I have been following a plan that might, at the very least, help me survive.

Ride Long
I have been riding as much as possible, or as much as someone with two school-age kids and a day job can train without going broke or getting a divorce. During the week, I ride early in the mornings. At this time of year there is only daylight from from seven in the morning until eight in the evening, so I’m doing lots of riding in the dark – which I figure will be an excellent simulation of the darkness I will experience in the pain cave sometime around day three of the tour.

I’ve been doing progressively longer back-to-back rides in on the weekends, out on the open Manitoba prairie, which looks about as similar to Italy as I do to Sophia Loren. I have attempted to simulate the Mediterranean conditions by putting red wine in my bidons, yelling at the cows loudly and with accompanying wild hand gestures, and listening to six hour playlists of Il Divo.

Ride Hard
Riding 200 kilometre days is one thing, Riding 200 kilometre days in the mountains is another thing entirely. Winnipeg is in the middle of the Canadian prairie, where it’s so flat you can watch your dog run away for three days. High intensity rides will both boost my V02 max and prepare my leg muscles for the shit ton of climbing we’ll do.

What the Winnipeg area lacks in elevation it more than makes up in wind, which can be an excellent simulation for the intensity of climbing. So I get into my hardest gear, point my bike into the wind, and ride like hell.

We do have one hill here. A mad-made number affectionately known as Garbage Hill, on account of its past as the local garbage dump. At some point in our fair city’s past, the garbage was covered with dirt and transformed into a park of sorts, that serves as the only thing for miles with more elevation than a highway overpass. If you go at dusk you can catch a pretty good sunset there. If you go much later, you can catch some less desirable things, like tetanus, drug overdose, or a nasty case of the clap.

This also happens to be cyclocross season. Most cyclocross races are about 50 minutes of anaerobic hell, guaranteed to up your VO2 max by about a million percent. The downside to this is that cyclocross also happens to be a little crashy, especially for someone like me who tends to do better riding in a straight line on pavement. At this point, the aerobic benefits of cyclocross racing may be outweighed by the high likelihood of eating shit and ending up in traction.

Star Gazing
The tour promises visits from cycling celebrities and VIPs throughout the trip. On the off chance my lifelong dream of meeting Eddy Merckx comes true, I am learning how to scream and faint in French. 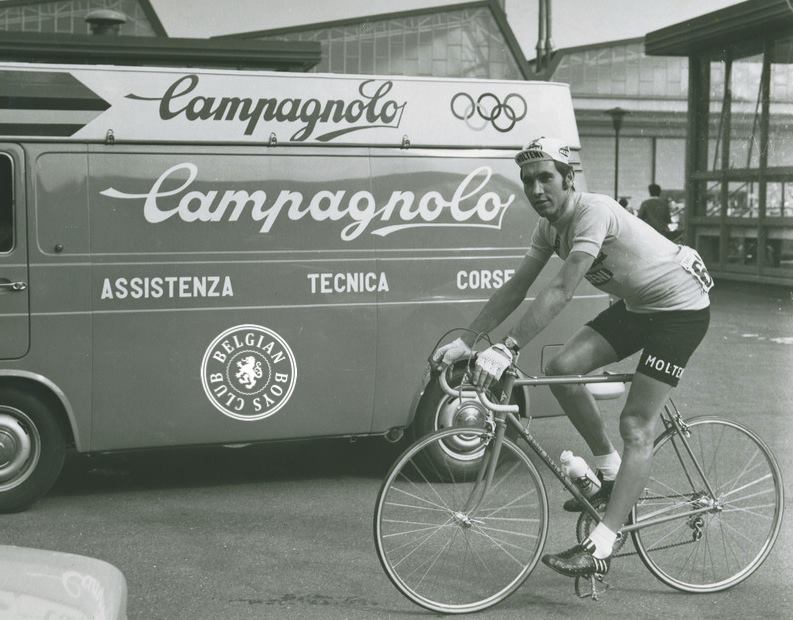 I have also decided to go on the pill just in case Mario Cipollini is there and we happen to make eye contact or shake hands.

Gearing Up
One cannot exactly have The Campagnolo Experience riding Sram. It took some doing, but between Campagnolo’s Press Manager Joshua and tour manager Sergi from Thomson Bike Tours, it has been arranged that I will ride a Bianchi Sempre (naturally) all pimped out with the latest in Campy bling. I don’t know what gruppo yet, but I sure hope it rhymes with Pooper Decord.

Of utmost importance in the whole adventure is what to wear. We are talking about Italy after all, a world powerhouse of fashion. Thomson will be supplying a pretty sweet kit, and the official jersey from the Granfondo Roma is quite spectacular too, if a touch macho.

As an aside, the granfondo website has assured me there is a place I can put my wife while I ride. A wife corral if you will. What a relief, we can’t have the wives running willy-nilly all over the place. Pandemonium.

The Other Stuff
Of course there are lots of things I should be been doing that I’m not. Things like strength training, which I’m not doing because a) I didn’t want to introduce anything new or different into my routine so close to the tour, and b) I don’t have bloody time.

I should also be watching what I eat and drink. Weight can mean a big difference when you are climbing. This is especially obvious when you think about all the money some people spend to save precious ounces on their bikes. Yes, even big fat people. But now is not the time for a drastic rethink of my diet, or to deprive myself of the joy I get from a lovely glass (ie. bottle) of red wine. Moderation will help to keep me at least as healthy and strong as possible.

And finally, when you train hard, you need to rest hard. I should be doing yoga and getting massages too, but there are only so many waking hours in a day, and at this point they are being spent either at this laptop or on my bike. So until I can find a therapist who will massage me in my sleep, my back might be a little achy and my IT band will remain as tight as a violin string. My recovery regime includes one full day off a week, plus some home stretching, use of the foam roller, and plenty of sleep.

Will I survive? Of course. Will it be a challenge? Yes. Will it be the trip of a lifetime? Most definitely!

← What were they thinking?
I Hate House →