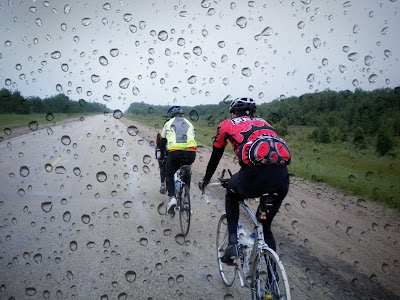 I read recently that what is unique about any endurance sport is that whether you are feeling really good or really bad, don’t worry… it won’t last. This was certainly true of the 300 (and twenty) kilometer brevet that I did this Sunday with Ben, Michael, Chris and Andrei. The (and twenty) was a fun little surprise I found out about a day or two before the ride. Like 300 wasn’t enough. A century (100 miles) is considered the marathon of cycling. We would be riding 2 kms short of double that. Here was our route: 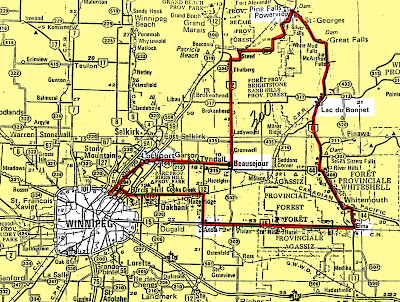 The weather forecast was bleak, moderate temperatures with almost constant rain throughout the day. But compared to the 200km ride a couple of weeks ago in the lightning storm, it seemed rather pleasant. Rain can be a bummer on any ride, especially a long one. But the real villain of cycling weather is wind. On the prairies the wind more than makes up for our deficiencies in elevation and can turn an otherwise pleasant ride into a complete sufferfest. There is almost always wind to some degree, but Sunday was a rare exception. The winds were very calm, allowing us to ride steadily throughout the day without the usual necessary changes in effort and formation to compensate for gale force winds.
Because these are “official” events sanctioned by the Audax Club Parisien in France, there is no messing around with the ride itself. The route, control times, day and start time are all preordained well in advance by Brian Leier, who represents the organization here in Manitoba. I had attempted to bribe Brian with chocolate cake if he were to move the start time from the uncivilized 5am to a more reasonable 6am, but he proved incorruptible. I should note here that Brian is something of a celebrity in France, having done the 1,2000 km Paris-Brest-Paris ride a whopping 6 times.

Reluctantly, I set my alarm for 3:30 IN THE MORNING to allow time to get ready, pick up Ben and Chris, and drive out to Henderson and the Perimeter for the ride start. When we arrived, Brian, Michael and Andrei were already there. Andrei had missed the last 300 two weeks ago after arriving a few minutes late and being left behind (Leier rules state you must be on time). He had contemplated sleeping in his car, asking us to wake him when we arrived. Imagine a 6’4 Russian dressed in spandex sleeping in a car with a bike on top, parked in a 7-11 parking lot. 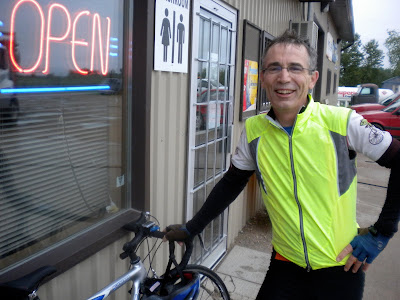 Although it was drizzling, it was relatively warm. We had certainly ridden in worse. The first 50km were great, we rode at a good speed, single file with everyone taking long fast pulls of 4-5 minutes or more. That brought us to our first control, the bustling town of Anola (to be fair, no normal town bustles at 6:15 am. If they do, it’s just creepy). Next control was at 95km in Elma. We had been there 2 weeks ago when we rode the 200 route so now we’re practically regulars, along with the 98 year old woman who comes to feed the stray cats every morning before toast. The waitress patiently scribbled down our very particular breakfast orders while we dripped all over the clean floor: poached eggs, whole wheat toast no hash browns, butter on the side and extra bacon; scrambled eggs with extra ham instead of hash browns, rye toast with no crust and a pony please while you’re at it. Generally the townsfolk we encounter are friendly, curious, and think we are totally crazy. 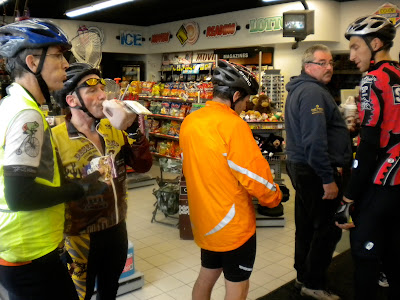 For the most part, the nature breaks on this ride were civilized, and happened at gas stops with proper toilets, toilet paper and locking doors. This is not always the case. On long rides we are often forced to pull over in the middle of nowhere when nature calls. At these moments I am reminded I am the only woman in the group. While the boys merely dismount, lean against their bikes and let fly, I am forced to go foraging in the sparse prairie bush for a semi-private spot to pee. Sometimes in order to be hidden from the other riders in the group I am totally exposed to traffic. I am getting particularly cranky about peeing au natural after a week spent watering cacti in Arizona, as well as contracting a nasty case of poison ivy a few weeks ago north of Winnipeg. It’s amazing how luxurious a truck stop bathroom with a plugged toilet can be, given the alternatives. 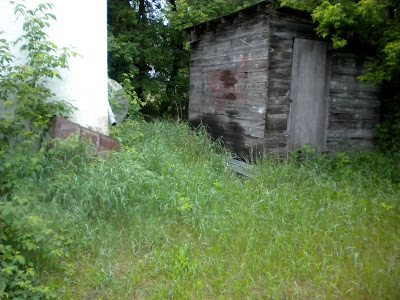 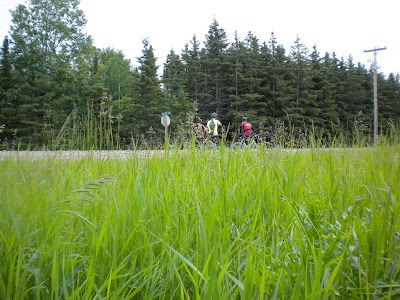 After breakfast we hummed along for another 50 kilometers to Lac du Bonnet, a stop I don’t even remember to tell you the truth. We were in the groove now, maintaining good pace and still well within our comfort zones. I have been asked about the scenery and wildlife on these rides, but for the most part all I see is wheel. I rode behind Andrei for a good part of this stretch, and was greatly admiring his white Continental 4000 tires. It had rained so much that they were perfectly white, the road having been washed clean of any real dirt and oil. On stretches like this I keep occupied with silly things, like trying to maintain perfectly synchronized cadence with the rider in front of me. I realize I am a bit of a masher (someone who tends to pedal more slowly, in a heavier gear) and need to work on my technique to spin faster and smoother, to expend less energy and keep my legs fresh. I concentrate on standing for 10-15 pedal strokes every 10 minutes or so, because my ass will thank me for it later. I make sure to take some water every alternating 10 minutes to keep hydrated, which seems ridiculous in this constant rain that soaks us. Next thing I know there is an ABBA song running through my head over and over. It all helps pass the time in our less social, but necessary single pace line. 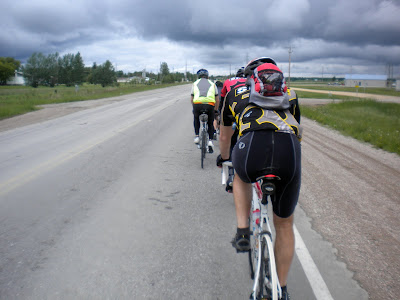 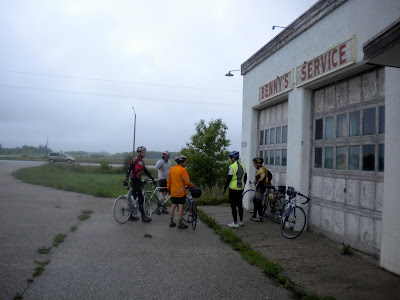 Next stop, another 50km to Powerview, just shy of Pine Falls which brought us roughly to the 200 km mark. We were far from home, but feeling good. Good enough to have a beer with lunch, in fact. My feet were wet and my legs (and other parts) were getting tired, and I don’t think I have ever tasted anything as good as that salty beef and rice soup and nice cold Sleemans. Hey if Lance can pound back girly beer like Amstel Light during the Tour de France, I can sure as hell sip a Sleemans with lunch. 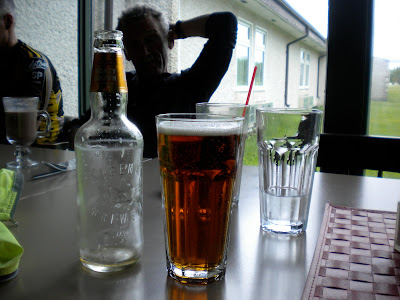 Maybe it was the beer, but I felt great over the next 75 km to Beausejour. A bit of a meandering road until we hit the #12 highway, which Ben had warned was straight and boring. Lucky for us the road had been resurfaced recently and we had a bit of a tail wind, so we positively sailed through that stretch. I had another embarrassing chick moment when a big brown dog came running and barking out of a yard, catching me totally off guard. I screamed (out loud, not just in my head like I wished I had). The dog stopped and loped back to it’s yard having done it’s dogly duty. Nobody said a word, we just kept pedaling. Stupid dog. 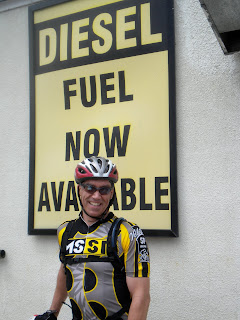 We were held up in Beausejour for a bit as the heavens opened and it poured rain. The rest was nice and we shared coffee and snacks in the local gas station. Once the rain stopped we hopped back on our bikes for our final 50km back to the finish. This is where things got a little ugly. Along the 44 highway to Lockport, there was a bit of wind and no shoulder, so the draft was minimal at best. There was a lot of traffic and it had started to rain. There is something that happens to Michael when the conditions get bad. He starts to go very, very fast. He has explained this is something he does on purpose to “get that part over with”. The thing is, Michael is a machine, and can do that even after 280-odd kms. The wheels fell off the bus for me along this stretch as I struggled to keep up, to try to stay out of the wind. But there was nothing left, and no relief. As I was getting dropped, Chris and I yelled at the same time”Michael!! Slow down!!!” but they were too far ahead. Eventually they stopped and as we rode by Michael, Andrei and Ben, Michael offered me my rain jacket, a nice gesture, maybe to say sorry for going so fast. But at that point I was already soaked to the bone and afraid that if I stopped I wouldn’t get going again, so I declined and blasted by at all of 22 km/h. I limped into Lockport and we stopped briefly at Skinners, where I plopped myself on the dirty ground to stretch what was left of my legs. I was horrified to run into a business associate, who came up to say hello. I was wet, dirty, dressed in spandex and likely smelled of sweat and beer, possibly pee. My face was covered with dirt, and I had snot on my shoulder. I think we had some semblance of a normal conversation but really can’t be sure.

The last 20kms down Henderson Highway was hard, but I knew we were almost home. At one point I started to feel very lightheaded, and frantically stuffed a Clif Bar in my mouth, thinking how much it would suck to pass out or puke in the last 10km of the ride. This is technically referred to as bonking. It’s the point at which your body tells you to go straight to hell.

Sound like fun? Well it was, and tons of it. I am often asked why I choose to do this. The answers sometimes change, depending on the day, but for the most part they are simple. I do this because it’s hard, and because it hurts. And in spite of that, above all of that, it is fun. I love to ride my bike, and I love to be around people who feel the same way I do. I love the challenge and the incredible feeling of accomplishment I get when I do something I know not everyone can do. What’s next? A 400? Not bloody likely. But that’s what I said about the 300.