The Guerciotti Project – Phase 1: Booze, Blowtorches & a Bunch of Hammering

May 18, 2013 · by CycleChick · in Bikes & Stuff, Commuting, The Guerciotti Project, Uncategorized 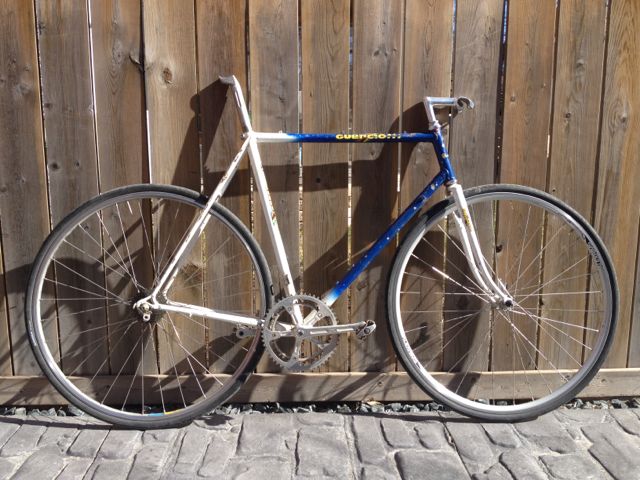 The Guerciotti has arrived! Lyle (the Big Frame) brought it in from the wilds of Altona and confirmed that this is indeed a frame worthy of a rebuild. Coincidentally, it is also a big frame, with a dead horizontal top tube that offers stand over clearance that could be described as “intimate”. There are also some worrisome dents and such, but like any bar bouncer in town will tell you, I am not easily deterred. I may just have to wear high heels when I commute.

The stem is trashed, having been pried open at some point to remove the handlebars. No matter, a new stem shall be procured. 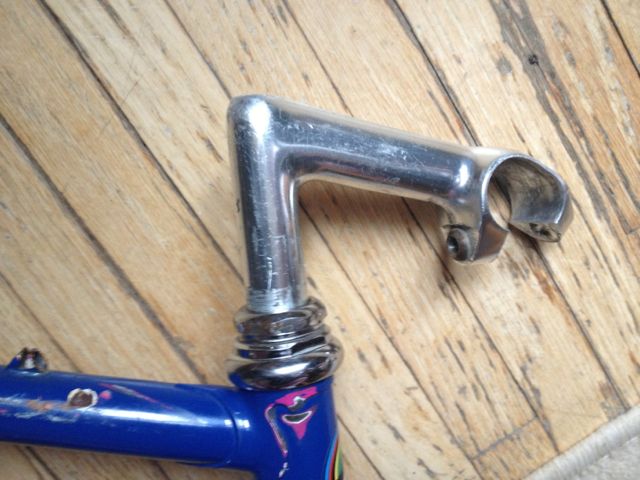 The cranks and chainrings are Gipiemmi, a Milan-based machine shop founded in 1964. Their name is the initials ‘GPM’ pronounced as a word, and according to the interwebs stands for “Gran Premio della Montagna”, the high points on mountain stages of the Giro d’Italia. I bet Sophia Loren bought her bike parts from Gipiemmi.

There is a 53-tooth ring (the bigger one) and a 42-tooth ring, which I understand is an ideal size for a single speed set up. Excellent! But the bigger ring is kind of pretty too, so it has been suggested by Hot Legs Coughlin that the teeth could be filed off and the ring used as a chain/skirt guard. I like that idea a lot, especially since high heels do look best with a skirt. 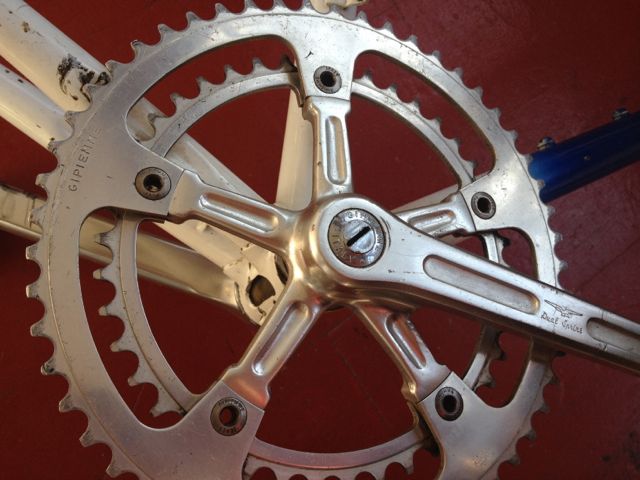 The frame has some very lovely features and nicely crafted lugs (the bits that hold the frame tubes together). Apparently these drainage cut outs on the bottom are special too. 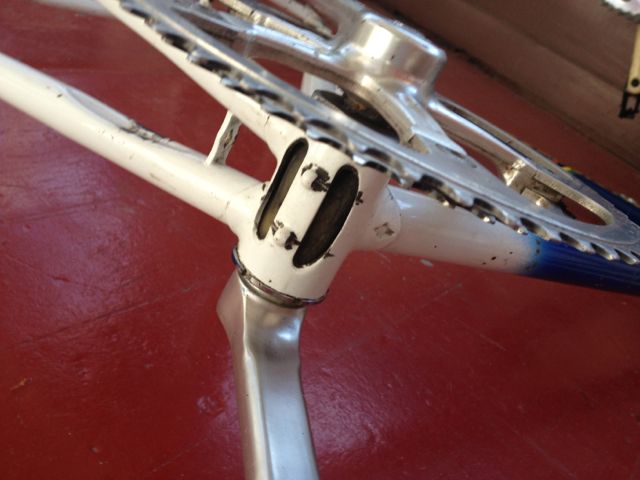 I happened to be in Olympia Cycle the other day and was introduced to one of the many Scotts that work there. This particular Scott is young, has a beard, and recently transformed an old Italian steel frame into a commuter. Let’s call him Hipster Scott. Hipster Scott took the time to talk to me about the project and gave me lots of great tips and suggested I bring the frame in to have it checked out before I do any work to it. When I proudly arrived at the shop with my Italian Stallion in tow, Tomek the Polish Bike Mechanic was decidedly nonplussed. “That’s not an Italian Stallion! That is an ugly old Italian man!” Silly Tomek. I’ll show him.

There are also lots of Adrians at the shop, and one of them checked out the frame and forks for alignment, and also tested the scary looking crack at the bottom lug by removing the bottom bracket and dripping some fluid on the crack to see if it seeped right through. No seepage was good news. Adrian also reported that the bottom bracket showed some signs of pitting, and should probably be replaced. Boo. 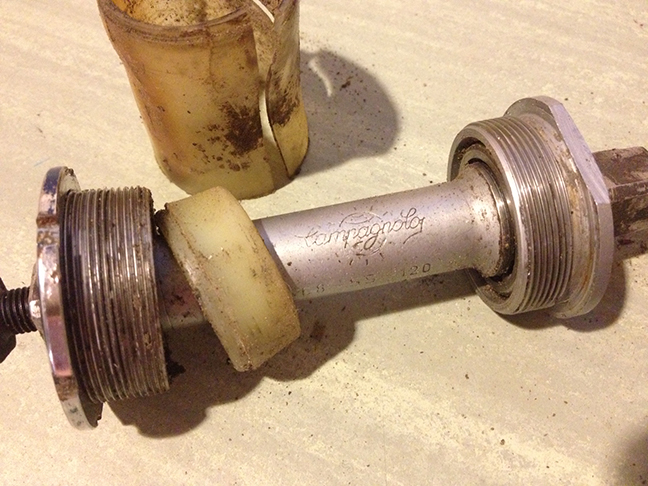 The Italians are famously difficult, and therefore made their bottom brackets different from everybody else. I will require a specially threaded Italian bottom bracket and new Campagnolo spindle – which I may have procured from The Hipster (not to be confused with Hipster Scott), who hoards old Italian bike parts in his parents’ basement along with his various cargo racks and obscure artisan beers.

The cost of diagnostic services from the shop? One case of Belgian beauties. 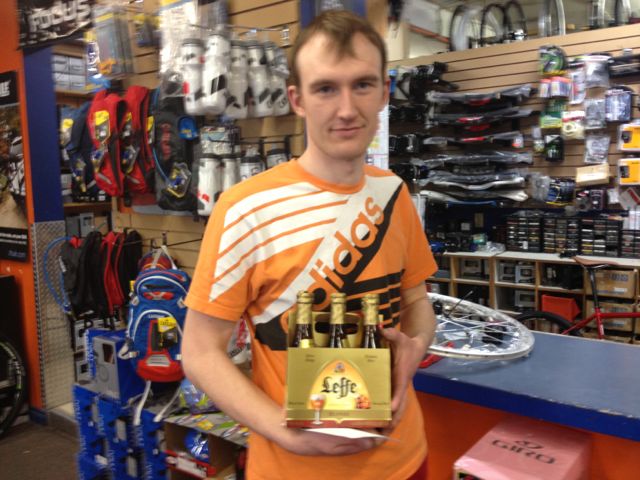 In the meantime a deal was struck with Adam for a sweet pair of lightly-used deep-v wheels. He had bought the wheels for a commuter for his lovely wife Stephanie, then the project was abandoned, along with the wheels. The cost of the wheel set: One bottle of Maker’s Mark whiskey and a case of Stella for the wife. 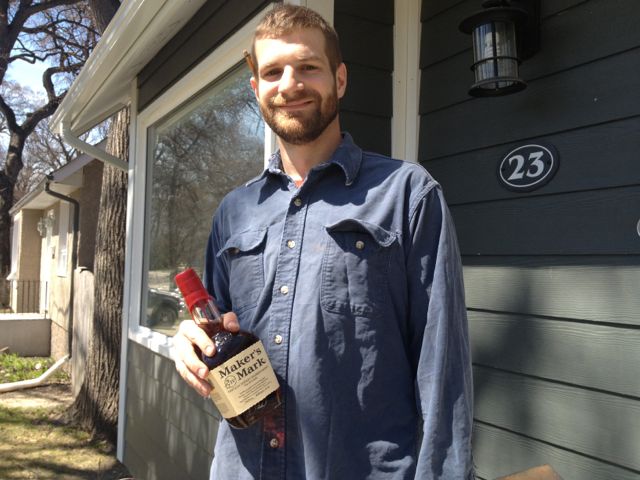 The thing about these wheels is the colour. They are blue. Like super blue. This may or may not be an issue, depending on the colour scheme I choose for the bike. More on that in a later, more “fashion-focused” post.

But it was an offer I could not refuse.

On to more important things – in order to get the frame and forks powder coated, things have to come apart. This is where I start to get in over my head and have to start learning stuff about bikes. The stem, which holds the handlebars, is attached to the forks by the headset. Or something like that. In any case, sometimes over time these things can get rusted together, or even fused, and the only way to get them apart is a hacksaw. Hacksaws and bikes are generally a bad combination. After consulting The Almighty Sheldon Brown to learn a bit about threaded headsets (as opposed to the newfangled threadless ones that are like Duplo blocks in comparison), I determined it was stuck. Headsets are stupid.

I consulted several members of my wise bike posse, including the Alter Boys and B-Rad, who suggested using a shitload of WD40 and a goodly amount of aggressive hammering. 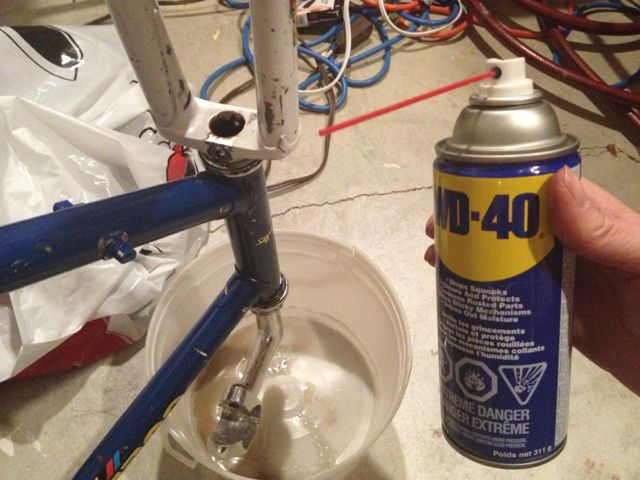 I spent the next two days pounding the hell out of the thing and smelling like garage. My efforts, in addition to being sweaty and smelly, were fruitless. B-Rad came to the rescue, offering his experience and tools to dislodge the stubborn stem. Some clamps, a trailer hitch and a 2×4 did the trick to get things loose, and a final bit of hammering secured our victory once and for all. 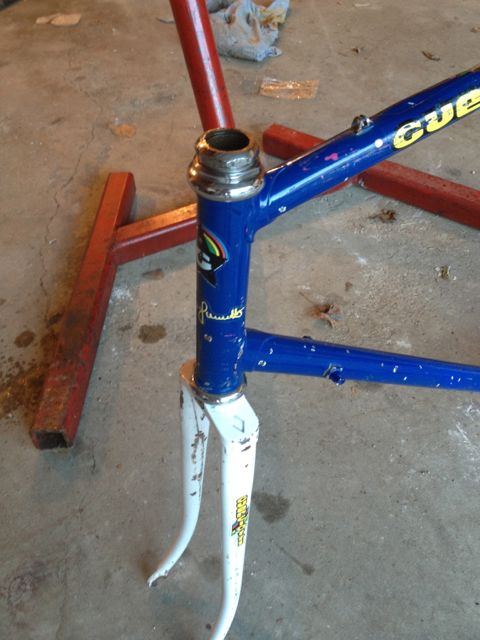 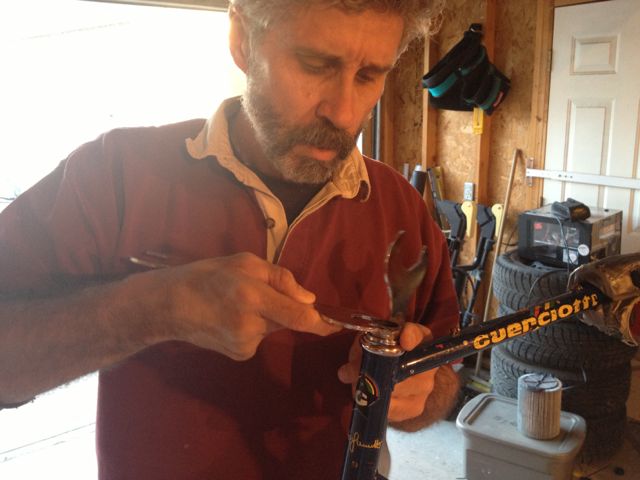 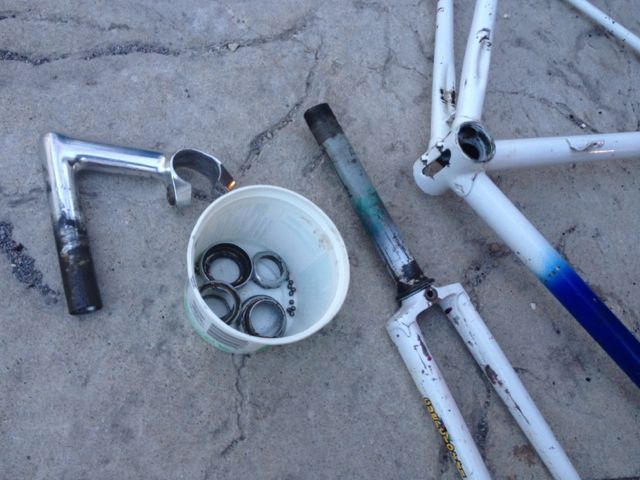 Haha! Take that you stupid bike! You are not the boss of me!

The last bit of business before powder coating was removing the front derailleur hanger, which is an unsightly little thing that will be unnecessary for a single speed set up, given that the only function of a derailleur (other than making my life miserable) is to change gears. No gears, no derailleur. No derailleur, no derailleur hanger. Buh-bye. 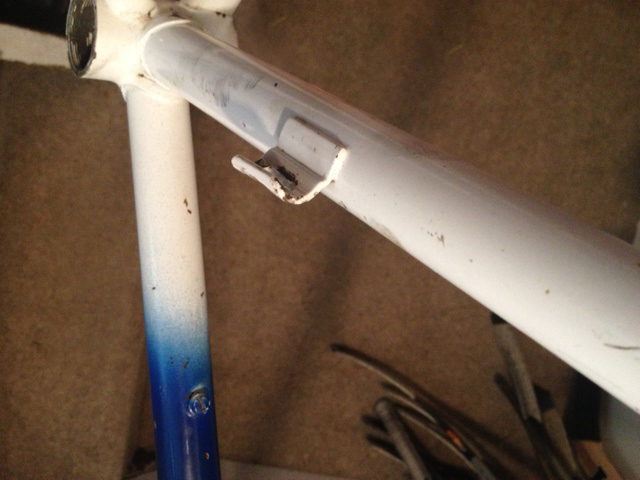 For this task, power tools would certainly be required, and nobody knows power tools like my Dear Old Dad. I brought the frame to Dad, who immediately clamped it into a vice grip for closer examination, then fired up a blow torch. 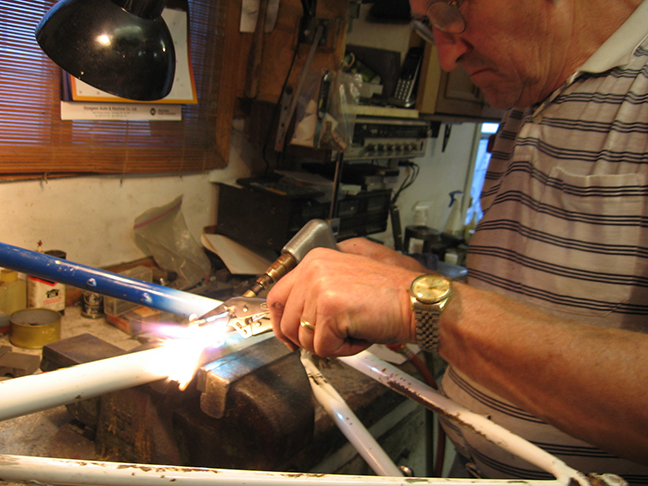 I’ll admit this was a little horrifying, but I had no reason not to place full trust in the man who raised me from infancy, having only dropped me on my head once. Or twice.

The hanger was attached by the brazing process, where brass (or copper) is melted and used like glue to stick pieces of steel together. Remelting the brass releases the bond, and also makes one unholy mess. 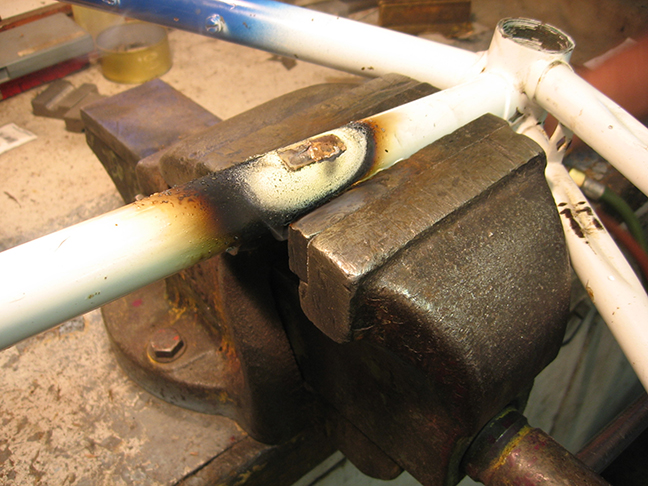 Dad tells me that although the heat would change the chemical properties of the steel, it wouldn’t wreck it, per se, which is most reassuring. Some filing and sanding and the torched area was as clean and smooth as Marco Pantani’s glorious head. 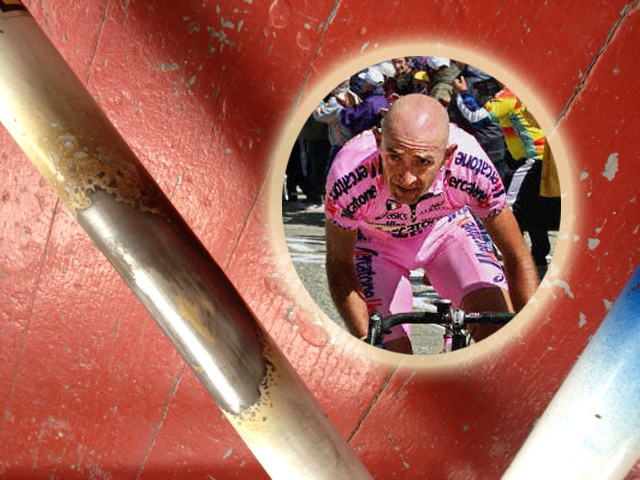 Whew. It’s been a lot of work already and the frame is in pieces and looks like hell in a handbasket. But like most things like this, it always looks worse before it looks better, and I have full confidence that this old Italian man is well on his way to his former glory.

Next step: powder coating and the rummaging of basements for the procurement of parts. Stay tuned!