With so many awesome bikey things happening on Saturday, it was really hard to decide what to do. Should I get down and dirty on the gravé with the boys and girls from the FGBC and RRR? Put on my white leather pants, pour myself a grappa and watch the first stage of the Giro d’Italia? Tour scenic southern Manitoba on a 200km Randonneur Brevet? Or pound out a stage race at FOG‘s Tour of the Whiteshell in Seven Sister Falls? 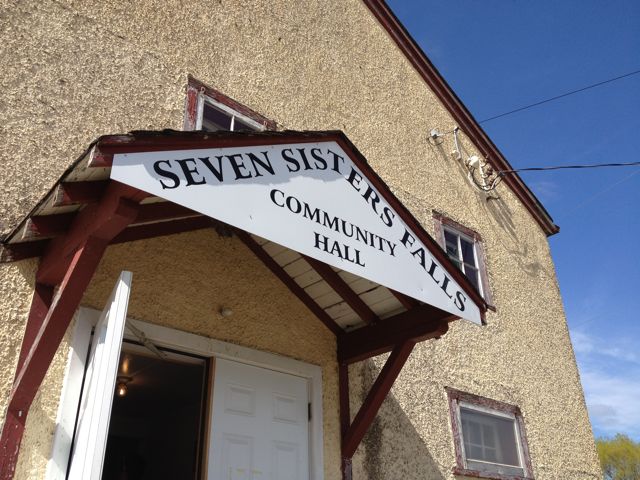 In the end, the stage race won. Partially because I’ve never done one, and partially because I don’t think the boys should ever be forced to race without at least one female butt to look at. Even if it is my 40-something mom butt.

I am happy to report there was a decided increase in the number of women in attendance. Mind you, it’s hard to fall off the floor. But perhaps I should have been more specific – when I asked for more women to come out to race with me, I didn’t mean the ridiculously fast ones.

Even though I shouldn’t, I’ll take 100% of the credit for Mel Leclaire showing up. Mel is a super strong mountain bike and cross racer who decided to give road racing a try for the first time. Welcome to the dark side Mel – try the Kool-Aide, it’s awesome. 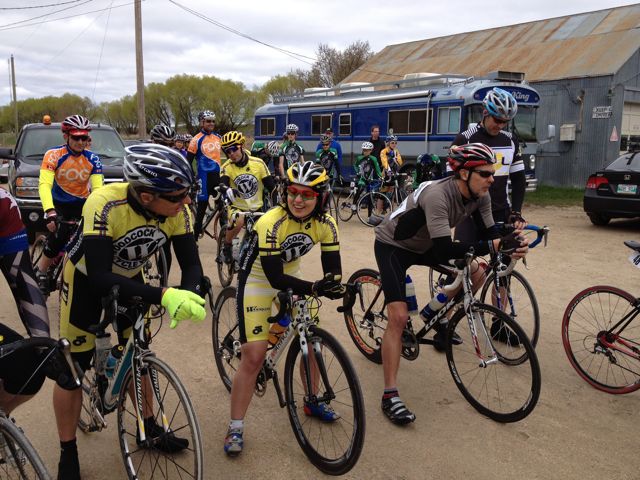 Also doing her very first road race was Val Morwood, the lovely wife of Dan “quadzilla” Morwood. If you recall, I had the pleasure of bunking with these two for a week of glorious spring riding in Arizona (we had separate rooms but did share a bathroom). Judging from the ear-to-ear grin on Val’s face after the time-trial (yes, she was SMILING…after a TIME TRIAL), she will be coming back for more. 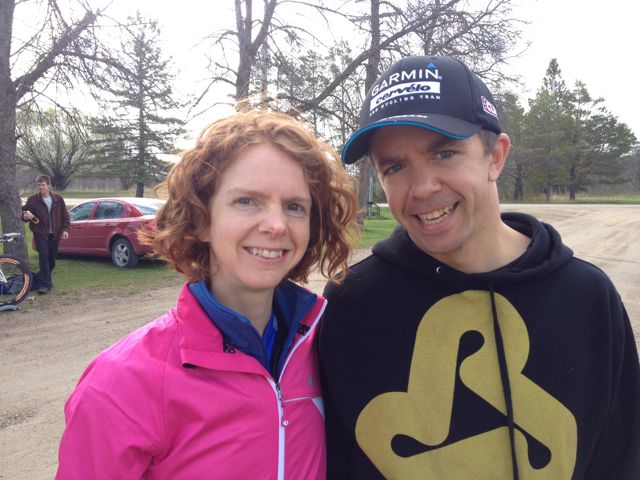 Jenna, Haley and Mary from the Provincial Team were there too. I don’t think I can call them “kids” anymore, but “women” doesn’t seem quite right either. So I think I’ll go with “blossoming weapons of mass destruction”. These girls are fast. And are going to get much, much faster. 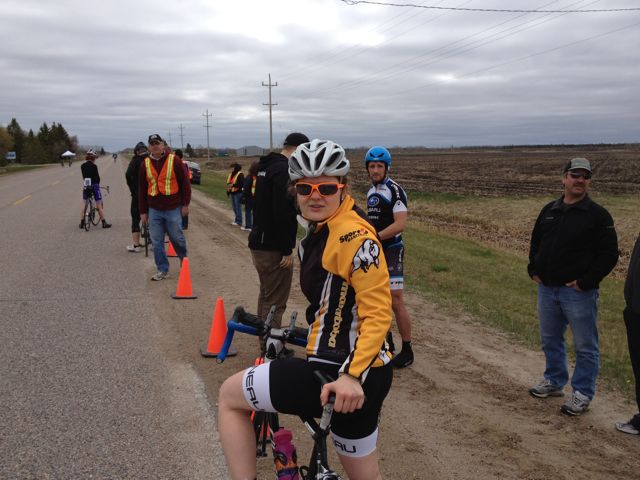 And last but not least – my powers of persuasion surprised even me when I heard that Leah Kirchmann was in the house! Holy Shit! If I had known the strength of my superpowers, I might have put out a plea for Patrick Dempsey to come and race too! Imagine what that would do for female attendance! 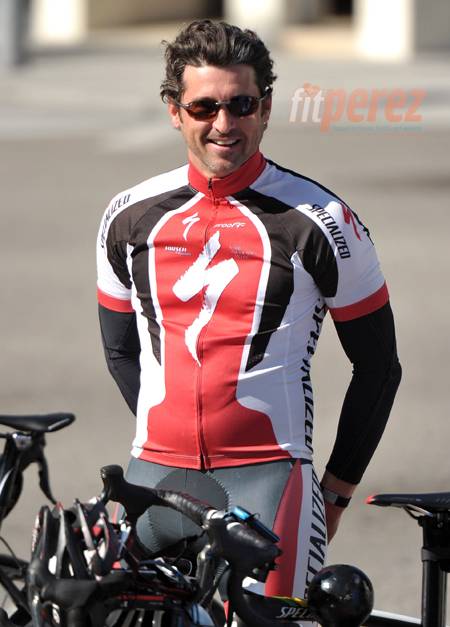 The last time I saw Leah was at our serendipitous meeting in Tucson, when I got to watch her destroy the field in the Old Pueblo Criterium. As far as bike racing goes, I am not in Leah’s universe, much less category, so thankfully it would not be my ass she would be kicking today. 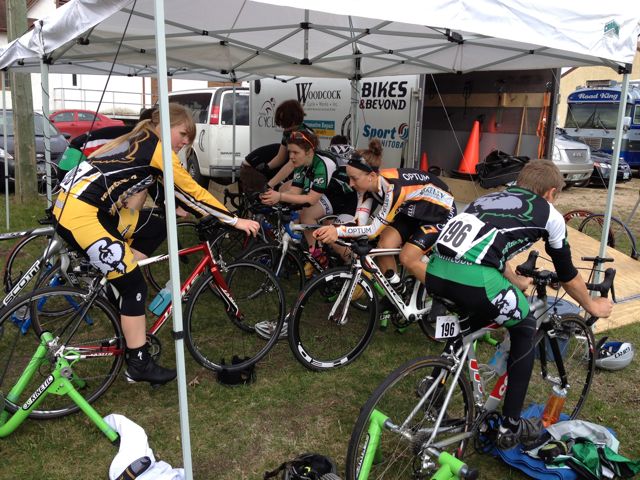 Me, Mel, Jenna, Haley, Mary, Val and Leah. Seven sisters. How about that?

The 8km prologue was as painful as it was short. When I read that it was dead flat I cried tears of joy. Sometime around kilometre four those tears turned into dry heaves. While not the speediest time trial, I did manage to push pretty hard without any of the unpleasant cramping I had at my last race. But I wondered how unpleasant that effort would make the road race coming all too soon after.

We had a group of about sixteen riders in the road race, a mix of people from all the different clubs. The Woodcock team was out in full force, complete with the awesome Big Blue Bus. Tim looked at his wit’s end as he described the mechanical bugs they were still ironing out. I’m guessing bikes are much simpler to fix than buses. 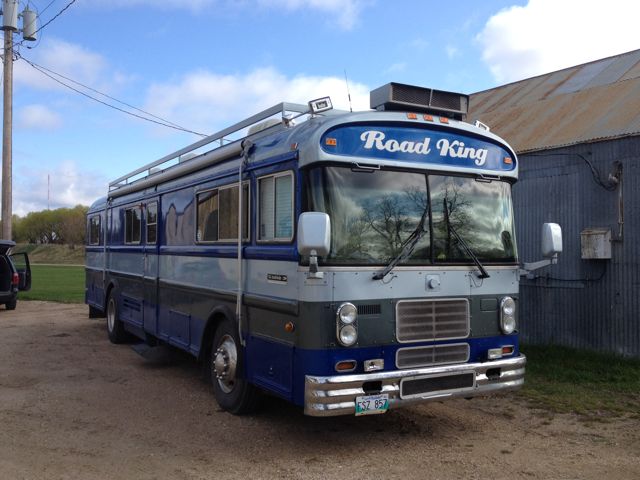 I love that the bus says “Road King”. But I think it needs a rad yellow and black Woodcock paint job, just like Bill here. 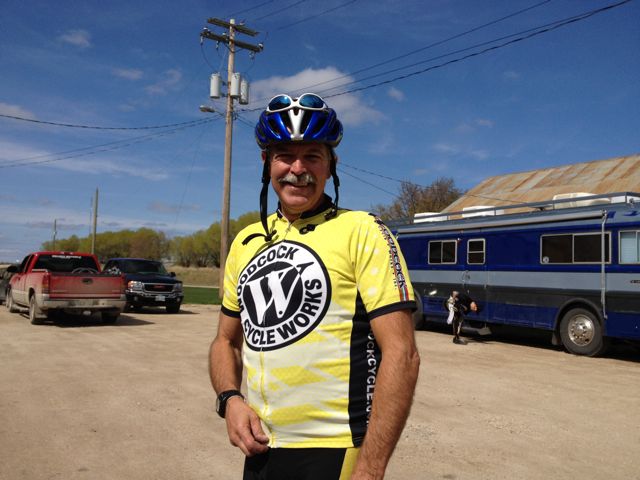 It was nice to hobnob with everyone between the races, as they swapped their aero bikes, bars, helmets and wheels for slightly more modest – and less spacey-looking – road race equipment and attire. 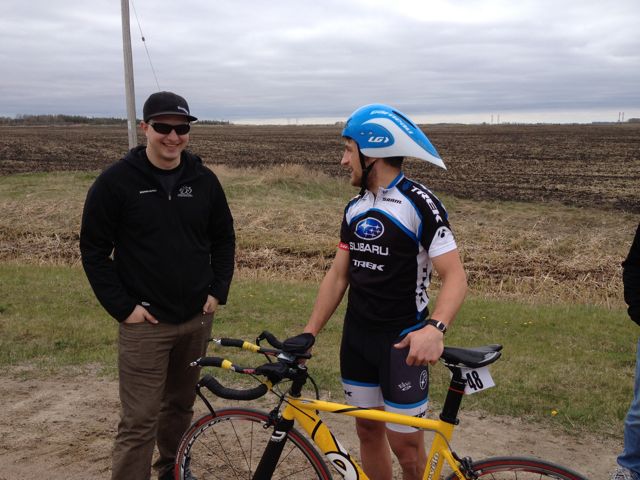 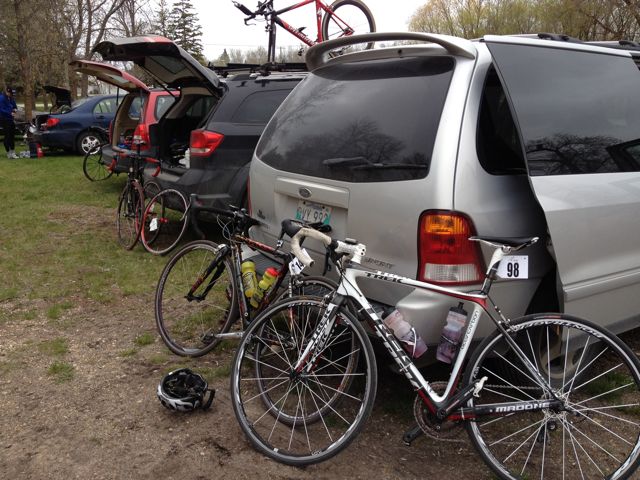 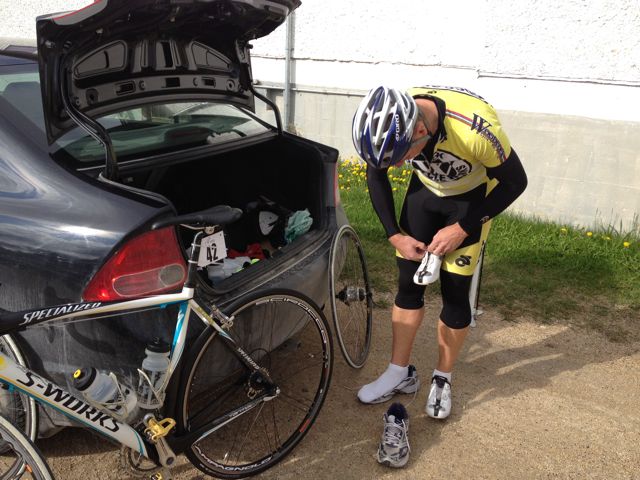 The road race was great – not nearly as heinous as I was expecting. A nice flat 65km made up of three out-and-back loops with a head wind out and tail wind to the finish. I got a bit blocked in when the final break went about 2km from the finish, and managed to almost bridge up to the group when I ran out of road. Oh well – each race is different, and each race I discover a new and exciting way to screw up. This year I am really focussed on learning to be a better, smarter racer. Better looking and younger as well.

Gary and the FOG folks put on a top-notch bike race as usual. The officials and volunteers (who were almost as plentiful as racers) were absolutely fantastic! Big sweaty bear hugs to everyone! 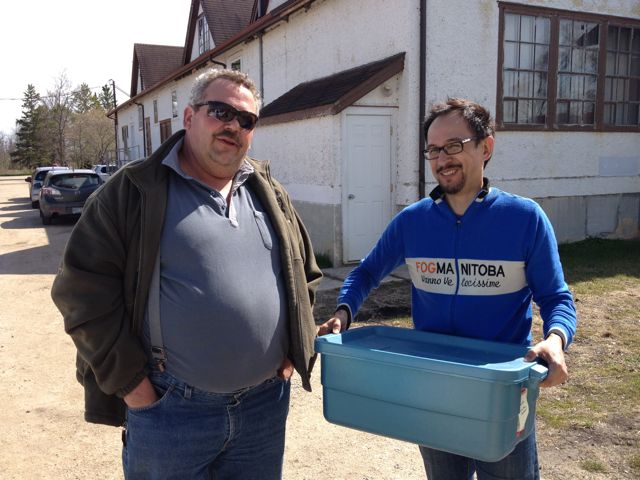 A big congratulations to my good buddy Ben, who won the cat 4 road race in a big sprint finish with even bigger Scott from Brandon – which, as Scott reminded me, is not at all the same as Portage la Prairie. 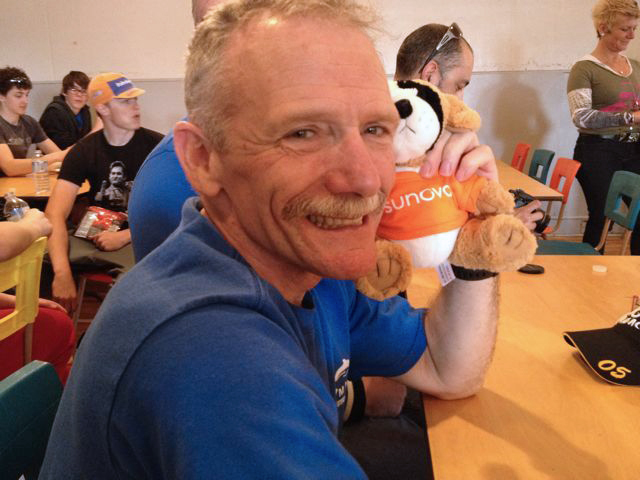 Yay Ben! I managed to win back my race entry fee plus an extra five bucks to spend on beer. Yay me!! 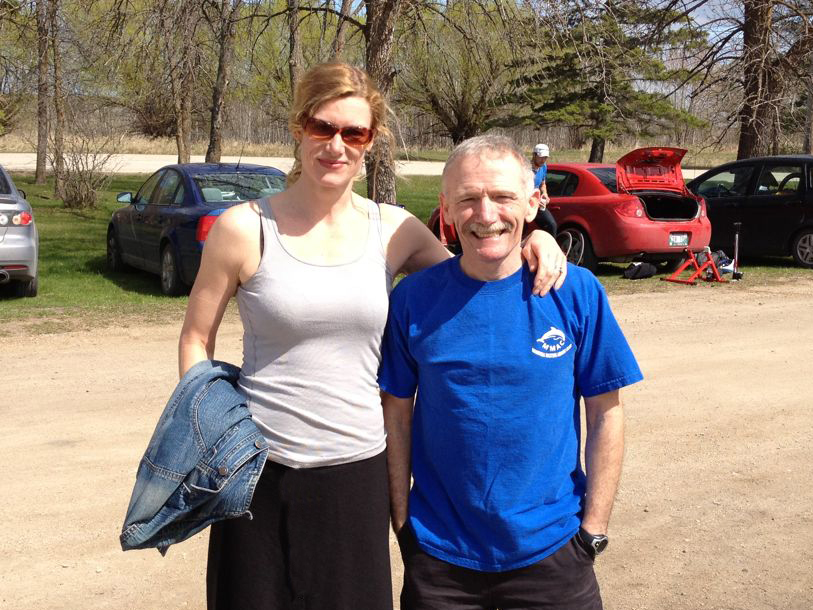 Not a bad day at all. Even without Patrick Dempsey. (call me)