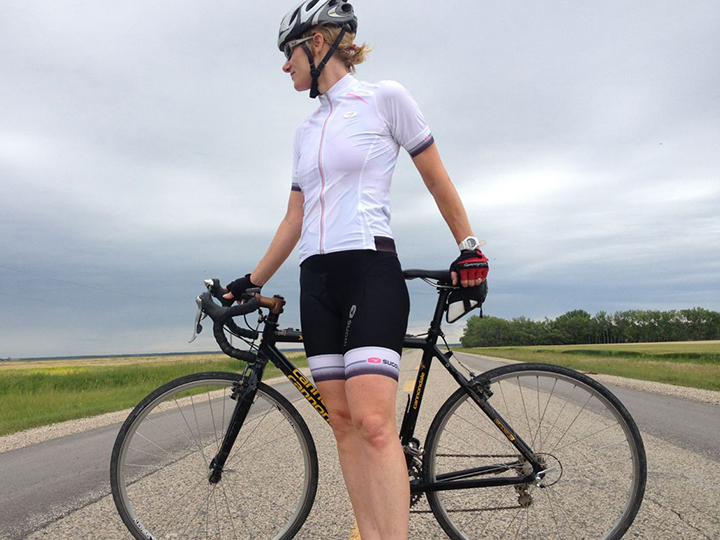 Being an international blogging sensation means I get all sorts of free stuff. And by free stuff I mean eye strain and parking tickets. But every so often I do get for real awesome stuff and I am happy to let you know what I think of it. Since they aren’t worth anything, I’m not paid for my opinions, so I promise to give you the straight goods. After all, if you’re unhappy, I’m unhappy. And if you look stupid, I look stupid. That’s just the way this thing works.

If you have stuff you would like me to review, let me know. Especially if it’s a size 54 carbon fibre cyclocross race bike. Or bourbon. If I don’t like it, I will let you know privately, and gently, and let you know why. I may even rock you slowly until you feel better. If I haven’t written about something you’ve sent me yet, don’t worry, chances are I am out somewhere doing power intervals in preparation for cross season. Or sleeping off the bourbon.

I recently designed the event jersey for the Habitat for Humanity Ride Around the Lake and was put in touch with the local rep for Sugoi, who is making the kit. Nick came down to the office and in the course of our meeting, asked if I would be willing to try out some Sugoi cycling product (apparently they do not make bourbon) and let them (and you) know what I think. I happily agreed. He said he would send me their top-of-the line RSE cycling kit and would send me a size chart.

After Nick left, I sent him a rather awkward email to set something straight:

Thanks for the opportunity to test out the Sugoi product. Very exciting!

I don’t want to sound picky or ungrateful, but I should mention that I am not a fan of pink. I refuse to wear it on the bike. Same with purple, flowers, butterflies, or anything else that has no business on cycling gear.

A day or so passed and I started to worry I had offended him. Finally I received his response:

So I should cancel the order for the jersey with the purple butterfly flying next to a unicorn with a rainbow over a field of pink roses?

Have an excellent night,
Nick

When the Sugoi package arrived I was away on holidays. The guys at the office were very excited and sent me an email telling me the stuff felt great and promised they would try not to stretch out the bib shorts too bad. Jerks. 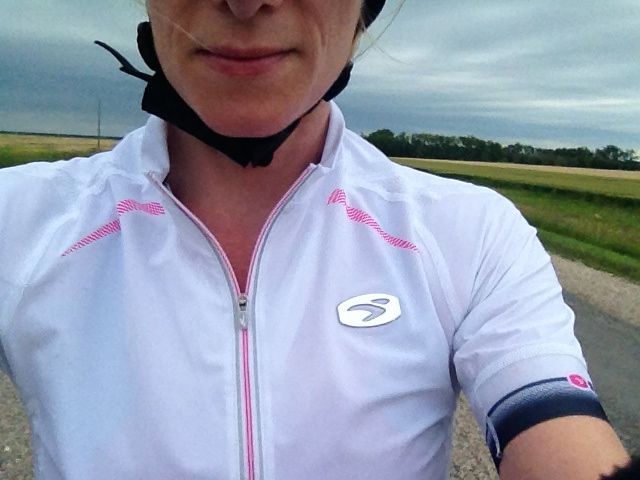 The look and feel of the jersey was impressive. It feels almost like nylon – smooth and cool, with a more breathable mesh fabric on the back panel and under the arms. There is a nice wide grippy band around the arms – which I might add are a nice length, not those dumb little short “cap sleeves” that you see sometimes that look stupid and totally wreck your pro tan lines. There are THREE pockets, plus an extra zipped one for added storage.

I like the full zip because I hate fucking around with pulling tight clothes over my head, especially when I forget to take my helmet off first. I also like that the jersey is long enough that I don’t look like Brittany Spears in a tummy-baring pop-top. The RSE is a “pro-fit” jersey (garment industry code for “skin-tight”), and therefore not for the faint of heart. There is nowhere to hide in this little number, especially since it’s white – but if you can swing it, you’ll feel and look like a superhero.

Speaking of colour – Nick was a bit embarrassed because the only colour option on the ladies’ RSE jersey is white with pink accents – an odd decision on Sugoi’s part, since it is by far the most performance-focussed jersey they make, and in my experience (though far from comprehensive) many women who race or ride more seriously are less likely to want pink on their kit. Nick tells me they are working on other options. Good call.

There is nothing more pro than white, and when I wear it I do admit to feeling 1% closer to the golden pro standard we all aspire to. It is, however, quite sheer, so you should exercise extreme caution with your selection of underthings. Especially if it happens to rain unexpectedly, like it did the first time I wore my sexy new pro kit on a ride. 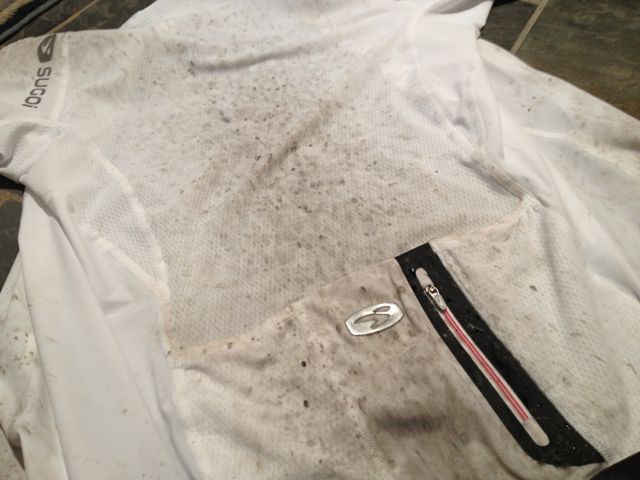 As soon as I got home I doused everything with spray Shout, wondering how I was going to break the news to Nick that I had destroyed the kit on it’s maiden voyage. But to my amazement, it came out as white it had been when I received it.

That might sound a little sales-pitchy, but believe me, I’ve had plenty of jerseys covered with road juice that are forever scarred with those telltale grey stains that just never seem to come clean.

Overall, I love this jersey. The fit, the feel, and the look – even with those little hits of pink, which make me a little crabby, but are actually subtle enough to ignore. If they offered more colour options, that would be rad.

I have a love/hate relationship with bib shorts. While they don’t creep down or bunch like some regular shorts do, they can be problematic on longer rides when roadside nature breaks in mixed company are required.

Bib shorts are different from regular shorts in that they include straps that go over the shoulders like those old wrestling outfits. Something like this: 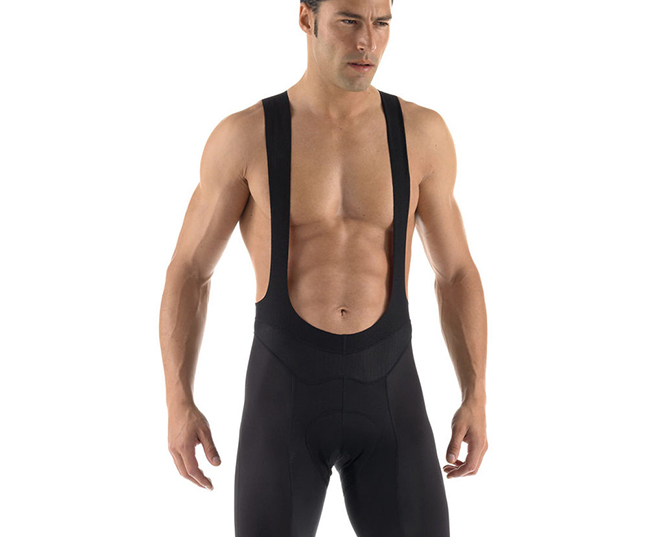 Thank you Tony, that will be all.

The manufacturers have struggled with bibs for women, both in terms of accommodating nature breaks, as well as those pesky lumps we have on our chests. European manufacturers like Assos and Santini have dealt with the latter issue like this: 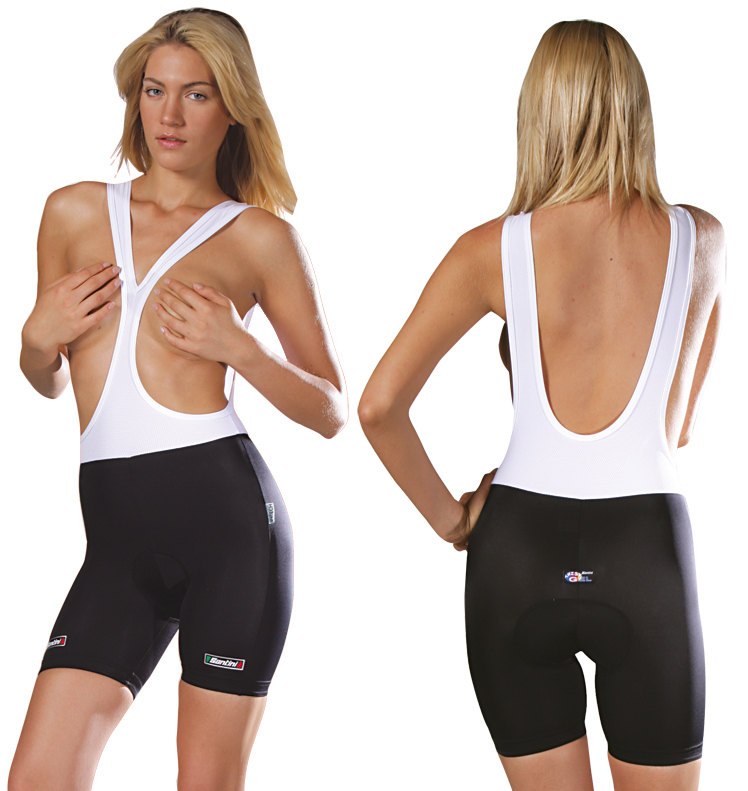 I’m not sure how many of these bibs they actually sell, but when I Googled images of bib shorts, this image was number one. I guess lots of women are checking out bib shorts online.

The RSE bibs I received have normal, non-Euro trash suspenders that criss-cross in the back, for a snug fit that doesn’t slip off the shoulders when you ride, or when you dance around the house to embarrass your spouse and/or children.

The chamois in the shorts is quite comfortable – not like some others that make you feel like you’re sitting on a sock monkey. There is a glorious absence of “bits pinching”, something that can make even a short ride absolute misery. A plushy fabric, lots of spacey fabrics and venting make this a really comfortable ride – although I’m not sure how it would fare on a longer ride. But considering the aforementioned trouble with bibs and nature breaks, that won’t be an issue.

Speaking of that, Nick tells me they have developed a new women’s bib that may revolutionize the nature break issue. He wasn’t able to get me a sample, but as soon as he does I’ll be sure to let you know how it goes in embarrassingly graphic detail.

The fabric of the bibs is pretty awesome, and includes 75% polyamide, whatever the hell that is. But it is silky and slides over the sides of my saddle like a dream when I ride. It may sound like a small thing, but there is a noticeable absence of friction. Friction makes heat. Heat makes you sweat. Friction plus moisture equals chaffing. Chaffing equals misery. It’s all simple science my friends.

Lastly, you’ll notice the nice wide grip band at the bottom of the shorts. Why it took people so long to do this boggles the mind. More comfort and less sausage is a no-brainer.

Thanks to Nick and Sugoi for letting me test their great product. It was pretty fun and I really do love this kit almost enough to sleep in it. I’m excited to see what else Sugoi has coming down the pipes, but in the meantime I will continue to enjoy the hell out of my pink rainbow unicorn kit.