At the risk of sounding like a hillbilly (or Appalachian American for the political correctiles among us), I had more fun at Dark Cross than a twister in a trailer park. If nothing else, it confirmed my unabashed love of bike racing, the unquestionable awesomeness of my bike club, an the undeniable brilliance of unbridled chaos.

After several years of watching the cyclocross season from the sidelines, it was glorious to finally be back in the saddle again – pain-free (mostly) and equipped with a pretty ass-kicking rig. My Focus CX Mares made its racing debut, fully pimped out with some sweet wheels from my lawsuit-dodging friends at Café Roubaix*. Together, we would embrace our inner redneck and kick-off the season with a big, fiery, propane and diesel fuelled bang. 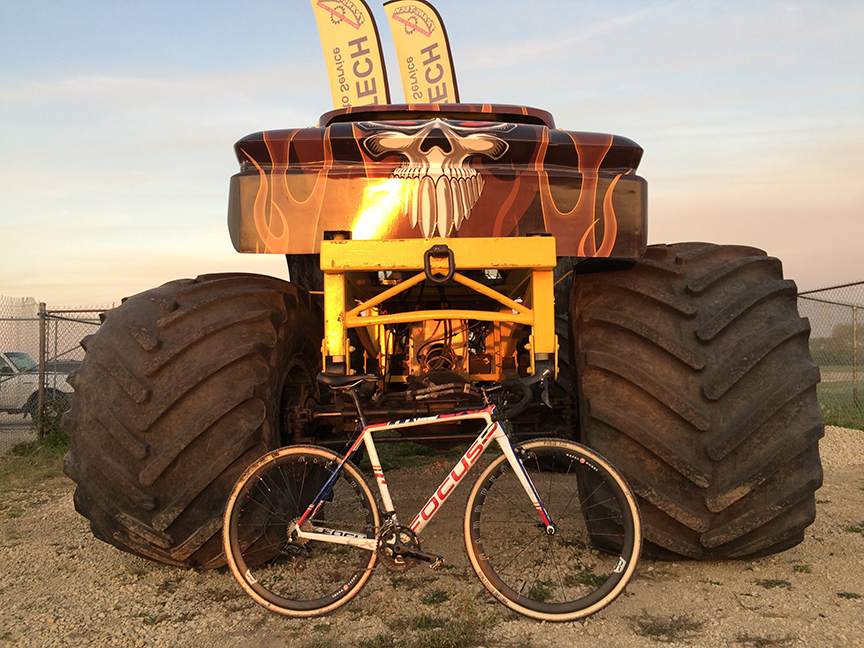 How I fell into Dark Red Racing is a long story, but as far as stories go, it has a pretty happy ending. In addition to being the perfect balance of hard core racing and party, the DRR philosophy (if it had one) would be that there is nothing too big, too dangerous, or too weird. 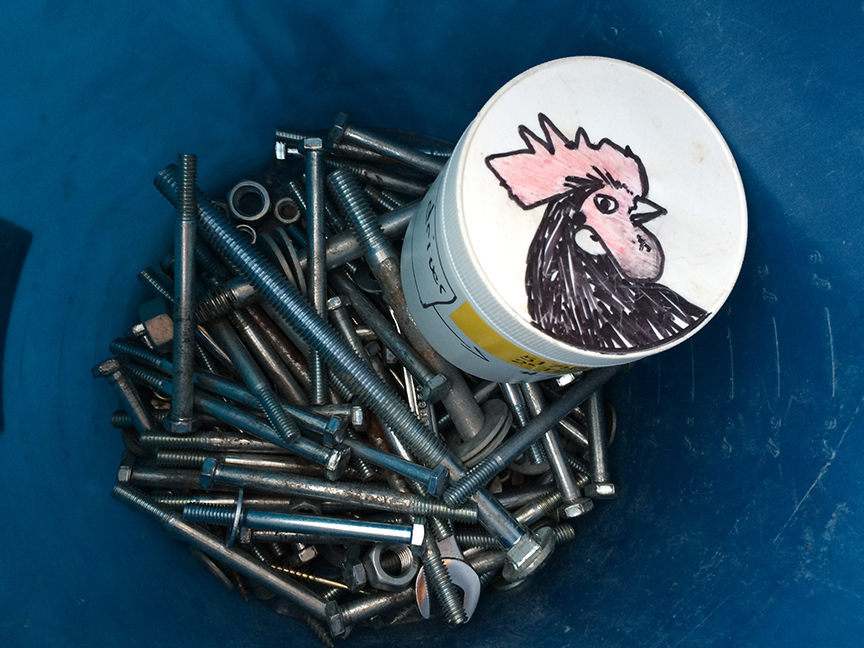 This year’s weirdness manifested itself in flaming barriers – an idea that had been floated about for a while, and was usually met with outward enthusiasm and inward terror. Fuelled by the Dark Lord’s powers of persuasion, and ignited by the artisanal skills of our very own Giant, the barriers of fire were not only miraculously approved by our benevolently awesome commissairs, but functioned exactly as planned in spite of the prevailing gale-force prairie winds. I am pleased to report there were no major mishaps – even Olli’s bike escaped unscathed after several rather tense moments on the grill.

The highlight of the evening came when hot shot Ari Robinson showed off his radical bike skills, which subsequently broke the internet when Justin Lee shared this little tidbit of video gold.

I don’t know about you, but I pee my pants a little every time I watch that. Shortly after this little stunt, Ari bunny hopped the entire 16 step run-up. In your face, MacAskill. Speaking with him after the race, he seemed a little concerned about what he could do next year to top these crowd-pleasing antics. I didn’t have any ideas offer, but I’ll bet Cirque du Soleil might.

Setting up the race is always the best medicine for pre-race jitters. Brother Blair, our host and manager of the Red River Co-Op Speedway, takes exceptional care of us, especially considering we are not his typical clientele. 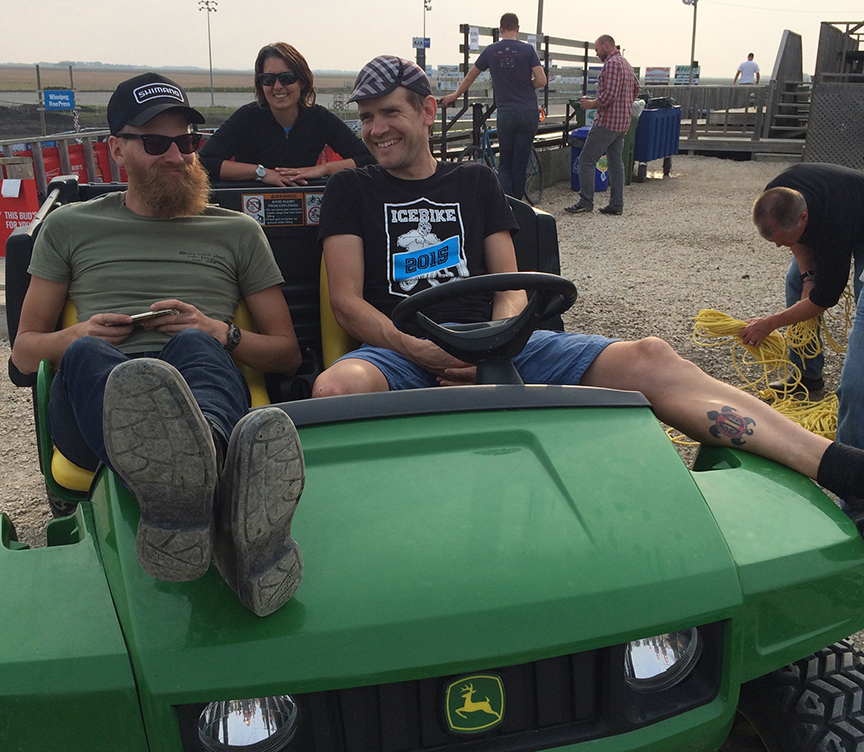 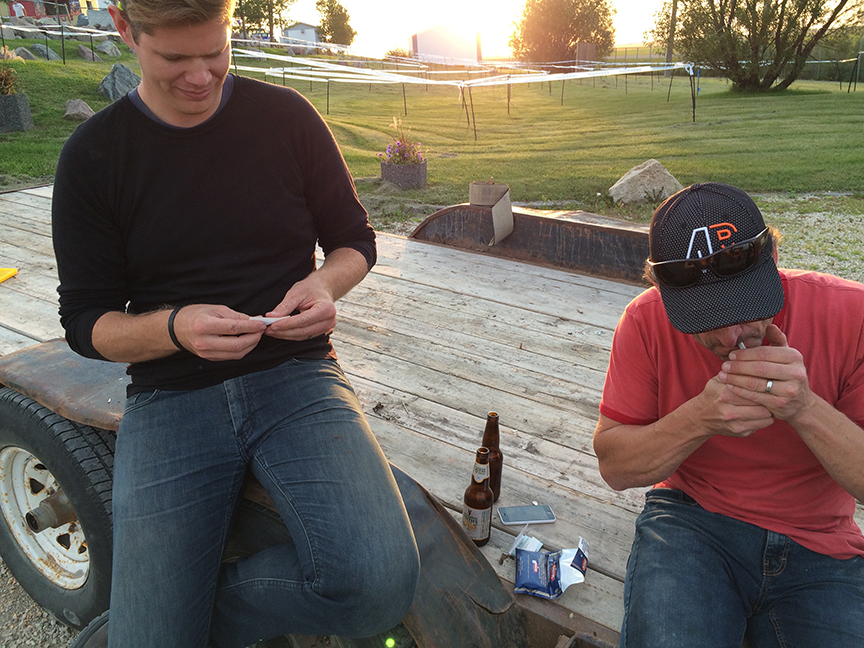 We enjoyed an amazing night of racing – in spite of the fact that we all got our asses handed to us by people not old enough to drink or vote. But not to worry, we were far too proud to be humiliated for long. 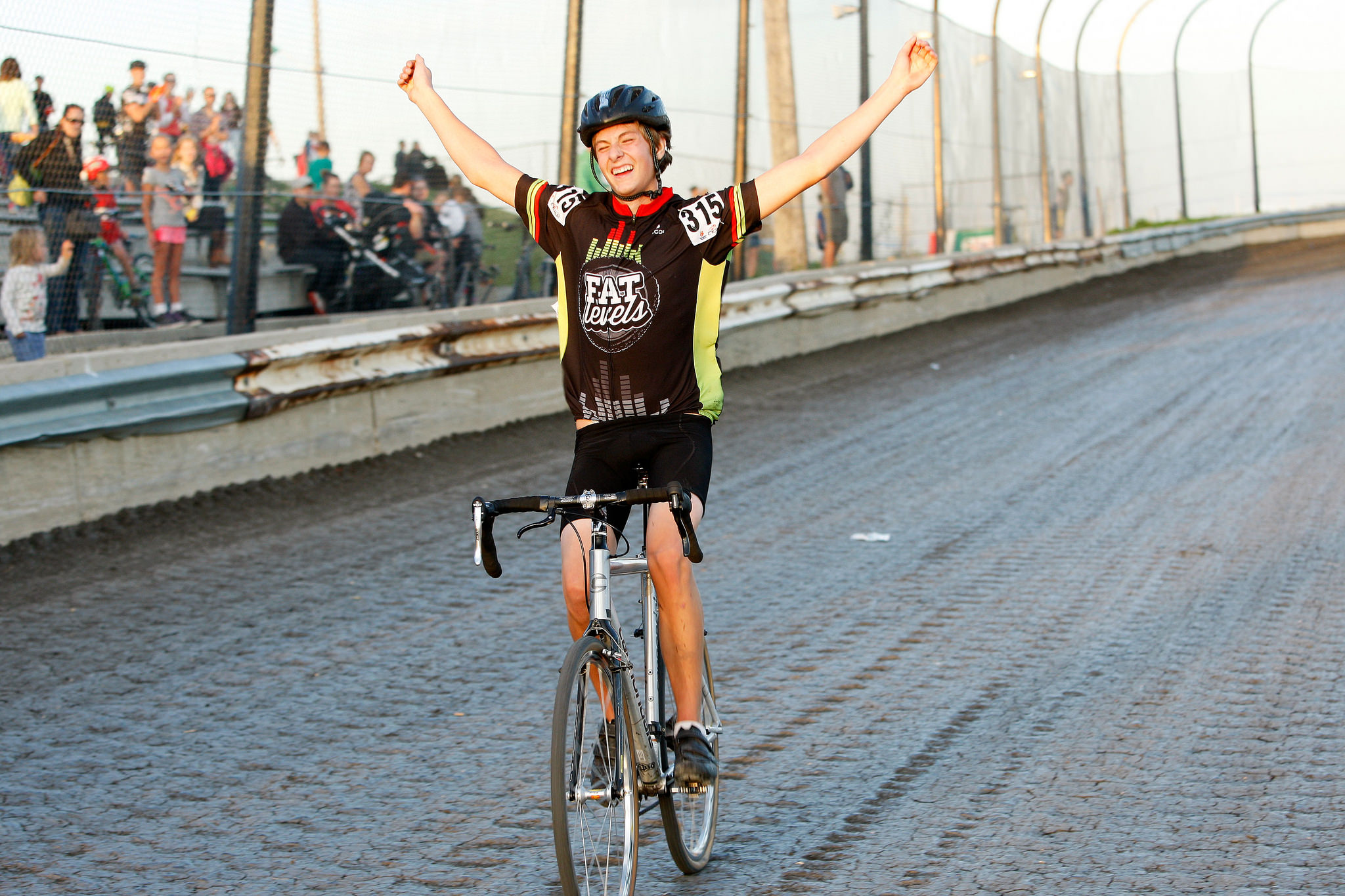 Teagan Algeo (aka The Happiest Kid in the World) kills the C race. Photo by Justin Lee. 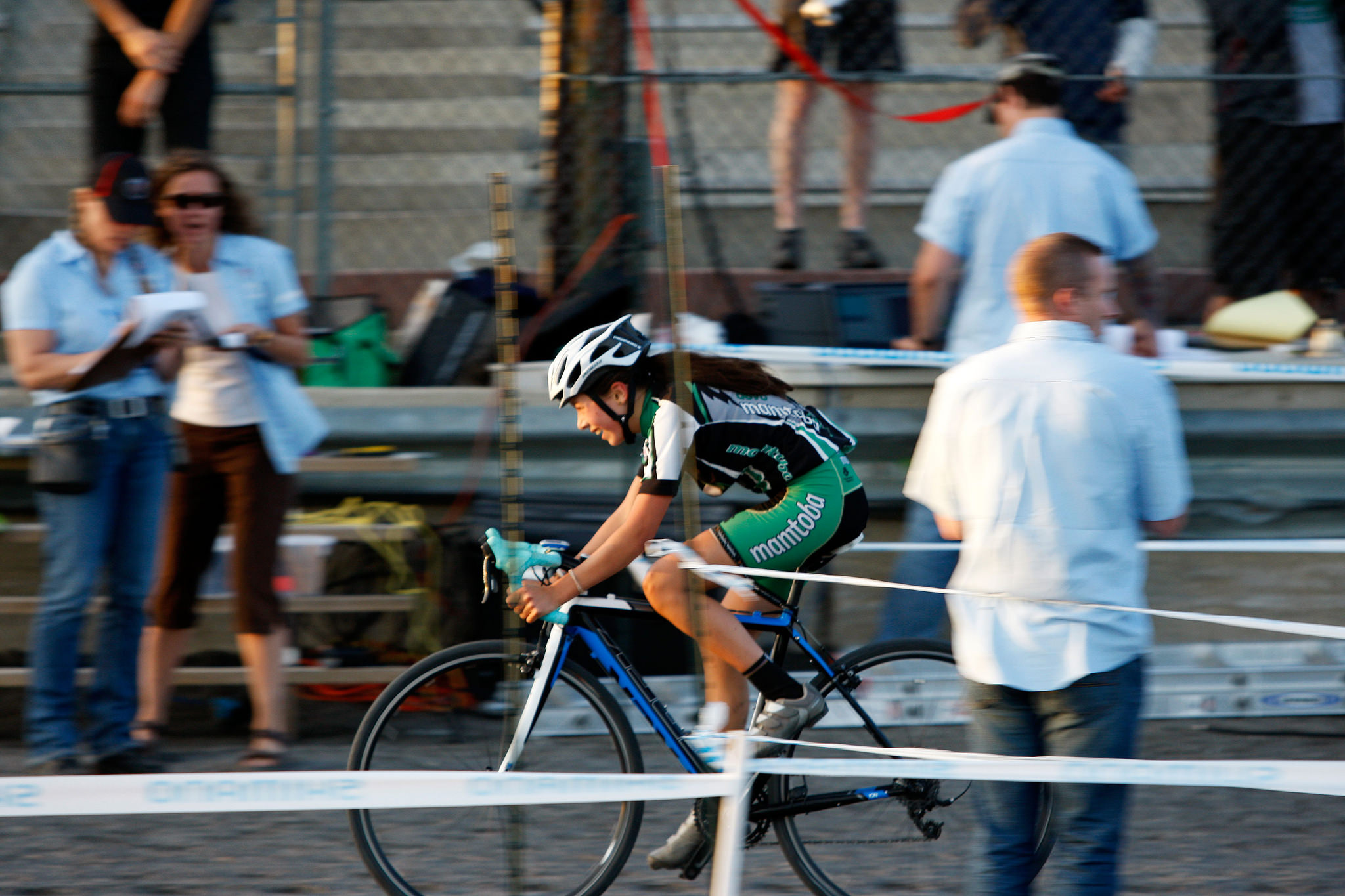 Another highlight of the night was watching team mates Oliver Evans and Danick Vandale work together to win the A race. After an amazingly effortless-looking effort, Olli won it in a sprint, finally breaking the curse of DarkCross. After suffering mechanicals of one sort or another for every single year the race has occurred, it was nice to finally see him ride across the line smiling, as opposed to running across with his bike in pieces. 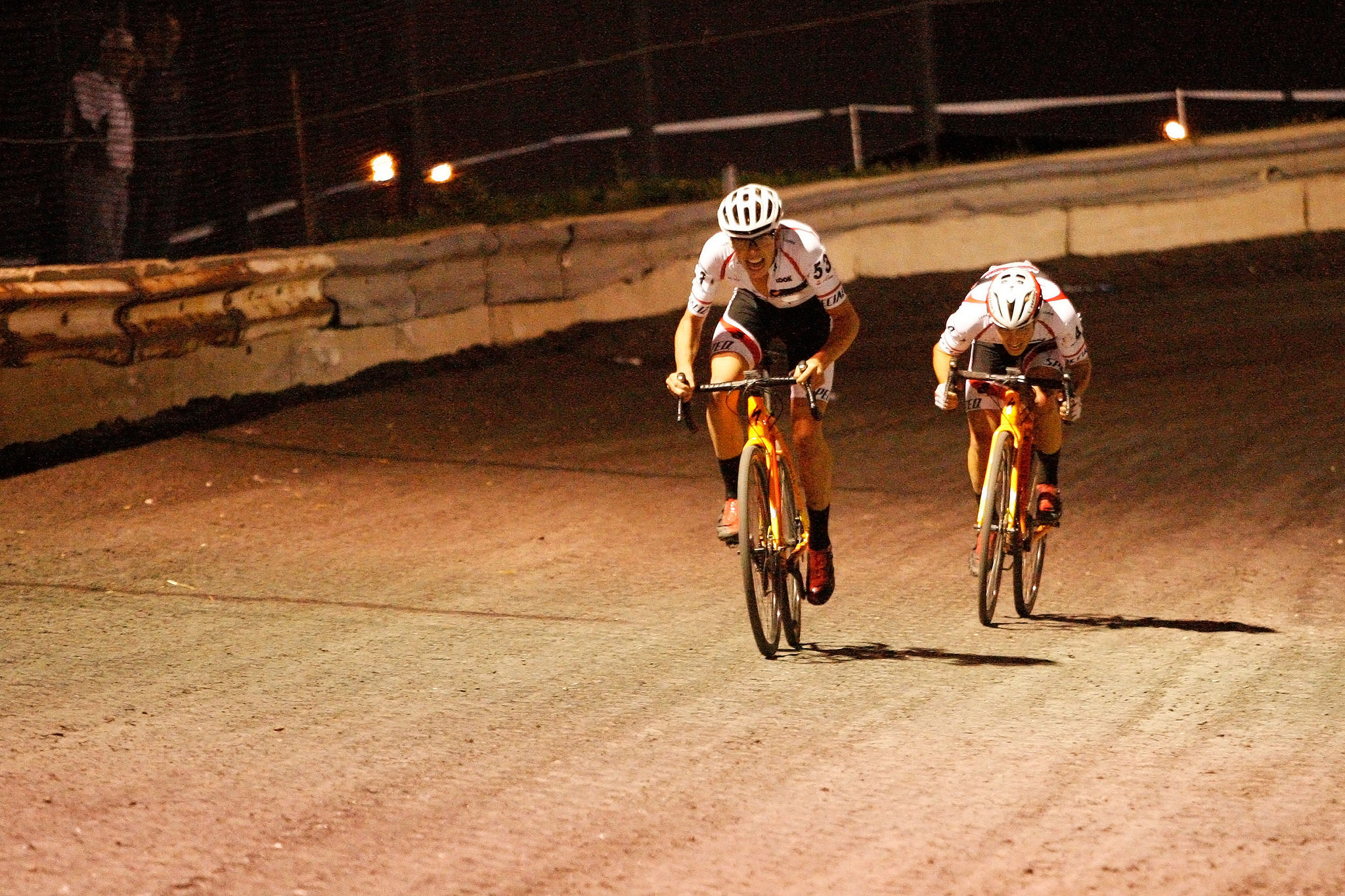 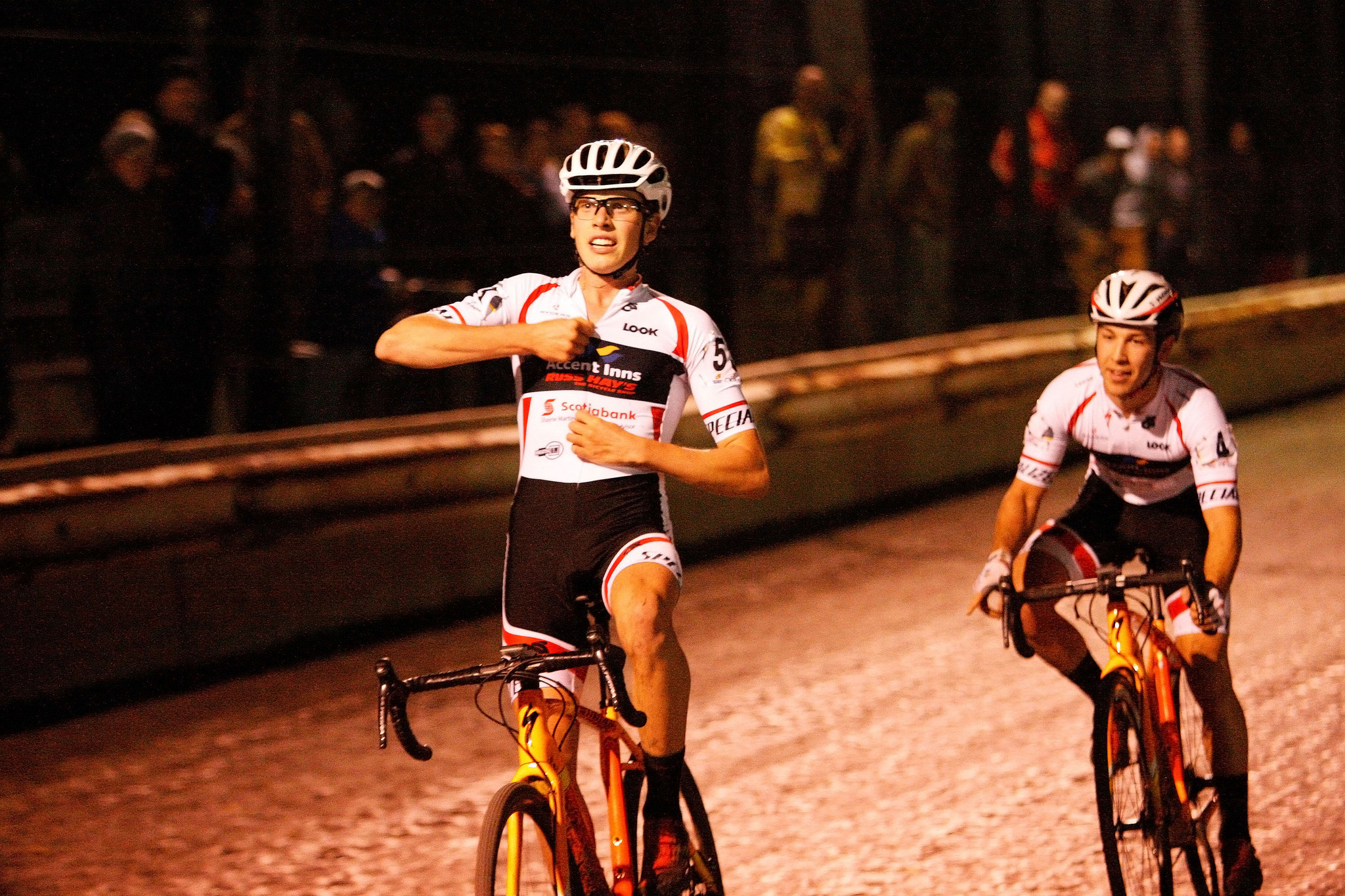 That, my friends, is classy bike racing at its finest. Well done, gentlemen.

The course was (in my fragile roadie opinion) a bit more technical than in previous years, and included some added ‘fun’ inside the track, courtesy of a Monster Truck Jam that had happened late in the race season. Knowing our penchant for the weird and wonderful, Brother Blair informed us of the dirt jumps left in the infield and asked if we wanted to use them for our race. Needless to say, we gratefully accepted his offer. 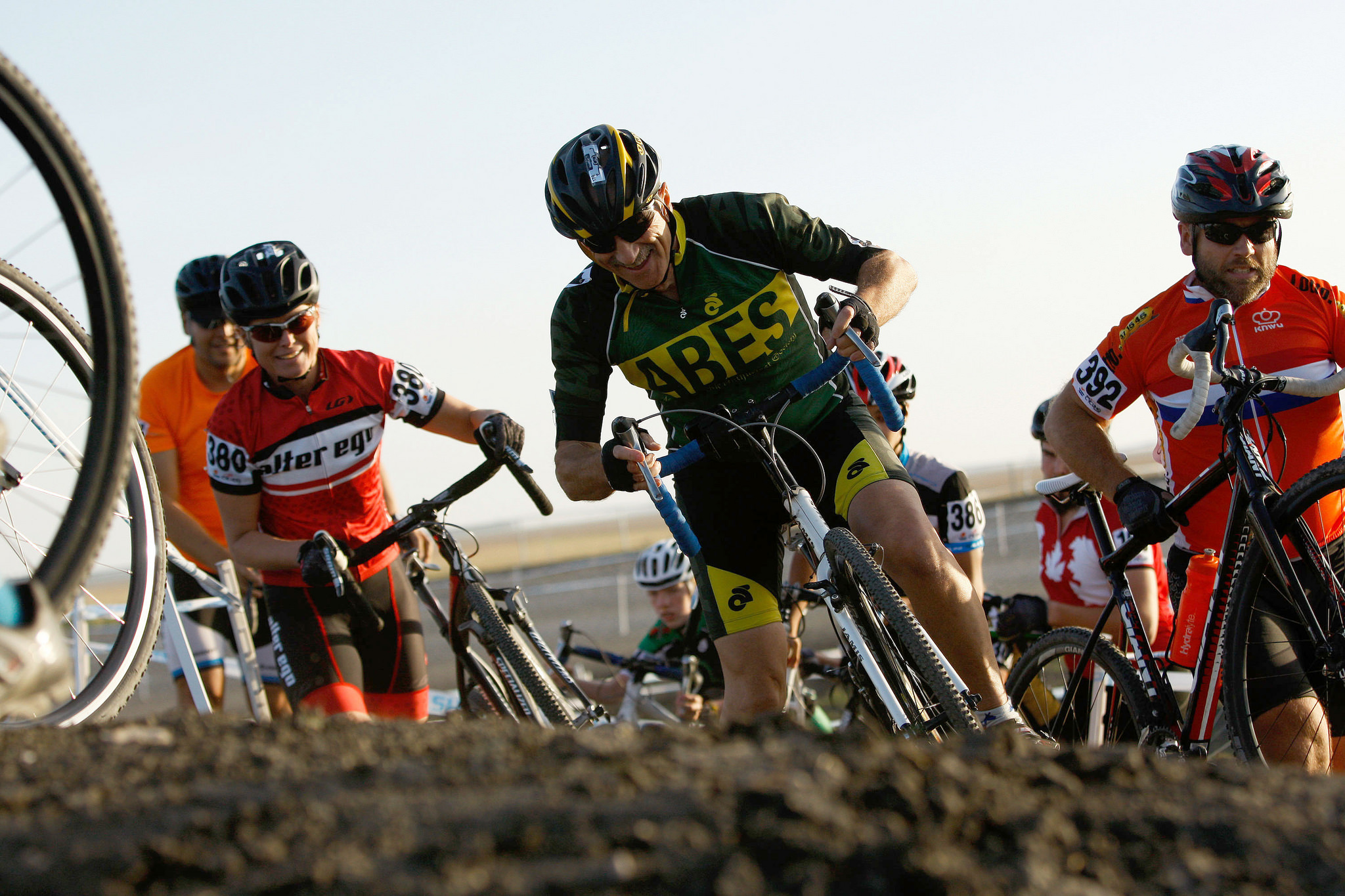 Of course it wouldn’t be DarkCross without the Wallace and Wallace Grand Stand Run Up. Always a crowd favourite, it’s the perfect chance to get up close and personal with your favourite racer to remind them they are being beaten by a twelve year-old. 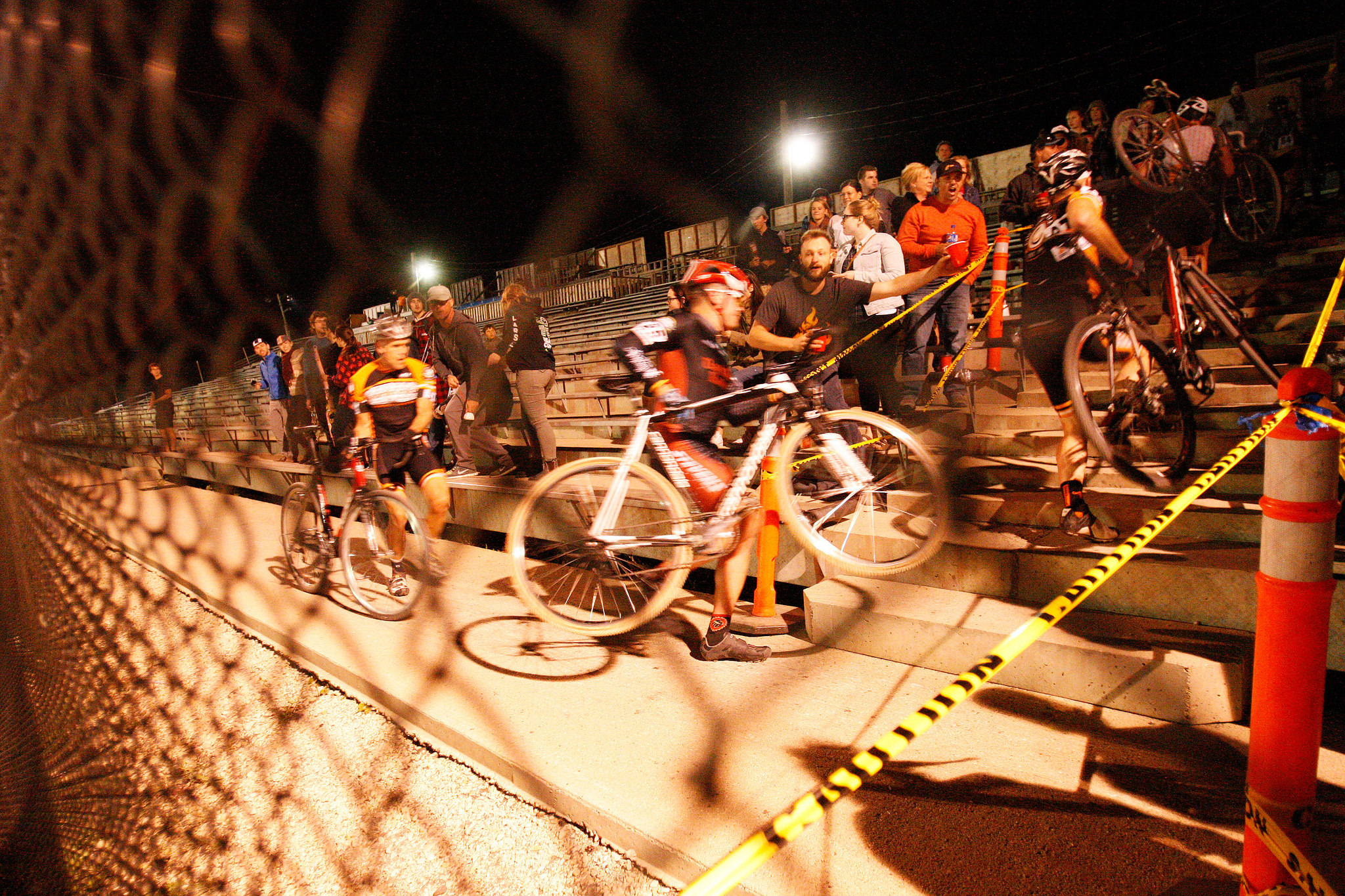 Running on the stairs, in the dark, with beer. What could possibly go wrong? Photo by Justin Lee.

DarkCross was (and always is) great way to start the cyclocross season in Manitoba. Certainly better than all the bush whacking and tree crashing I’ve been doing trying to learn how to ride my bike in something other than a straight line. Trees are way meaner than they look. With the second and final year of the Shimano Canadian Cyclocross Championships here in Winnipeg later in October, it’s bound to be a season we’ll talk about for a very long time.

And so we look forward to MennoCross this Saturday at CMU. Maybe this time I’ll wait for the post-race nausea to subside and enjoy the faspa. 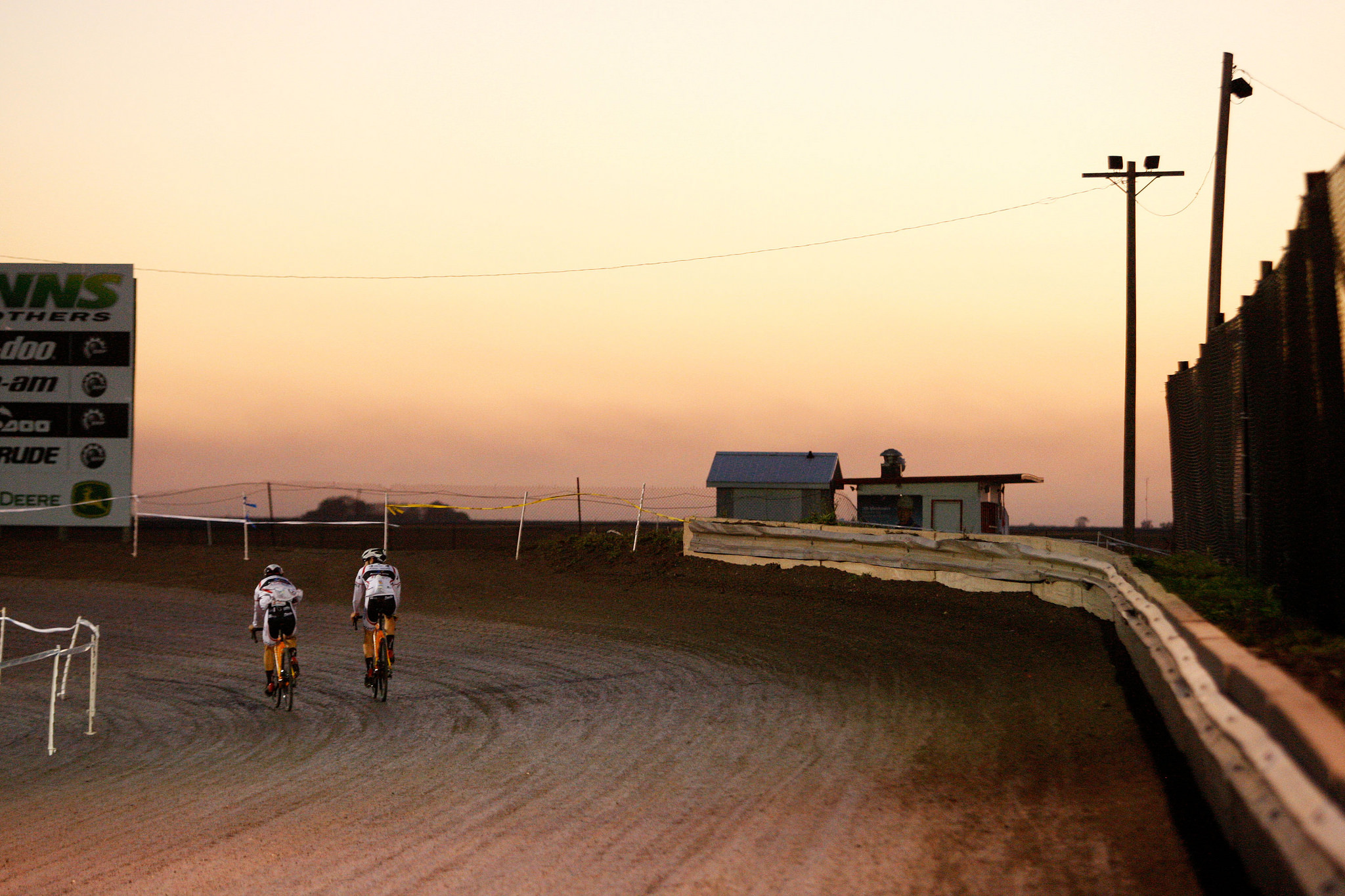 Into the sunset. Photo by Justin Lee.

← DarkCross 2015 – Dark, Fast, and a Little Crispy
Segregated Racing: A Matter of Opinion →