Today was a Very Special Day. Even more special than the day I fit into the same size jeans I wore when I was 17 (ok that day has not happened yet, but when it does it will be a Very Special Day too). For the first time EVER I got to ride a real bona fide carbon fiber (or fibre for us Canadians) road bike. Yes, that’s right, one of my friends actually trusted me with his bike, which he may be selling once he gets something even newer and fancier. It’s a 2006 Trek Madone 5.5, with Bontrager carbon handlebars, Dura-Ace 7800 shifters, brakes and derailleurs, Altegra 6700 compact crank and (most importantly) sparkly candy-apple red paint. It looks something like this: 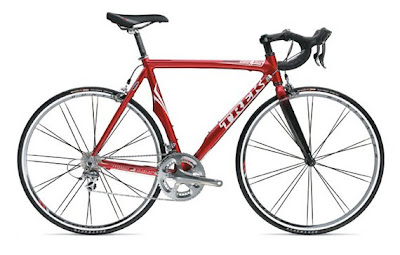 The Madone was one of a number of products introduced by Trek for Lance Armstrong during his historic seven Tour de France wins, and was named after the Col de la Madone, a 12K climb that Mr. A often used to test his fitness. Today I used it during the somewhat less historic morning ride to Headlingly, testing my fitness on the 500 meter west Perimeter overpass. The bike is remarkably stiff and and responsive, gently caressing the road as it rolls over cracks and bumps, while aggressively attacking climbs and leaping from a dead stop to full sprint in a single bound. The shifting is smooth, quiet and effortless. And makes the Giant feel, in comparison, something like this: 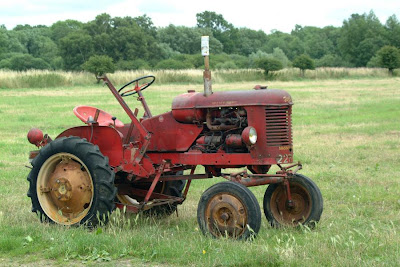 Don’t get me wrong, I love, have loved and will always love my Giant. It was my first, and no amount of gorgeous supple carbon fiber is going to change that. I do, however, feel a little badly that while the dear Giant lies in pieces in a basement, I am out gallivanting with it’s potential replacement. But I think I’ll get over it.

A few years ago we renovated our 1920’s house and went from one bathroom to three. Drunk with the wanton gluttony of so many biffies, I recklessly and arbitrarily tinkled in all three, alternating as the mood hit. Having two new bikes (loaners for the moment) in my possession in one week is creating much the same sensation. A plethora of dazzling new bike choices so vast it boggles the mind. Similar to the bathrooms, it’s hard to know where to sit next.

The Madone isn’t a bike I would have necessarily chosen for myself. But having ridden it, I can’t help but love the feel of it. Not to mention the fact that the current owner is an ex-bike mechanic who takes immaculate care of his bikes. At roughly five years old, it has received as much, if not more, care and maintenance than most children of the same age. And it’s certainly cleaner and quieter. This bike may not win me a Tour de France, but it just might help win me the overpass one day, or at the very least get me into those damn jeans.

← Viva Italia
As seen in Vogue →