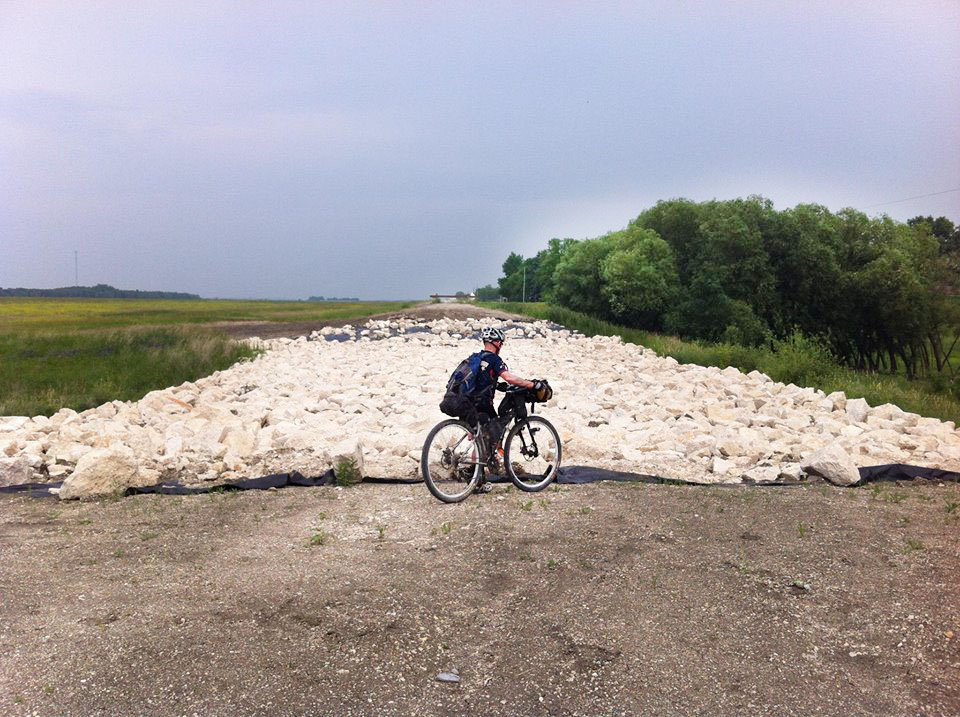 On Saturday morning I was (what else) observing the eighth stage of the Tour de France when a message from my friend Jason Carter came in that Lindsay Gauld was in St. Malo. Which was pretty weird, since St. Malo is a tiny town in the middle of nowhere, and I was there too. The difference was that I was sitting on a couch at my cabin glued to a Twitter feed on a screen the size of a deck of cards, and Lindsay was three days into a 1,300 kilometre journey across Manitoba via the Trans Canada Trail. There was a time when I thought I had my fingers on the pulse of the local cycling scene, but I have since learned there are far more pulses out there than I have fingers. I was oblivious.

For those who might not be from around here, Lindsay is something of a cycling legend in these parts, having recently clocked over a million kilometres on a bike, completed the Iditarod Invitational, and been inducted into the Manitoba Sports Hall of Fame. He also went to the Olympics back in 1972 while I was otherwise occupied with napping and eating PlayDough.

Fortunately, a proper cyclist always has a bicycle and at least one full racing kit at their disposal, so in a single bound I was up and on the road dressed head to toe in fashionable lycra to go find Lindsay and wish him well on his epic journey.

Jason was tracking Lindsay via an online spot finder, but the internet connection out in the country can be sketchy at best – and at its worst not unlike the tethered coconuts one might find on Gilligan’s Island. So Jason became my director sportif, e-barking out directions and time gaps via email, which I would then retrieve on my trusty i-gizmo.

11:20am
JC: As of 3 minutes ago I show him near the intersection of Hwy 59, right across from St. Malo park, along chemin LeRang.

This is ridiculously close to where I was, yet there was no sign of Lidsay. 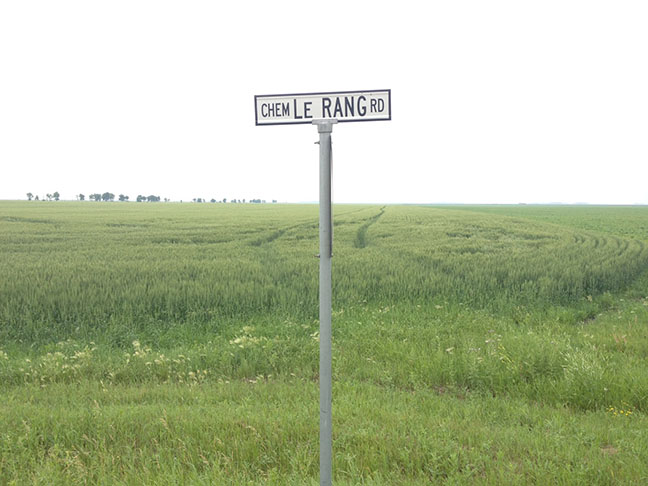 Confused, I rode into town. Epic de St. Malo is a recycling depot, not a restaurant. Still no sign of Lindsay, and I was feeling more than a little conspicuous cruising around town in my racing kit. It turned out just prior to my arrival in town Lindsay was in fact having a nice hot breakfast at the St. Malo Chicken Chef next door with the Men in Tights.

11:32
JC: He’s now heading Northbound on St. Malo Avenue towards St. Hilaire Street. I’ll keep tracking him until you tell me you got him or have given up.

Given up? Clearly JC has me confused with someone else.

I hightailed it into the park. At this point Jason included Lindsay in the emails, to let him know I was chasing him.

At this point I was standing at the dam amid some very confused campers. Lindsay was not one of them.

11:46
JC: Go to Lakeshore Rd. Northbound. That’s the Trans Canada Trail. Lindsay is probably heading to Lakeshore via De la Grotte. Both are on the Crow Wing Trail.

Ah, of course. I rode the Crow Wing Trail a couple of years ago during Actif Epica – a fact of little help considering I have difficulty remembering where I park my car, never mind a race course 2 years ago in the dead of winter.

11:48
JC: You’re chasing him now. He’s 3 minutes ahead of you, northbound on Lakeshore.

I found Lakeshore – a gravel road that wound into the countryside and landed me at a dead end in a farmyard. The cows were of little help. I had no choice but to backtrack. 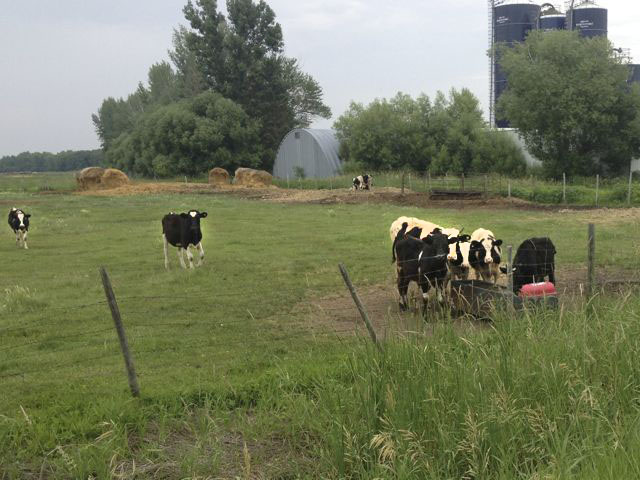 CC: Shit. Lakeshore ended in dead end at a farm. Will backtrack.

11:55
JC: No, too far. He’s now gone from Lakeshore and taken the mile road west on Goulet, gone along that for awhile, and turned north again on an un-named road or trail.   Careful, there’s another west portion of Goulet – but he is not on that.  He’s going north on the Crow Wing trail. He will soon be turning west on Wiebe Rd. towards La Rochelle. From Goulet northbound, turn west on Weibe Rd. for a mile and a half.  Then north on Padoue for a mile. You’re a mile or two behind, now.

Shit’s getting crazy now. As Jason madly continued to relay directions, I madly pedalled my bike hither and thither through the rural Manitoba countryside, becoming less concerned about Lindsay’s location than my own.

Then I found the little blue arrow signs that (mostly) indicate the Crow Wing Trail. Better yet, I found tire marks. BIKE tire marks – at least 3 sets. I rode like the devil through farmers’ fields, gravel, and dirt to try to catch Lindsay and his crew. 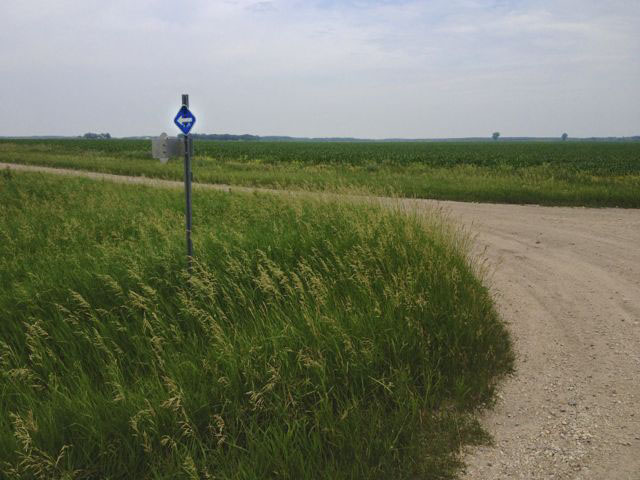 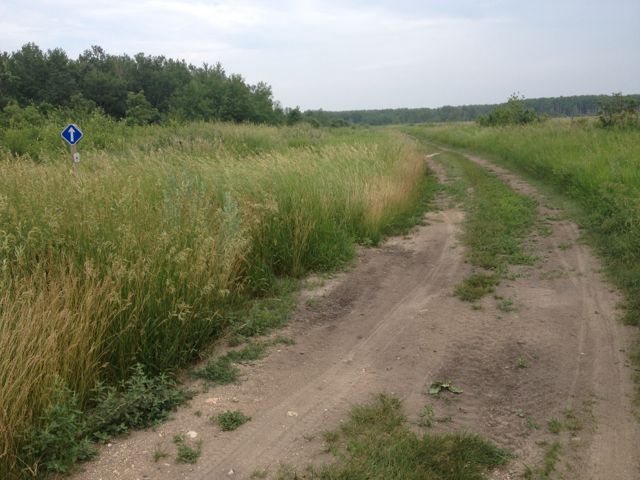 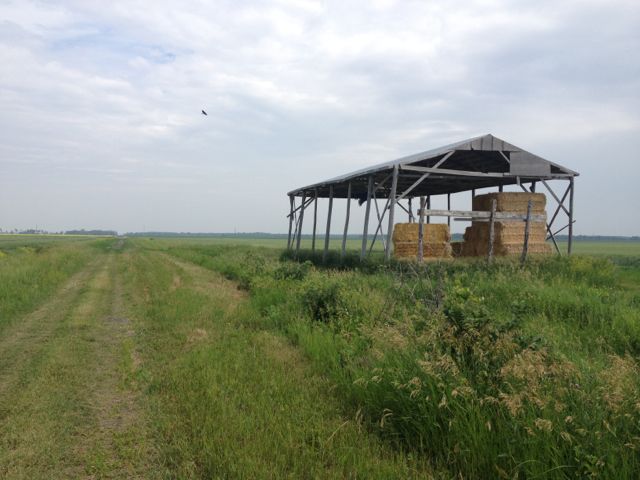 Lindsay Gauld is not an easy man to catch.

12:29
JC: Lindsay says you’re too far behind on gravel. Go west to Highway 59, then north to St. Pierre. Meet him at the intersection of 59 and Hebert.

Of all of the surfaces on which you can ride a bicycle, pavement is the one with which I am most comfortable and familiar. The tailwind helped. 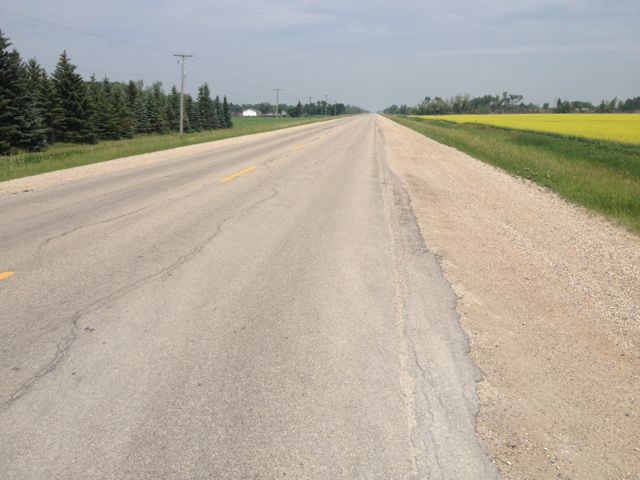 I came screaming into St. Pierre and was standing at the designated corner for roughly 30 seconds when Lindsay and company came into view. I let Jason know our mission was accomplished. I had finally found Lindsay. 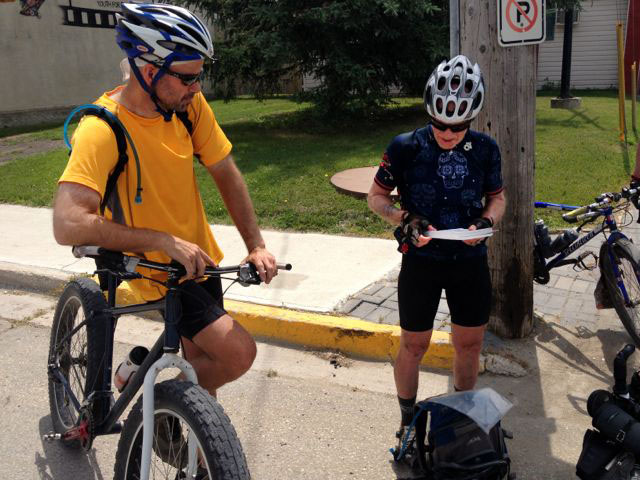 12:58
JC: Yaaay!!! I thought you’d be way behind and I’d get yelled at for making them wait for you. Good work. Better workout, I bet.

Unfortunately I had to get back to the family, but was able to take a moment to chat with Lindsay and his crackerjack support crew consisting of Charles, Cory and Peter. I asked him about the motivation behind this latest ultra undertaking and how things were shaking out so far.

Lindsay finished his 1,300km ride and is no doubt in the process of planning his next adventure. One might be tempted to say this was a pretty amazing feat for someone his age, but to do so would be both wrongheaded and inaccurate – because to say that implies that anyone younger would have the knowledge, inclination and ability to do the same. Which falls somewhere between unlikely and ridiculous.

Lindsay traversed our fair province from border to border in 5 days, 10 hours, and 2 minutes. Or roughly half of what it would take someone half his age, if they even had the cojones to do it in the first place. Congratulations Lindsay! Thanks for taking the time to stop and chat. And thanks to Jason for remote navigating someone who is, by most standards, directionally challenged. It is indeed a miracle I’m not in Miami.