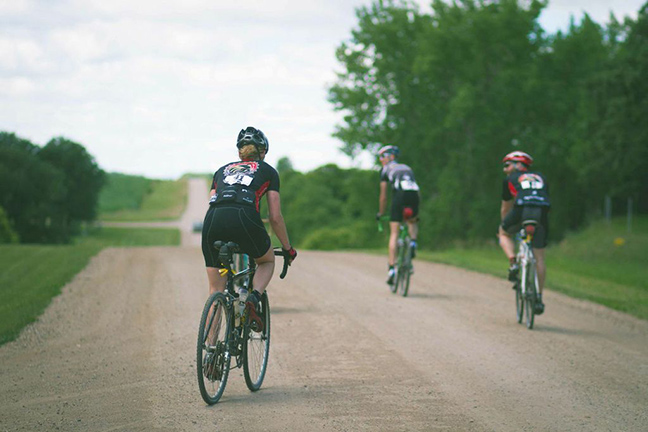 Altona is a small Mennonite town in Southern Manitoba, surrounded by a million other small Mennonite towns. In Altona, there is a group of bicycle enthusiasts, appropriately called the Altona Bicycle Enthusiasts, or ABES, which I think is pretty darn clever. Last Saturday, they, along with the good folk of the OCC, held a 170km race called the Knacksot ne Runtreis Gravel Grinder. Heavens. With a name like that, how could I refuse? 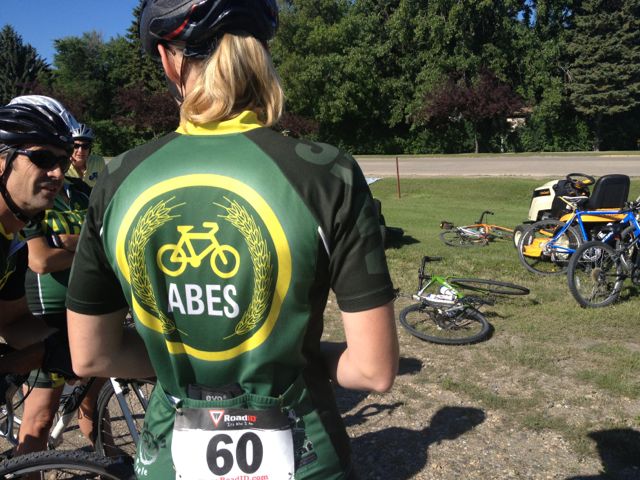 Plus, word has it the ABES put on a pretty good party. 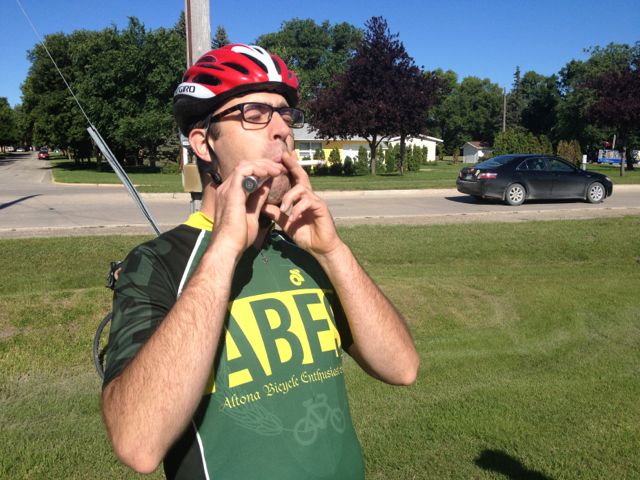 In case you can’t tell what’s going on here, this is Shaun smoking both a real AND an electronic cigarette just before the start of the race. I think in a past life Shaun was an Italian bike racer.

For those not from around here, it is important not to confuse Mennonites with Hutterites. While they share similar roots and beliefs, they are very different in many ways. For example, Hutterites tend to live in colonies and pretty much keep to themselves, while Mennonites live willy-nilly wherever they want.

However, both groups wear distinctive outfits that make them pretty easy to pick out in a crowd. These are Hutterites: 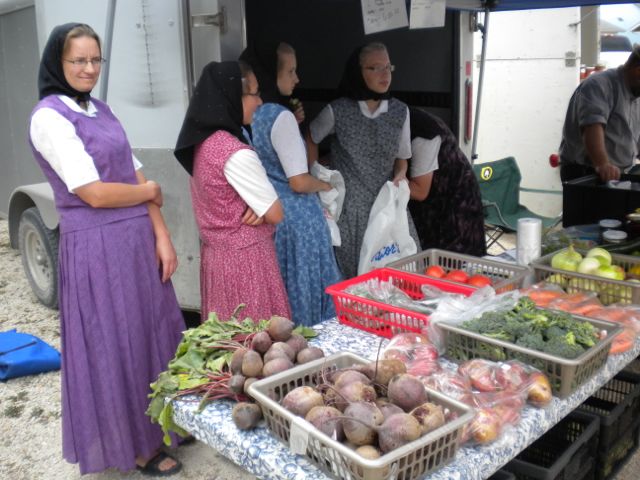 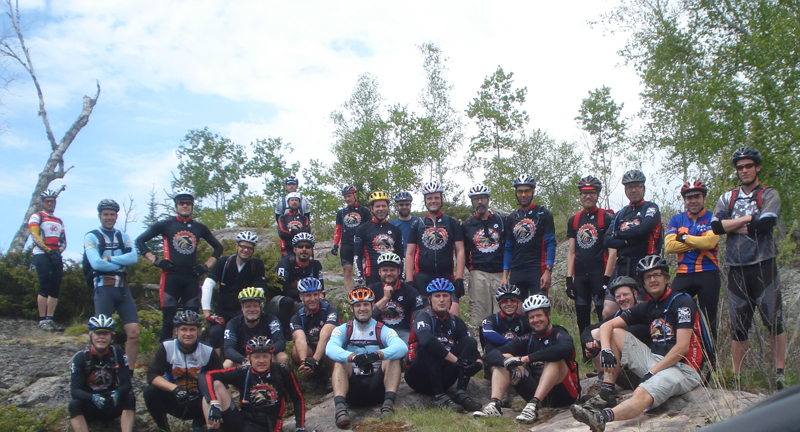 Or most of them, anyway.

Many Mennonites speak low German. I’m no expert, but from what I can tell, low German is to regular German what Yiddish is to Hebrew. Since I don’t a word of German, low, high, or otherwise, the meaning behind the name of the race was a complete mystery. KnackSot has a bit of a dirty sound to it, and the ABES do have a pretty bawdy sense of humour, so I assumed the worst.

The KnackSot happened to correspond with Altona’s annual Sunflower Festival, and as such all the racers were invited to participate in the festival parade, which was as awesome as it was slow. 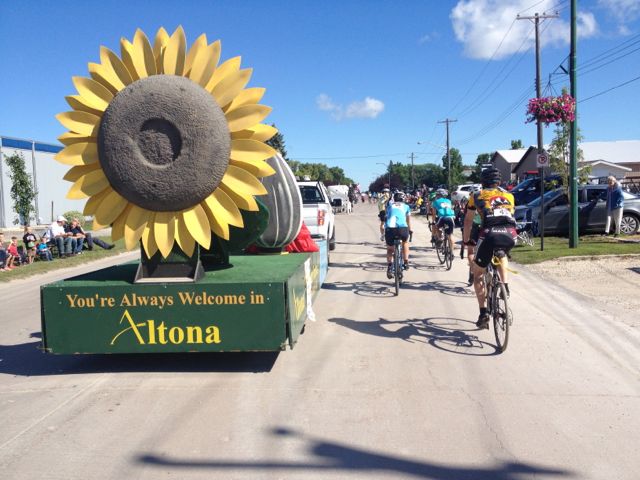 I ‘ve always wanted to be in a parade. Mind you, I may have pictured myself sitting in the back of a convertible with a tiara on my head and a sash reading “2o13 Altona Sunflower Festival Queen” instead of ratchet pedalling a bike at two kilometres an hour in a helmet and sweaty black lycra, but we can’t all be winners. Sniff. 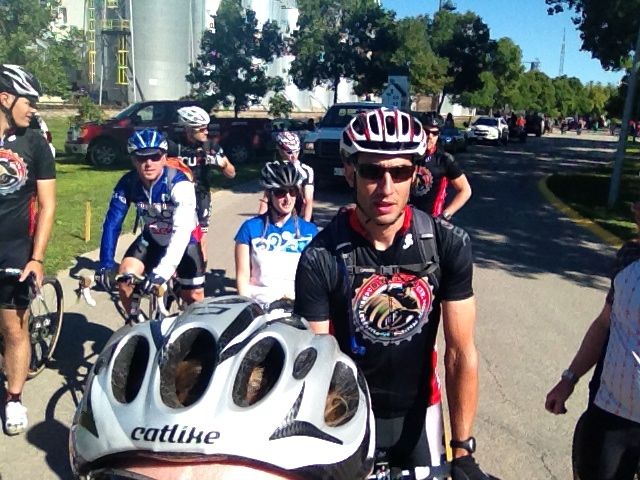 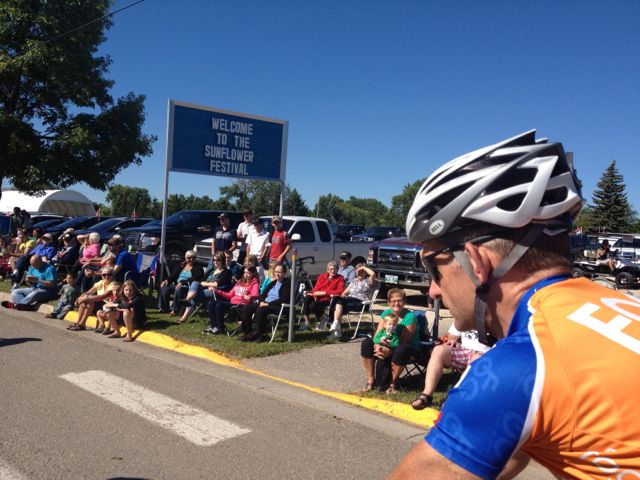 Nevertheless, starting the KnackSot gravel race (or any race for that matter) as part of a parade is a pretty big deal, and a responsibility not to be taken lightly. 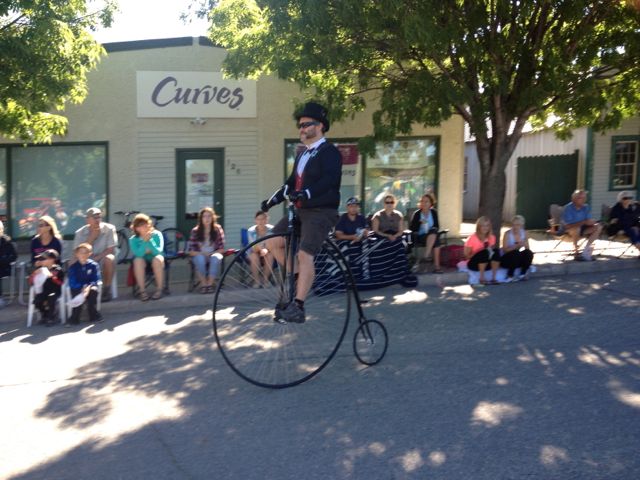 The race officially got going at the end of the parade. I should mention here that there were actually three distance options in the Knacksot – 50, 80, or 170 kilometres. When I asked The Dark Lord which distance the Roosters were planning to do, he said “170 of course”, like there was any question. If we Roosters are known for anything other than our love of beer, it is our complete disdain for moderation. 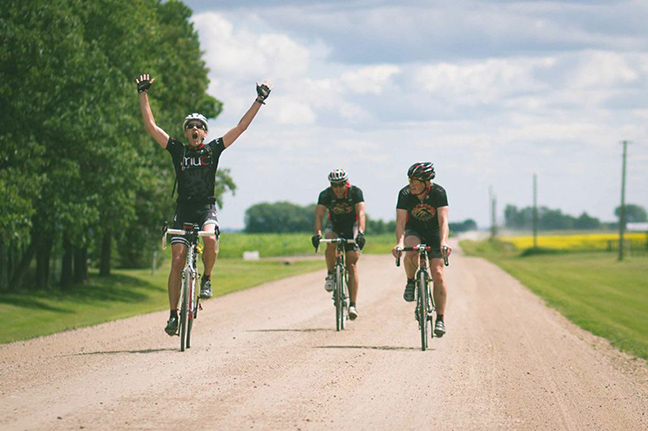 All the racers started together, with different routes mapped out for each. Seven kilometers from the start, the Roosters made their move. Or rather, the really fast ones did. I saw the move from too far back and began chasing madly to catch the back of the splinter group. I managed to catch them, but the effort was enough that even hanging on was very difficult. Finally I just had to accept that in terms of this group, I was punching above my weight. If you feel crappy in the first hour of a 170km race, chances are you are in for a world of pain that will last for approximately an eternity. 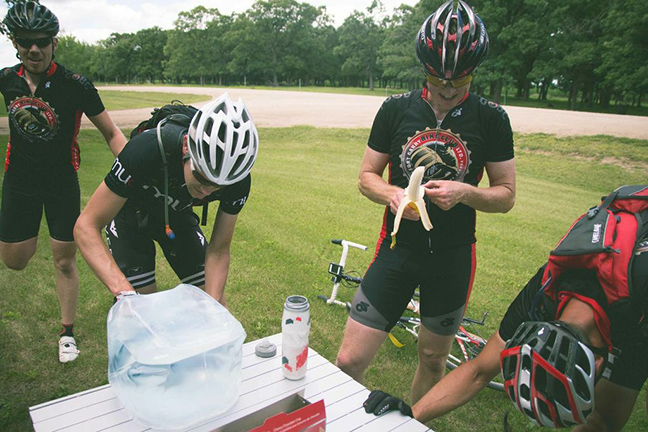 Here is the lead group at a rest stop one third of the way through the race. Chris, Terry, JP and Daniel would stay together until the end, finishing in 5 hours and 50 minutes. I hope Terry is puking here, because that would make me feel a bit better. The fact that Chris is laughing at him makes me think he is. So we’ll go with that.

Dave Gerrard gallantly waited for me after I dropped from the group, and we picked up Scottie and Adam shortly after, and had intermittent contact with other racers here and there. But for the most part, we stayed together. 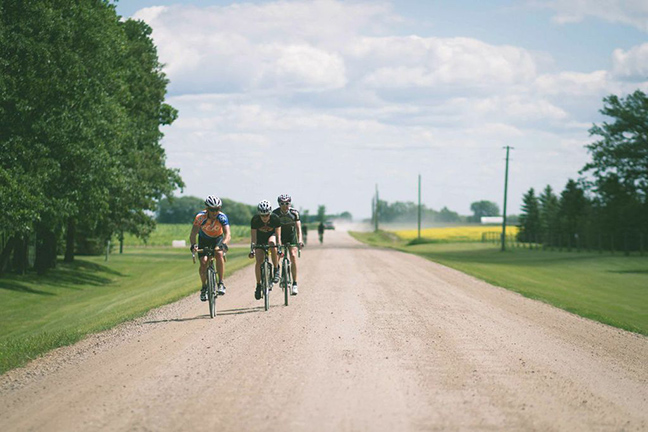 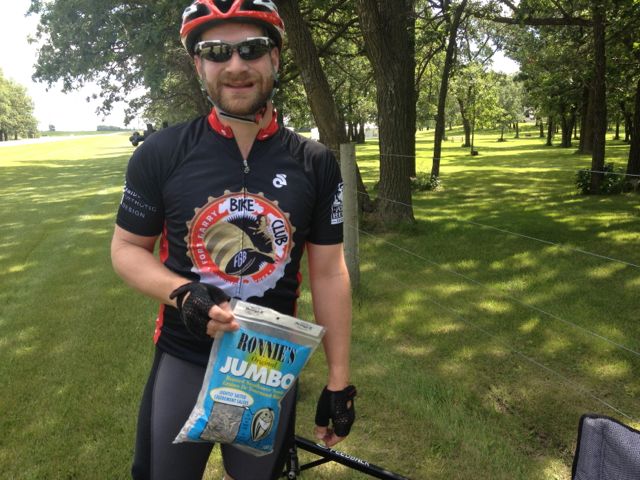 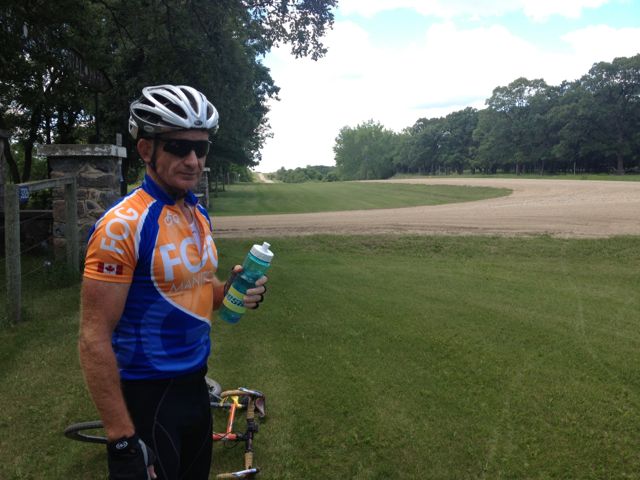 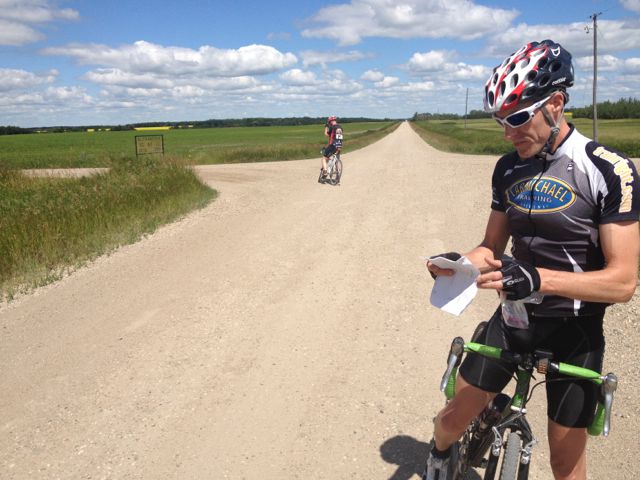 We had various stops along the way: food stops, nature stops, and where the hell are we stops. Each of us took our turn feeling terrible, while the others offered food, encouragement, and a wheel to follow.

After a particularly heinous uphill gravel climb with a grade of about 14%, Dave’s knee gave out. I could tell because I am so very in-tune with the subtle signs associated with knee discomfort, such as pedalling with one leg whilst lamenting “My knee is fucked”. 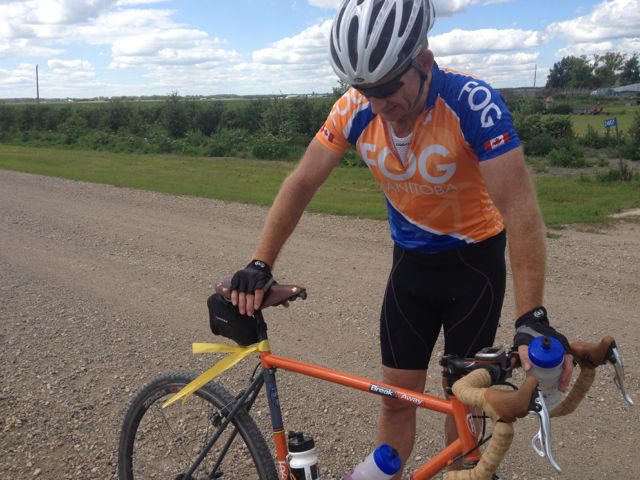 We called the SAG wagon for Dave, and resisted the temptation to join him. By this point Scottie had ditched us to try to close the gap on the lead group, leaving Adam and I to complete the remainder of the race together. Adam was feeling slightly crappier than I was, so while I offered my wheel as much as I could (or he would let me), he provided excellent company and navigation, without which I would have ended up in Thunder Bay. Thanks Adam!

After the race, we were invited to the amazing Krahn Barn in Neubergthal, a charming Mennonite heritage village five miles from Altona. 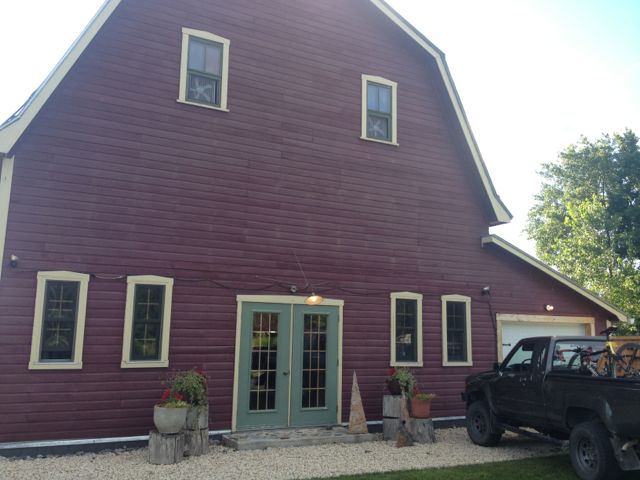 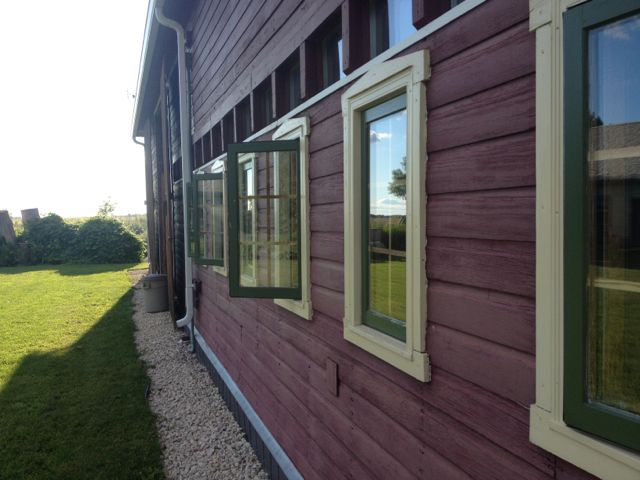 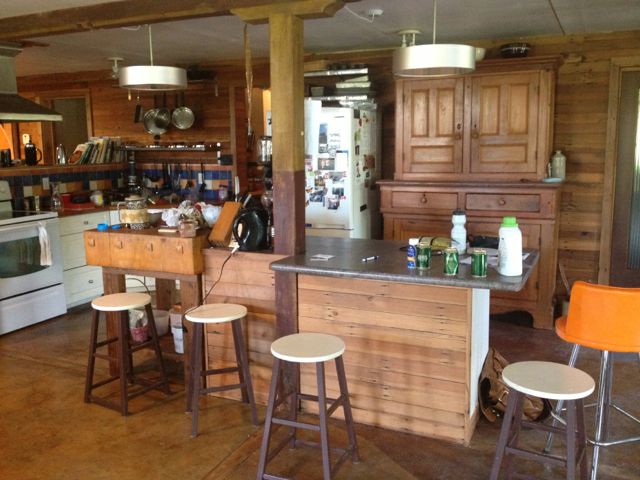 The Krahns bought the barn in 1998 (or I think that’s what their daughter Genevieve told us) and converted it into a jaw-droppingly beautiful home. I snooped a little inside, but sadly missed the grand tour while visiting with one of the residents. 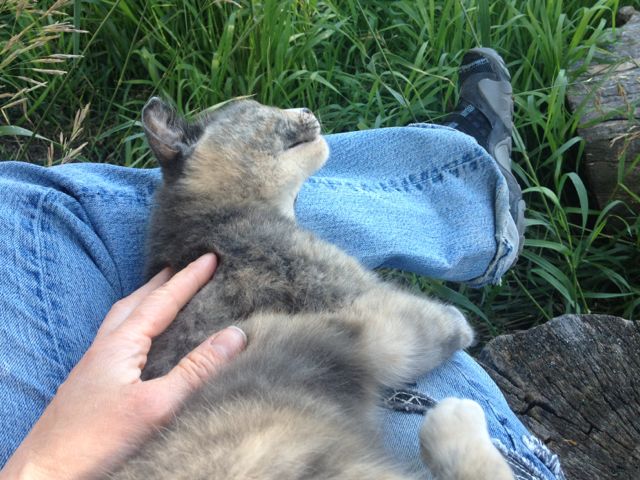 I am a lifelong city gal, but after seeing the Krahn barn, I think I could adapt quite nicely to life in a small Mennonite Village – growing eggs, planting and tending stuff, or whatever else country people do. This dream is completely contingent, however, on being within five minutes of an operational source of liquor – which in these parts might be a deal-breaker.

Paul and Marguerite were perfect hosts, feeding us locally-made sausage (MUST GET MORE), malt beverages, the requisite shit-ton of chips, and, of course, KnackSot. 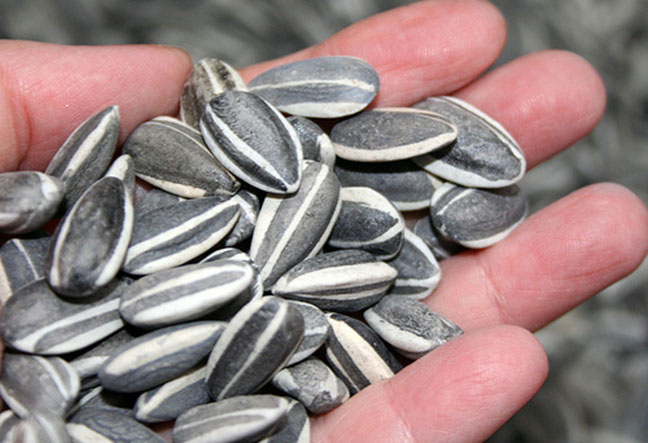 Yes, it turns out that KnackSot (pronounced ka-NUK-zoat) is low-German for sunflower seeds – or “crack seeds”, if you were to translate literally.

…Crack seeds (giggle). I knew I could count on the ABES.

The rest of the evening was spent, in the words of our host, doing what friends do. 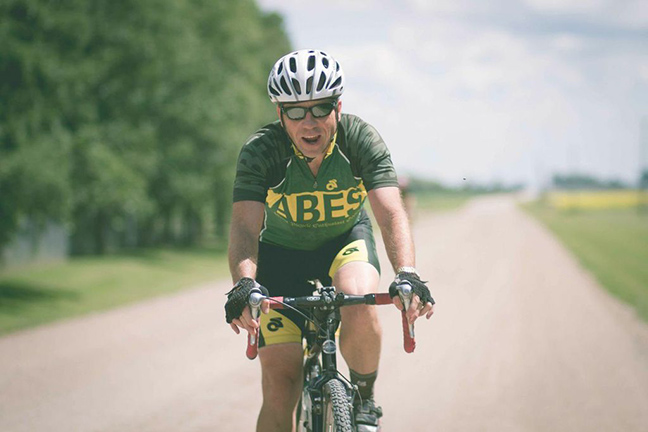 Thanks to Jared Falk for the use of his lovely photos. You can tell his from mine because his are good. And huge thanks to Scott, Adam, and David for being such great riding companions. Most of all, thanks to Paul, Marguerite, the ABES, Ian Hall and the OCC for giving us such a great day.

← Finding Yonder: The Abitibi Trail
The Guerciotti Project, Phase 3: A Headset with a Coke Chaser →