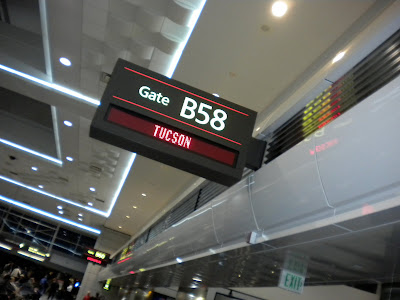 Everytime I travel I am reminded of how much I hate travelling. I was under the delusion for many years that I loved to travel. I was wrong. I am not good at waiting, and travelling requires a lot of it. So I need many, many distractions to keep myself occupied, sort of like how we needed to pack a suitcase of trucks and books and stuff to try to get the kids to sit still through things. The sheer panic of running out of The Stuff was almost unbearable.

On route to Tucson, via Denver. Finally. Waiting at the Winnipeg Airport was boring. Really boring. I sat like a refugee in the International Departure Lounge for an hour or so, having a forty dollar rubber sandwich, with so much anticipation I thought I would bust. The Winnipeg Airport is horrid, a total embarrassment. If I could help them finish the new terminal, I would. And I would happily drive the bulldozer that takes the old one down.

Way longer stop in Denver than I expected (ok, didn’t really look at my connections and do the math). About 4 hours to kill (unbearable) which I spent shopping, wandering, surfing (thank you wii fi) and watching the tail end of a movie on my laptop. Then off to dinner at Wolfgang Puck, a descent salad (by airport standards anyway) made slightly better by a glass (ok two) of wine. During dinner I read my book, something obscure from the late 1970’s given by a friend. A commotion at the next table caught my attentions and I looked up to see a couple looking at me eagerly as the woman held up the book she was reading for me to see. Same book. What are the chances? Just so happens the book is kind of about miracles, and about believing the impossible, so it was an odd coincidence to say the least.

The flight to Tucson finally left and arrived. The weather at 9pm was mild, no jacket required. I was delighted to see wild and wonderful cactii on the side of the road, and can’t wait to see what this place looks like in the daylight.

Scott, Michelle and Ben (the rest of the Winnipeg posse) had arrived an hour before with their bikes and arrived back at the hotel with beer moments after I arrived (speaking of miracles). We enjoyed a drink and talked about what the next day will hold: breakfast, registration, bike set up, RIDE (a 40/50 mile loop Scott has planned out), shopping (triathlon store Michelle wants to visit), orientation, then dinner with Bob and Margaret, fellow Winnipeggers who have been here for a few weeks already. Bob was drunk-texting Ben last night with the plans, which were mostly incoherent and misspelled. But I think we are having rice and beans with them.

Should be an awesome day. Had a terrible sleep last night, probably the excitement…

← Bottom’s Up
Tucson Day One →