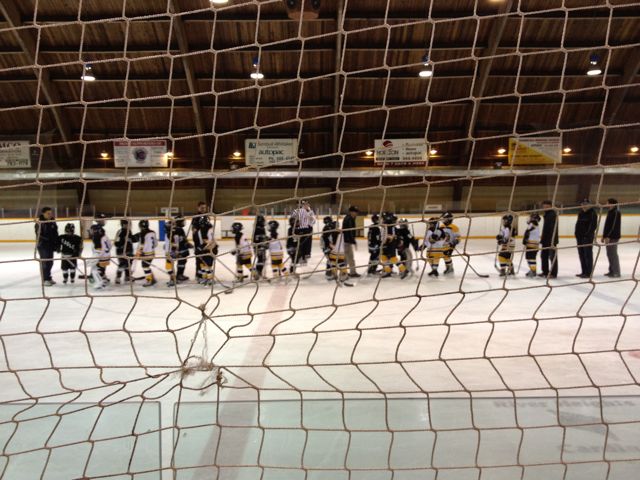 A boy sits on a bench watching his team play. It’s the playoffs. It’s an important game and he is very excited. He wants to help his team win. He has been sitting and watching for a long time. While the other players rotate on and off he patiently sits and waits, glancing eagerly at his coaches waiting to be told to go on the ice.

Finally he approaches his coach and asks when he will get to play. Wrapped up in the very close game, he tells the boy to ask the other coach. When he does, he’s told he will go on next shift. At the shift change he charges onto the ice to play his position, only to have his coach yell his name, calling him back to the bench. He is confused, but is starting to understand what is happening and why.

The boy does not play the rest of the game. He has sat out for most of the second period, and all of the third. He watches his parents, grandfather and aunt across the arena. They have come to see him play. He is embarrassed and chokes back the tears as his team wins the game and lines up to shake the hands of the opposing team. He is 12 years old.

This post was about my son, but it was not about hockey. It is about people losing sight of what recreational sport is all about.

In this regard, cycling is no better than hockey. I’ve seen age group bike racers snub fellow racers because they got beaten fair and square in a local road race. I’ve seen a racer swear and yell at a volunteer because her timing band got suck to her glove in a local duathlon. I’ve been told I should I should quit racing because I crashed.

I’ve seen baseball dads berate a 14 year-old umpire, and I’ve seen kids told they suck by kids on their own soccer team. There are examples to be seen across all sports. Perhaps in the context of competition, it is human nature to kill the weak to appear stronger. Maybe the adrenaline in our still evolving human brains overrides common sense and causes us to lose sight of the fact we are doing this for fun.

My son’s experience was a reminder to keep it real – as an athlete, a parent and a coach. His coaches have taken responsibility and issued a sincere apology to us and to him. I am confident he will forgive them, because that’s the kind of kid he is. But he will not forget.

← Does this World Champion jersey make me look fat?
Tucson: Getting there is not quite half the fun →