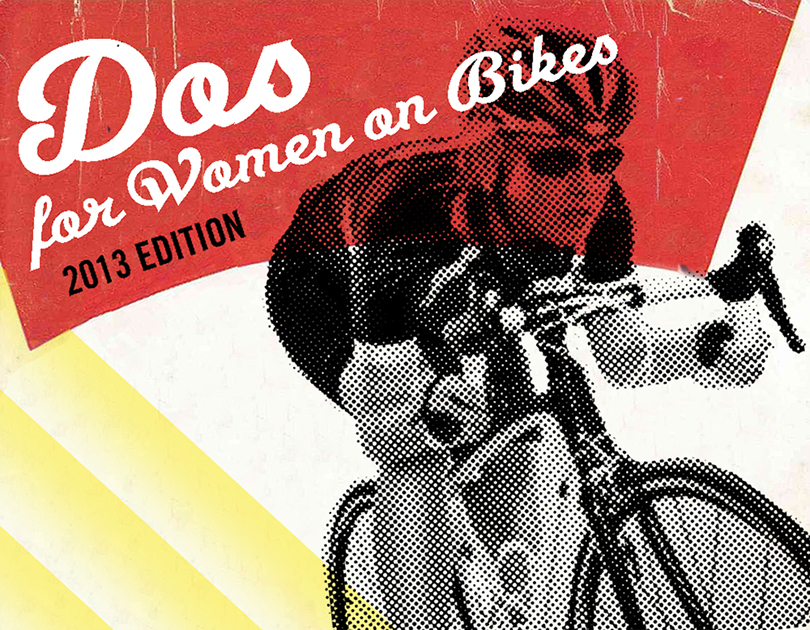 Back in 1895, the New York World published a list of 41 Don’t for Women on Bicycles. It made the rounds on the interwebs thanks to the ever clever Brain Pickings blog and included sage wisdoms like: “Don’t wear a garden hat with bloomers” and“never (cycle) without needle, thread and thimble”. The list has the air of having been written by room full of finger-wagging dowager aunts and disapproving old white guys smoking cigars. 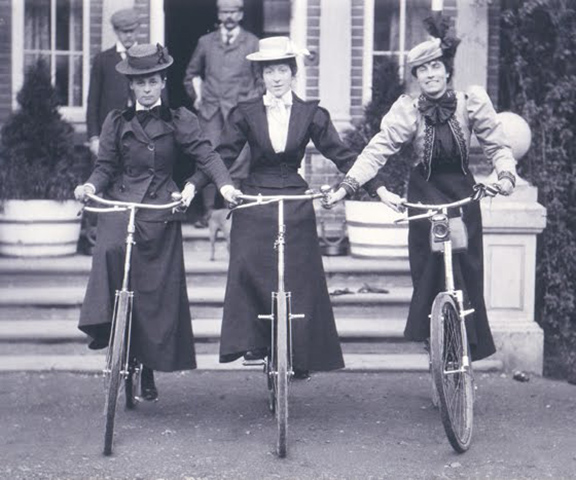 Needless to say, the list was in dire need of an update. There are a number of newer, and highly entertaining lists out there already that apply to cyclists (roadies in particular), such as the sacred  Rules Velominatus, and The Official Rules for Euro Cyclist, but I felt there were some things that apply specifically to today’s unbloomered women that haven’t really been covered and should be shared. I decided to present them as “Dos” rather than “Don’ts” because nobody likes a negative bossypants.

I am by no means an expert, and this is not a definitive list, but every tip here comes from either personal experience or talking to other women riders of varying experience and ability. Some are meant to be funny, some are not. Hopefully you can tell the difference.

#1 – Love thy brother
No matter how gracious they may be about it, no guy likes getting chicked. You know it happened, he knows it happened, so don’t make it worse by bragging to the world about how you passed, dropped, or otherwise out-rode a man. I have never seen a guy brag to his buddies about dropping a woman, so be sure to offer same courtesy and respect. The fastest way to be uninvited to group rides is behaving like a she-jerk. 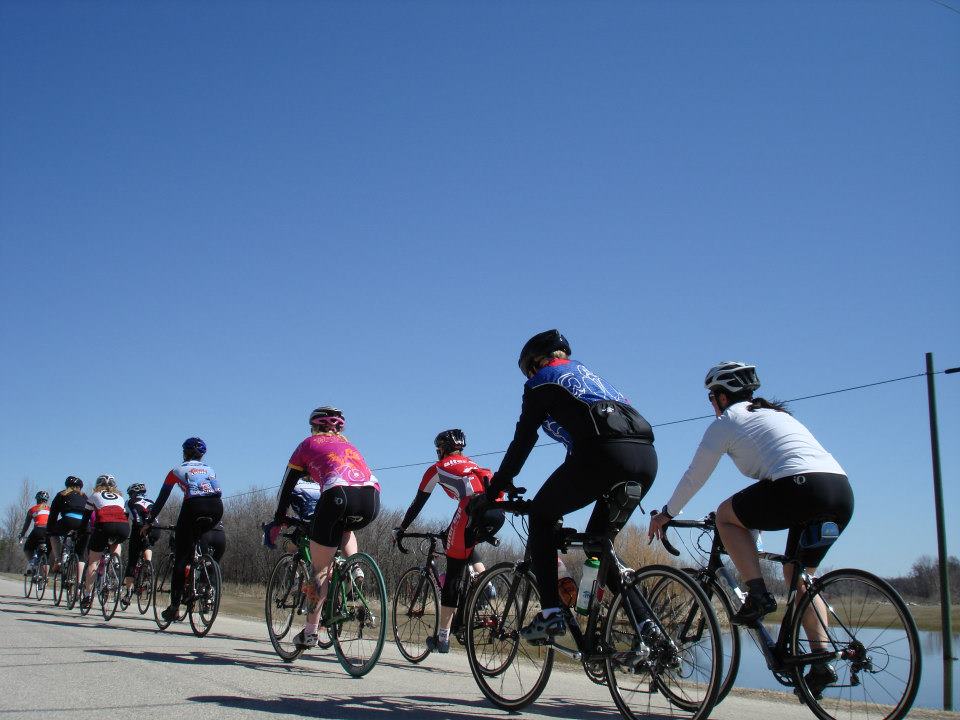 It’s no secret that I, along with many of my cycling sisters, have an issue with pink. While I have nothing personal against the colour, I do take exception to the “pink it and shrink it” policy the cycling industry has adopted in its halfhearted attempts to sell stuff to it’s proportionally minute female market. Having said that, you should be able to wear whatever you want, and If that happens to be pink, well, lucky you, you’ll have tons to choose from. If pink doesn’t tickle your fancy, well good luck finding something you like in your size. Sick of buying men’s bike gear that does’t fit just so you don’t look like Barbie? Tell your LBS, leave comments on manufacturers websites. If we are loud enough, at some point someone will listen.

#3 – Go with the Flow
If you ride while you are menstruating, you are a badass. Period. You’ll need to bring spare supplies – so don’t wear one of those silly useless one-pocket “jerseys” for women. If manufacturers had any insight into the needs of women they would put a discreet little tampon pocket somewhere in our jerseys, plus an emergency compartment for chocolate. Also bring a ziploc bag for disposal later – even mother nature herself shouldn’t have to deal with that mess. As for the question of underwear (see tip #4), this is one time you can make an exception. Or, if you are so inclined, stick a maxi pad directly to your chamois for extra protection. It’s already padded down there, so nobody will notice. 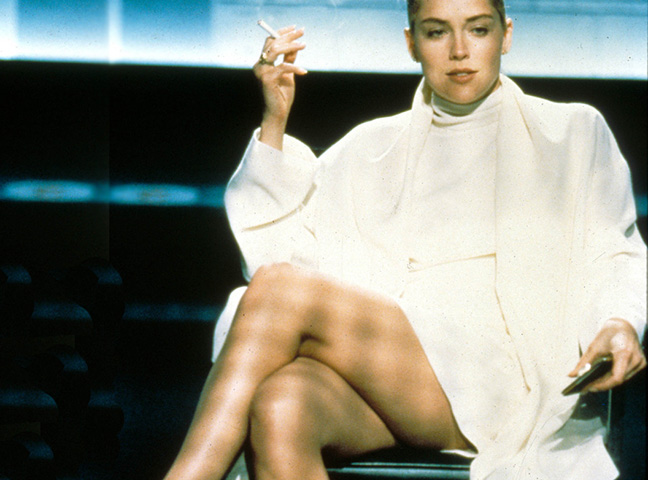 Other than special occasions like police interrogations, decorum and hygiene dictate that we ladies should wear underpants. However, bike shorts are engineered in such a way that they should always be worn commando. On your bike, your sexy, lacy panties will chafe and pinch you in ways you never thought possible. Victoria’s real secret? Have 2 or three pairs of bike shorts and wash them after each wear. There is nothing grosser than dirty bike shorts, no matter what this commercial says.

#5 – Harden the Fuck Up
In the spirit of the Vie Velominatus, road cyclists must, regardless of gender, abide the sanctity of Rule V. There are times to be soft, gentle and motherly. This is not one of them.

#6 – Ride with Men
If you want to get faster, you need to ride with people that are faster than you, and sometimes that means venturing a bit beyond your comfort zone. This doesn’t mean finding a group of cat 3 alpha-males that will rip your legs off ride after miserable ride, but merely being open to the possibility of riding with people of the non-female variety. If they make you feel bad or unwelcome, it’s not because they are guys, it’s because they are assholes. Unless you are a pro, and if you race local events, you will be racing side by side with men because the pool is simply not big enough to hold women only races. So you (and them) may as well get used to it.

#7 – Never underestimate the Power of a Good Saddle 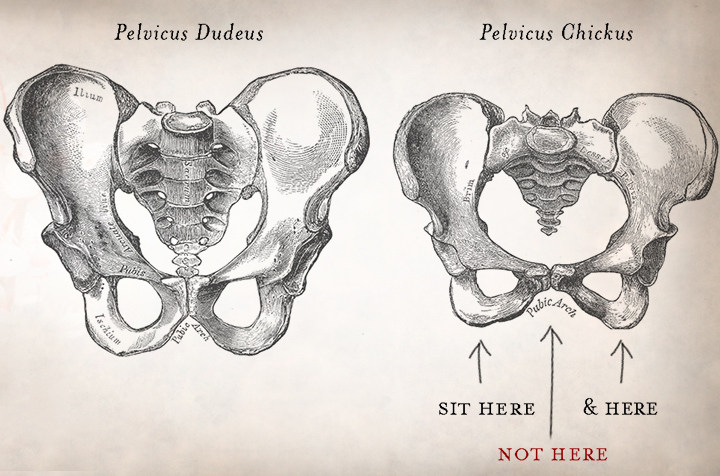 If riding hurts you, you will not ride, plain and simple. Probably one of the most common complaints I hear from women is that their seat is uncomfortable. Fear not ladies, this is not something you need to tolerate like the creep who talks to you boobs instead of your face. The trick is not getting one that is all soft and cushy, but rather one that fits your bones. This has nothing to do with the size of your gorgeous and curvaceous bottom, but rather the pointy parts of your pelvis that you sit on. Most good bike shops have a nifty device that will measure the distance between your sit bones and hence tell you what size saddle you should use. There are also women-specific saddles with cut-outs in the middle that will change your life. Trust me. 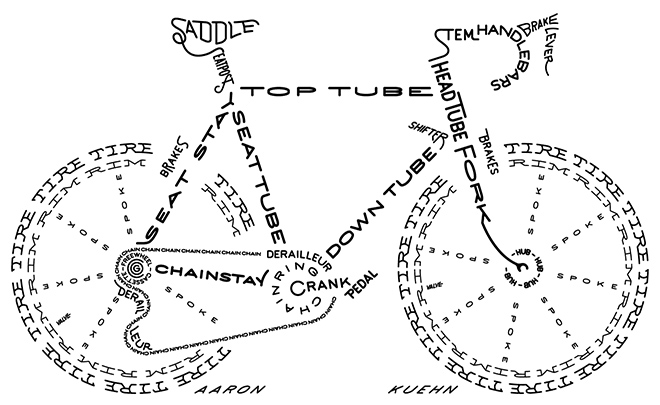 There are plenty of guys out there who can barely change their own flat, so don’t feel bad if you don’t know every one of the gazillion parts of a bicycle by name. Start small and learn the basics – like how to change your tubes and tyres, and how to clean and lube your chain, for example. If you’re too embarrassed to ask someone at your bike shop to show you, there are plenty of videos and such on the interwebs. There are also great workshops out there you can take, like the ones at the Bike Dump right here in Winnipeg. I can’t promise they will be full of hot guys, but one never knows, right? In the meantime, get to know the names of the basic parts of a bike and you will never have to use the word “thingy” in the bike shop again.

Also, remember to always have tools with you when you ride: spare tube, bike lever, CO2 cartridges or pump, and multi-tool. Being able to change your own flat on the side of the road in the poring rain automatically earns you a post-ride martini. If you also happen to have your period, you get three. 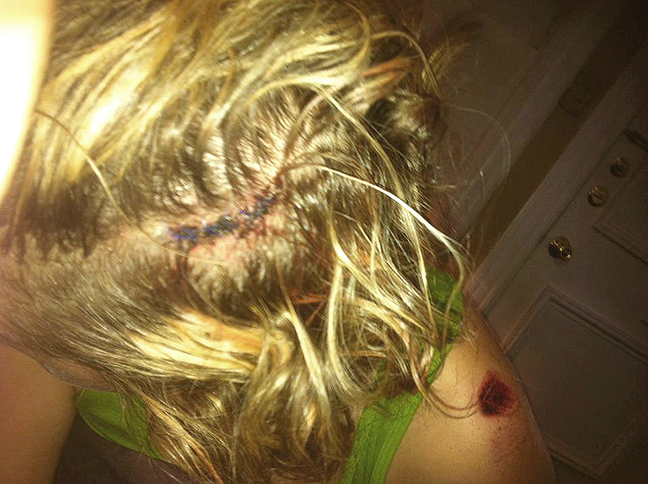 This photograph shows a friend of a friend after she took a spill on her bike while riding some trails on her way to work. She doesn’t like riding with a helmet on because she is a confident and experienced rider, and she doesn’t want to wreck her hair.

I know I’m starting to sound like a broken record here, and I also know that wearing a helmet can really fuck up your fabulous ‘do. The great thing is that the more you ride your bike, the less you will care, and everyone else will be too busy checking out your spectacular cyclist ass to notice your hair. 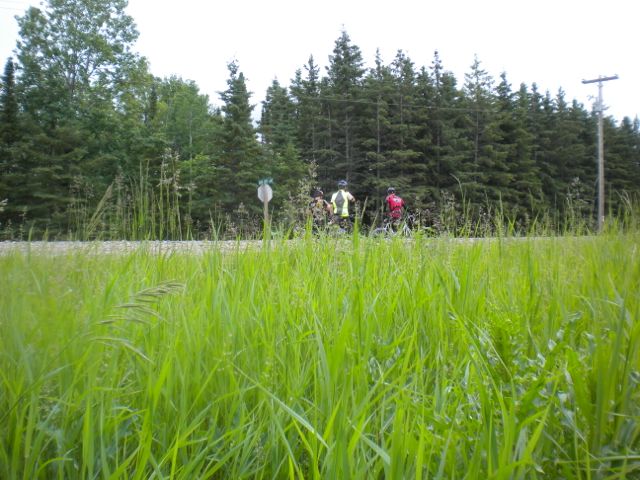 If you watch bike races, you’ve no doubt heard the announcers talk about Nature Breaks, which is just a fancy way to say the riders are stopping to pee. Anatomy being what it is, male riders can stop pretty much anywhere, pull down the front of their bib shorts and let fly. For women, peeing in bib shorts is decidedly more complicated, requiring the removal of not only your shorts, but much of your other clothing as well. I for one do not love squatting naked in a ditch with a crowd of other riders nearby, so on long rides I never wear bibs. Even still, finding privacy on the bald prairie or Arizona desert can be challenging. On group rides, we often decide en masse to stop near a cluster of trees, bush, or deep roadside ditch with long grass. The boys take one side of the road and the ladies take the other. In such cases, choose your spot carefully – that leaf you choose to wipe yourself could very well be poison ivy.

Peeing during a race can be trickier. Most road races are short enough that it’s not an issue, but on longer races (or even “not” races like Muddy Waters), your tinkle technique can mean the difference between staying with the pack or getting dropped like a baby giraffe. I’ve heard of women just peeing their pants. This is pretty extreme, and it would have to be a pretty important race for my mind to overpower my bladder which has been trained not to pee while I’m wearing pants. I’ve learned to either hold it, or try to time a turbo-pee when the boys stop. It’s usually messy, and not terribly discreet, but generally people are too occupied with their own business to notice.

There are a few “don’ts” I will leave you with. Cycling is and can be an intimidating, male-dominated sport. But if you love it, don’t let that deter you, and whatever you do, don’t let anybody make you feel like you don’t belong.