October 20, 2013 · by CycleChick · in The Campagnolo Experience, Travel 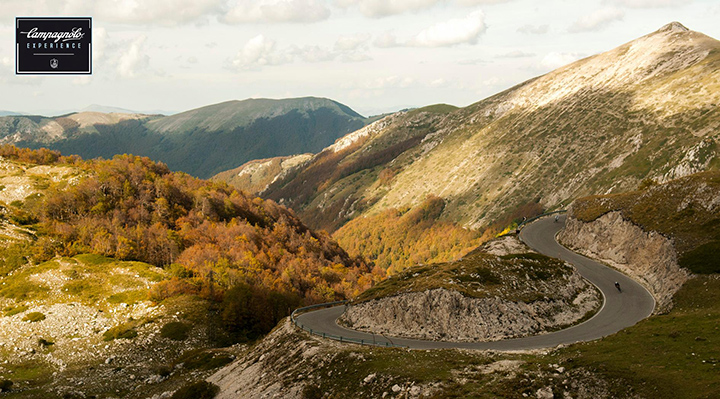 In case you hadn’t heard, I’m not much of a climber. The lack of elevation where I live, combined with my not-exactly-petite stature and delicate composition make me about as suited to going uphill as an old John Deer tractor. However, under the right circumstances, being good at something has little to do with how much it can be enjoyed.

Speaking of enjoyment, I really couldn’t have picked a better group of people to be sharing this experience with. Our conversations are easy and we always seem to be laughing. 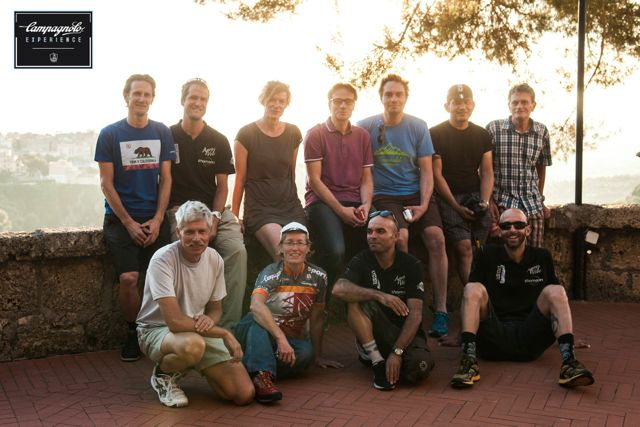 We talk about everything under the sun, but I must say I get the most enjoyment from listening to the Europeans among us talk about Europeans. I have learned that while they do make exceptionally good beer, the Belgians are not to be trusted. The Italians and Spanish are half an hour late for everything, while the Germans are fifteen minutes early. Finnish women make Swedish women look like dishrags, and the Dutch are becoming more British than the British. While there is some debate about which nation boasts the worst drivers (although the Italians are favoured), there seems to be clear consensus that everyone hates the French. 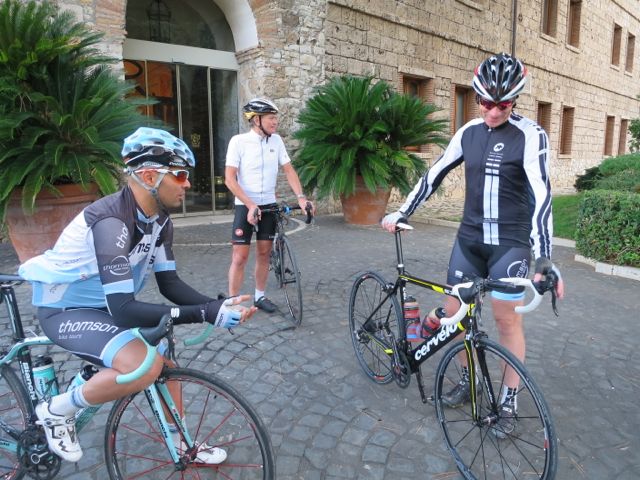 Our Dutch rider, Joroen, warned me never to buy a French car. “Out of a 30 hour work week, they are on strike for 13 hours.” he explained. “They spend the next 14 hours drinking wine, and in the remaining three hours (when they are terribly drunk), they build your car.” 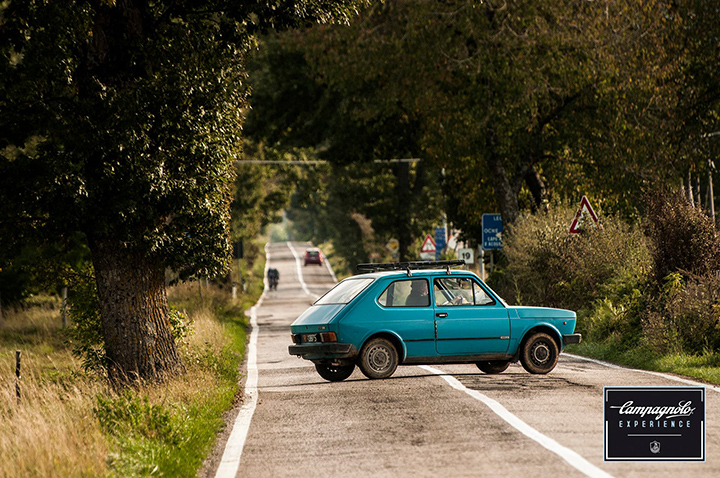 Of course it is all in good fun, the kind of ribbing only close siblings can get away with.

With the granfondo behind us, I was looking forward to getting out of Rome for a smaller, more relaxed ride. Or as relaxed as a 190km ride with a massive amount of climbing can be. After about 100km, our major climb of the day would be Monte Terminillo, which starts at about 400 meters (1,300 feet) and rises to about 1,900 meters (6,200 feet).

The ride out of Tivoli took us into the foothills of the Apennine mountains, where we rode though countless little mountain villages intermittently perched on peaks and nestled in valleys. 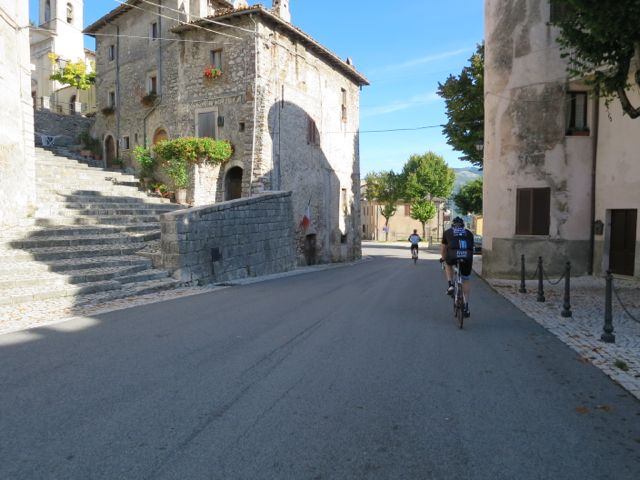 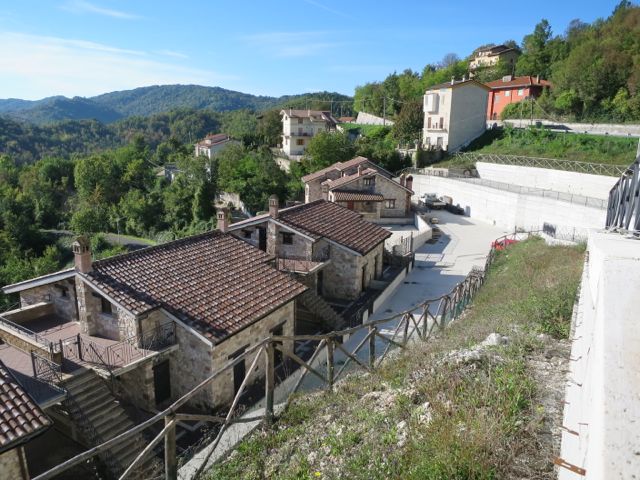 Every so often we would stop and regroup, fill water bottles, and stuff food into our mouths to fuel the next hour or two of riding. Finding places to pee is a bit of a challenge here, and I’m sure I have tinkled in some places that were less private than they could have been. My socks are a mess, covered with burrs, crushed wild raspberries, and mud – among other, less savoury things I’m sure. 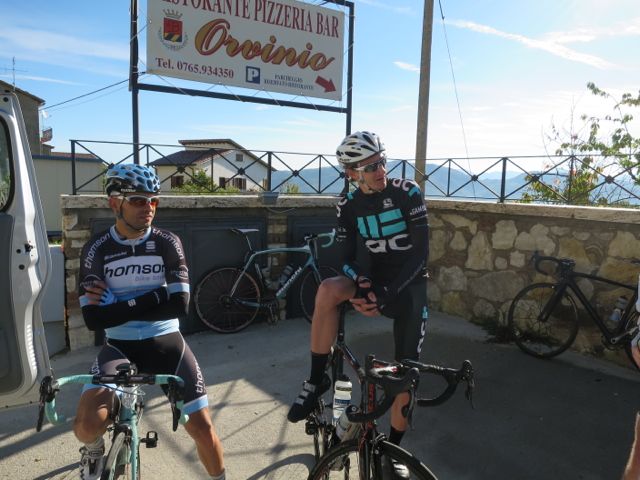 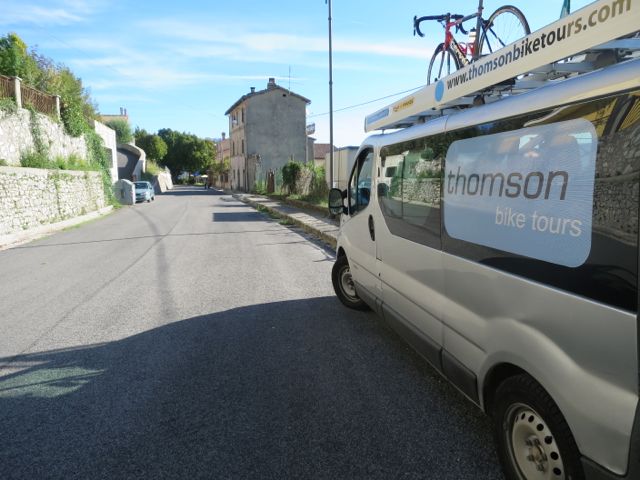 The farther we got away from the city, the prettier it became. We passed an impossibly beautiful turquoise lake, surrounded by a long and twisting road that was fast and fun to ride, especially after some slower, steep sections of climbing. The flatlanders among us were in heaven.

So amazing. The road to Headingly back home will never quite look the same again.

After about 70km we stopped for lunch in Rieti, the town at the base of Terminillo. Each town we pass through seems to have a trattoria, bakery, pizzeria or café on every corner. The food (if they have any left) is always delicious and a nice change from the sickly sweet gels and energy bars we eat on the road. 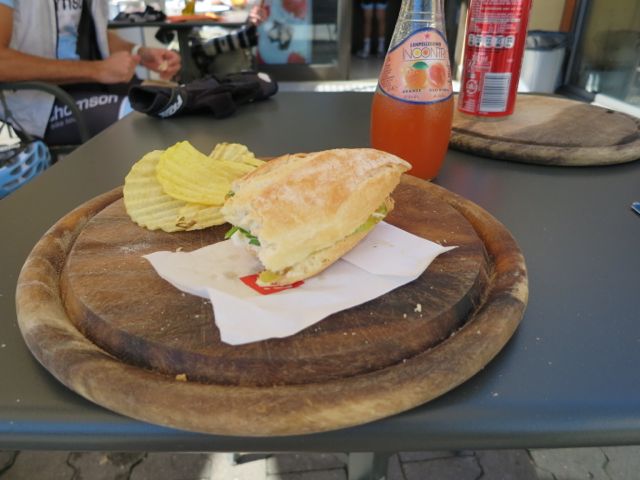 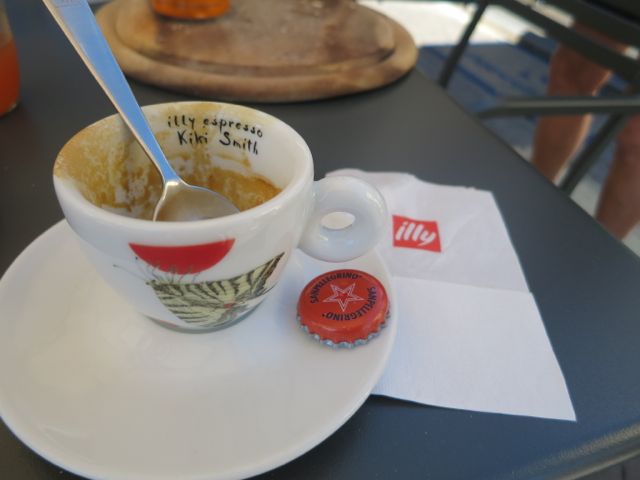 With lunch finished, it’s time to face the Terminator. The climb takes about an hour and a half – less time than Mount Lemmon in Tucson, and about the same in terms of grade. Of course there are some nasty little steep sections, but we won’t talk about those. 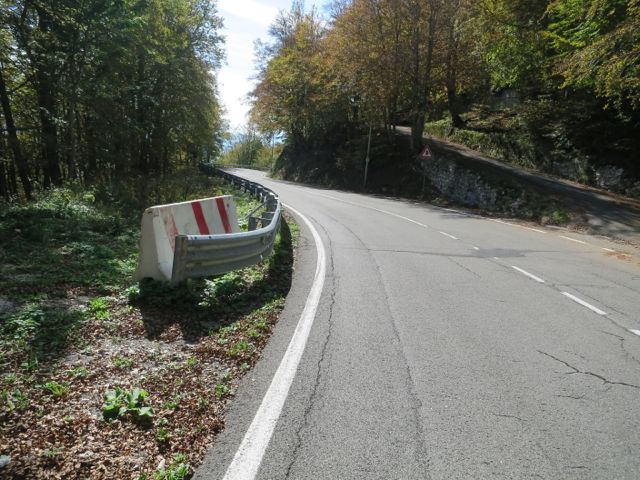 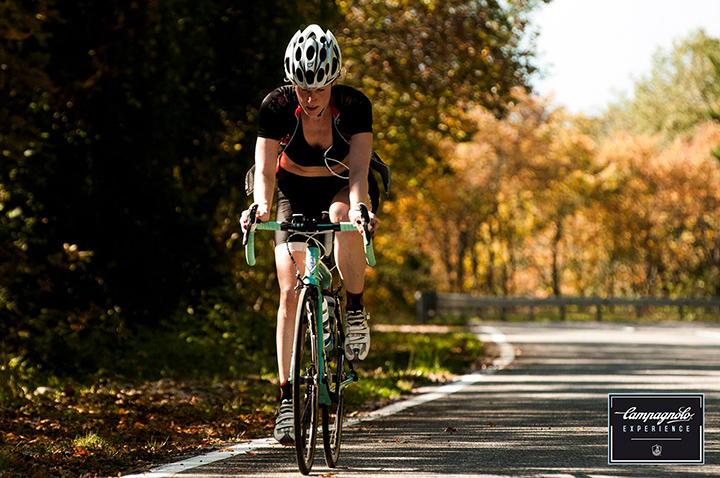 You can’t see it in this picture, but my “climbing vein” – the “Y” shaped one that pops out of my forehead when I exert myself – is out in full blazing glory.

The temperature got cooler and cooler as we climbed, and at the top was downright freezing. But I didn’t care – I had made it to the top and the remainder of the ride (with the exception of one little “bump”, as Sergi likes to call them) was downhill. 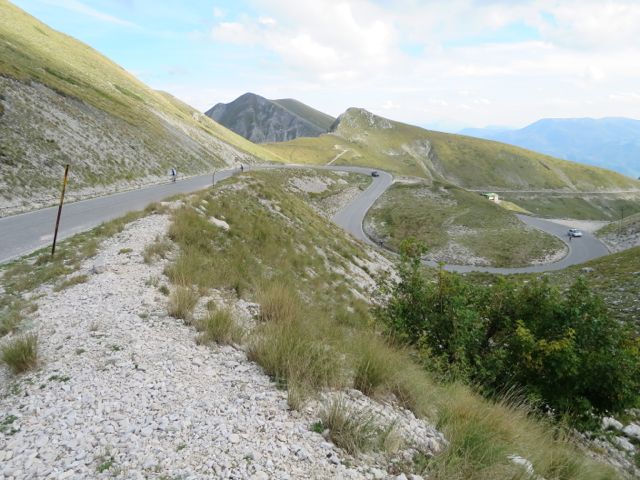 There was a bit of a scary moment on the descent when I hit a pothole and immediately and violently punctured both front and back tubes. Thankfully a) it was on a relatively straight section so I was able to stay upright, and b) Big Aussie Mike was with me and was able to show me how the Campy brake releases work, and c) my fabulous Spanish domestique Jordi (who magically appears every time I am in trouble) drove up with the van and quickly changed both flats. 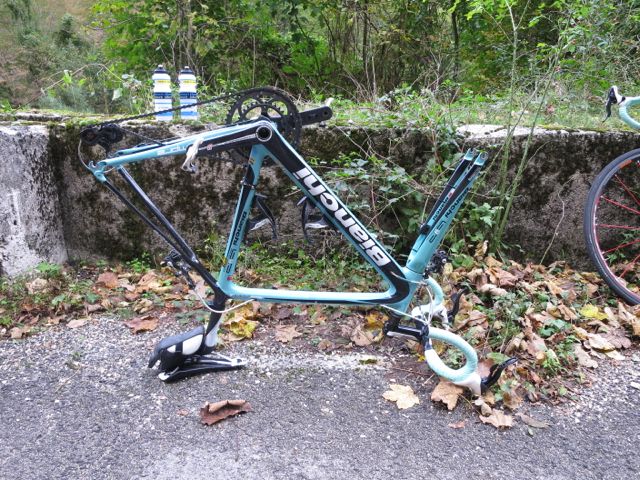 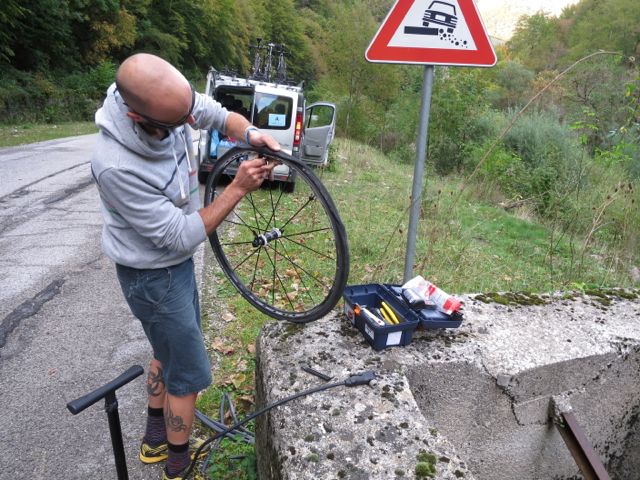 And of course the paparazzi was there to capture the whole thing. 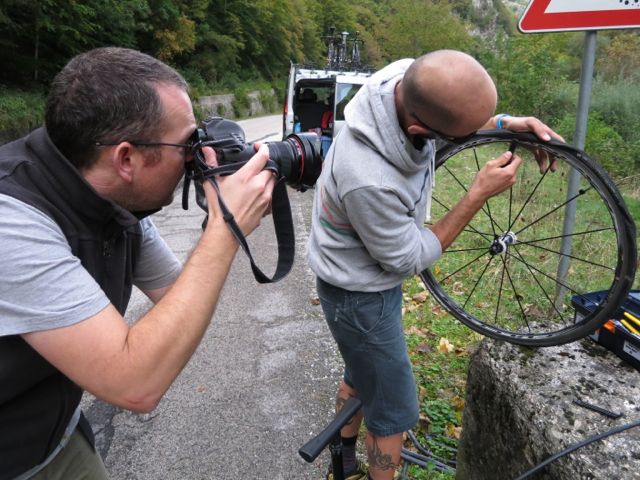 The next 60km to Norcia was a bit of a grind after the effort of the climb – not to mention yesterday’s granfondo. A pre-shower beer and a bag of nice salty chips at the hotel bar was a perfect way to end the ride. 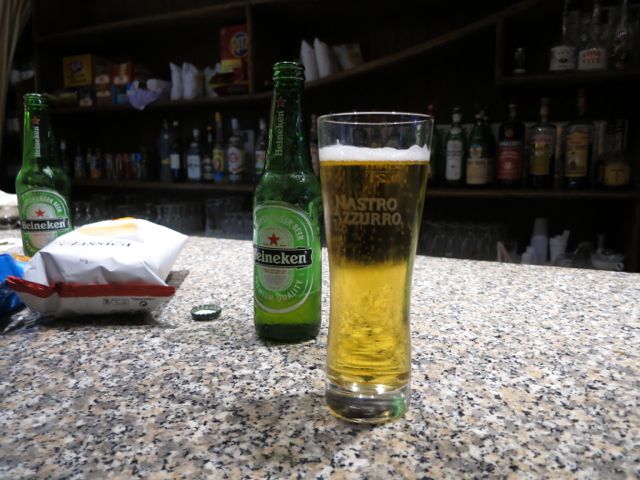 Moments like this are as brief as they are rare. With Thomson, there is no fucking around when it comes to our schedule. It is late, and we have to clean ourselves up and get to dinner before it’s too late. There’s another move in the morning, and another big day ahead. We enjoy the  walk to dinner, if not the stairs we encounter along the way. As always, there are amazing sights to be seen, followed by a recap of an unforgettable day over an unforgettable meal. 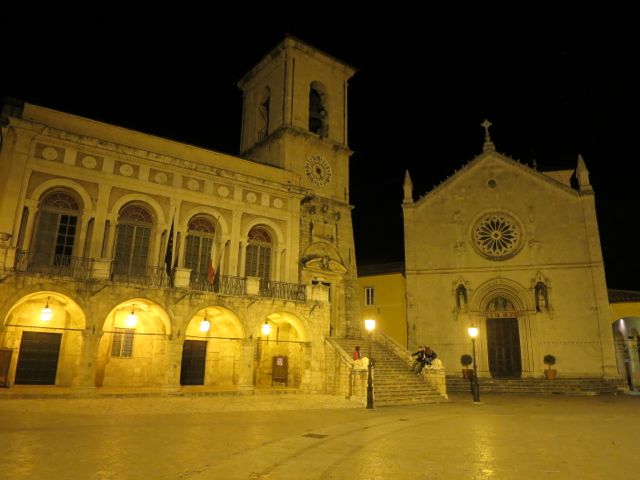 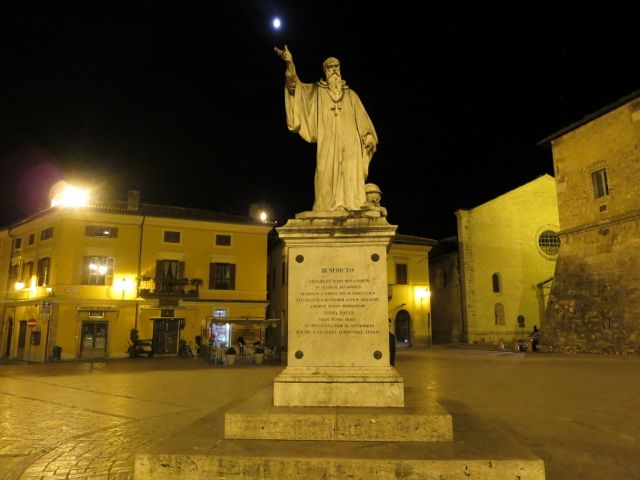 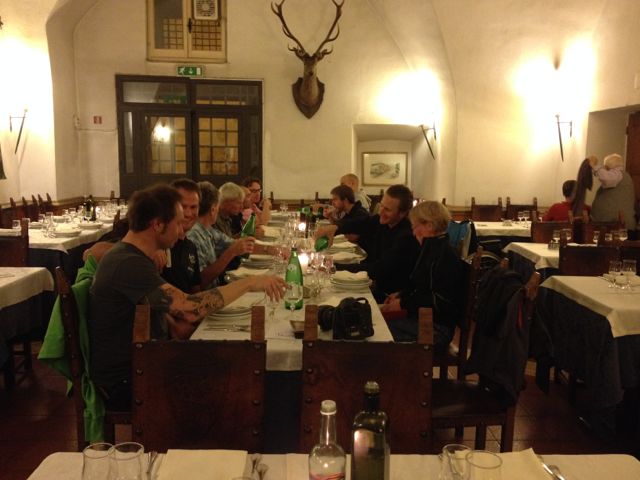