DarkCross: The Greatest Show on Dirt 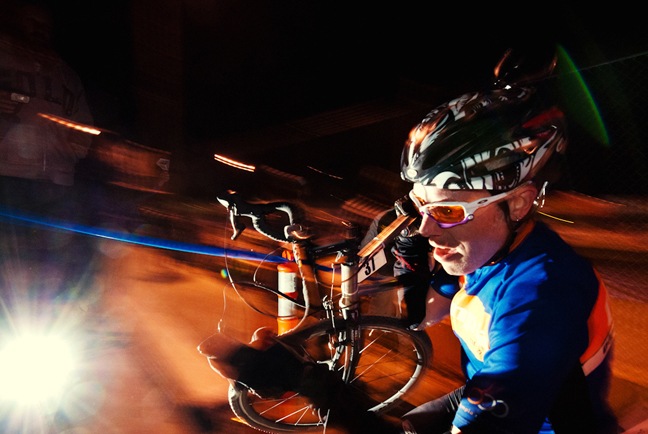 If you can measure the afterglow of a great night by the number of post-rumpus cigarettes, I think I’ve vicariously smoked the better part of a carton by now. I am rarely at a loss for words, but when it comes to DarkCross, it’s hard to even know where to start.

So rather than lulling you all to sleep with a rambling (yet clever and witty) account of the event, I figured a simple list of my top ten favourite things would do just as well, even though the math required the removal of my mittens.

With all apologies to Mr. Letterman and his crackerjack team of lawyers, I am pleased as all get-out to present (in no particular order): 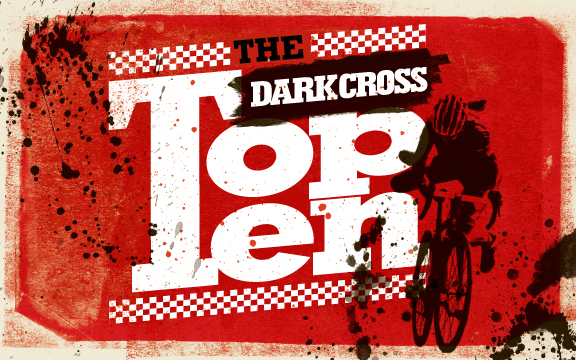 # 10. The Qualico Flyover
Towering at the Speedway entrance like gallows, this beautiful behemoth would be the joy of many and the curse of the rest of us who needed to be talked off the ledge and given a good cuddle. Most of us had never seen a flyover, much less ridden one, but once you got the hang of it, it was hard to suppress the occasional “weeeee!!!” 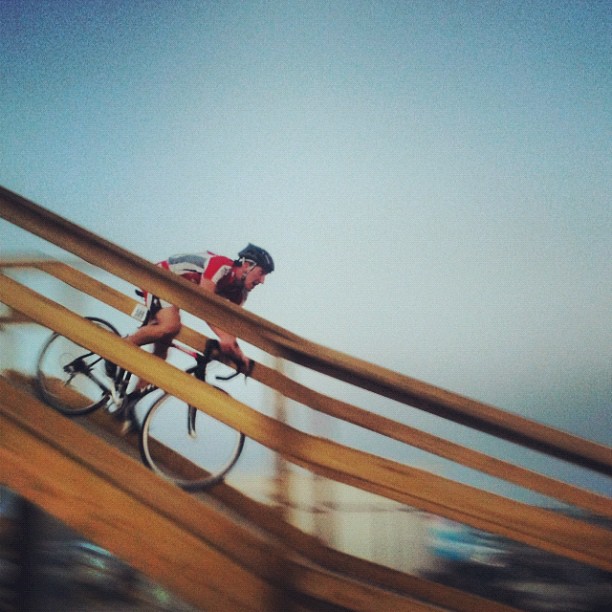 #9. The Sweet, Sweet Sound of Steve Scoles
Quite possibly the sweetest race announcer in the world, Steve took the already electric atmosphere of the evening, wrapped it in dynamite, and sent it out partying with Lindsay Lohan. Poor Steve was hoarse by the end of the night, and Don Sawatsky will be known as “The Cagey Veteran” until the end of days. 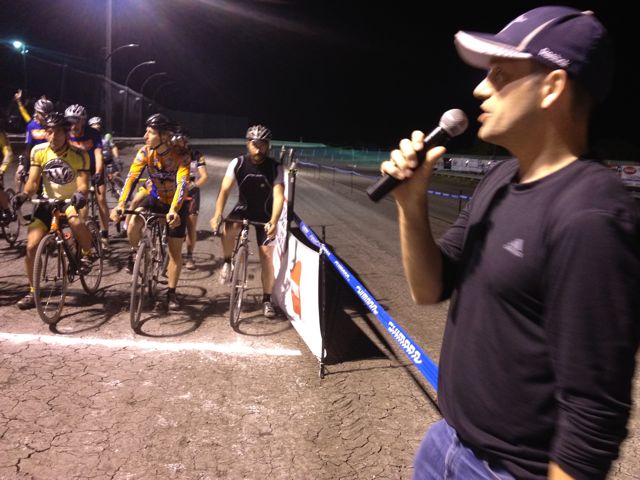 #8. Tomek & The Kiddies
If you ever have the opportunity of supervising large numbers of children with a Polish anarchist, do it. During the kids’ race I was charged with helping the tykes heave their bikes over the course barricades. Tomek came to keep me company and lend a welcome hand, taking every opportunity to scold sheepish parents about the fact that their fancy carbon bikes weigh a fraction of what their kids’ bikes do. 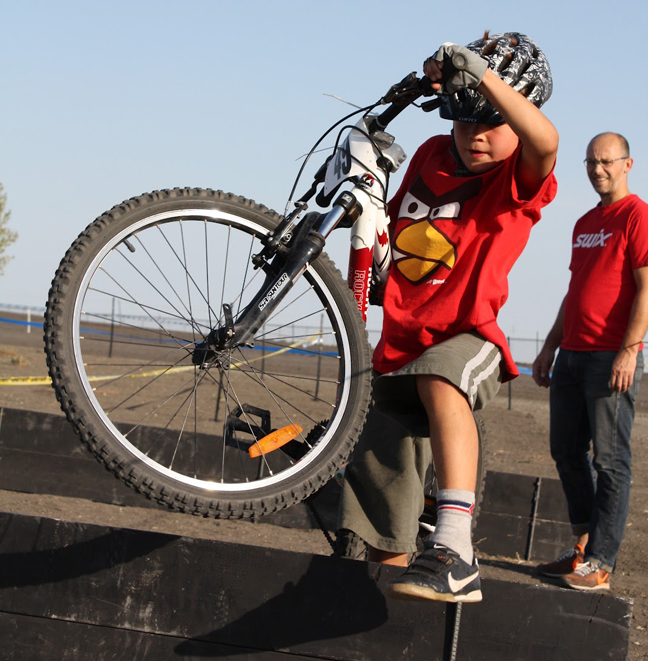 #7. A Fleeting Moment of Stardom
A big highlight of my night was being recognized by the four people who read this blog that aren’t related to me. Thanks for making me feel like a rockstar, minus the cocaine addiction and gonorrhea.

#6. The Vibrating Beds & DJ Riddim
Speaking of rockstars, the Vibrating Beds were as amazing as I expected, both on stage and (as their name would suggest) in bed. They rocked the place in between races, while DJ Riddim (otherwise known as Adrian Alphonso) treated us to a wild and wonderful mix of reggae and other tunage I am not nearly cool enough to identify by name or genre. 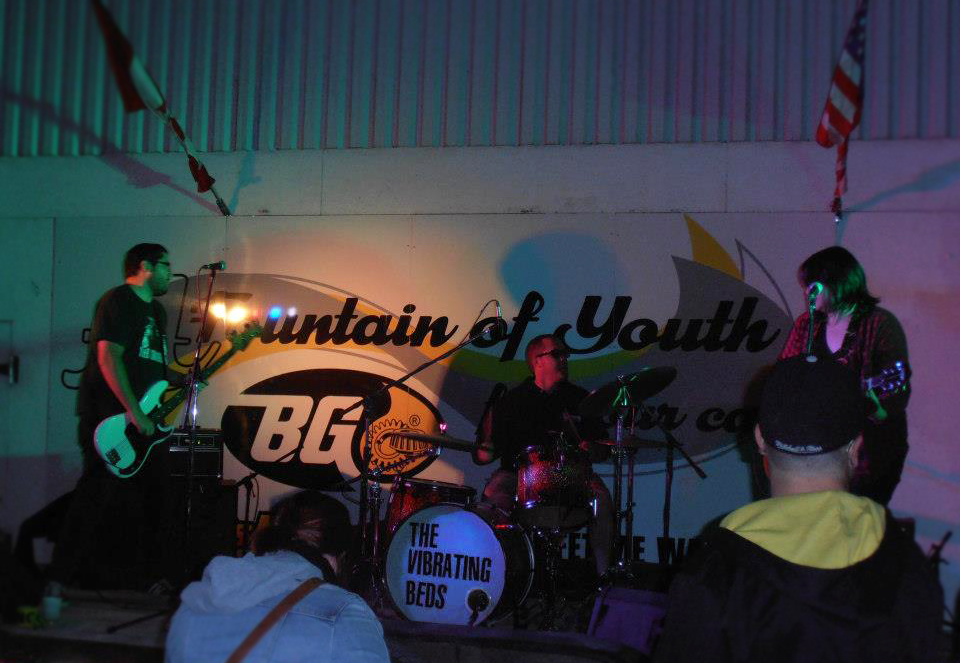 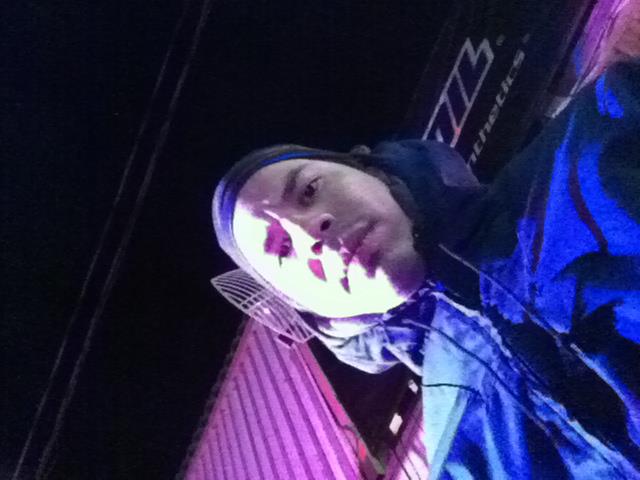 #5. The Return of the Wallace and Wallace Grandstand Run-Up
What started out as a bit of a sketchy idea has turned into probably the most beloved (and most painful) feature of the DarkCross course. As a spectator, it is at this point in the course you can tell your favourite racers exactly how much they suck while you take their picture. As a racer, you are blinded by camera flashes whilst being told how much you suck. I can tell you from personal experience that both are pretty freaking awesome. 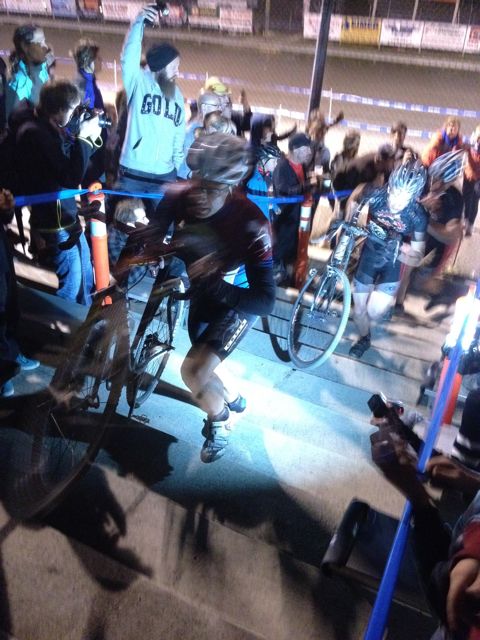 #4. The Podium
Or to be more specific, standing on the podium. It’s not often (or ever) I get to stand beside someone like Anna Schappert. In addition to sporting The Sweetest Jersey in the World, Ana spends her “off season” riding a mountain bike for Trek Red Truck Racing Team. The other lady I had the honour of standing with is the lovely Mrs. G., rounding off a very dark and sexy podium shot indeed. Anna must have been very tired after the race, because although she is on the top step of the podium, she does not appear to be standing up. 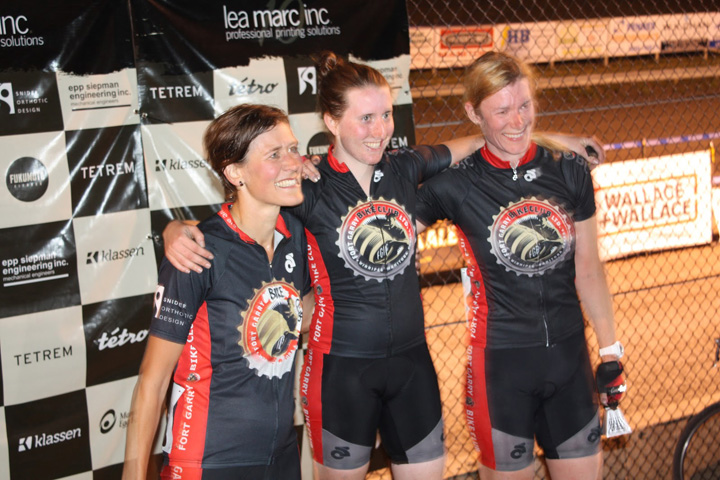 #3. The Dark
There is something about the dark that makes racing feel even crazier and more dramatic than it already is. Although the darkness makes taking decent pictures a bit of a challenge, it is quite slimming and does a good job of hiding the snot and vomit. We’ve often thought the addition of burning cars or oil drums would add even more drama to DarkCross, but apparently the local fire authorities are a little prudish about such things. Really, what could possibly go wrong? 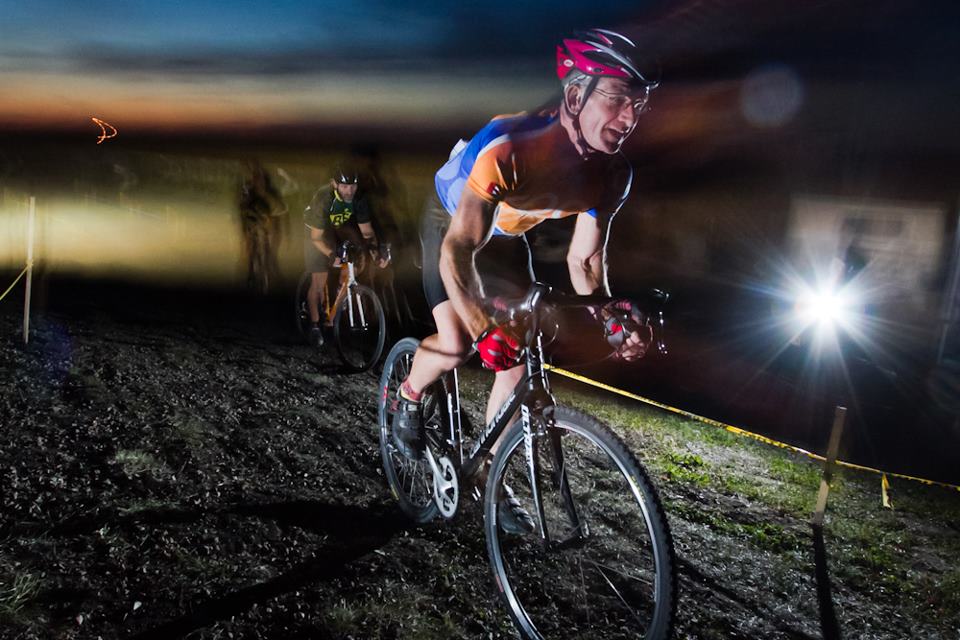 #2. The “Effin’ A!” Race
From David Coughlin’s fantastic balls-out sprint to win the first lap prime, to the six man break that was finally destroyed by Don Sawatsky’s incredible attack in the final lap – the men’s A race had more excitement in 60 minutes than this year’s Tour de France did in 21 days. Ok, that may not be saying much, but trust me, it was pretty damn exciting. 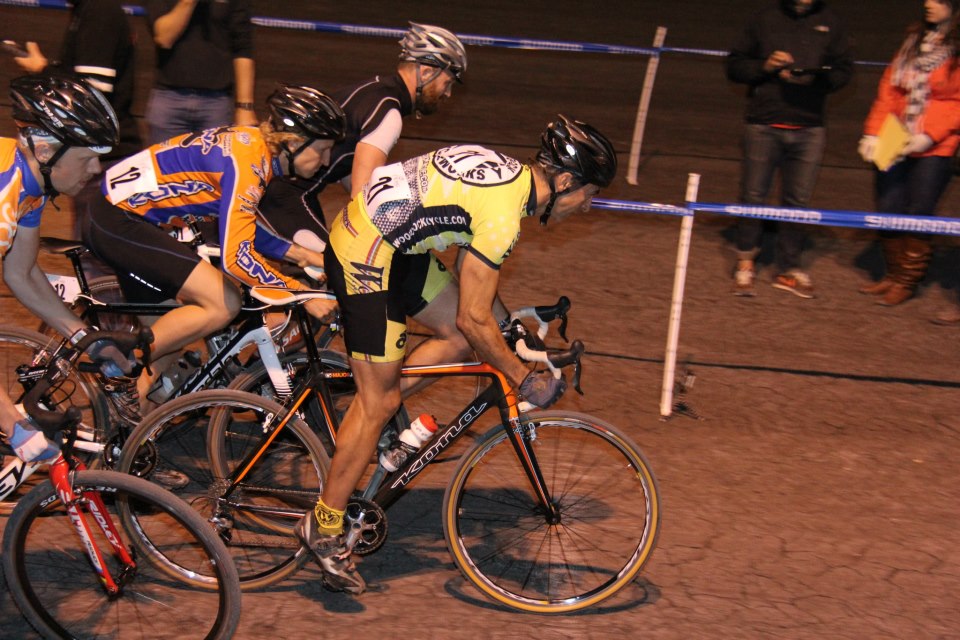 #1. The Spectacle – For those Who Like to Watch
I challenge anyone to find a sport that is more interactive, beautiful and exciting for the fans than cyclocross. I suppose if you gave ballet dancers hockey sticks and got to watch and taunt them with your seat directly on the ice surface you might get close. Turn out the lights and add some Nascar and you’ve got DarkCross. At the end of the night, I’m not sure what hurt more, my butt (from racing) or my throat (from heckling). 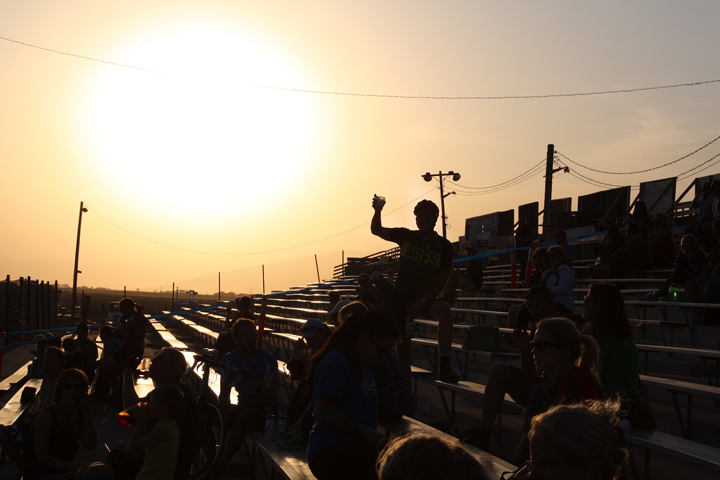 So there you have it. Of course there were many other awesome things – like running back and forth between the run up and the flyover, or doing Jagermeister shots at the finshline. But you know what the best part is? The season has just begun.

Be sure to check out the sweet new course (and another sweet poster by Tétro Design) at The Republic of Manitobah race this Saturday in Portage la Prairie, hosted by the Junk Yard Dogs.  See you at the races!

Thanks to Mark Reimer, Jon Millions, the ABES, Dave Bell, Stefan Isfeld, Kellea Thomson, and Adrian Alphonso for the photos. Roll over each shot to see who took what.