Cavendish vs. UCI: The Battle of the Brands 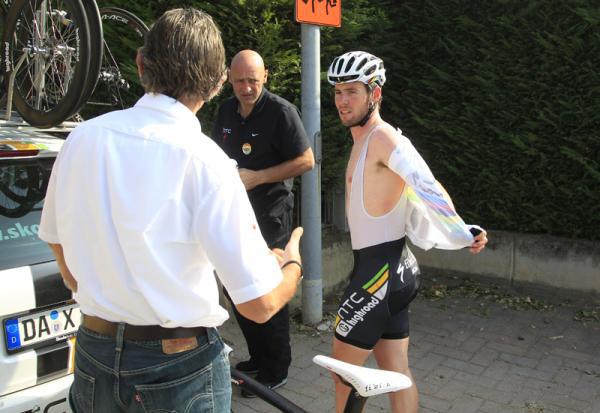 Mark Cavedish is a bit pissy these days about his shorts.

I first became aware that something was amiss when my EuroSnob Facebook peeps were in a tizzy over the following photos showing The Man from the Isle of Man sporting black bibs with his newly pillaged World Champion jersey. Apparently, proper WC protocol is to wear white shorts to match the white jersey. (I have previously  demonstrated why black cycling shorts are generally best, so I’ll move on). 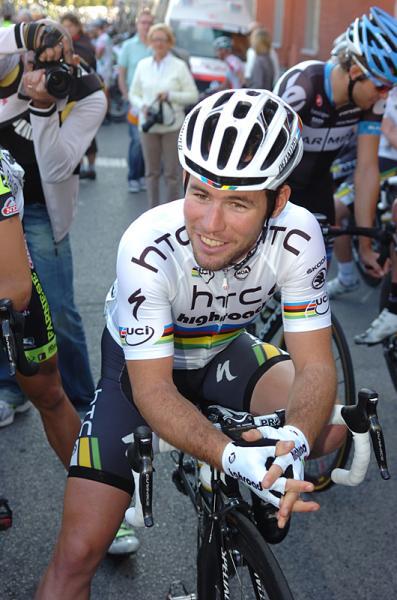 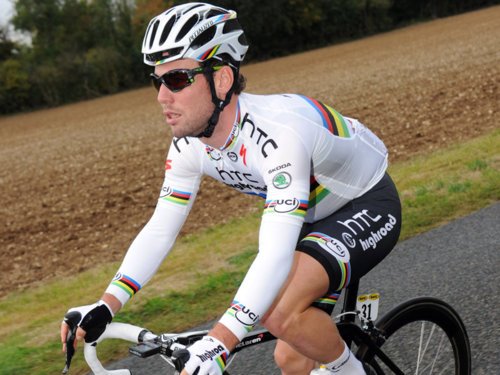 They were also quite dismayed by the HCT team’s handling of the jersey itself, someone commenting “They’ve had a fortnight to design and make a jersey that would, oh I don’t know, actually have the bands going all the way ’round. This comes across as if they suddenly remembered he was World Champion on Friday evening and rushed it through.”

Hear hear! Everybody knows that a fortnight is plenty of time to design and make a kick-ass jersey for the World Champion. Especially with bands that go all the way ’round. Perhaps Team Sky will get it right.

Personally, my tail feathers were more ruffled by his abhorrent sock/shoe combination. 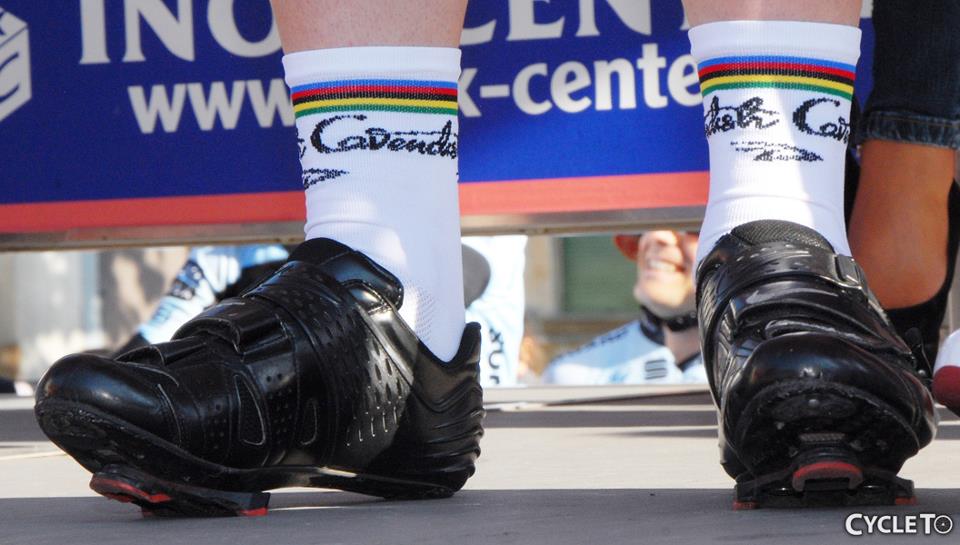 It’s my own personal hang up, but this is an awful look – a fashion crime right up there with dress socks and sandals. Or dress shoes and sweat socks, as the case may be. I believe in civilized company, one’s socks should always match one’s shoes. White shoes – white socks. Black shoes – black socks. And so on. But I digress.

Here’s where it gets interesting. It seems The Facebook EuroSnobs aren’t the only ones who have a problem with Cav’s tacky black shorts. The UCI (the governing body of the cycling universe) has decreed that the black shorts have to go, and be replaced posthaste with white ones.

You see, in addition to laying down such mundane laws as wearing a helmet during sanctioned races, the UCI is the keeper and regulator of many historic cycling “brands”, including that of the World Championships. Being both a cycling nut and a purveyor of brands and the standards by which they must be maintained, I needed to know what the specific standards are for the World Champion brand, and if in fact Mr. Cavendish and his tacky black shorts were in violation of them. I found the document without much trouble, and it is as boring and anal-retentive as I expected. 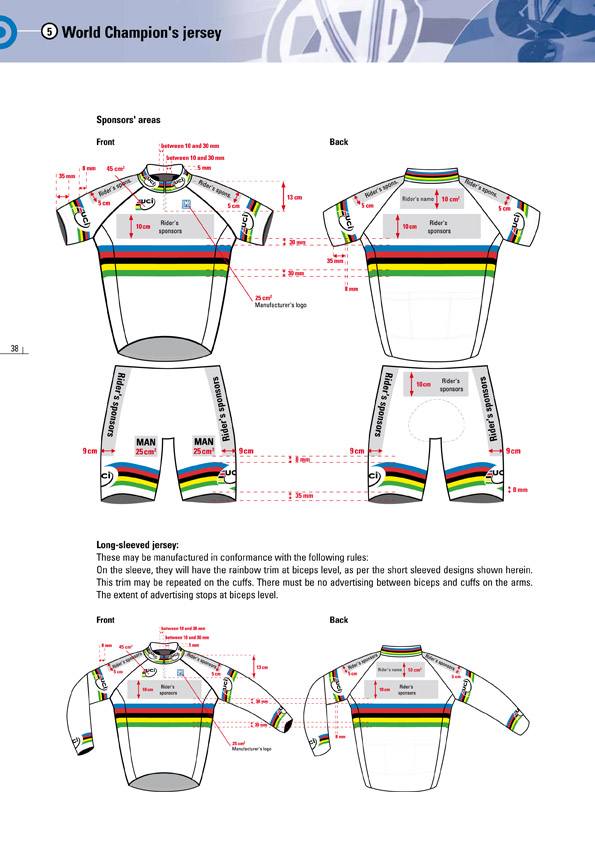 This is only one of seven pages that cover in excruciating detail how the World Champion garments are to be designed – including those worn by road and time trial World Champions, junior World Champions, past World Champions, as well as the spouses, offspring and house pets of World Champions. The basics are: a white jersey with stripes in specific Pantone colours, of a specific size, order and distance from one another, specifically placed on everything the World Champions wear for an entire year. Even their underpants would have standards, if they wore any. And like it or not, the rules are there for a reason. Imagine what the teams would do if left to their own devices. 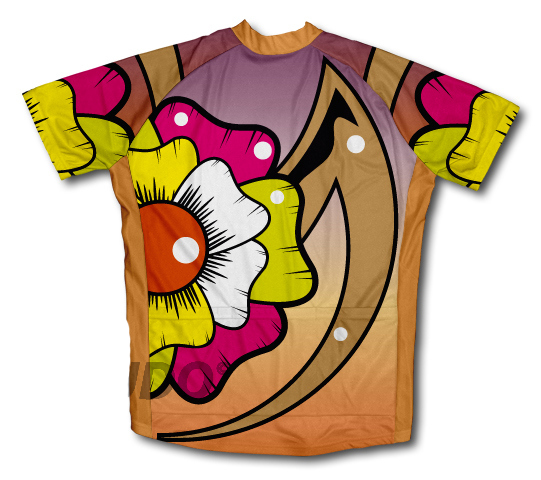 It was difficult, but I did eventually find the section about shorts. It reads: “The wearer of the World Champion jersey is entitled to match the colour of his shorts to the colour of the jersey.” That’s it. Now perhaps in the Land of Europe things are different, but I take the word “entitled” to imply the wearer has a choice. But hey, this is the UCI, and even half of one of their lawyers is twice as smart as me.

Cavendish voiced his outrage in the following Twitter Tantrum:

The UCI is a brand (here I choose my words carefully) that is supposed to represent the professionalism and history of cycling. Mark Cavendish is also a brand, and as unreasonable as the UCI may appear, it’s their party, and if Cav’s not careful his brand is going to stand for spoiled pouty princesses who freak out anytime they don’t get their way.

So I started to wonder what the big deal was. Why is Cavendish making such a fuss about the colour of his dumb shorts? After some thoughtful consideration, I have come up with a few theories:

1) We are often influenced by our better halves in matters of fashion. The hubby and I always consult with each other before social engagements to ensure one of us doesn’t make the other look stupid by wearing something ridiculous. So perhaps Cav’s (other) girlfriend, the buxom and usually topless model Peta Todd has suggested she prefers the black shorts. Although I would have to question the likelihood of this theory since getting clothing advice from someone who rarely wears any is kind of like getting tips for a good steakhouse from a vegan. 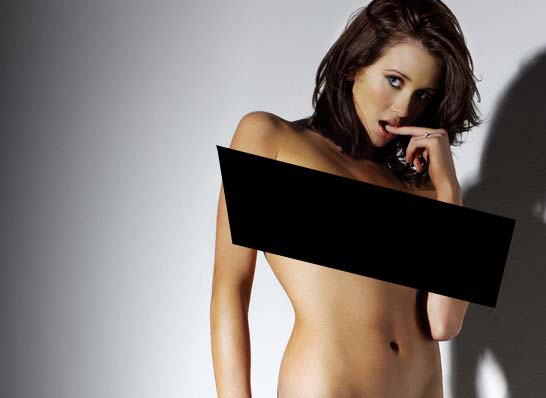 Mind you, I’m sure she can be quite persuasive.

2) Maybe he is merely steadfastly observing the old  No White Pants After Labour Day rule, in which case someone should inform the poor man that that rule is SO last Wednesday. (While they’re at it, they can let him know that while his socks need to match his shoes, his belt and purse do not.)

3) Given the inherent revealing nature of tight white shorts, there is also the possibility that the Manx Missile is self-conscious about his Man Missile and afraid he won’t measure up to The Mighty THOR. This is far from impossible. 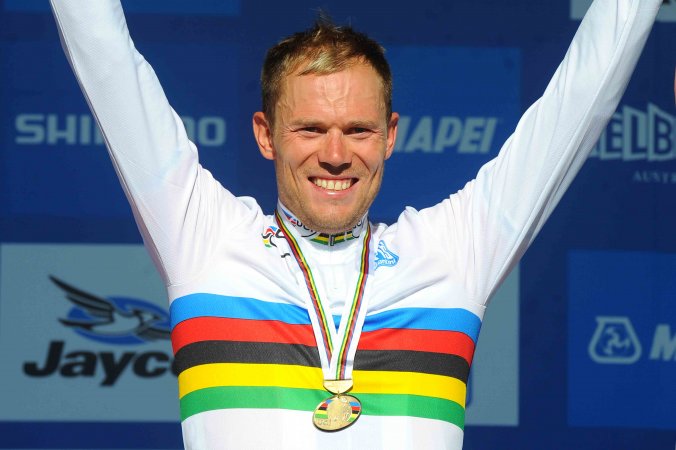 4) He has his period. This theory was offered by the lovely and sharp-witted Rachel (The Dark Lady) and was way too good not to include. It would also help explain his pissy mood.

My advice to Mr. Cavendish: man the fuck up and put on the white lycra rainbow shorts already.