Like most people, when I’m not riding around in a lycra skin suit with a picture of a chicken on the back, I have a real job. In addition to fulfilling its primary purpose of providing the means to purchase more bikes and associated items, I usually enjoy it. Much to my Dear Old Dad’s initial chagrin, my career path led straight and unerringly to graphic design (but only after I learned that you have to be born a princess). Graphic designers typically produce logos, brochures, books, posters, and other two dimensional items, a startlingly good match to my personality. So when I received an email from Jason Carter, the then President of the Manitoba Cycling Association about producing a video, I kind of ignored it, assuming I had been contacted by mistake. But a week later when I received a second, more firmly worded email, I decided I should pay attention.

Healthy Living, Seniors and Consumer Affairs, a department of our provincial government, along with the MCA, wanted to produce a video about bike helmets as part of the Can-Bike program. Specifically, they wanted to make a video that would get 15-25 year olds to wear them. 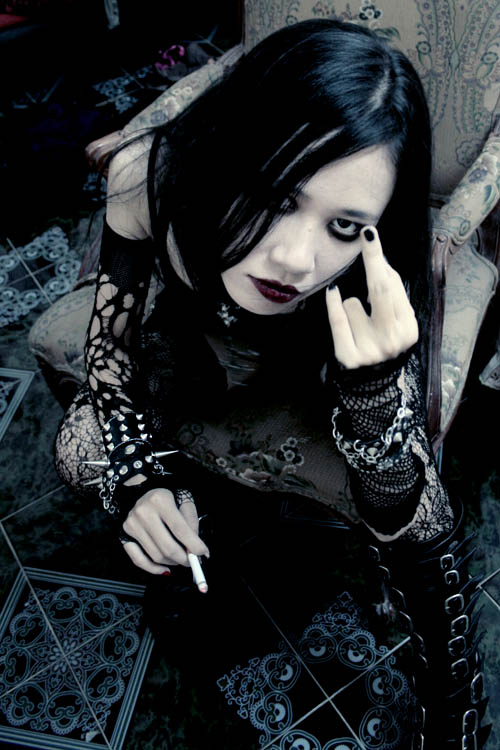 Haha! Good luck! Marketing people know it is difficult to impossible to affect the behaviour of that particular demographic. They think they know everything. And they certainly know that marketing people are stupid.

That said, it sounded like an interesting challenge, and was an actual paying gig, so I took the job. Based on lots of meetings and research I set to work writing the script, then did what any smart business person does when faced with a new challenge and I placed a desperate call for help to people who actually know what they are doing. Those people were a young and talented local video company called Handcraft Creative. 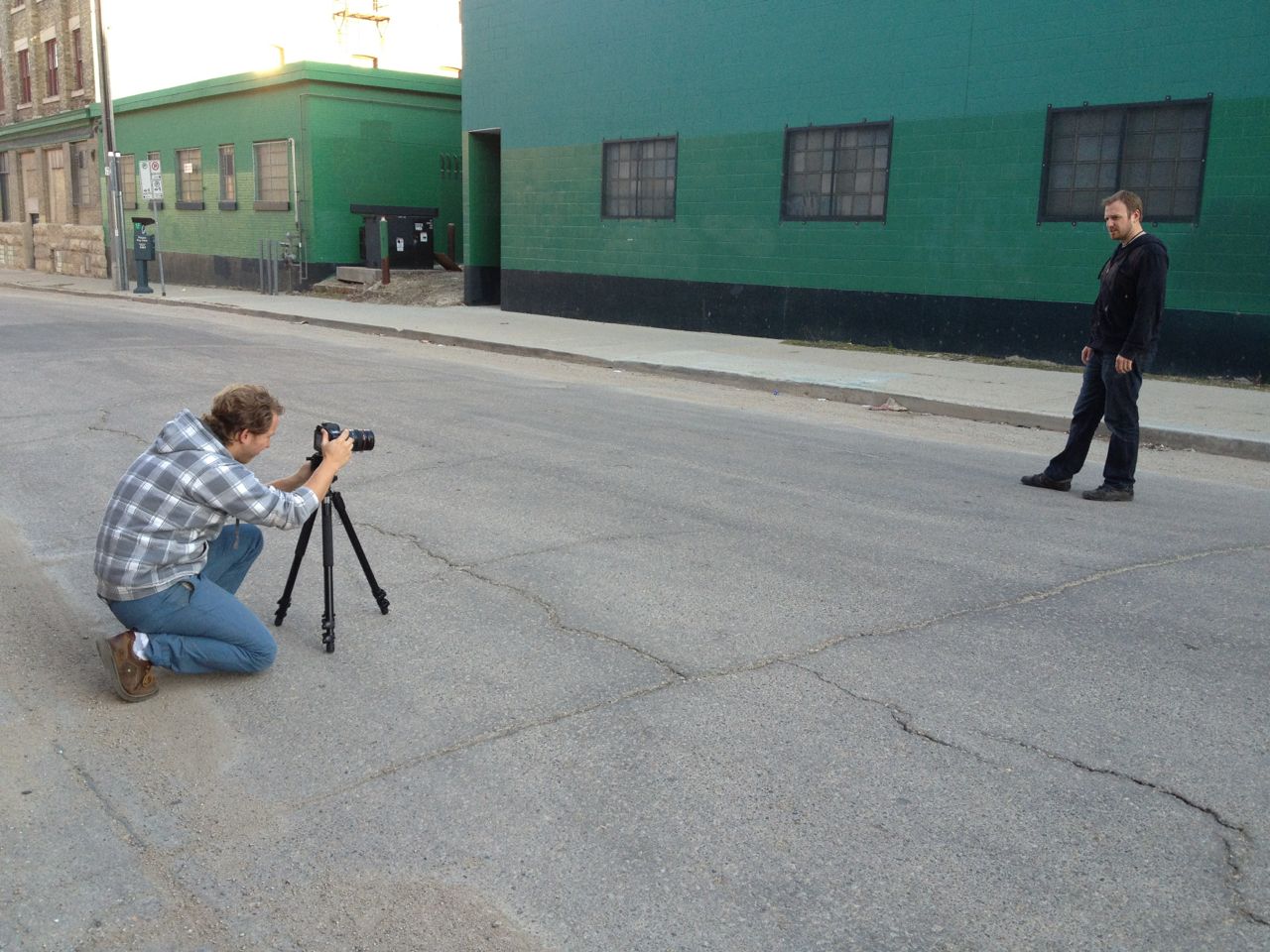 The video (which, incidentally, was made last summer – well before helmet legislation for kids was even announced) isn’t meant to sell helmets, or to scare people into wearing one. It’s meant to teach people what to look for when buying one and how to wear it properly without boring them to tears. We used humour to help make the messages memorable, while harkening back to the old-style public safety videos from long before the film crew was even born. And we got Napoleon Dynamite to narrate.

Once the script was finalized, we needed some actors that could bring our vision to life. After some heavy negotiations with Coach Jay, we procured the services of some up and coming local talent, otherwise known as The Provincial Kids. 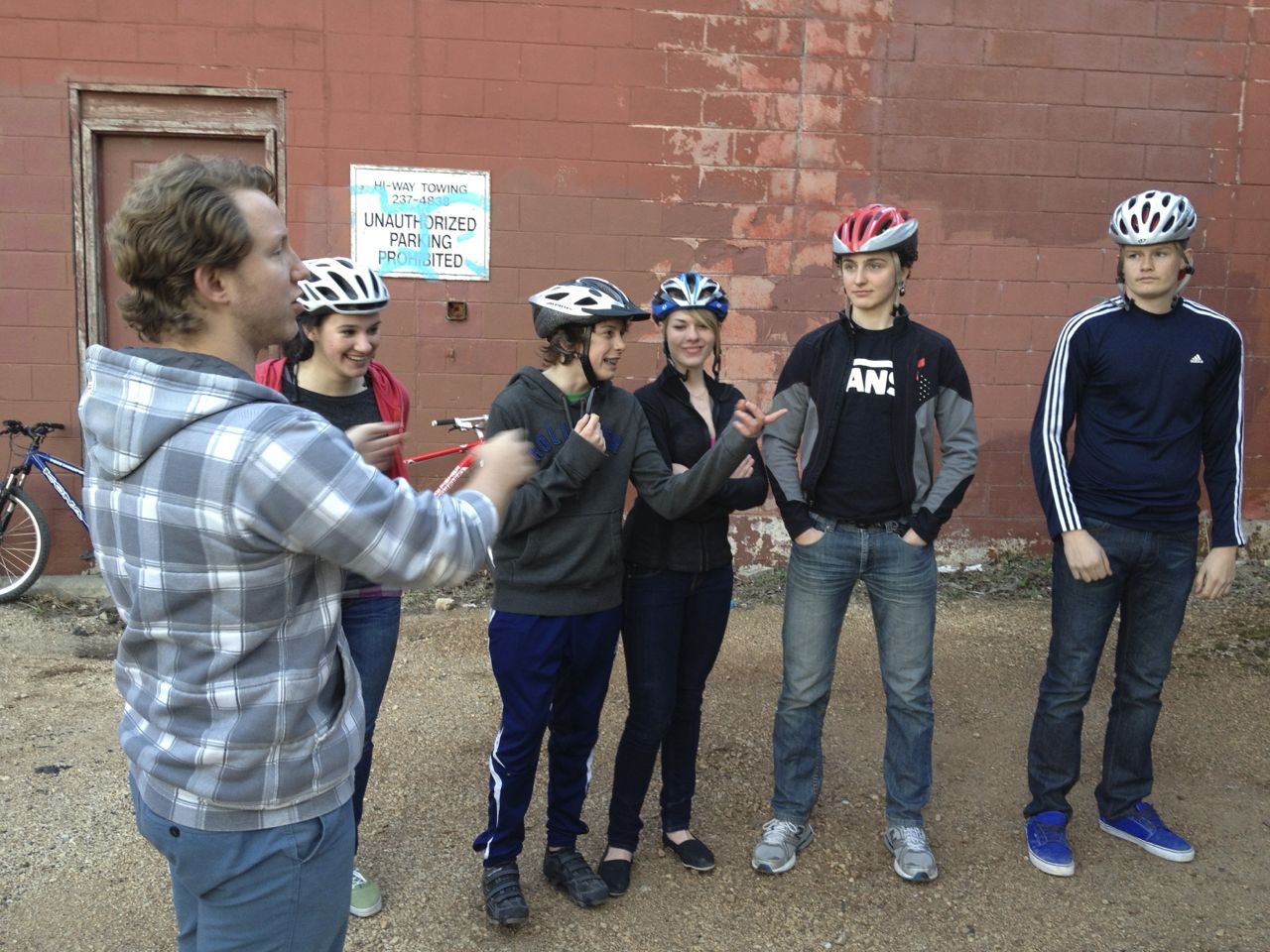 They fit our demographic, are very skilled bike riders, are ridiculously good looking, and most importantly, they work for free. Aaron, Jenna, Alex, Olli, Sebastian, Anna all got to experience the glamorous life of movie actors first hand.

First we whisked them off to a really sketchy area of town right before dark. Even the birds in this area are tough, as you can see by the grisly remains of this crow we found that were clearly left as a messages to all the other crows. 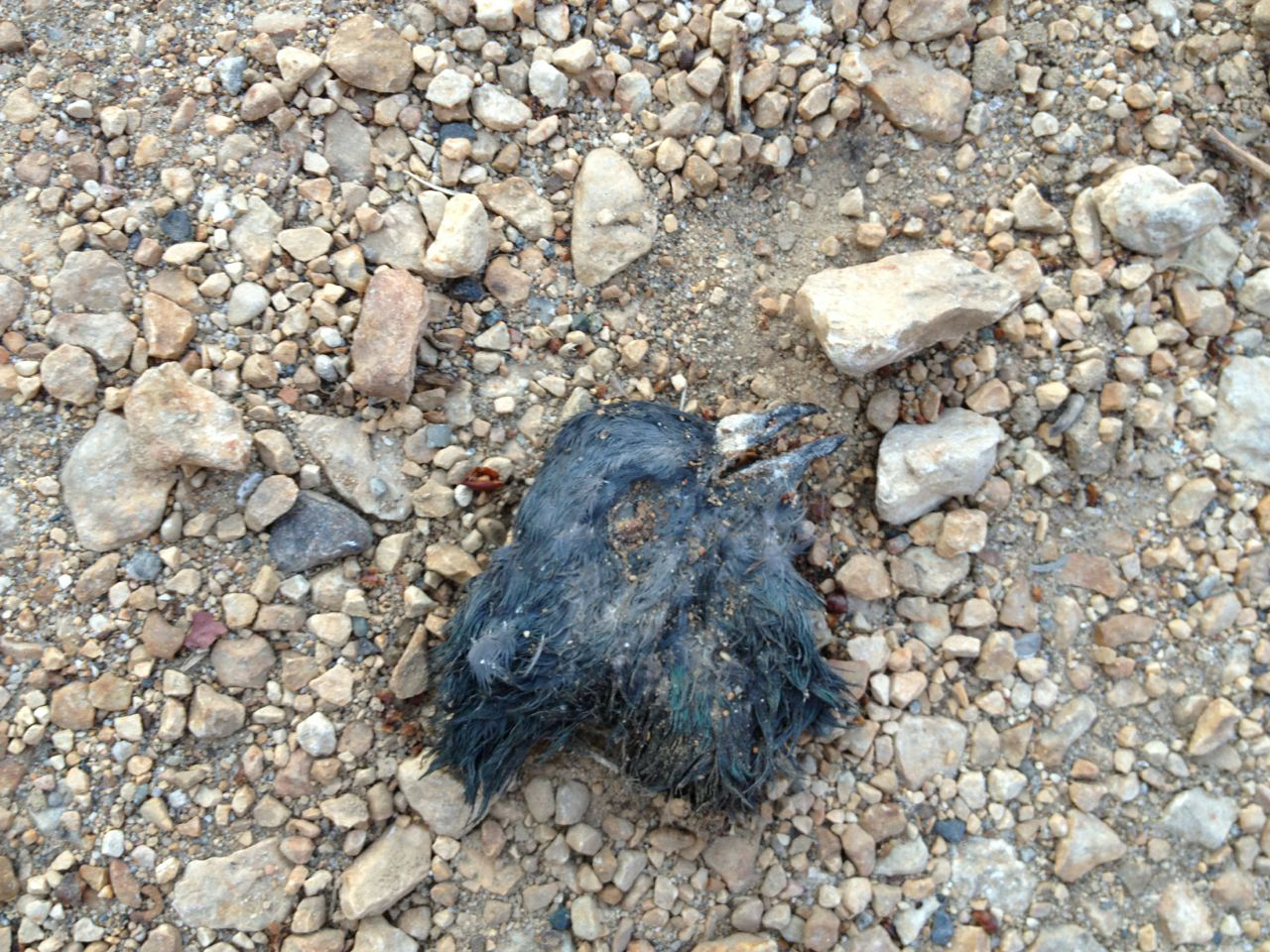 Making movies can be tedious, as the Kids discovered as we made them ride their bikes back and forth… 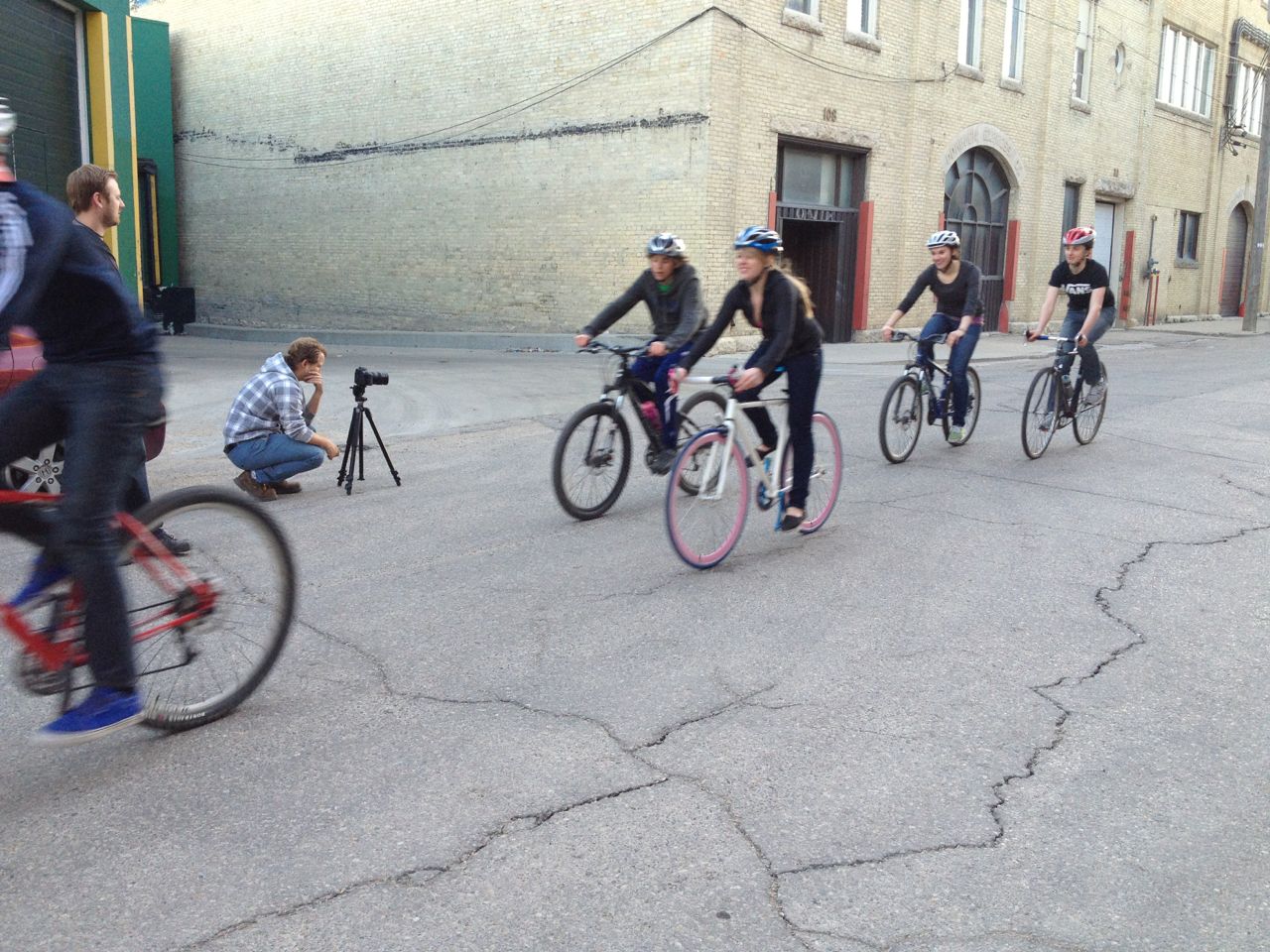 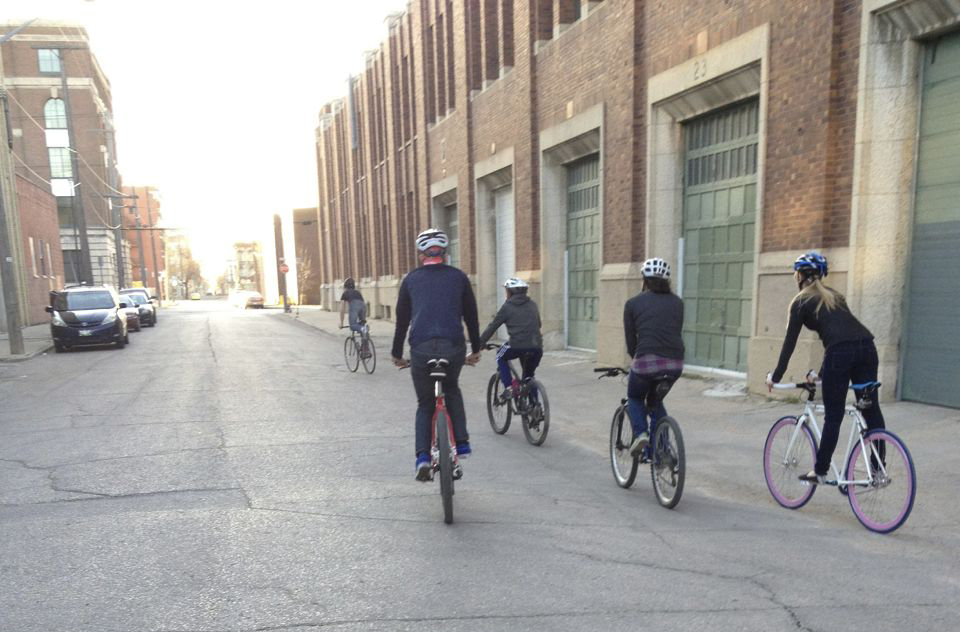 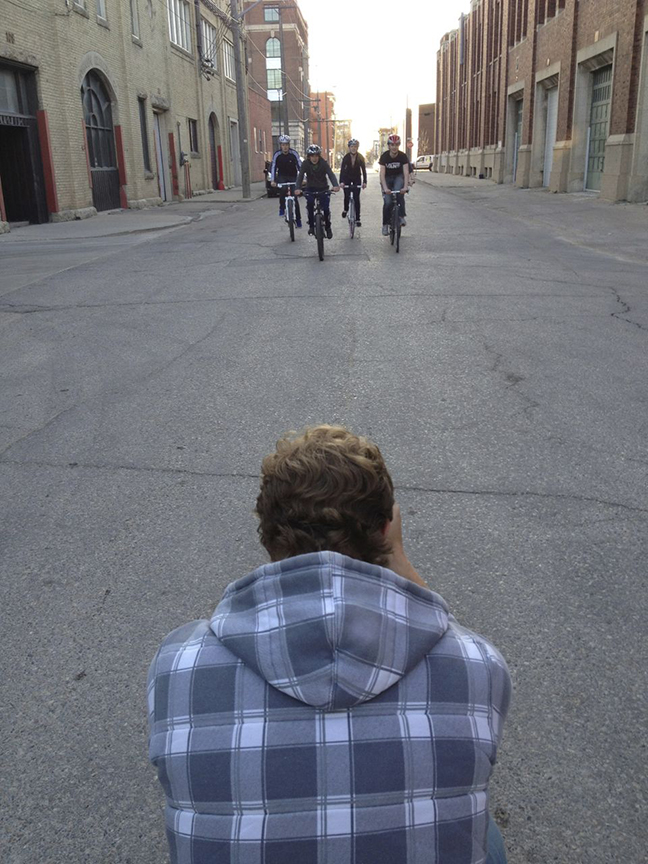 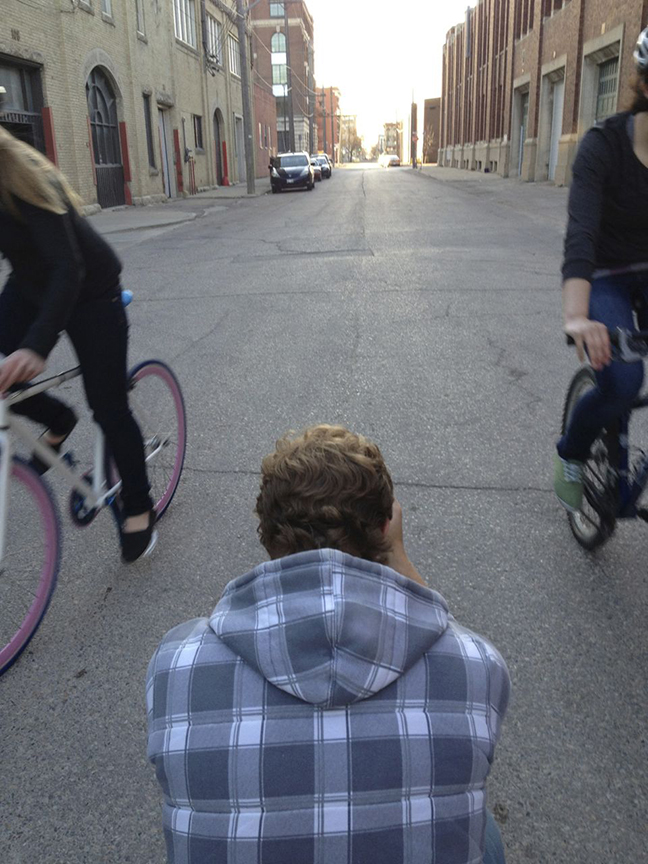 The kids worked very very hard and were the epitome of professionalism. In the meantime, I attended to some very important matters in my trailer. 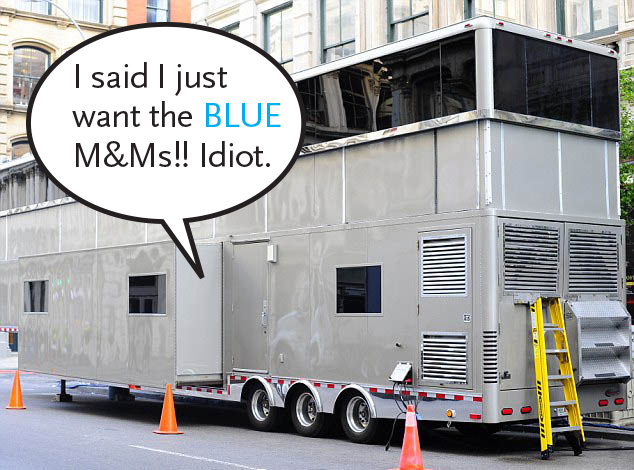 The style we were shooting in required the actors to hold completely still and expressionless  for long periods of time. This is tough, especially if you are happen to be a teenager surrounded  by your friends who are doing everything in their power to try and make you laugh. 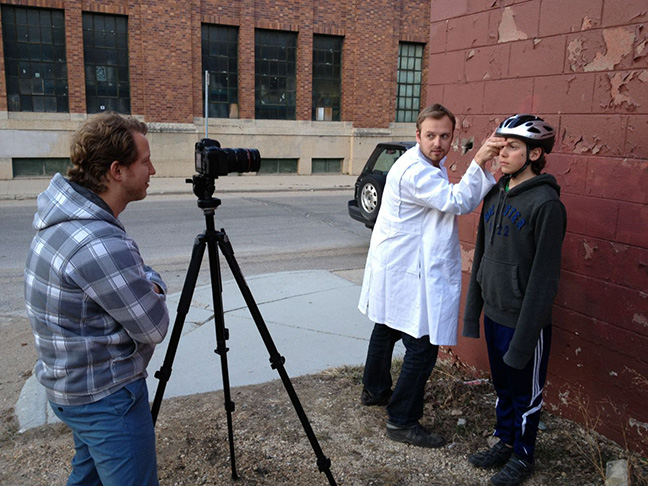 Our strategy to keep the actors in character was simple: Think about the dead crow.

Another obstacle we faced was the almost crippling shyness of some of our young actors. 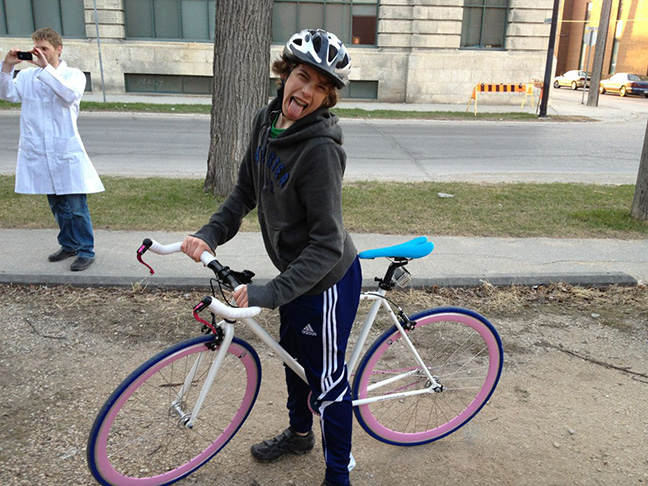 But we did our best.

Our second day of shooting brought us to LBS Alter Ego Sports, where the kids got to ditch school to cruise bike stuff and test drive a whole bunch of different helmets. 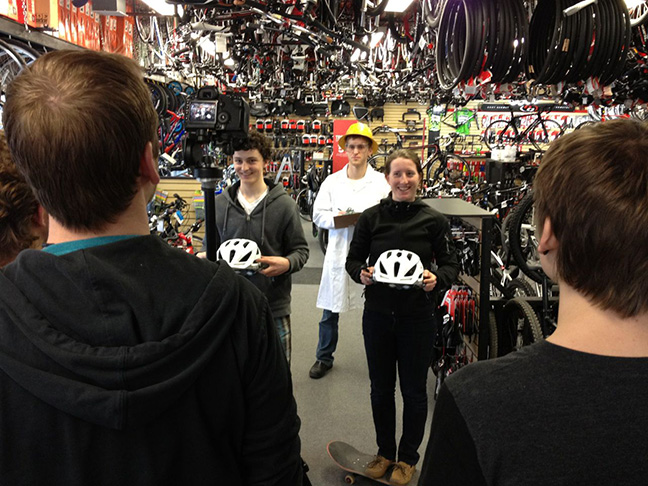 Bike Mechanic and closet thespian Dave Chennel stepped in to help. Dave impressed all of us with his natural ability to play a guy who works in a bike shop. 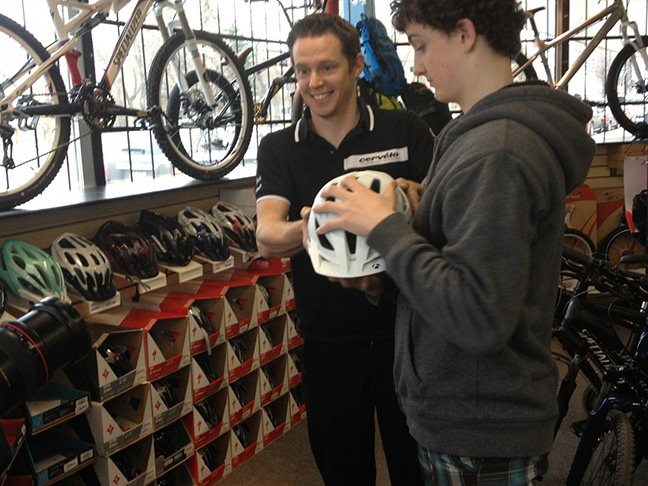 The crew worked really hard to get the final shots we needed to explain the ins and outs of finding the right kind of helmet. In the meantime I attended to the critical matter of assuring the safety of everyone on set. 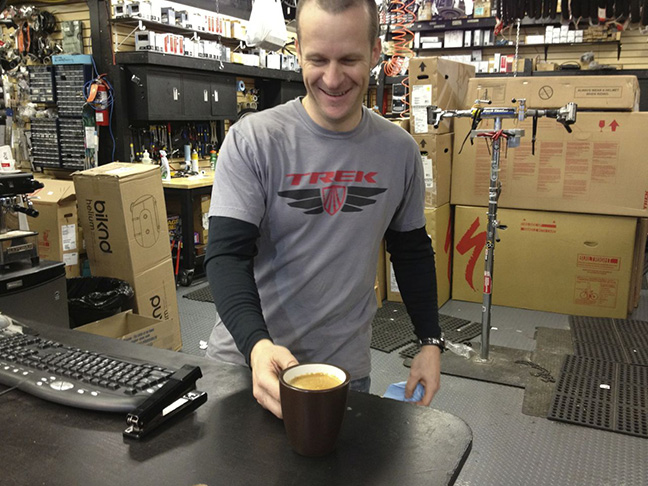 The video was edited together, complete with graphics and sound, and delivered to the government where it was prompty put on the shelf awaiting a formal launch date – which finally came last weekend in conjunction with the introduction of the new helmet legislation.

As you know, I am a huge fan of bike riding. I am not, however, a fan of head injuries, and as such was pleased to help produce a video that encourages their use. Legislation is a different matter entirely, and thankfully falls well outside of my job description.

I’d like to thank Alter Ego for letting us use their shop during business hours – Dave Chennel for adding his unique talent to the video, and James for ensuring the safety of everyone involved. I’d also like to thank Twila and Jason of the MCA for the opportunity to work on this fun project. And most of all, I want to thank Jay, the Kids (Aaron, Jenna, Alex, Olli, Sebastian, Anna) and their very patient parents.

Finally, thanks to the talented guys over at Handcraft Creative for helping make a safety video that delivers an important message while actually making people laugh.

← Mucho Muerto
Milan, Altona and Beyond →