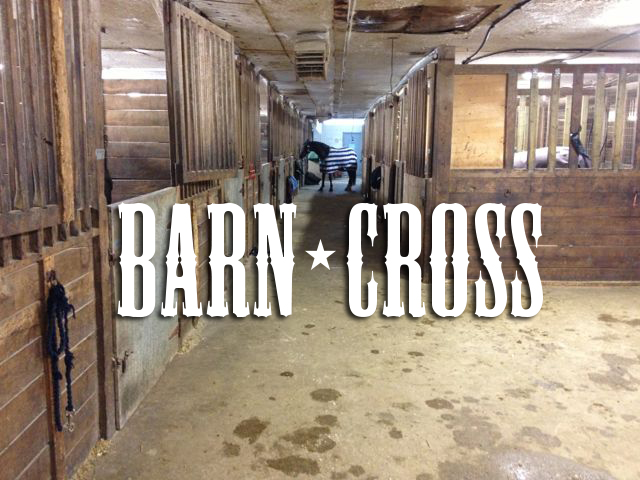 It’s winter in Winnipeg, which, in addition to being ridiculously cold, can also be ridiculously boring. Especially if you routinely refuse to go skiing. When I think of skiing, I like to think of the handful times I’ve gone west to the promised land of picturesque mountains and apres-ski cocktails consumed in the company of stylish Japanese tourists. Instead, my local cross-country skiing experiences have proven to be frustrating and futile exercises in expending huge effort in return for remaining almost completely still, followed by a cold and sweaty drive home.

Off-the-grid bike races like BarnCross not only give me chance to catch up with my race buddies in the winter, they also save me from the boredom-induced homicidal angst that comes after two months of riding the goddamn rollers. Yes, that’s right. They are the “goddamn” rollers now. 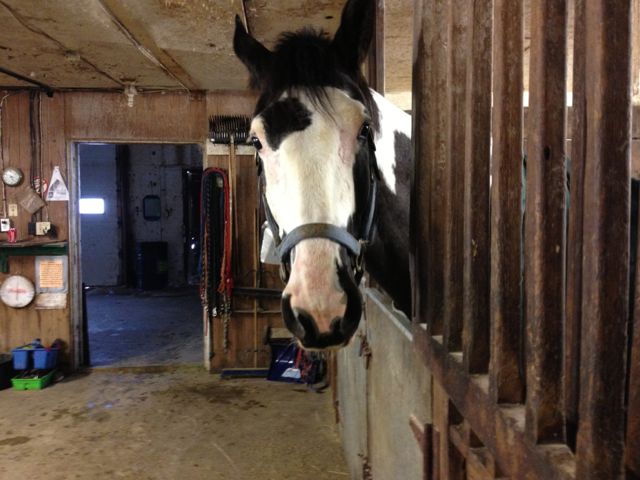 What are you looking at, horse? You’ve never seen a lady curse before?

Misty River Ranch is a family-run equestrian facility just outside the city. There are indeed horses there, and presumably people ride them. More importantly, the riding arena where the horses run and do jumps and tricks and stuff is a perfect place for a cyclocross race. The ground is soft and sandy, but rideable, and surprisingly devoid of horse shit (at least in the literal sense). Even though it’s not heated, the barn never dips below zero degrees, which was about thirty degrees warmer than the bullshit riding I did all last week.

There were horsey things for us to jump over, 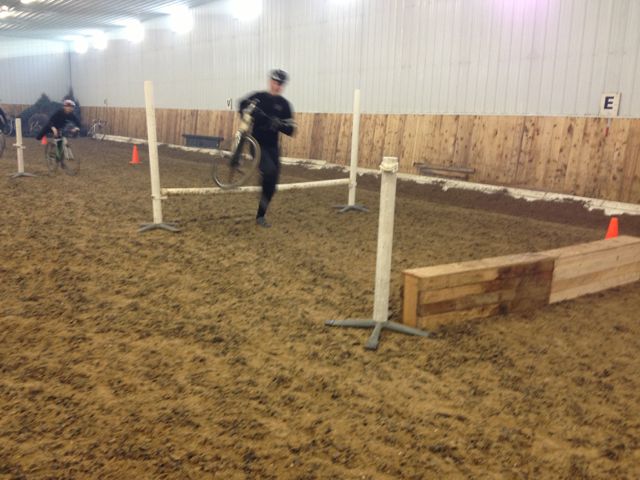 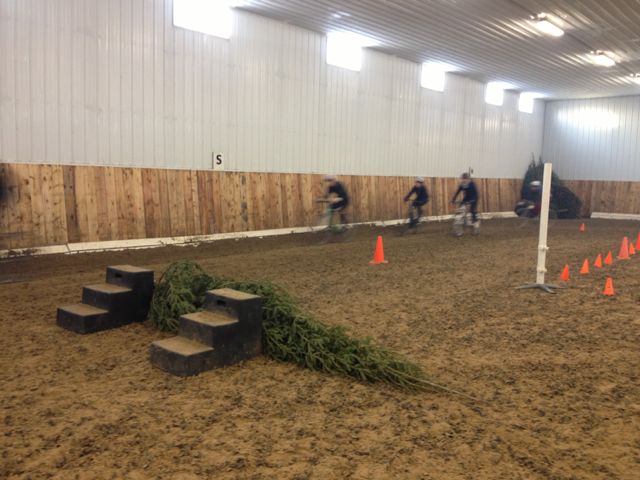 some nice straight-aways for fast and exciting starts, 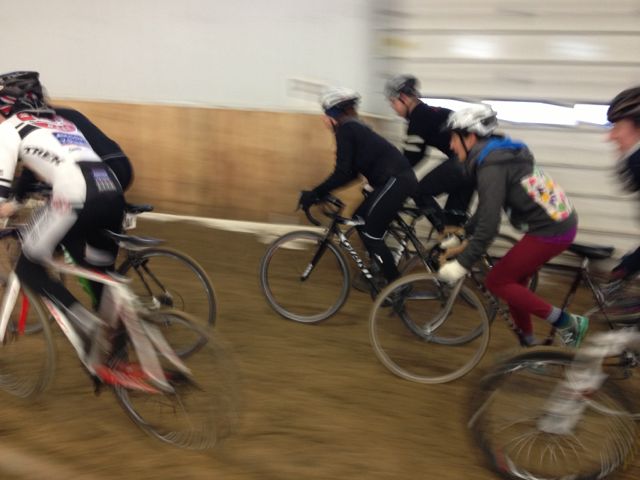 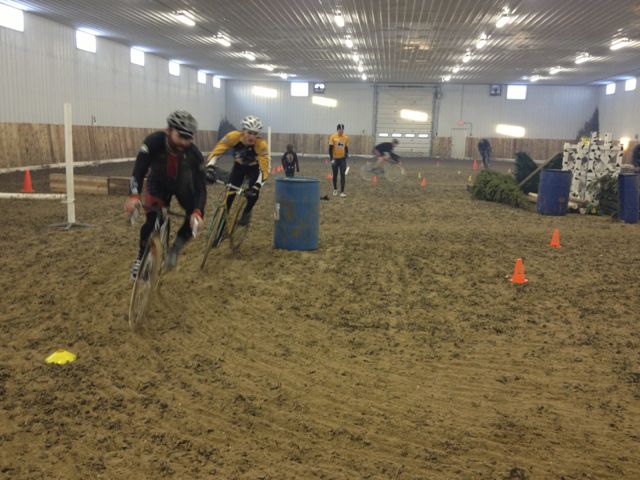 and, of course, lots of beer. 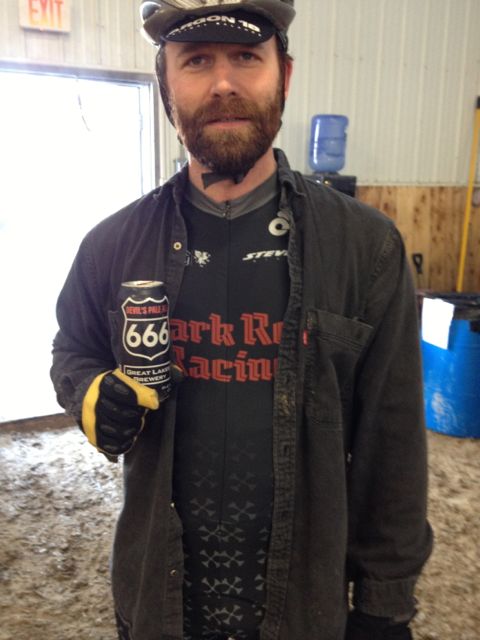 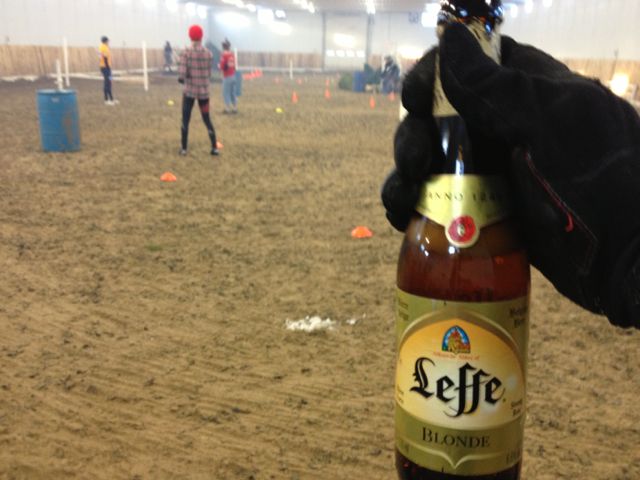 And let’s not forget that racing in a barn is an excellent excuse to wear plaid. 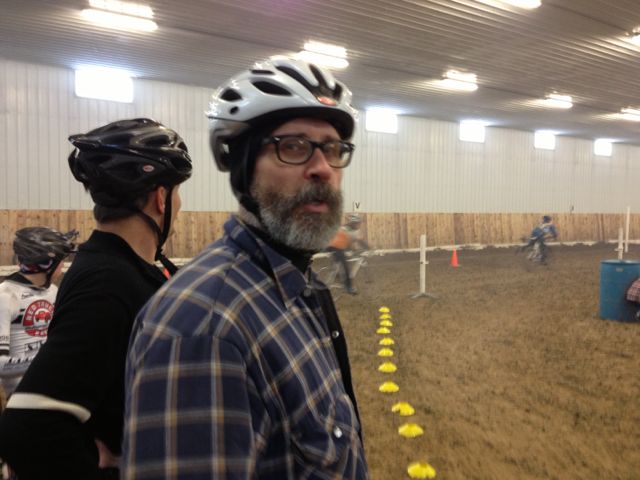 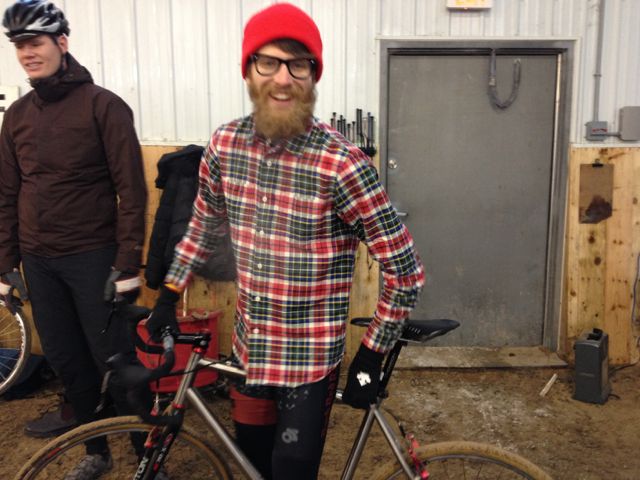 Hipsters love plaid. So do rednecks. Most of us fall into one category or the other.

People also pulled out plenty of old-school wool for the occasion. 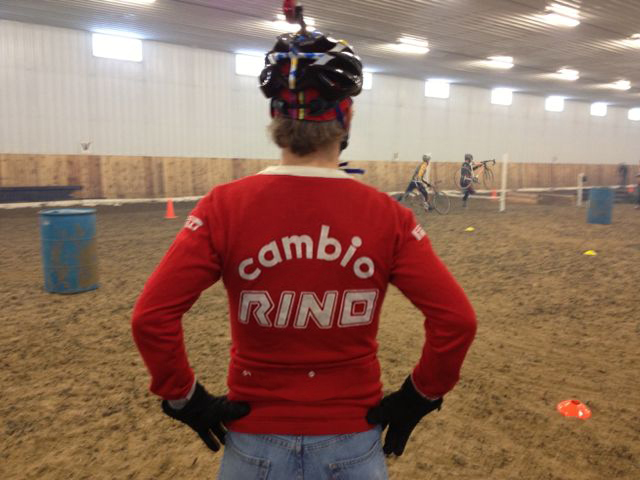 While Dave chose to wear his highly technical winter skinsuit. 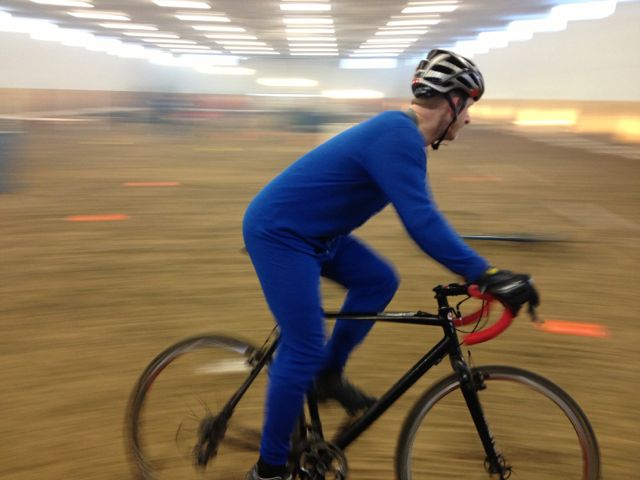 The format of the race was moto-style – heats of six to eight riders who then got seeded into semi-finals and then finals – followed by some track-style oval races. 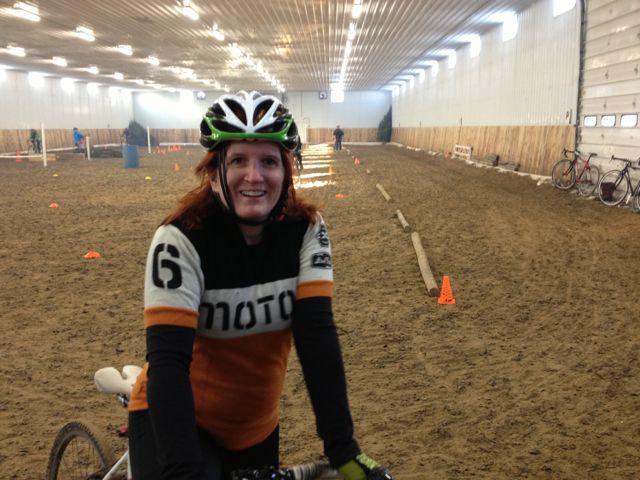 Each race was a blissfully short (yet no less humiliating) three laps, followed by a nice long reprieve to catch one’s breath and watch the ensuing carnage as people warmed up and became more and more inebriated.

Part of the charm of an off-the-grid race is the ability to make up rules as we go along. Like the “no running” rule that was implemented when someone discovered that running the course was faster than riding it. Or the “no knocking shit (or people) over on purpose” rule – the latter only applying at the discretion of the race director.

Drinking on the course is permitted and encouraged, provided one is of legal age to do so. The Hipster impressed us all by consuming three beers in one race. That’s one beer per lap. Chapeau sir. 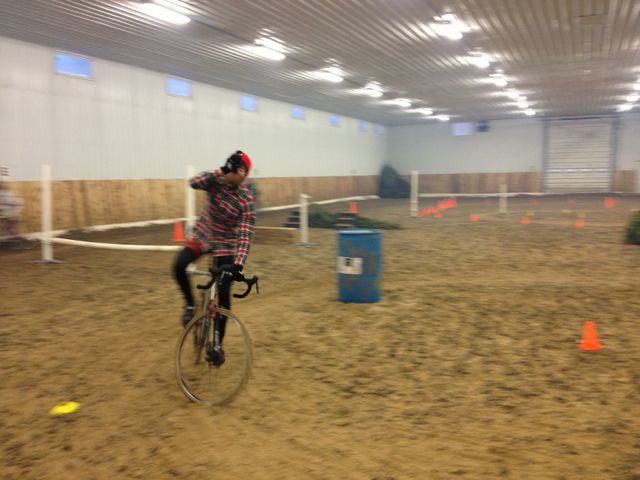 When we were finished, it was the horses’ turn. Sadly I missed this part, but from what I hear, they did great, and didn’t even poop once. 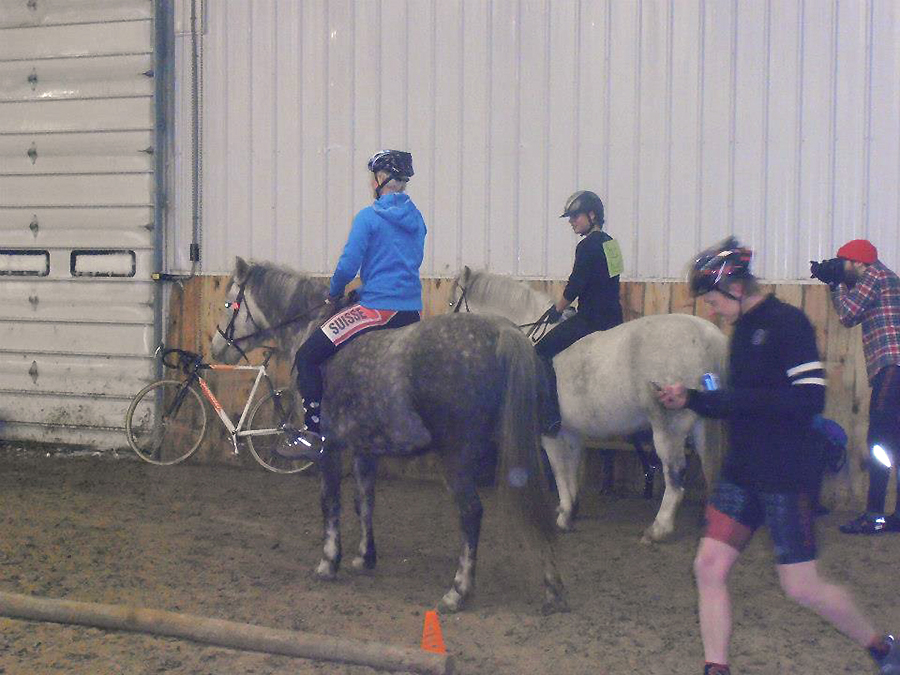 Yes indeed, it was good times. Plenty of thanks to The Impaler for making this happen, and The Dark Lord for keeping things running as smoothly as can be expected for trying to corral an excited and slightly tipsy bunch of bike racers in a barn. And finally a heartfelt thanks to John and Sarah Biron for allowing us to use their great facility again, and for being such gracious hosts.

If I have one complaint, the lineup to the ladies’ room was a little long. 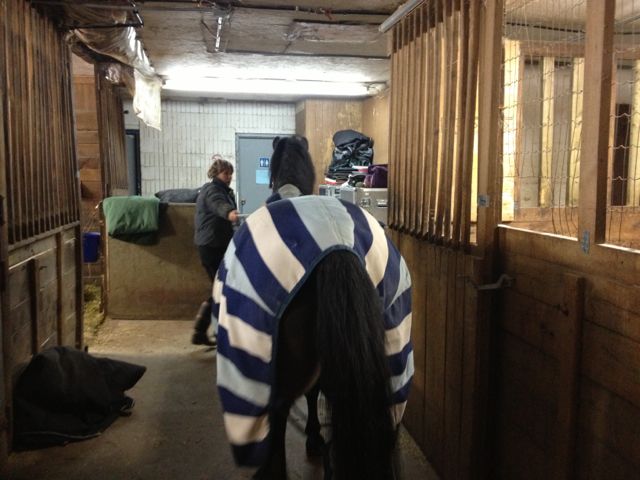