A Giro with a Side of MIPS

I am a hypocrite.

In my slave life as a creative professional, I worked with the local government to create a campaign to educate the public about new helmet legislation. I also helped produce a three minute video about bike helmets, which includes important details on how to select, wear, and care for this miraculous thing that could protect your noggin in the unfortunate event of a crash or collision. One key point I have emphatically delivered to the public is the fact that one should replace one’s helmet every three to five years, after which time the materials degrade and no longer protect your fabulous brain.

And yet, I have been wearing the same helmet for over eight years.

My helmet is a sexy Spanish Catlike helmet that was presented to me by the hubby to replace my first-ever helmet, which I purchased at Canadian Tire on the recommendation of my triathlon coach (may God have mercy on his soul). Nevertheless, when I saw the price tag, I was outraged. This ridiculously expensive new helmet was full of holes and weighed less than a piece of toast. How could it possibly protect my head? My poor hubby had surely been swindled. 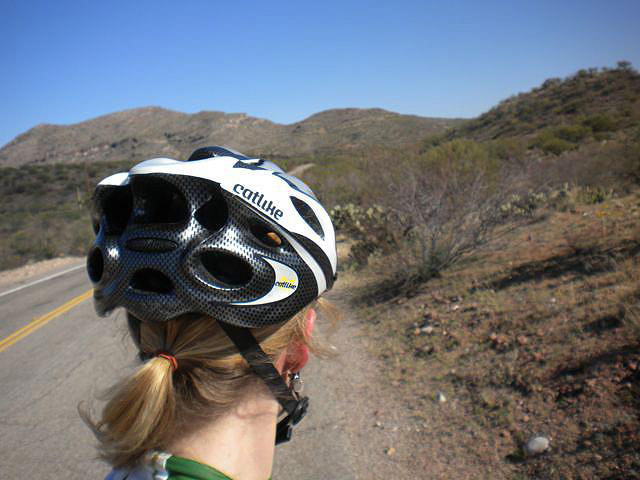 As years went by and my knowledge of cycling hipness expanded, I grew to love the helmet, and was hesitant to get rid of it in spite of the fact that it was well beyond its expiry date. It had withstood multiple crashes and should have been replaced multiple times over. Worse yet, the foam pads had disintegrated beyond recognition and smelled like road kill. Another, far more important motivator, was the recent occurrence of crashes suffered by close cycling friends, in which their helmets undeniably saved their lives. In that regard, my old, expired helmet was about as much use as a thick layer of styling mousse.

Helmet technology is constantly changing – most commonly in the areas of style, aerodynamics, and ventilation. Oddly, it was just recently that SAFETY was added to that list, with the advent of  MIPS – or (for the acronym adverse) Multidirectional Impact Protection System. It was developed by a cooperative of smartypantses in Sweden, and, from what I have gathered from the limited research material I could find and still remain conscious, is the first significant advance in safety features since the early 1990’s. In fact, many of the changes made in the last twenty five years to improve aerodynamics, style, and ventilation have come at the expense of safety. Lab tests have shown that a rounded shape (like a bowling ball) is safest in a crash, sliding and scrubbing energy from the impact. The helmets introduced in the late 1990’s were more stylish and elongated, with ridges and rear peaks, that in the event of a crash, could catch and dangerously jerk the rider’s head and neck.* 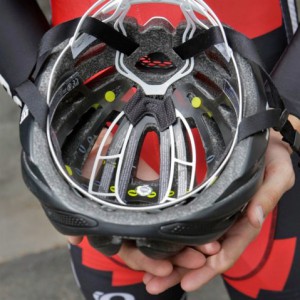 According to the MIPS website: MIPS is a revolutionary technology that lets the helmet slide relative to the head, adding more protection against rotational violence to the brain caused by angled impacts. Basically, the helmet comes with a plastic roll cage that, on impact, allows the head to rotate within the helmet, rather than the brain sloshing around within the skull, which can cause a concussion. I’m told, by next year, it will likely be the norm in all newly released helmets, in the snow, motorcycle and bike categories. Hockey, are you listening?

MIPS has partnered with many of the large helmet manufacturers: Specialized, Giro, Bontrager, Lazer, Bell, and more. After some (uncharacteristically) well-informed shopping, I decided on the Giro Synth. It’s Giro’s top-of-the-line helmet, and has a pleasantly rounded shape that the science nerds would approve of, and fits my smallish noggin perfectly. The helmet, she was not cheap. But putting things in perspective, I spent less on it than I spend on wine in a month. And the difference in price between the MIPS version and non-MIPS? Three Starbucks Caramel Macchiatos, give or take. I figured my tiny head was at least worth that.

During my shopping adventures, I was presented with a number of “women’s” helmets to try on. When I asked what the difference between the men’s and women’s helmets was (I had always presumed our heads were gender neutral), I was told “the colour”. Needless to say I shared my opinions on that horseshit with the shopkeeper, and ordered a regular, grown-up helmet without pink and purple swirls on it. I understand the need for things like a women’s specific saddle. We are, after all, different “down there”. But I cannot support the industry’s relentless ‘shrink it and pink it’ marketing strategy. Make it smaller and make it pink, and the women, they will buy it. This woman opted for a white/high viz colour combo that matches both everything and nothing, but also has the added safety feature of making me visible from space.

So after all of that, does it work? I hope I never have to find out.

← Bikes vs. Cars – The Movie
Love and Hate in the Time of Strava →