Note: I contemplated writing this entire post in “valley-girl”, but thought it would be, like, you know, totally bogus.

I have a bag from Lulu Lemon that has various inspirational and hippy-dippy life mantras written all over it. Being told by a retailer of overpriced yoga-wear to drink more water and that friends are more important than money frankly makes me want to set the thing on fire. But there is one sentence on this bag that does resonate with me. It is this:

Do one thing a day that scares you.

I’m pretty sure they don’t mean things like having a bath with a toaster, but rather less fatal things that challenge you beyond your normal comfort level. It would be tricky to fulfill this particular mantra every day, unless you happen to have a phobia of something like, say, going outside, or getting dressed. But if hurtling yourself down a steep hill on a bike at 65 km an hour counts, I did that, and I was scared shitless. So much so that I don’t think I have to do anything even remotely scary for a month or two. Screw you, Lulu.

I signed up for a 40km time trial in the Pembina Valley this weekend, since I’d never really ridden in that area and never done a time trial, other than an 11km one at Bird’s Hill Park. Time trials are probably the safest bike race you can do, since the riders are staggered and you are essentially riding alone, against the clock. No drafting, no tactics, you simply ride as fast as you can until your legs fall off.

Unfortunately the TT was cancelled days before the event due to poor pre-registration numbers – there were more volunteers than racers. But there was enough interest to still have a group ride at the same spot and time. I decided I would go, even though I didn’t know who would be there (I’ve never been accused of being shy), even though it could have turned out to be five Cat 3 racers and me. God knows I love a challenge, but thankfully that was not the case. Soon after I arrived people started to show up. Tons of people, maybe close to 20 riders. Of course, as these things go, there were lots of people I know and ride with (Ben, Chris, Aaron, Paul, Donna, Francois, John), and people I know and would like to ride with more (Rick, James, Chris, Nathan, Clyde, etc.), people I’ve seen at the races, and new faces too. I was beyond excited. 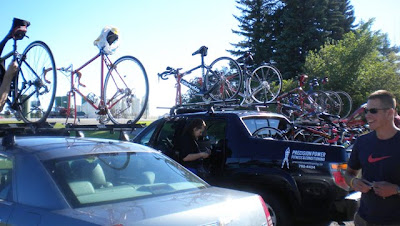 The plan was to ride about 60 km into the valley, an out and back, break for water, etc., then another shorter loop. Sounded fab. As we set out, I settled into a group of riders I knew would be fast, and totally rock solid. We started slow, to make sure everyone was with us, then the pace gradually ramped up to about 37km. The formation was not quite as structured as I am used to, people floating around, not always two-up. But I felt very comfortable with the group, and just made sure to pay attention. Then I found myself at the front with John Daniels, a cat 3 racer with thighs the size of my waist.

Thankfully John likes a bit of time to warm up, so rather than ripping my legs off, he seemed content to keep the speed where it was. Soon after we settled into our pace, James from Alter Ego came up to the front and told John to ease the pace up a bit, to keep the group together. Fine by me. 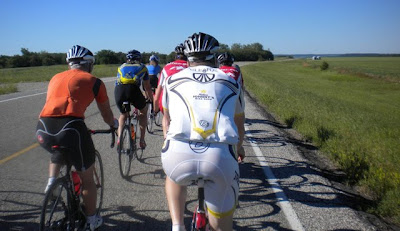 Next thing I knew we rounded a curve in the road and were rocketing down the Hill of Death. As I started going faster and faster down the hill, I felt more and more panic set in, until the bike and I were shaking so badly I was convinced I was going to crash. I don’t think I have ever been so terrified in my life. I pictured a life-ending full body smash into the pavement, and was too scared to even scream. The bike seemed to be barely touching the ground, and I had to force myself to relax to try to keep control. I was going way too fast to stop, and kept feathering my brakes in an attempt to slow myself down, so that when I crashed I would perhaps only be permanently maimed, rather than killed outright. But somehow, by some miracle I made it to the bottom seated soundly on my bike, with all my skin still attached. I barely remember the climb out of the valley that followed. I do remember passing people MUCH stronger than I am, which is a true testament to the performance enhancing properties of pure fear. Perhaps rather than EPO, the pros should try dodging rush hour traffic, or ride those crazy roller coasters. 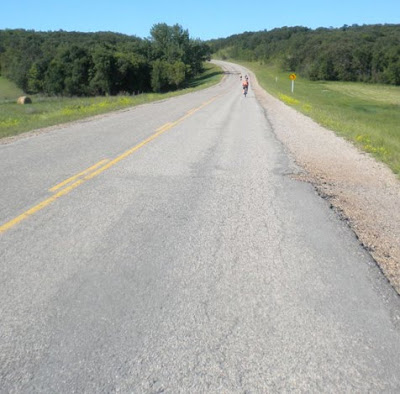 The crazy thing is, I LOVE descending. At 150 pounds, I am far better suited to going down than going up. When I was in Arizona this spring, we climbed and descended similar grades, and going downhill I was fearless. And liked to go fast. The faster the better. So why was I so spooked and unsteady going down this hill? I have come up with a number of theories that may have in some combination contributed to my shorts-soiling condition:

1) I had a different bike in Arizona. Not only was my position likely different, the front forks were carbon. On my Giant, the forks are aluminum, which does not absorb vibration like carbon fibre does. This may have been why I felt so shaky (and is reason #427 why I need a new bike).

2) I was not expecting it. Leading up to the valley ride, I was thinking about the challenge of the climbs. Hadn’t even considered the descents. Duh.

5) I was looking at the road just in front of my wheel. Imagining how much it was going to hurt when I hit it. It is far better and less terrifying to look farther away into the distance. The hill will not seem as steep, nor will you feel like you are going as fast as space debris entering the earth’s atmosphere.

6) When you descend, it is a good idea to squeeze the top tube between your legs. Sounds weird, I know. Feels even weirder. But it does help keep the bike from wobbling, and therefore helps to keep you smooth and upright. The fact that it also feels a bit kinky is merely a pleasant distraction.

When I got to the bottom, I swore I would never do it again. In fact I told everyone that passed me so. Thankfully I have friends who don’t give a shit about stuff like that and made me do it again. And, since I did not die, I am very thankful they did. The next few descents were awesome. I felt stable and loved the feeling of speed. I remembered how it felt in Arizona and the fear went away. Going down the hill, I waited for the moment when the bike slowed enough to pedal and engage a gear, using the momentum to go even faster. Sadly, just as things were clicking, it was time for me to go. 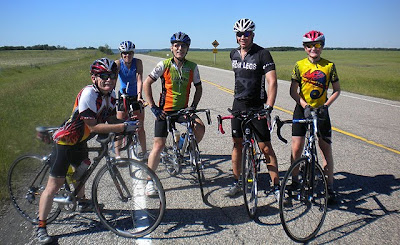 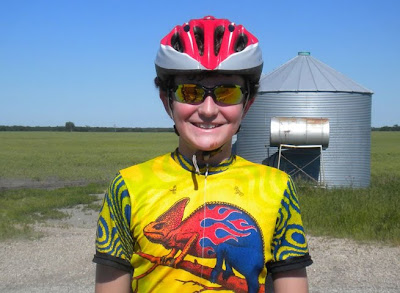 So I will have to save the fun for another day. A day where I will bite the Bad Dog.
Like, fer shur.

← The Morning Ride
Doing it. →