Along with finishing my first 200km brevet and fixing my first roadside flat by myself, my recent visit to La Bicicletta in Toronto ranks in my top ten cycling experiences so far. Maybe even top 5.

La Bicicletta (pronounced “la Bee-chee-KLET-ta”) is located at Castlefield and Dufferin, which in terms of my Toronto experience and knowledge, is a completely foreign country. Getting there took some doing, and at a certain point I questioned whether going all that way alone and in the dark without calling first was wise. But I have never been accused of being excessively sensible. Or, unfortunately, of having a decent sense of direction. 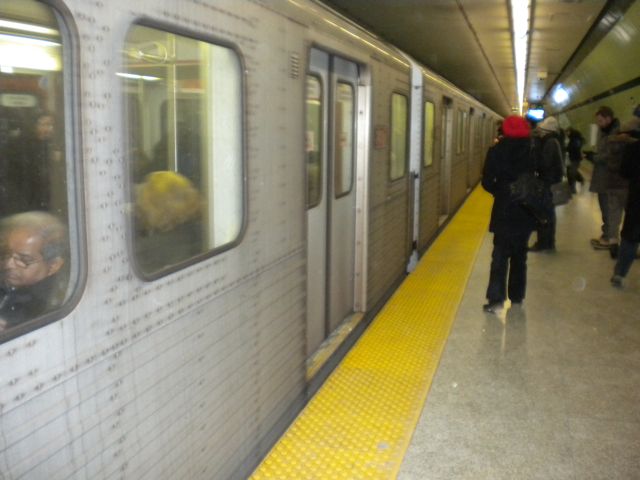 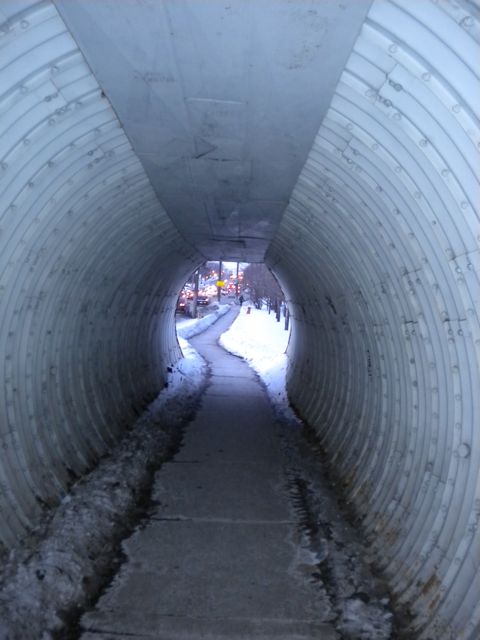 After awkwardly reacquainting myself with Toronto public transit, I soon found myself walking in completely unfamiliar territory. It was freezing cold, even by Winnipeg standards, and I was becoming more and more convinced that I was hopelessly lost. After all, with its markedly British roots, there are approximately a million streets in Toronto that have the word “Castle” in them. Just as I started to formulate the description of my dismal failure, I saw a bright and shining beacon: a backlit Look sign. I had arrived. 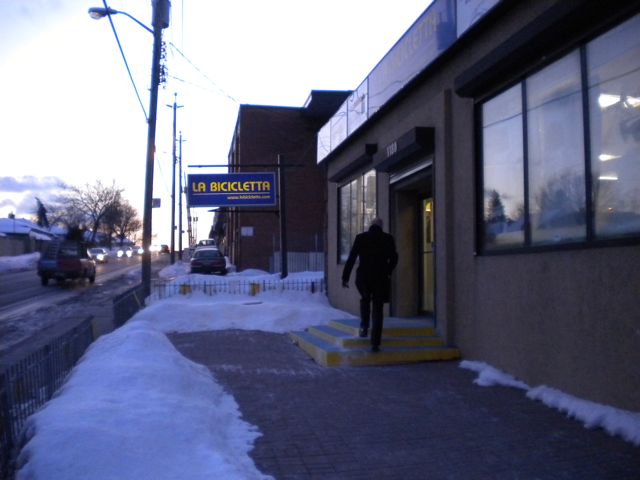 When I walked in, I was greeted almost immediately by a cheerful man named Paul, who asked what he could help me out with. It was hard to focus on what he was saying because I was a little distracted by this: 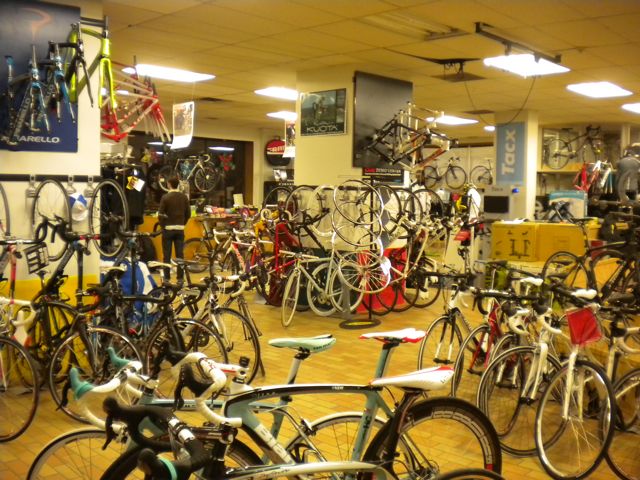 Bianchi, Pinarello, Specialized, Marinoni, BMC, Look, Focus, Cinelli and more. There were bikes here I had only read about in magazines. I was in carbon fibre heaven.

As I stood at the door glassy eyed and gawking, Paul offered me an espresso. I decided right then and there that I would never leave. 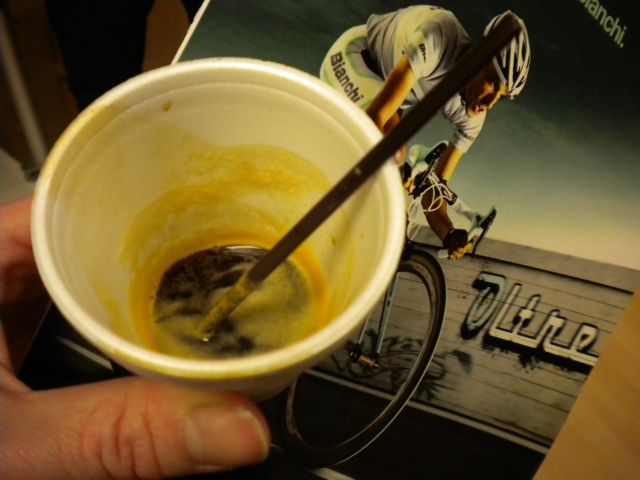 I was treated royally: given the grand Tour de Biciclette, shown the fit room, the accessories and the clothing section, which holds a mouth-watering array of Rapha. 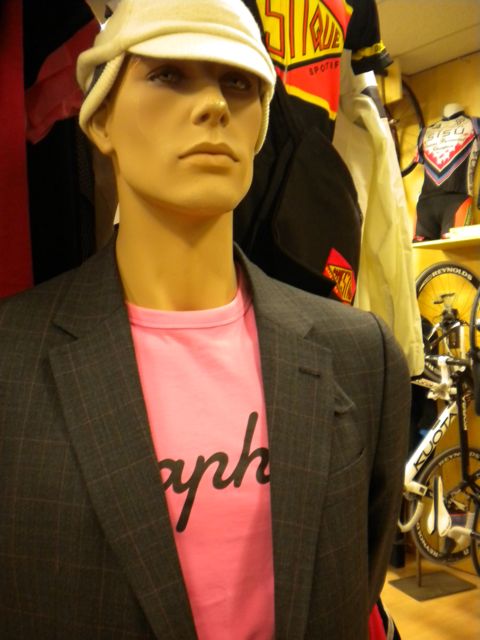 There is an obvious love of all things Italian here, evidenced by an impressive art collection that includes a special edition Coppi bike with mirror chrome finish (which I can’t believe I didn’t get a picture of), a Bianchi C2C frame painted in the colours of the Italian flag, and a Campagnolo group set identical to one given to the Pope. And by The Pope I do not mean Mario Cippolini, Marco Pantani or Fausto Coppi. I mean The Pope. 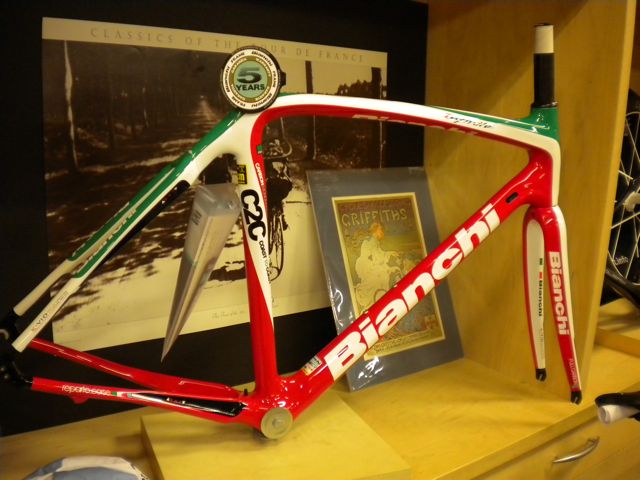 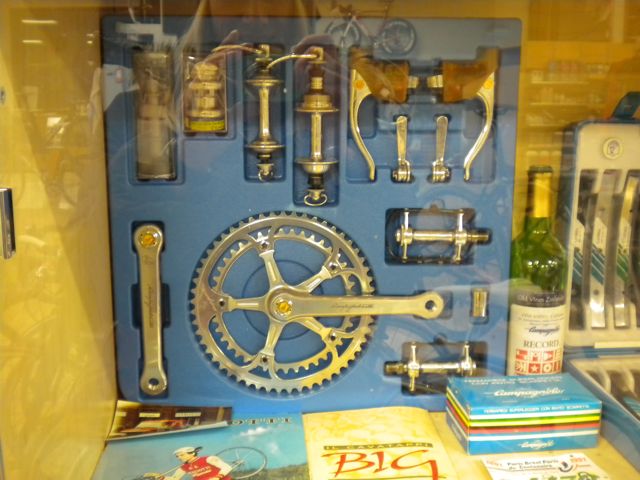 Paul also introduced me to La Bicicletta library, which held a great selection of hard-to-find cycling books. I was unable to resist a 2nd edition soft-cover issue of Canadian domestique Michael Barry‘s Le Métier, especially considering Barry is from Toronto and rode these very streets. Barry had come to the shop back in August for a book signing, during which the power in the building went out, sending everyone into the street for an impromptu block party, a story which made Paul’s eyes light up when he told it. I regretfully left behind a copy of The Peleton, a beatifully designed and photographed book published by Rouleur. 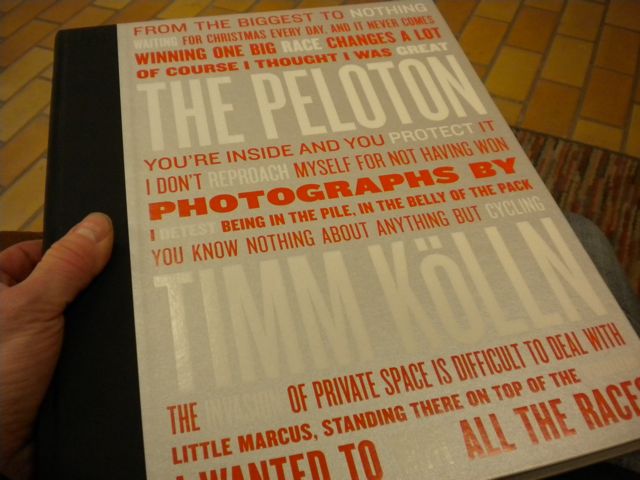 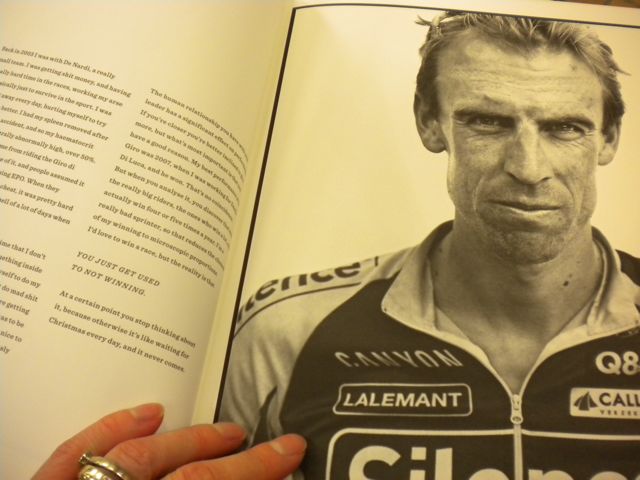 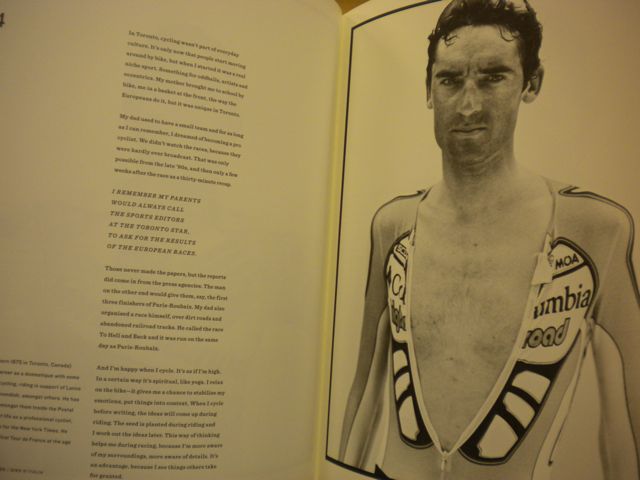 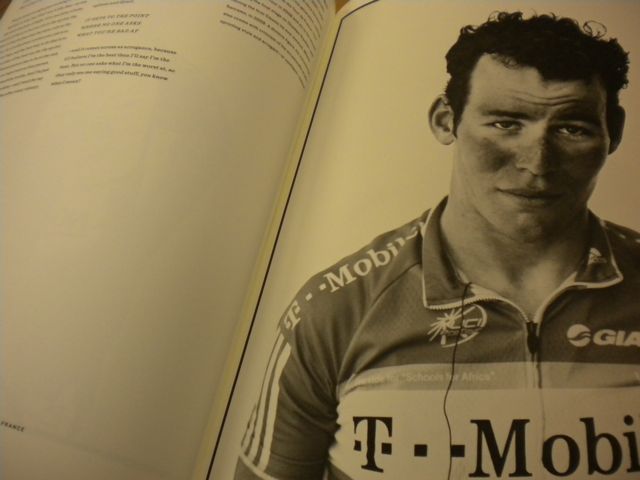 Thanks for letting me fondle the merchandise. I do apologize for the saliva stains.

Just when I thought things couldn’t get any better, I was introduced to Krys Hines, proprieter of Domestique-Café Cyclo Sportif, a café in Dundas, Ontario catering to both the local community and cyclists alike. The name was inspired by the hard-working and ever modest domestiques of the pro peloton, particularly Krys’ good friend, none other than Michael Barry. Krys’s knowledge and love of bikes and cycling (he is also a recovering frame designer and builder) is only matched by his knowledge and love of coffee, so I knew right away we would get along famously. 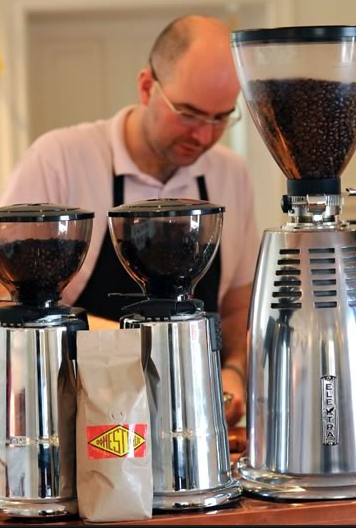 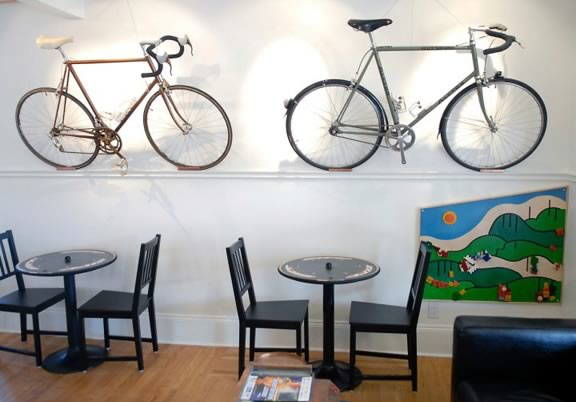 Krys was carrying a package as special as it was enormous. With great pride and excitement he unwrapped a framed and autographed world-champion jersey worn by Thor Hushvold. That the glass was not SMASHED by the mere presence of the champion’s lingering sweat molecules boggles the mind. In spite of the urge, I decided not to lick the glass, so as not to appear unladylike in front of my hosts. I know others who may not have been able to show such restraint. 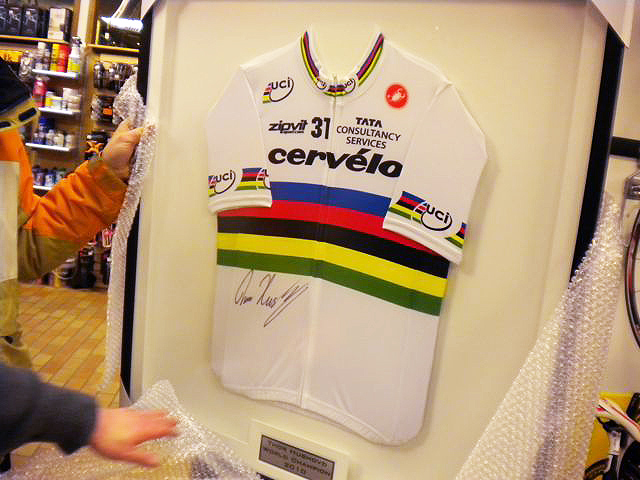 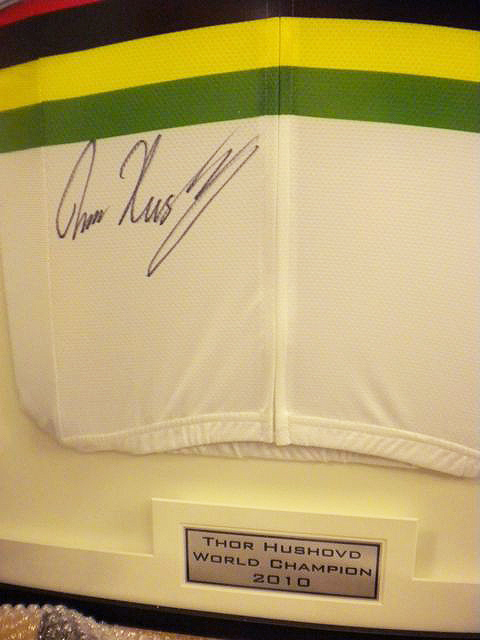 How did Krys score Thor’s jersey? He also happens to be on a first-name basis with a couple of bike geeks called Vroomen and White. You may have heard of them.

As much as I could have stayed all night taking about cycling while drinking espressos surrounded by gazillions of dollars worth of The Shit, I had dinner plans with friends and reluctantly announced my departure. Krys happened to be heading in my direction and kindly offered me a lift to the restaurant, accompanied by Thor’s jersey. How could I refuse?

Going to a good bike shop in another city is sort of like finding the one English speaking person in a country where you don’t speak the language. You feel a sense of familiarity, ease and instant camaraderie. And you are much less likely to spend the equivalent of $20 for a pack of matches. Not that I did that once in Athens.

My shopping list was successfully accomplished, with a couple of unplanned additions thanks to a bonus 10% discount generously offered at the cash register. I expect the Bianchi should arrive in the mail any day now.

Next time you’re in Toronto, make your way to La Bicicletta. Then hop on your bike and make your way up to Dundas for a mind-blowing coffee and great bike talk at Domestique. I insist. Tell them Cycle Chick sent you.

← Pictures, Soap and Losing Your Marbles
With Deepest Sympathy →