Every year a small posse of riders from Portage la Prairie’s Junk Yard Dogs join a rag-tag group of Winnipeg riders for the cycling equivalent of a 200 kilometer progressive dinner. The start location alternates year to year between Portage and Winnipeg, and the ride progresses to the other city and back again. In the middle and at the end of the ride, there are snacks.

On a good day, riding 200km is gruelling. On a bad day it’s like a root canal without anesthetic. This late in the season, it was certainly likely to be more like the latter than the former, but not being one to shy away from physical discomfort (especially with the promise of snacks) I eagerly signed on. 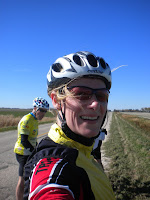 There were some fence-sitters early in the planning stages, who I was counting on to keep the ride civilized. The organizer is Michael Whalen, one of the strongest road cyclists I know, who seems remarkably unaware of his ability to rip everyone’s legs off with little to no effort. Besides Michael, the only other committed riders were Bob Guenther and Nettie Neudorf from Portage. Bob is an accomplished Cat 3 rider and Nettie, in addition to sweeping provincials in her (or rather our) age group, took two gold medals and one silver at the National Road Provincials this year. Right… And me.

But what the hell, we all have to die sometime.

Bob and Nettie showed up with an additional rider, Eric Vickar, who I’d never met or ridden with, but was so pleased to see I almost hugged him like a long lost twin.

We started with a large group of 14 due to a lovely lead-out from a group of 9 additional riders from Winnipeg, who escorted us to St. Francois Xavier (St. FX for us poor Anglophones) then wisely turned back.

And then there were 5.

The wind is always a factor on the open road, and can be a welcome companion pushing you along like a hand on your backside. Or it can be a relentless fiend that kicks your ass until you feel like pitching your bike in the ditch and hailing the next tractor for a lift home.

After 100 hard kilometers in the wind, we arrived at the lovely city of Portage la Prairie, where we stopped and enjoyed the hospitality of Nettie and her wonderful family. We ate the promised snacks, courtesy of Two Tired Boys bike shop, admired her lovely landscaping, and were on our way.

In spite of our prediction of a tail wind for the way back, it never materialized and we fought the head and cross wind the whole way. But we rode well together, and at times you could only describe the feeling as beautiful. There is something poetic about a well-running echelon or paceline. Perhaps it’s the fluid motion, the silent understanding from rider to rider. Or perhaps it just makes you forget, for a brief moment, the overwhelming need to vomit. 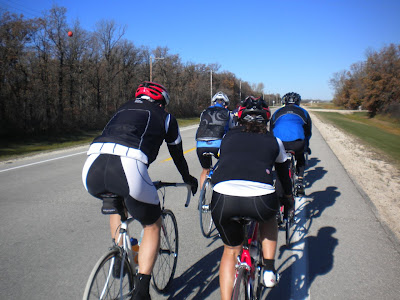 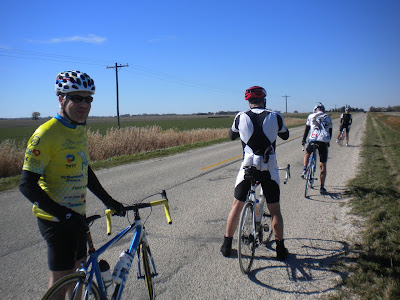 Nettie’s husband Phil served as pit crew along with her son, tailing us on the way back to Winnipeg. Anytime we stopped, Phil was there to make sure we had enough food, water, and even toilet paper. This made for a vaguely TdF feel to the last half of the ride, especially when I flatted about 1km from the end. I stopped and immediately removed my back wheel in anticipation of doing a roadside tire change, when out of nowhere Phil appeared, plopped a new wheel on my bike and sent us on our way. Now that’s service!!

Apres-ride was heartily enjoyed with beer, pizza and tons of bike talk. When you are obsessed with bikes and biking you often have to contain yourself when around other people who are not. It would be easy to become the kind of person you hate, who won’t shut up about golfing, scrapbooking, Star Trek or anything else you don’t give a shit about. Which is why apres-ride is so great. You can totally geek-out among your brethren bike geeks, completely guilt-free.

In spite of the conditions, we made excellent time and even more excellent memories. Thanks folks. You are all freaking amazing and I look hesitantly forward to next year.