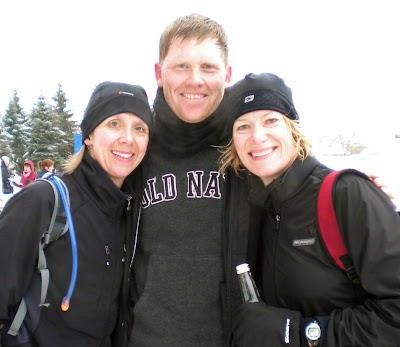 Today I participated in the Ice Donkey Adventure Race with two of the best people I know, Lisa and Dan. The race combines ice biking, snowshoeing, skiing and skating. The day started well despite my son waking up in the middle of the night puking all over his room. I was well rested, reasonably organized and raring to go. Dan picked me and my mountain of gear up in his monstrous “big man” diesel truck at 6:45 am and we drove to Lisa’s places, stopping just long enough to top up our coffee’s with a healthy shot of Bailey’s. Once Lisa’s gear was loaded the truck looked like it belonged to a family of very sporty gypsies.

Off to the Forks we went to register, sign waiv 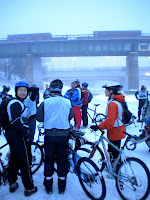 ers, and check in our gear to the various stations. Because of the unseasonably warm weather, the organizers had been forced to make some major adjustments to the course. Unfortunately none of these adjustments included scrapping the whole thing and hitting a hot tub. No matter, we were ready to race. The weather is retardedly warm for this time of year, which was great, except that everything was wet and slushy, which could make the course messy and difficult. After the pre-race briefing we were herded to the start of the bike leg and off we went. No dramatic sprint from the gun, more like a slow run of anxious cattle being corralled. Eventually things thinned out and we started to roll. Right into a path of mashed potato snow that made riding virtually impossible. Being a staunch roadie, this manner of riding was very foreign and scary for me. 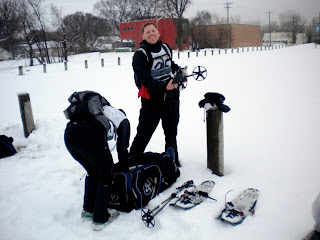 Not so much the proximity of other riders, or the fact that people were stopping and starting right in front of you, it was the fact that the deep snow was twisting and turning the wheels and handlebars this way and that, making the bike slide around in most unnatural ways. On a road bike if your handlebars turn, or your wheel slides out from under you, you are eating pavement, a taste I have come to dislike immensely. Lisa must have sensed my difficulty (perhaps my screaming tipped her off), and offered some tips from her mountain bike experience. Something like “relax your upper body, let the handlebars hold you up”. Which sounded to me something like “just pitch your bike in the trees and lets go find some pancakes”. It became clear not long after that that not very much of the bike course was actually bikeable. So what I was expecting to be an 8 km ride on a nice packed path in the wintry woods turned into an 8 km bike portage through calf-deep mashed potatoes. I claimed the first crash of the the day for our team when I flew ass-over-teakettle off my bike into a slushy snowbank. Not painful, just embarrassing.

When the portage blissfully came to and end we came into T1 (transition 1) to snowshoeing. The extent of my snowshoe experience had been trying them on in my basement. One they were on the right feet (thanks again to Lisa and Dan) we were off!! We tromped down to the river where a path had already been beaten down by those foolish enough to get out in front. Despite Dan’s desperate attempts to crush the competition, we kept a slow and moderate pace in anticipation of the long race still ahead. I figured the snowshoe effort would be about the same as the ski, and started to relax, thinking the worst was over. 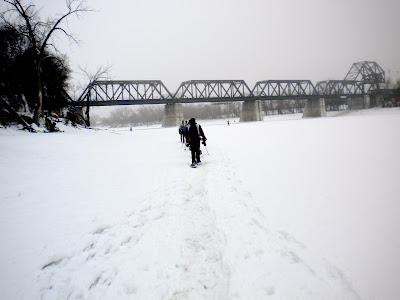 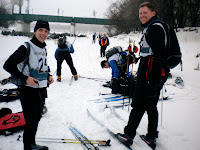 We looped around the river and back to the Forks to pick up our skis at T2. This would be where we would eventually return to get our skates. We headed off on the freshly cut ski trail and I was amazed at how slippery the snow felt under my skis. I had been expecting snow so sticky that we’d be practically walking. A bit of slip is good when you are skiing, but if you have too much slip, you end up sliding backwards too. The three coats of grip wax the guy at the ski store had recommended seemed to have vanished and every muscle in my body was working to try to propel myself forward. Within five minutes I was soaked with sweat and my heart rate was through the roof. The trail never seemed to end as I struggled to keep up with my team. I started to double pole, which I did mostly because my legs were burning so bad, and to my surprise found I went faster and with seemingly less effort. It’s unlikely I’ll be able to move my arms tomorrow, but tomorrow is another day. And it is a day I will not bloody ski. 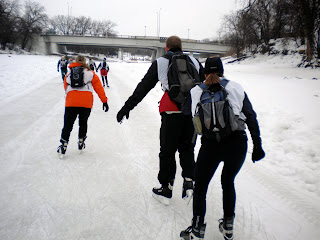 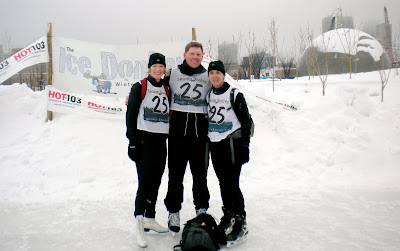 Finally we arrived back at the Forks to start the skate. Lisa had borrowed my brother’s skates to save her feet from the punishment of a pair of 20 year old too-small figure skates that looked fresh off the shelf. Turned out Alan’s skates weren’t any better and she was grimacing in pain before we even started skating. Thankfully the condition of the ice on the river made a long skate impossible, and we just had to do two short out-and-back lengths to the Donald bridge. The ice was the worst I’d ever skated on. It was like skating on wet cardboard covered in Slurpee. We finished the two laps then had to skate/walk/go up stairs and down the ice trail to the Scotia Stage where we were greeted with cheers and photos, but alas no beer.

We skated back to the river trail to collect our soggy belongings and drove to Lisa’s for the aforementioned beer. Which was, of course, the best beer ever. As cold and wet and tired as I was at the end of it all, and as much as I do prefer the warm dry pavement, it was a marvelous day spent outside with great friends doing something hard and scary in the great outdoors. Which in this chick’s humble opinion, is pretty darn cool. 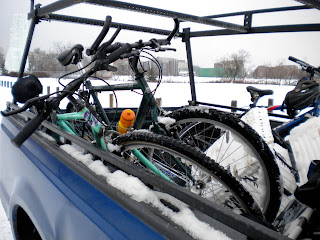