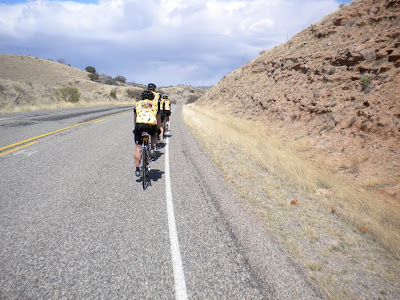 Our last day. It came way too soon, and my goal was this: by the end of the day, I want to be incapable of pedaling one more stroke. I want to want to be done. The last thing I wanted was to want more. It was bad enough that Ben, Michelle and Scott were staying an extra day to ride up Mount Lemmon with Bob and Jim, while I’d be stuck at the hotel waiting for my flight. Ug.We started the day with the usual Tombstone Longhorn breakfast: 2 pancakes the size of frisbees, 2 sausages and scrambled eggs, as well as shitty coffee (which although still shitty, not quite as shitty as the “coffee” in Tucson). Despite our best efforts we have consistently been the last group to roll out almost every day. Today was no exception, but no matter, we had plenty of time to reach the first SAG. The only good thing about the retarded climb we had to do to get into Tombstone was the retarded descent to get out. Brakes were on all the way down, just to keep from going airborne, or slamming into the person in front of you. After the descent, it was a grind into the wind for about 17 miles to the fist SAG. We almost didn’t stop, but glad we did as the next one wasn’t until mile 40. Bladders would have burst for sure. 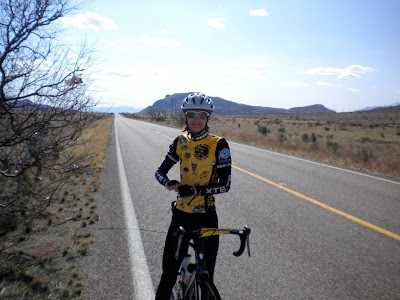 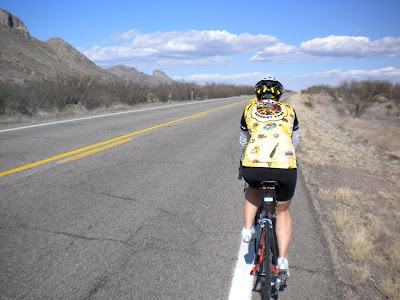 At the second SAG Veronica from Anchorage mentioned there was just 10 miles to “dessert”. By dessert she meant a 10 mile sweeping downhill with switchbacks all the way down to lunch. Yee Haw!!! It was a 10 mile climb to get there, but the 10 miles down were unreal! Once again, Ben and Scott and I did our best to rip each other’s legs off, pausing occasionally to work the draft (and catch our breath). It didn’t take us long to get to the bottom, and we were greeted by a very windy, rainy lunch stop – really the only bad weather we’d seen so far. We piled into the PAC van and ate, trying to keep our legs warm until the system blew over. Always the optimist, Scott admired the spokes on the wheel outside the van window, explaining their excellent engineering. 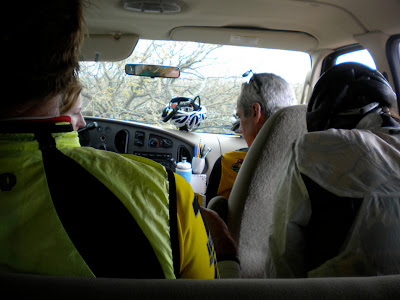 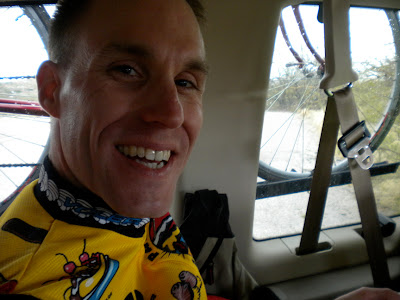 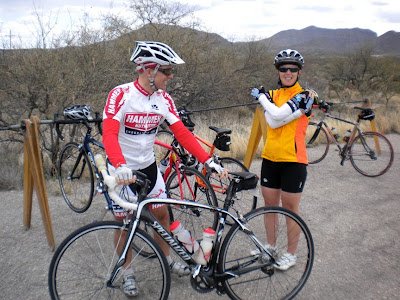 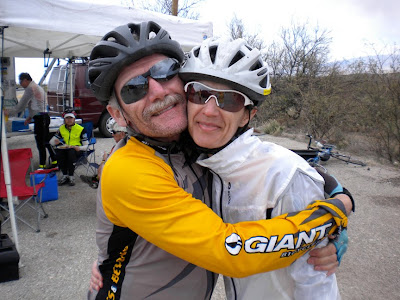 Just to backtrack a bit, a day or so ago there was commotion in camp as a couple arrived we hadn’t seen before. Turns out the guy was David Goggins, a Navy Seal and ultra-marathoner everyone seemed to know and admire. He raises money for the children of soldiers killed in combat, so they can go to university. The guy trains like crazy! Just after we had pulled into the lunch stop, I noticed his female partner standing by the side of the road. I looked to where she was looking and saw him approaching on his bike. Moments before he reached her (showing no sign of stopping) he dropped his water bottle on the side of the road (oh my! I thought…) a split second later he flew past her as she handed him a fresh one. It was a move that had obviously been done hundreds of times and was executed with such smooth and casual precision I was left breathless for a moment. Who would think the mere passing of a water bottle could be so beautiful, so poetic. Goggins is currently training for RAAM, the Race Across America, a 3,000 mile bike race that happens in June and covers 14 US states. RAAM is 30% longer than the Tour de France and solo racers finish in half the time with no rest days.

The weather made several folks decide to SAG back to Tombstone, rather than face the cold, rain and wind. Of course we would have none of that and headed out as soon as we finished eating. We rode against the wind, through some nice scenery, but otherwise a pretty uneventful ride. The last 10 miles were a bit miserable, coming back into Tucson via ugly, busy highways. And I was sore. Tired and sore. The weeks worth of riding was finally catching up and by the time we reached the hotel, I didn’t want to pedal another stroke. Thank goodness. We hugged and laughed and marveled at our great feat of cycling insanity. 532 miles in 6 days with 17,600 feet of climbing. And I’d do it again tomorrow. 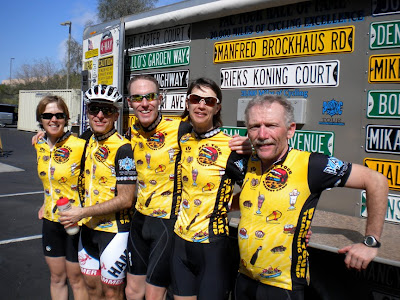 Ben and I didn’t even wait to clean up. We changed our pants and shuffled across the street to get some well deserved post-ride beer. Later that evening Didier and Thea drove us all out to a great restaurant (Elle) in one of Tucson’s many sprawling suburbs. The food and wine were fantastic and a nice change from the more “diner-style” cuisine we had eaten all week.

The next day, as the others prepared for their trip to Mount Lemmon, I wondered how I was going to amuse myself. Naturally I thought I would finally be able to finish the blog posts I had fallen behind on, but I looked out the window at the clear blue sky and decided otherwise. It was a long wait, and I hung around the parking lot watching the PAC crew prepare for the next group coming in. It was hot in the parking lot, I tried to read by the pool (too many splashy kids), wandered the hotel halls, poked into my room for sunglasses, sunscreen, a change of shoes, anything to pass the time. 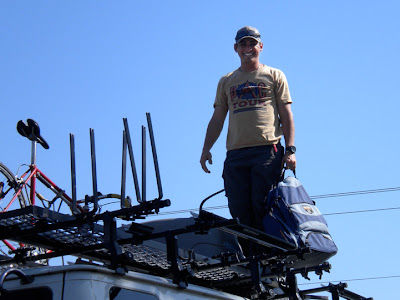 Finally the wait was over and it was time to go to the airport. I’m not a great traveler and generally need hours worth of distractions to keep me occupied. But this time, no matter what book or magazine I tried to read, my mind kept wandering back to the week I’d just had. The incredible days of riding, the alien scenery, and the remarkable people I had shared it with. I concentrated on remembering special moments, trying to save them somehow, keep them sharp and close so I can pull them out at any moment. 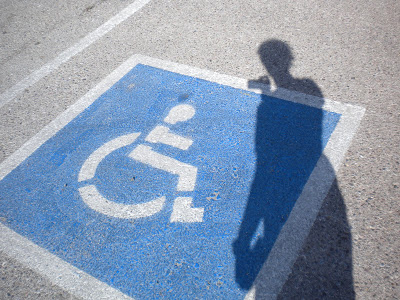