November 8, 2013 · by CycleChick · in The Campagnolo Experience, Travel 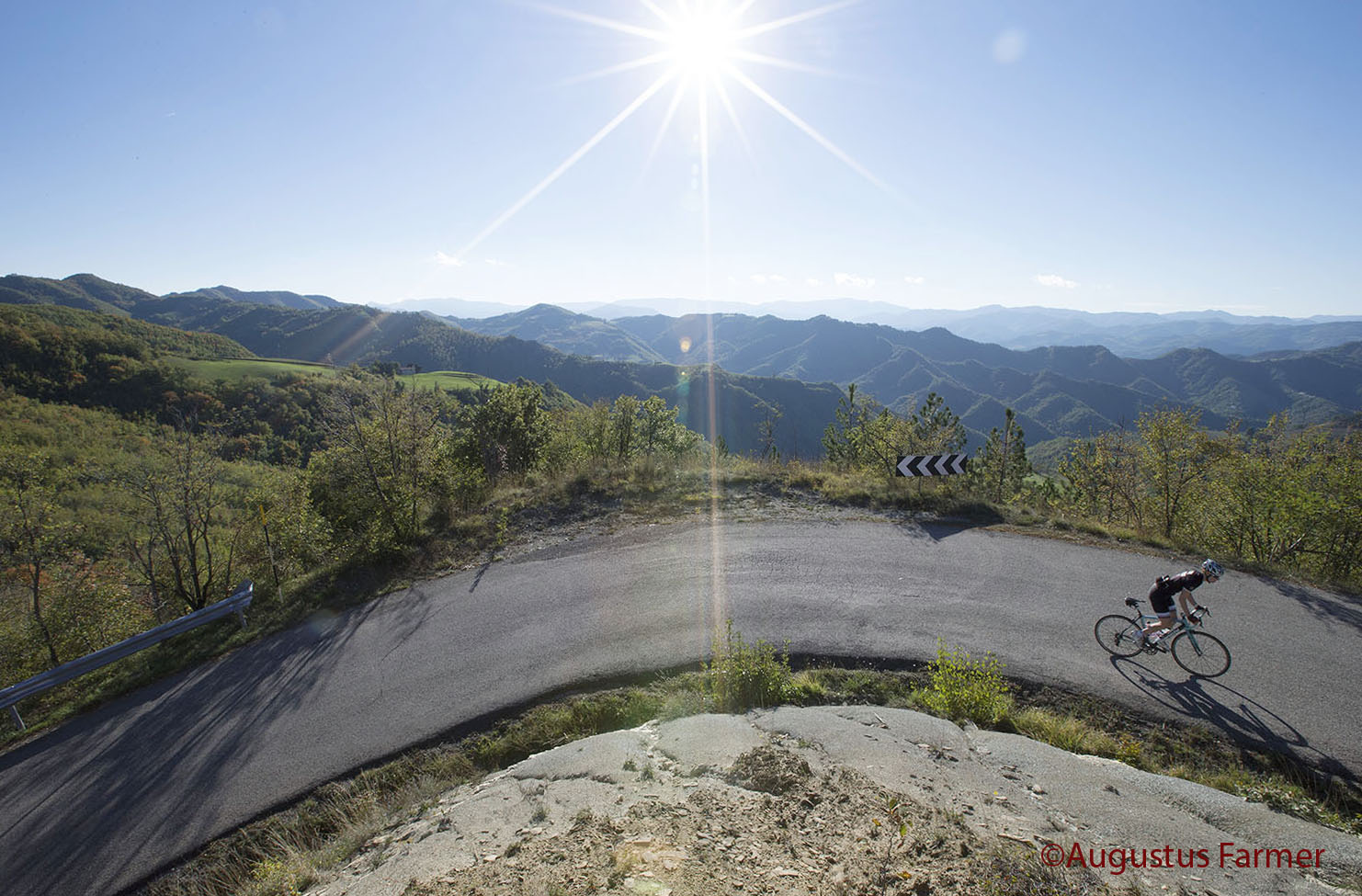 You may have been wondering (although probably not) “Hey! Where did that Winnipeg CycleChick go? Did she crash and fall off a mountain? Or run off with that sexy Italian guy?” The answer is no. I’m right here, back in Winnipeg – or, as I now like to call it, “Not Italy”. As you can imagine, the transition has been difficult. In comparison, the food here at home is crap, likely as a result of the terrible scenery, and when you ask for an ‘espresso dopio’ at the local Tim Hortons, they may or may not throw you out and threaten to call the police.

In any case, before the glorious climax of my final days with Thomason Bike Tours becomes a distant, sexy memory, here is the next instalment of The Great Winnipeg CycleChick Italian Campagnolo Adventure Experience™, a name I will be pitching to the fine folks at Thomson and Campagnolo. I think they will be all over it.

Without further adieu, or the Italian equivalent thereof, I give you Day 6. 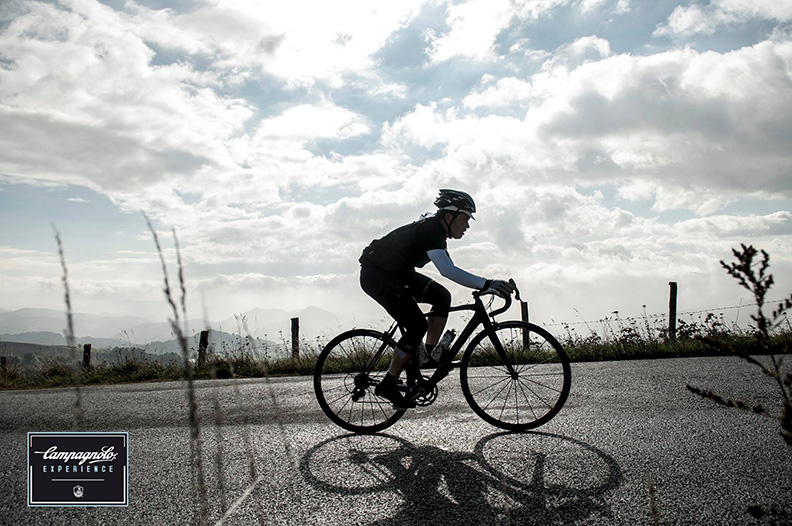 Back in 1970, a group of Italian cyclists decided to stage a bike race that would equal – or preferably crush into oblivion – a famously long and challenging one they had done that was put on by the Swiss. To do this, they picked the most difficult route they could find – a 200km traverse of nine cols in the heart of the Apennine Mountains. Legend has it that this new race, Nove Colli, or ‘nine hills’, inspired a group of Italian youngsters to take up cycling, including a certain Marco Pantani, who lived in a nearby town. Forty three years later, Nove Colli has become the biggest and most famous Italian bike race you’ve never heard of. With 13,000 participants winding their way through the narrow and undulating roads with white-knuckle switchback descents, it is likely the most exciting and terrifying as well.

While the race itself happens in May, the long and winding road it follows remains conveniently present all year long. So today, minus the 12,992 other cyclists and 50 euro entry fee, we will ride the Nove Colli. Or at least die trying.

At just under 200km and 3,800 metres (12,467 feet) of climbing, this was by far the most intimidating day on the itinerary. But unless I was to stay in Urbino forever (plausible), or ride in the van all the way to Faenza (out of the question), I was going to do it, one way or another. 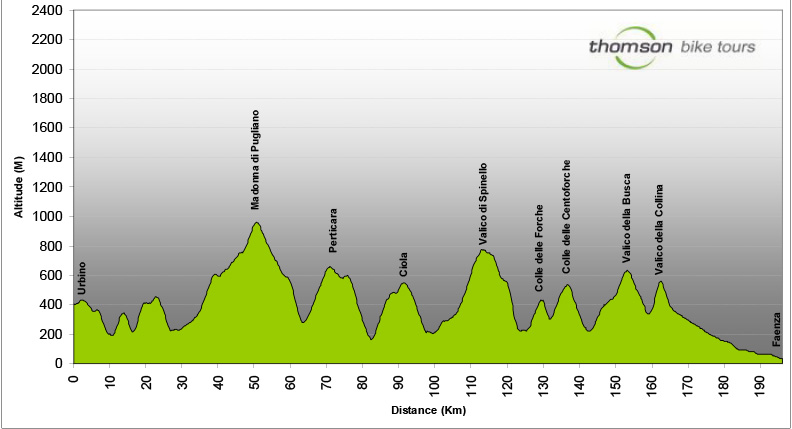 The first climb starts almost immediately. As is our custom, the group spreads out, each of us plodding along at our own pace. Sharon, an oncologist from Utah and the only other woman in our group, has impressed us all with her relentless determination. She is content to ride her own pace, and never takes the van unless the guides force her to, in the interest of time and safety. She is always smiling (unless they make her take the van). 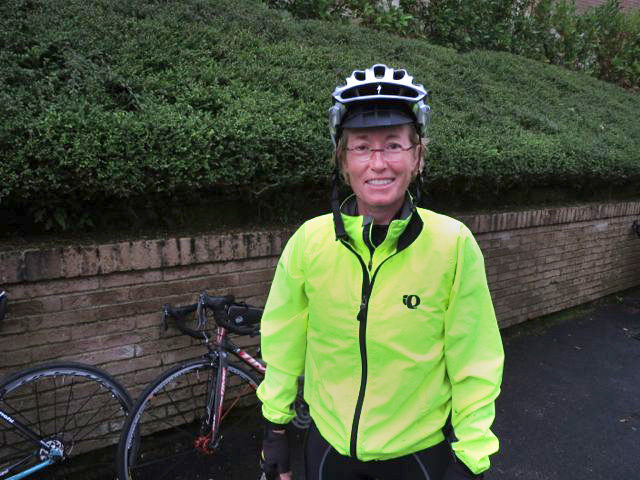 Near the first summit my bike starts to feel weird. It’s a familiar feeling specific to a soft rear tyre – the ass end of the bike seems disconnected from the front, sort of like those two person horse costumes, causing a rear waggle that is most easily detected on corners or fast descents when you crash onto the pavement with your face. Thankfully I make this discovery at the summit of the climb rather than halfway down the switchback descent at 60km/h.

No sooner do I stop to change the flat than the Super Ban appears! How do they do that?

Normally I insist on changing my own flats, but these tyres are a total bitch to get off. Plus, it’s not often I have handsome Spaniards following me around to offer mechanical assistance whenever I need it, so I let Pablo work his magic. When I suggest he might be more comfortable in his task without his shirt on, he laughs. Must be my Canadian accent. He dutifully checks the tyre and the rim, puts in a new tube, and I am on my way down the descent. 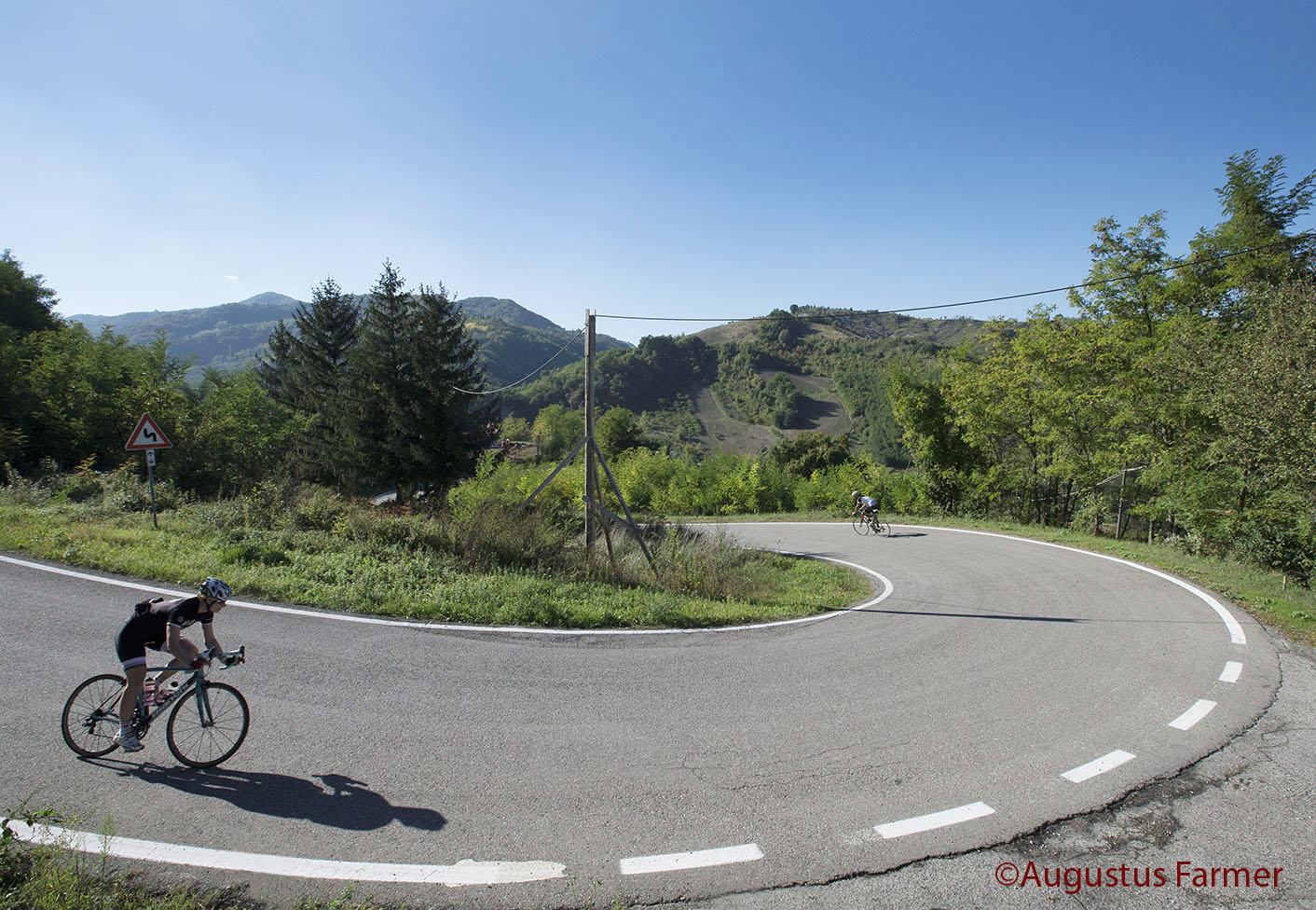 This is probably a good time to mention how much I love me some Campagnolo brakes. I don’t usually get all mushy about bike parts (ok that’s a lie), but these brakes moderate my descents like the sweet lips of an angel gently caressing the rims – completely silently and with no trace of shuddering, slipping or grabbing. In other words, these brakes are The Shit. 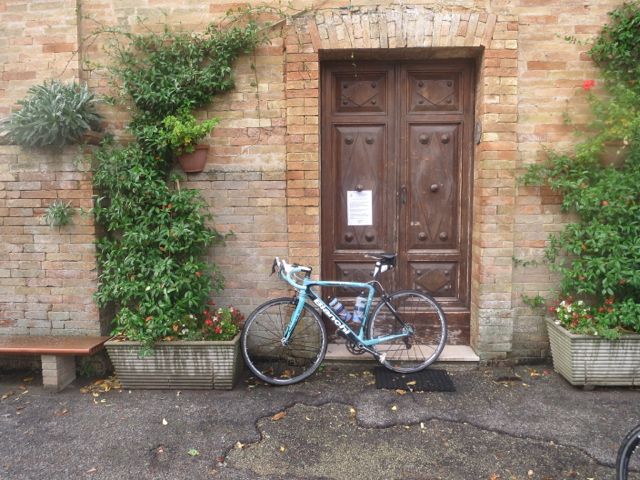 Halfway down the dreaded waggle is back, but this time it’s dangerous. If I stop, Jordi – who is too far in front of me to hear my pitiful calls for help – will have to climb back up the col, since my one and only tube was used on the last flat. I know the Super Ban will be at the last summit for a while waiting for the last rider. So I wiggle my way down the descent – knuckles white, and angel lips fully engaged.

At the bottom, Jordi is waiting. I tell him my tyre is flat again, and he gets to work with the change. Jordi does not love these tyres. I know this from the double flat two days ago. He is muttering under his breath and I strain to hear in the hopes of learning some cool new Catalan swearwords. But I am out of luck. Apparently “fuck” is pretty universal. 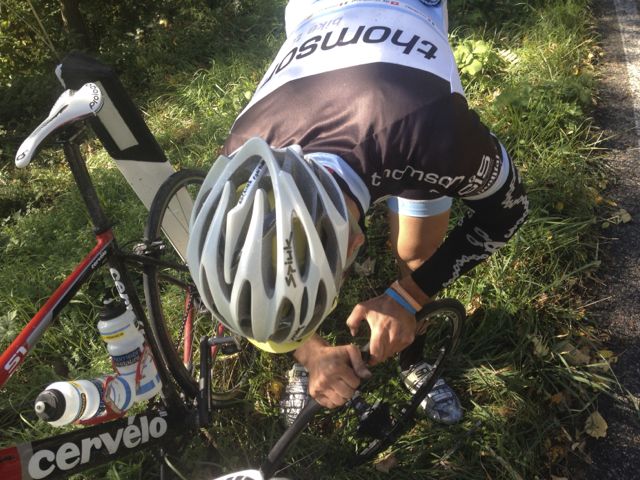 The air holds until the top of the next col, but the tyre goes soft again on the next descent. At the bottom we make yet another change, and Jordi decides that we will change the tyre at lunch, which is only about half an hour away. As we start rolling again, my chain snaps.

The Super Ban arrives (of course), a quick chain repair is done, and we are on our way to lunch. By now, the rest of the group is well ahead and enjoying the incredible countryside. 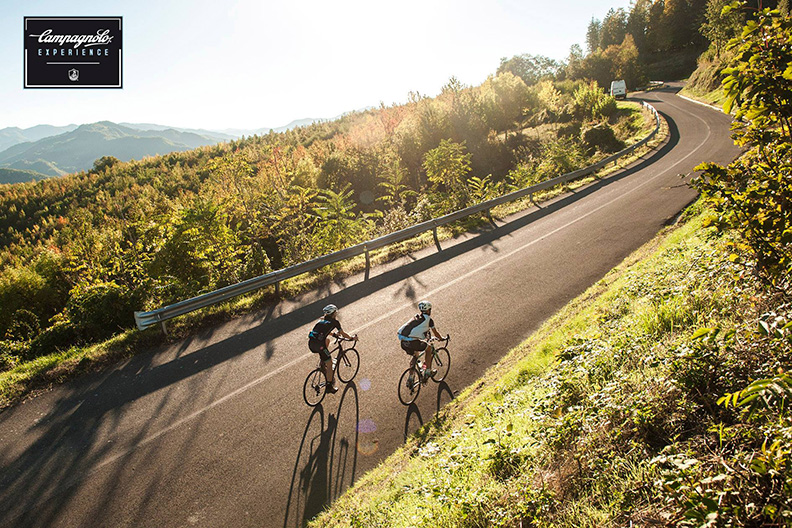 By the time we get to lunch, which is at a small patio in yet another (yawn) perfecty charming little town, all the other riders are about to leave. They offer to wait, but there are tyres to be changed and paninis to be eaten, and neither should be rushed. 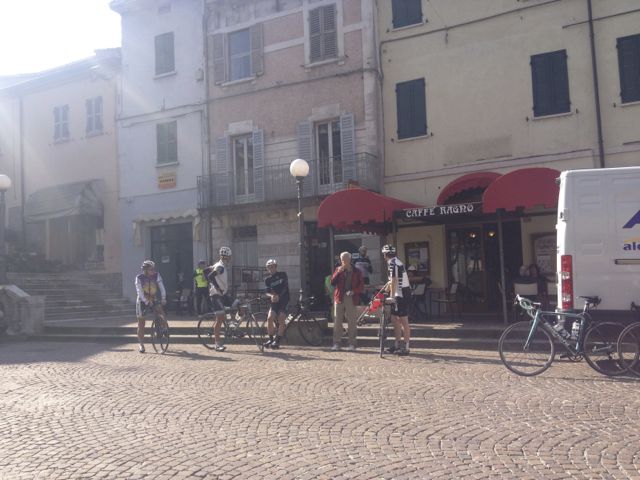 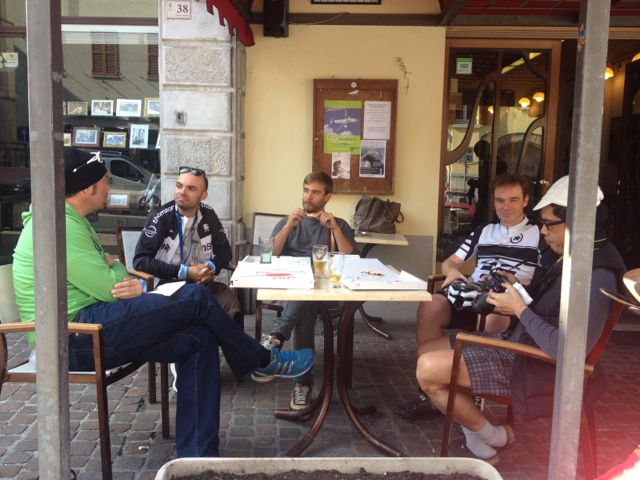 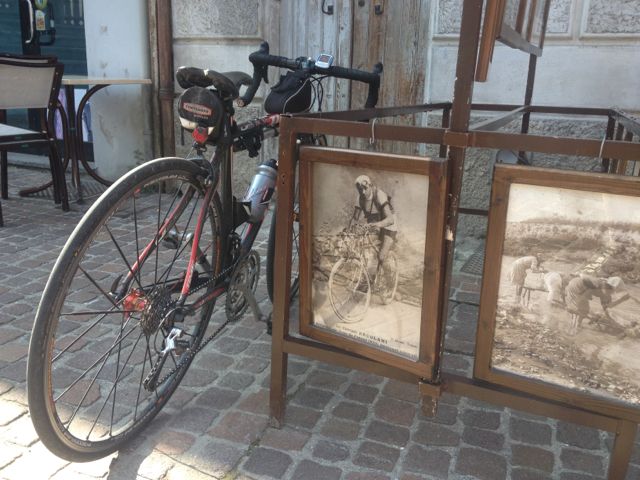 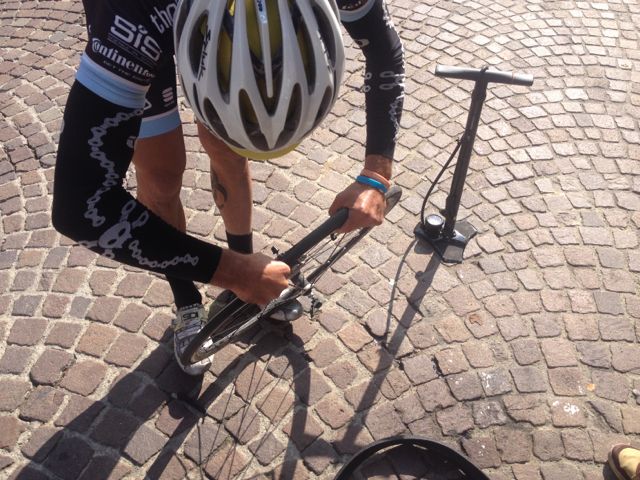 And so Jordi is stuck with me all afternoon as we climb, and then descend col after col. Some of them are ridiculously hard. Like 20% hard. Counting my pedal strokes isn’t cutting it anymore, so instead I follow Jordi’s wheel and match his pedal strokes. When he stands, I stand. When he sits, I sit. His cadence is smooth, and his upper body perfectly still, not like those drama queen pros who rock back and forth like drunks on a cruise ship. He admits to me he is finding this difficult. He usually likes it steeper. Yeah. Me too. 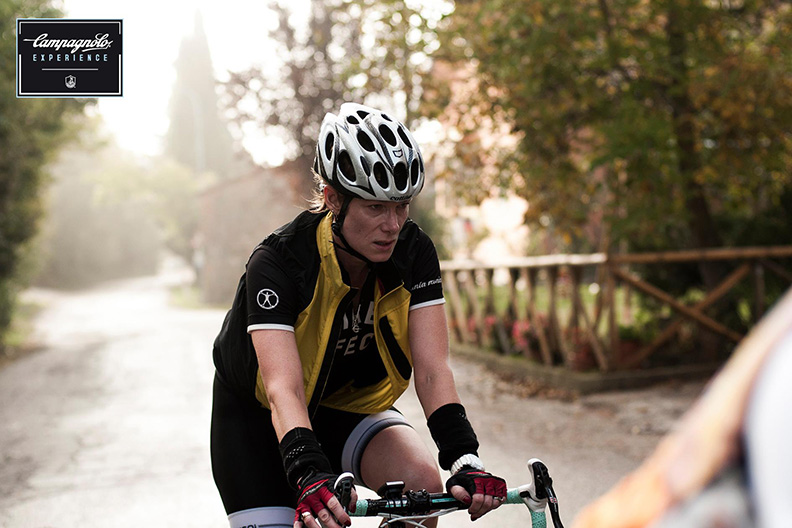 At some point I tell Jordi things would have to be really bad for me to get in the van. As long as I am physically able to ride, I’m riding. He says that’s good to know. We don’t talk much, but when we do it is about the things we know and love – our kids, food, and riding. I regale him with tales of Winnipeg winters, and try to explain how truly flat it is, finally showing him a picture I have on my phone from a training ride back home. He shakes his head and tells me if he lived there he probably wouldn’t be a cyclist. And I understand. 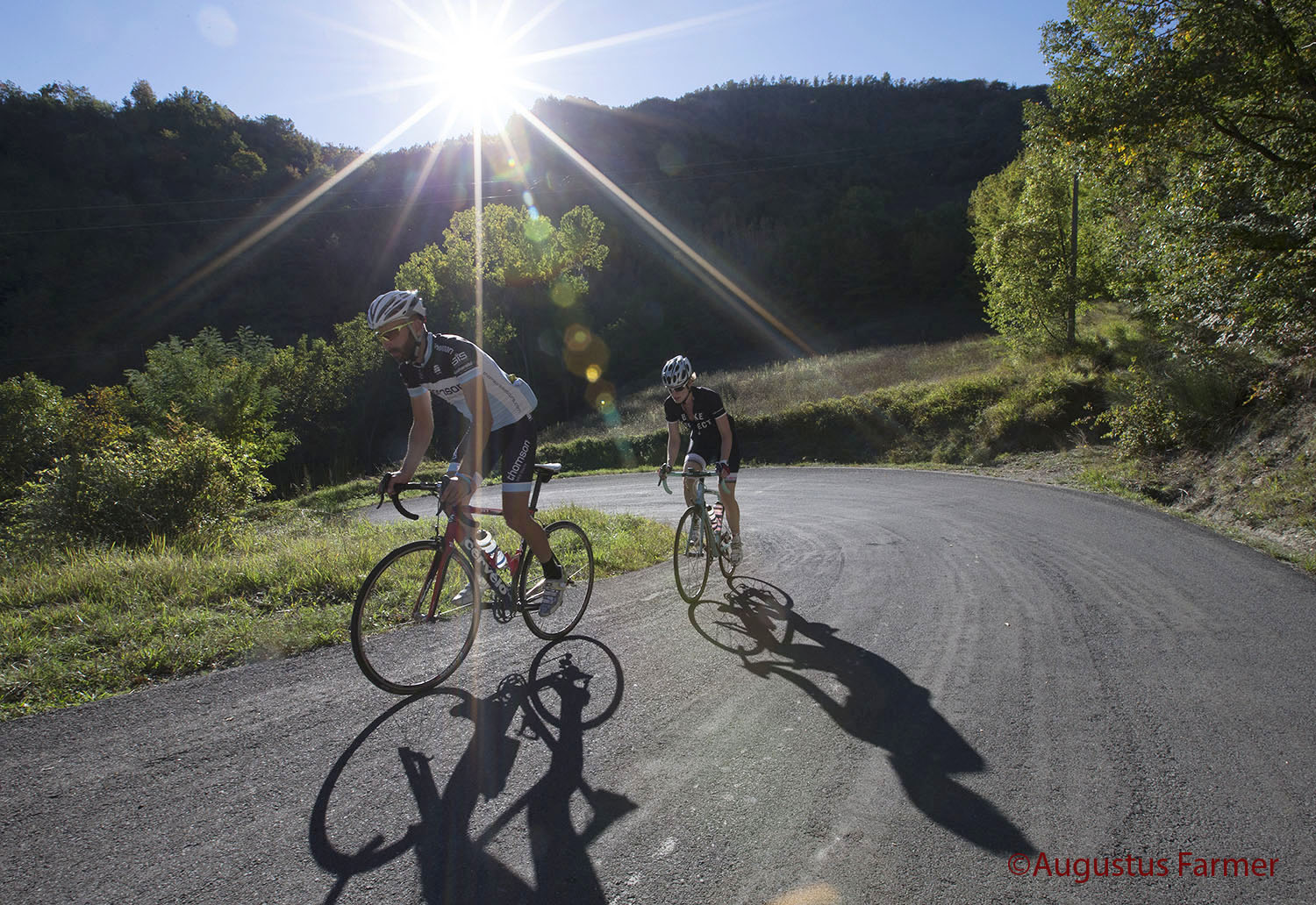 It’s getting late. We have two more cols to climb. The weather is perfect, and the sun is starting to set. This ride is breathtaking, both in the literal and figurative sense. The Super Ban follows us, stopping occasionally as Augustus spills out, scrambling to find the best vantage point to shoot us in the magical light.

I try not to vomit. 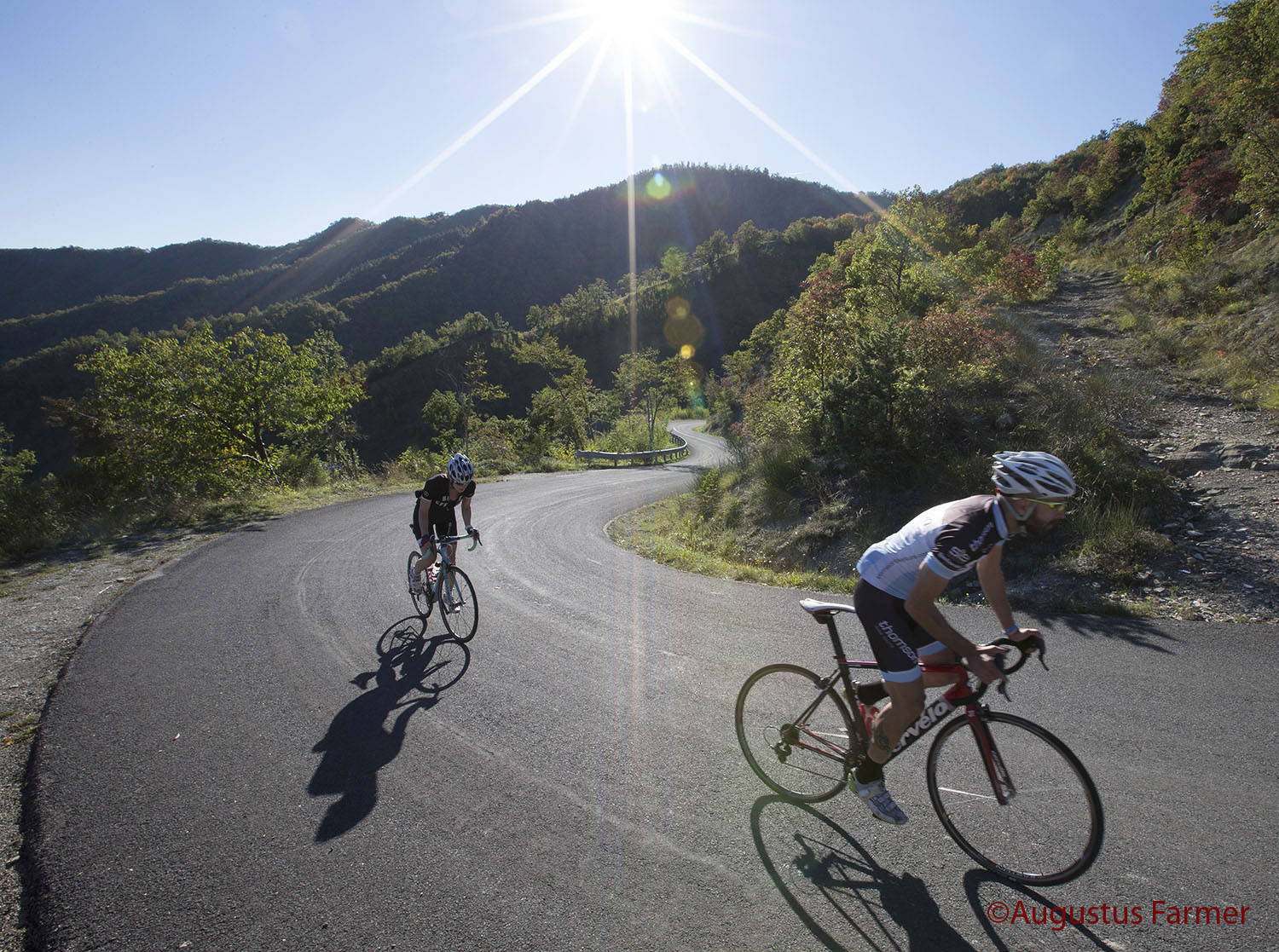 In the end we complete eight of the nine climbs. I am disappointed, but we lost too much time with the mechanicals and now it is getting too late to be on the road. So I have no choice but to put Nove Colli on my bucket list of unfinished business.

The Hotel in Faenza is amazing, but even more amazing is the restaurant. The owner is something of a cycling buff and the walls are lined with photos, old and new, of him with pros and other cycling celebrities. 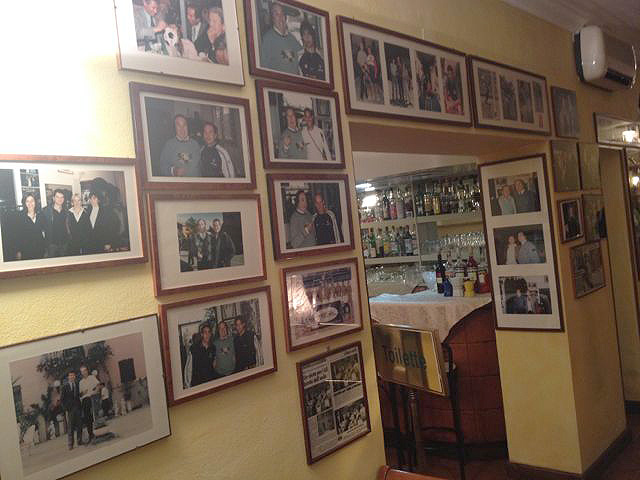 One in particular stands out. 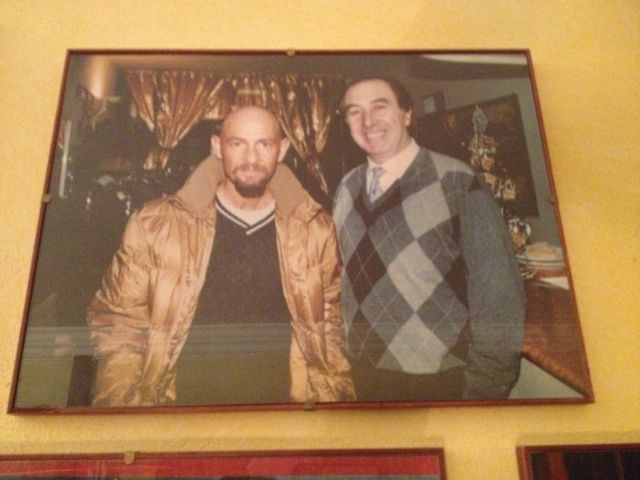 In spite of all of my mechanical issues, not to mention the sheer intensity of the riding we’ve done today, compounded with all of the other days before this, this has been my favourite day of The Great Winnipeg CycleChick Italian Campagnolo Adventure Experience™ so far. It has also been the hardest, and maybe that’s why.

I will remember this day forever.

Special thanks to Augustus Farmer (check out his great blog here) and Peloton Magazine, as well as Pablo and Thomson Bike Tours (the ones with the Campagnolo Experience logo on them) for the incredible photos. They tell the story far better than my words and crappy snapshots ever could.

← I’m Not Dead Yet
An Afternoon Ride in Not Italy →