A Bike Fit for a Princess

Last march I went to a week long cycling camp deep in the heart of the Arizona desert, far from the slushy crappy mess that is spring in Winnipeg. I had decided to rent a bike from the Arizonians, since the cost of shipping The Giant was more than it’s resale value.

In order to make the experience as crotch-friendly as possible, I brought my own saddle, which is yellow to match The Giant’s awesome paint scheme. I was also encouraged to bring my own pedals, but ran into some obstacles when trying to extricate them. Obstacle one was my baffling lack of a pedal wrench (all girls need a pedal wrench). Obstacle two was trying to unscrew them in the normal fashion (tighty righty, lefty loosey) which, I have since discovered, is not how pedals work. So the ever-chivalrous Hubby came to the rescue and took the pedals off of his bike and handed them over just in time for me to bolt out the door to catch my flight. His pedals are from a purple Bianchi he rode in the 1980’s until he was hit by a car and the bike was trashed. But he kept the pedals, which are, naturally, purple.

The rental bike was a cobalt blue Cannondale, which when festooned with my colourful components, looked like this: 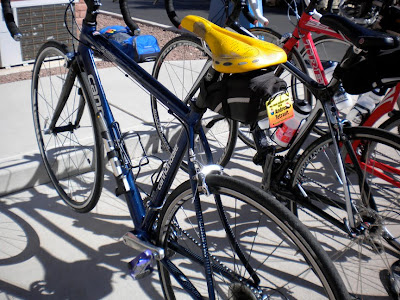 It goes without saying it was an abomination. It was also the origin of (thanks to my clever friend Michelle) “Princess Andrea and the Clown Bike” which amused my friends to no end.

In fact, it amused them so much that the quest began to find me the perfect Princess Bike. The first search was a joint effort between Scott and Ben over beer one night. The two of them laboured over the Trek website to create the perfect Project One Madone for me. I understand Michelle was quite instrumental in the process as well. The resulting custom Madone looked like this: 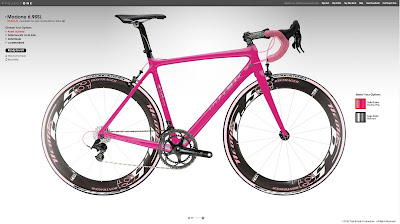 My friends are very aware of my allergy to pink and girly bike stuff and could not resist building me the pinky-est most Barbi-riffic bike on the planet.

It was Brian’s turn next. When I had voiced some interest in buying his beeeutiful Bianchi, he painstakingly adorned the bike with sparkly butterflies, flowers and hearts: 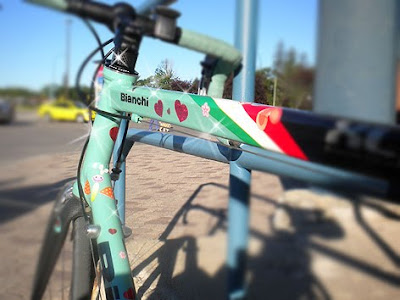 There are sparkly pink heart stickers mysteriously appearing on the seat posts and down tubes of everyone’s bikes to this day. Brian denies responsibility. I am skeptical.

As much as I appreciate the thoughtful efforts of my hilarious friends, I am pleased to announce that today I have found the quintessential Princess Bike. Behold: 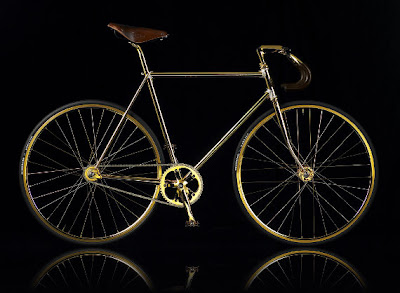 This beauty is the handiwork of Scandinavian design team Aurumania, and is described in lavish detail on their website:

These 10 limited-edition bikes represent a cornucopia of delights for any feinschmecker. The designers have employed all the classic principles in their overall appearance, and every detail has been under careful consideration.
Each bike is hand-built, and then plated with 24-carat gold and generously adorned with more than 600 fine Swarovski crystals. The handlebar grips are made of hand-sewn, chocolate-brown leather, and a moulded Brooks leather saddle provides exactly the right nostalgic touch. 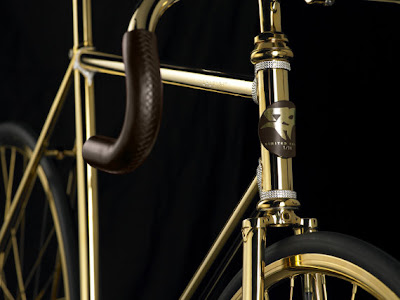 The price tag? Only $100,000, which for any feinschmecker (or princess for that matter) is a mere pittance. Apparently to ensure potential buyers the best possible degree of discretion, the bike is only available online (because the internet is the safest place on earth) and “delivered personally using a White Glove Service, in specially designed packaging that exudes extreme luxury on par with the golden bike inside.” Yes, very discreet. Just like a crystal studded 24 karat solid gold bike. I wonder how much it weighs…

In addition, you can order a special mounting rack, which will work perfectly for keeping the bike out of the way when the Suffer Den in my basement is required for the purposes of laundry. 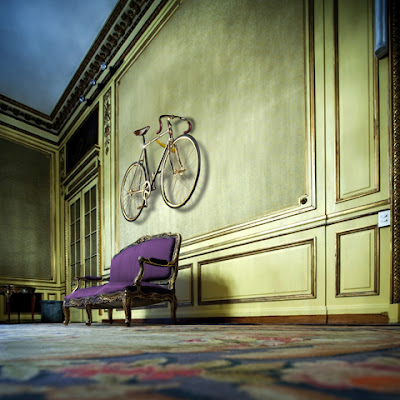 I just hope that if I order now it can be delivered in time for next year’s cyclocross season.

← Saint Malo and the Stairway to Heaven
Cross-Tastic this Sunday! →